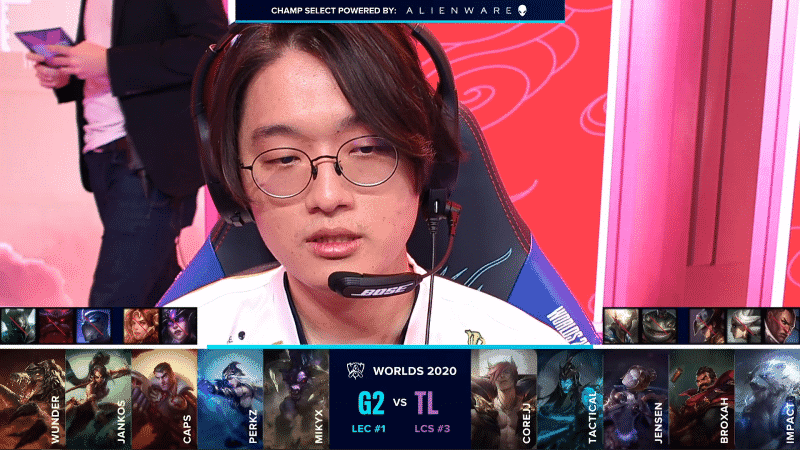 This was the game of the tournament for Team Liquid (“TL”). After a great Play-In stage, they’ve faltered in Groups and an upset against G2 was required. For G2, they would be looking to be the only Western side to go 3-0 in the early stages as they looked to show they’re a side to be feared. TL got the perfect start as they late invaded the G2 jungle to not only steal away the red buff but get a First Blood kill onto Jankos. TL took their early lead and started to fall into their usual map orientated style. With a 2k lead on the board at 12 minutes, the game slowed down as G2 looked to farm up. Critically, TL always kept up the pressure at this point.

G2 get themselves on the board at the 17th minute as they pick up two kills in the mid lane. In addition, they translate that into a second Rift Herald pickup. TL maintained a 2k lead, though G2 now had a scent for blood. It’s a bloodbath in the bot lane as G2 chase down Impact with TL reengaging they win a four-for-three overall as they secure the Soul point drake as Jensen becomes the standout carry for TL as they found a win condition. With G2 chasing down TL on the top lane they fail to make the play as TL turned it around and down four members of G2 as they claimed an easy Baron with the Soul drake spawning in just a minute.

TL posture around the Soul drake as they picked it up easily. Jankos tried to get into the pit to steal it but he’s too late, with G2 engaging after him Perkz is stuck outside of the fight and TL picked up an easy bot lane inhibitor as they find themselves 8k ahead and in full control. G2 pushed to make the play to try and win the game but TL shut it down. They keep the dream alive for NA and themselves as they find a win to get revenge for MSI 2019.

Games Inbox: Is the PS5 launch line-up better than Xbox?