Ham’s Sandwich Shop by Japanese designer Kengo Otsuka is just about to finish up its funding period on Kickstarter. Backers have until January 20, 2022 to make a pledge. The project has already received more than $15,000 against its roughly $1,000 goal, so the board game is about 1,800% funded, but you can still buy in early for some great perks.

Otsuka previously worked on Giri Giri Curry which was all about “adding ingredients in an attempt to try and make the best tasting soup, meat, vegetable, or seafood curry.” The designer is back with another game about food.

Ham’s Sandwich Shop is a game for two or three players with each run taking around 30 minutes to complete. The premise is pretty amusing. “There is a small house on the outskirts of town,” the handbook says. “It is a sandwich shop run by a hamster chef. The kitchen is very busy with chefs snacking and recipes changing all the time. Will he be able to make a delicious sandwich?” Your job as the player is to “become an apprentice chef and work with the hamster chefs to complete your sandwich!”

The rules involve placing toppings like lettuce and tomato onto pieces of bread. You earn gold stars by finishing a given recipe, but the hamster chef will “happily dive on the bread,” devouring your toppings. But sometimes the chef takes a break. The first player who manages to collect three gold stars becomes the winner. 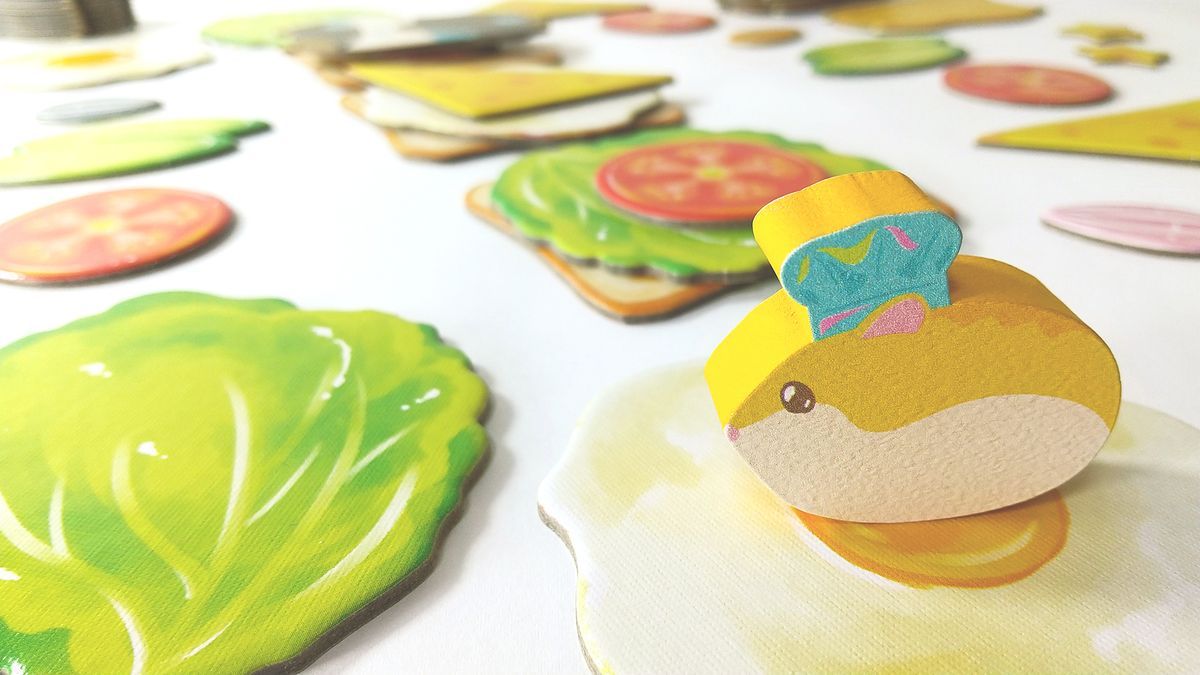 “The game is played by moving the pieces on the topping tiles arranged in a circle forward one to three steps, acquiring one of the topping tiles and stacking it on top of the desired bread. The recipe changes depending on where the pieces stop and when they match the recipe, you can declare the sandwich finished. When the sandwich is successfully completed, the player is awarded a gold star. The player who collects three stars wins. In the middle of the game, a hamster chef tile can dive onto the bread, but only the person who placed the tile knows whether the chef is working or snacking.”

Perks include a wooden piece inspired by the photography of Taira Hamster whose “hamsters with strange movements are the talk of the town.” You can follow Taira Hamster on Twitter and Instagram. The piece was “modeled after the adorable Ponko.”

Ham’s Sandwich Shop is already in production and expected to ship at some point in March or April. Delivery to backers outside of Japan is currently scheduled for May.

It Looks Like Sega Is Releasing A Dreamcast Mini

Breath of The Wild 2 Needs To Finally Introduce Playable Zelda