Pacing is one of the most important aspects of a Dungeons & Dragons game. It’s also one that can challenge Dungeon Masters the most. The end result should be different for every group, adjusting to the kind of stories the table wants. That said, the general idea is a pace similar to that of a television show or movie. Bombastic action scenes should be spaced between funny surprises and dramatic character moments. This time I want to take a look at how one can use playing cards to encourage deep character interactions.

This little interaction is called the “Fireside Chat,” and I learned of it from Youtuber Dael Kingsmill. The basic premise is to take a moment when the party is traveling to have a revealing conversation. That said, the name doesn’t have to be followed exactly. It would be great for the interaction to take place around a fire in the quiet wilderness, but it could also happen after drinks at the tavern. You know, that moment when the festivities are dying down and people get reflective. 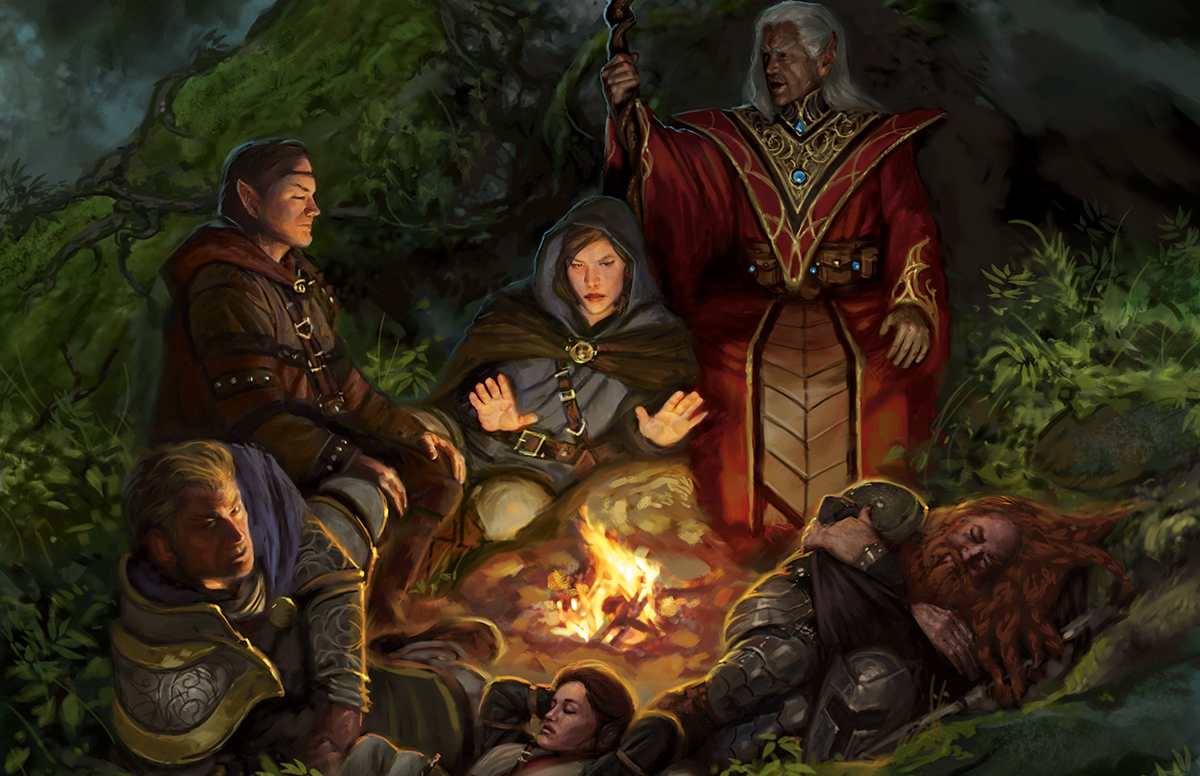 If a player elects to take part in the game, have them draw a card. Having a real deck always helps with immersion, but there are online card draw generators.

Those who draw are then invited to share a campfire story based on their card’s suit. The card draws goes according to this rhyme: a story of love, a story of pain, a story of loss, a story of gain. Heart is love, club is pain, spades is loss, and diamond is gain. The players can make up a story about their character’s life, or something they’ve heard.

As you can probably already imagine, there are countless possibilities for creativity for both sides. As the DM, you don’t have to make the cards an actual part of the exercise. Or you can double down on it and have the mysterious stranger be a recurring NPC like a fortune teller. Maybe the campfire stories actually portend a future event.

As for the players, this encounter encourages them to think about their characters on a deeper level. Most D&D characters have some story of loss at the ready, but what about gain? Or love. Maybe the player will come up with something amazing on the spot, like the embarrassing story of their barbarian’s first kiss. The story doesn’t even have to be about them. Maybe the bard gets a chance to actually do the bard thing and share a folk song from their culture.

Overall, the Fireside chat is a fantastic way to ramp up the D&D roleplay. Combine it with actual ale (at your table’s discretion), and the stories will flow.

After 61 Deaths And 45 Hours, Someone Finished The Last Of Us 2 On Permadeath Mode

Godfall Review: Here Is The Generic Launch Game You’ve Been Waiting For