When you think of any FromSoftware game – in this case, Elden Ring – you think of the deep lore that the writers have crafted, you imagine beautifully nightmarish creatures that roam the lands, and you recall the tragic fates of many an NPC or enemy. To sum it up, it's rarely ever happy thoughts. However, playing any of these games, especially the first time, makes for quite a funny spectacle. The player character's fate – mostly likely a stupid death – and the player's reaction would even make Radahn laugh.

It's with this insight perhaps, that an official Elden Ring manga has been launched, with a comedic angle to it (via Famitsu). Elden Ring: Road to the Erdtree is based on the original story by FromSoftware, but is told in the form of a gag reel. The Tarnished encounters the same nightmares as we have in the game, but rather than remaining the silent protagonist, reacts and behaves in the same way a first-time player would – scared and confused. You can read the first two chapters for free on Comic-Walker.

"Aseo, a poor, Tarnished wretch, finds himself cast out into Limgrave—naked, penniless, hopeless, and maidenless," reads the summary for the manga series. "His only hope in his harsh, unforgiving new home is a mysterious woman named Melina. She urges him to follow the guidance of grace to the Erdtree that looms over the Lands Between. But it won't be an easy road; a cast of colorful characters awaits Aseo along the way—Patches the Untethered, Blaidd the Half-Wolf, Margit the Fell Omen, Godrick the Grafted, and of course, Ranni the Witch…With little but a loincloth between Aseo and certain death, he strikes out for the first stop on his quest: Stormveil Castle. Will he make it there, or will his journey end before it even begins?" 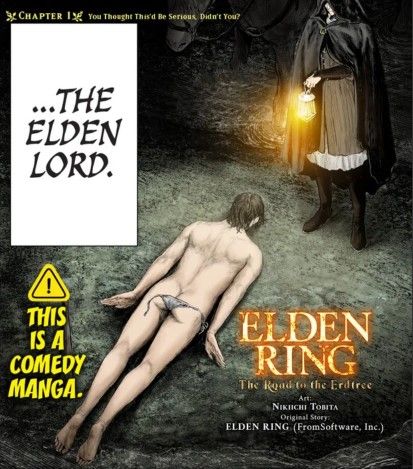 It seems Bandai Namco is going all out on the Elden Ring books. Only two days ago we reported that a set of two art books, with a total of 800 pages, are now available. Volume 1 will cover concept art of locations, NPCs and armour, while Volume 2 will contain that of enemies, weapons and items.