Square Enix’s MMORPG Final Fantasy 14 has become boundlessly popular over the last few years. After the latest Endwalker expansion, there are a whopping 20 total combat jobs in the game. The Astrologian, added during the game’s Heavensward expansion, is a healing job that uses planispheres, star globes, and cards to both attack and heal.

Weapon choice is an important decision to make in the true endgame for Final Fantasy 14: glamours. While some items are harder to acquire than others, the grind is almost always worth it for some of the best-looking weapons in the game. 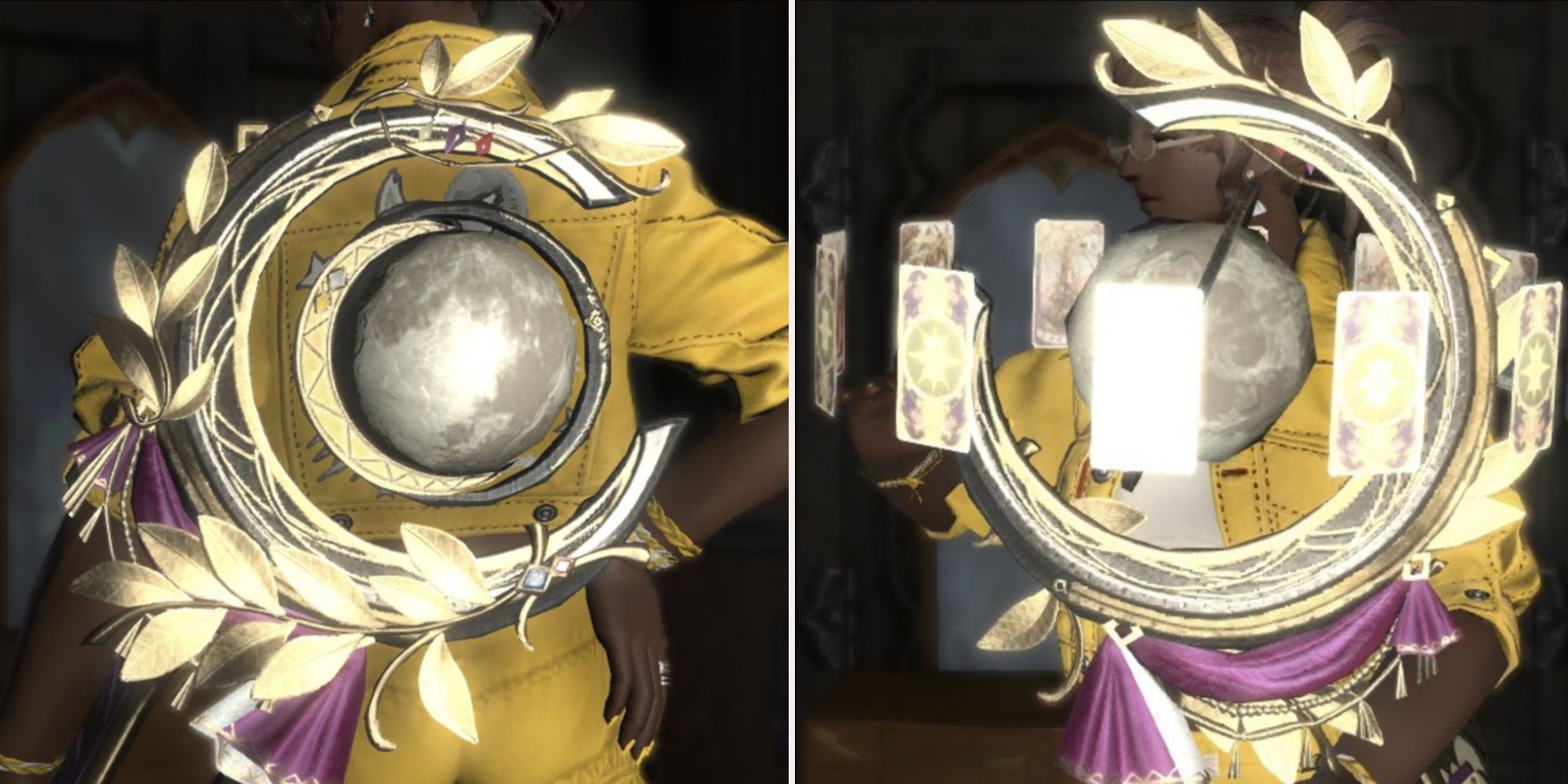 Not every single Astrologian weapon looks like a globe, but this one sure does. Diana seems to be a model of the moon, spinning with a ring around it, and another half-ring rotating around both parts to hold it in place. The leaves on the outer ring are beautiful, melding a muted gold to a structured silver stripe.

If you know the events of Endwalker – or even briefly watched the trailer – you’d understand why the moon is a big deal here, and the Astrologian using it to channel both destructive and regenerative magics is both beautiful and thematic. As a part of the artifact gear, this one is easy to get. 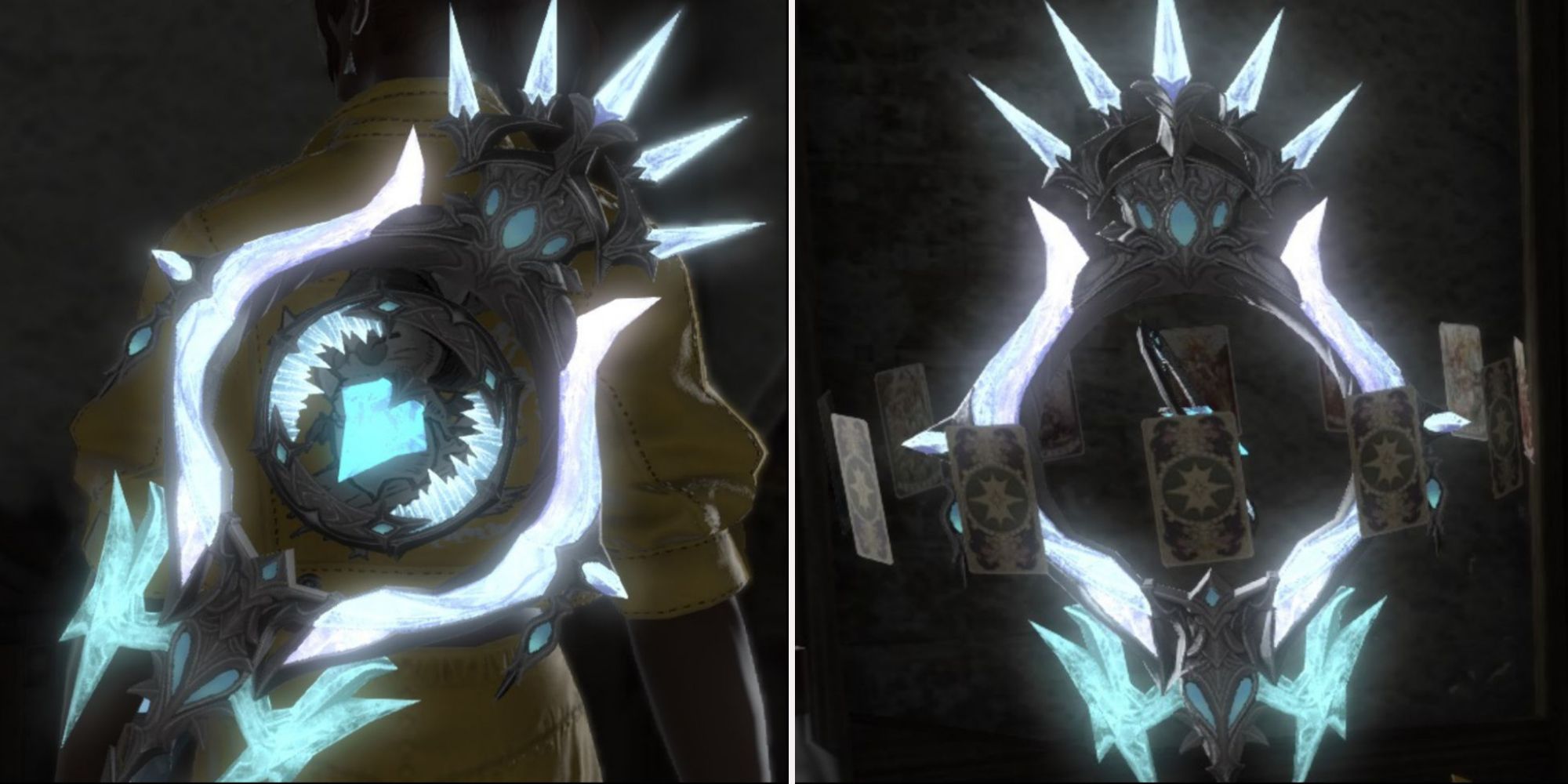 With a blue and white colour scheme, this Astrologian weapon is sharp visually. It’s also sharp literally, in the sense that half of the thing appears to be made of crystal. With four piercing spikes at the top and two at the bottom, this weapon could just as well be used as a physical tool to attack as well as a casting conduit.

The gentle way the light blue crystal glows is gorgeous, and this effect persists regardless if the weapon is unsheathed. The angular, rotating crystal at the center provides an interesting focal point, as well as the tooth-like, jagged crystals at the sides. 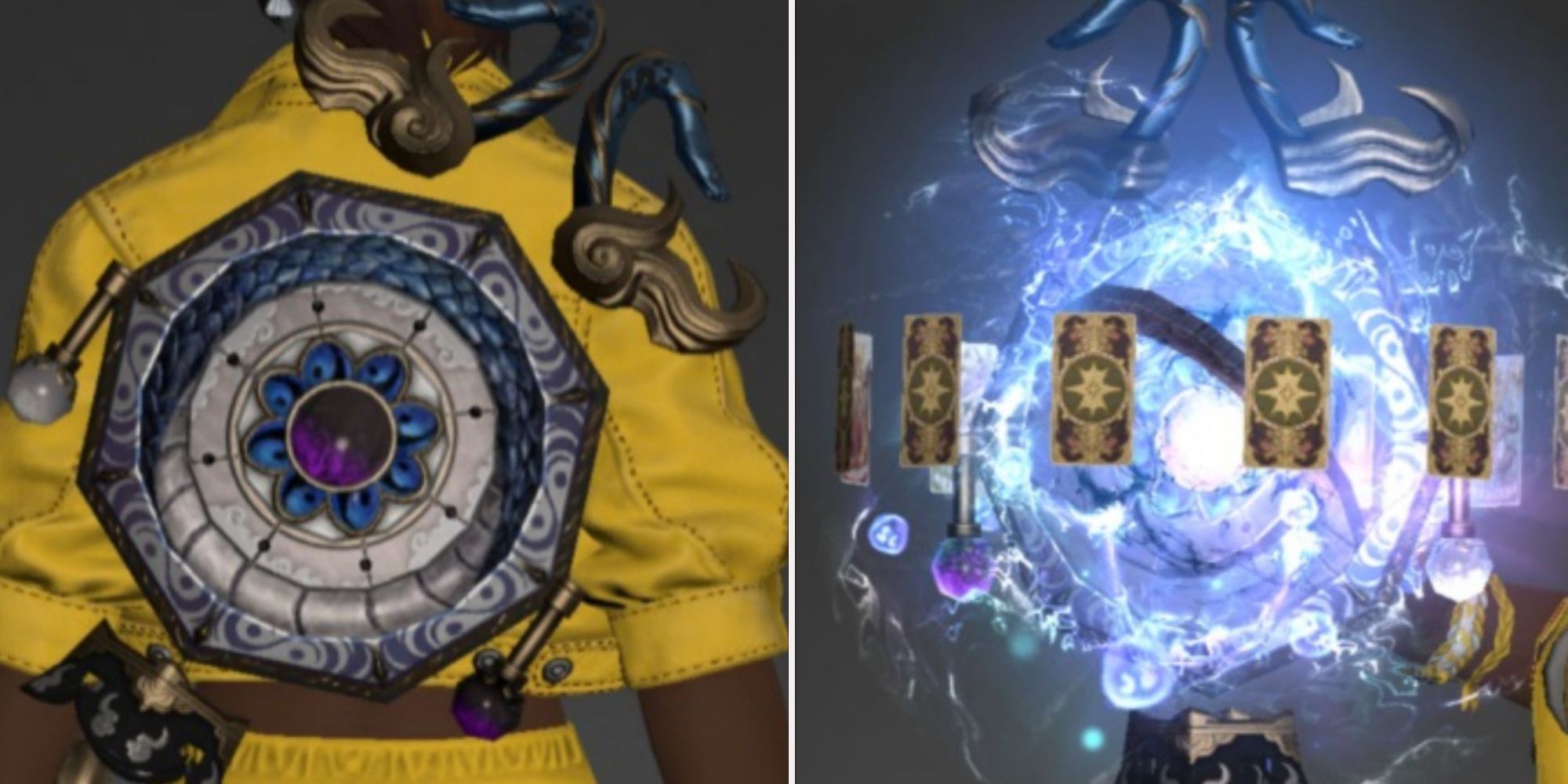 Sheathed, this weapon almost looks like a very detailed dinner plate. It even comes with a stand at the top, winged bronze, and blue woven metal pieces. Unsheathed though, the weapon comes to life.

Two of the inner rings spin around the center orb of light on a pattern, crossing every second. The outer frame rotates as well at its own pace, and on top of all of it are particle effects, bubbles, and waves of blue and purple light swirling. It’s a phenomenal display, one that comes as a surprise compared to its inert state. 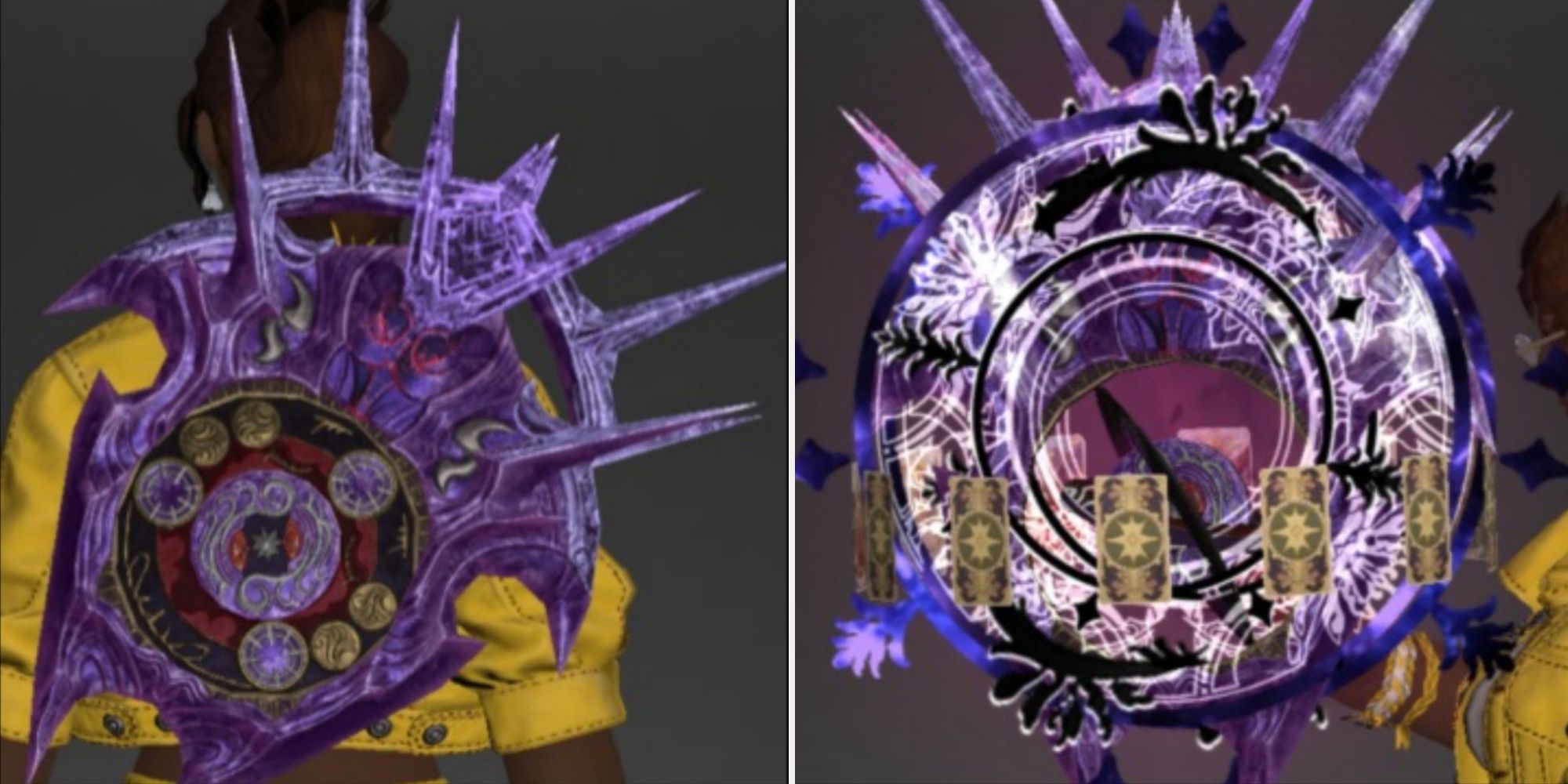 If you’re a fan of purple, then this may be the weapon for you. The entire thing looks like it could be used as a piercing tool, and when wielding it the whole face spins. There’s a small section at the center that has a ring that rotates around a metal plate, but the highlight of the weapon is the runes.

There are white engravings that rotate beneath even further black etchings, and the entire weapon is framed by a violet ring. The markings are intricate, and also glow despite the ominous, faint purple miasma around the entire thing. 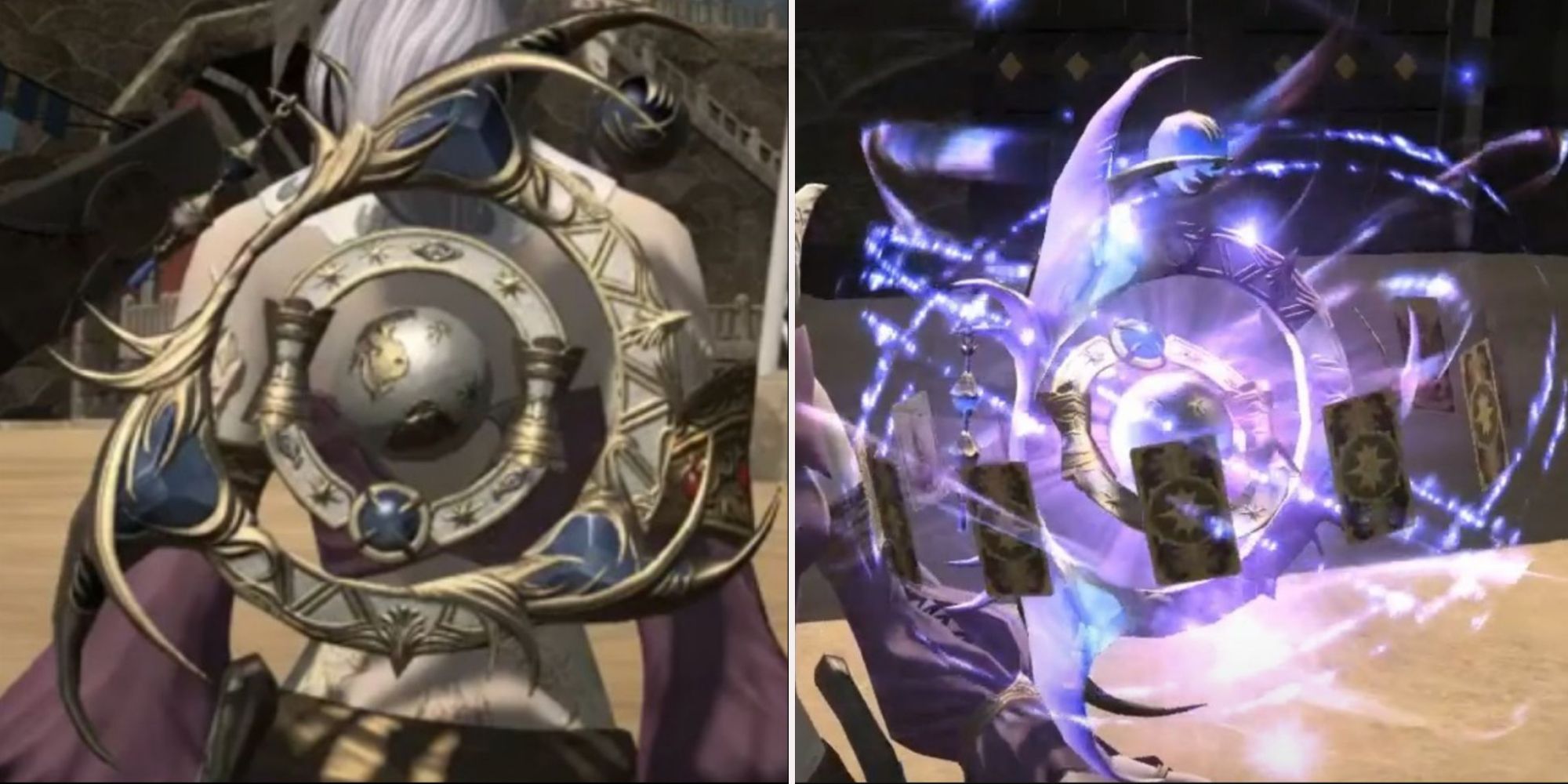 Relic weapons are unique in the sense that they all require quite the grind. The Eureka relic in particular needs you to do an awful lot of legwork within Eureka, an optional area that contains some lovely-looking items if you can stomach the time sink.

Provided you put in the effort, you get a lovely, regal-looking silver, gold, and blue Astrologian weapon. The atomic model style rings ebb between purple and blue. The entire thing is smaller than some other weapons, but it’s chic despite this. 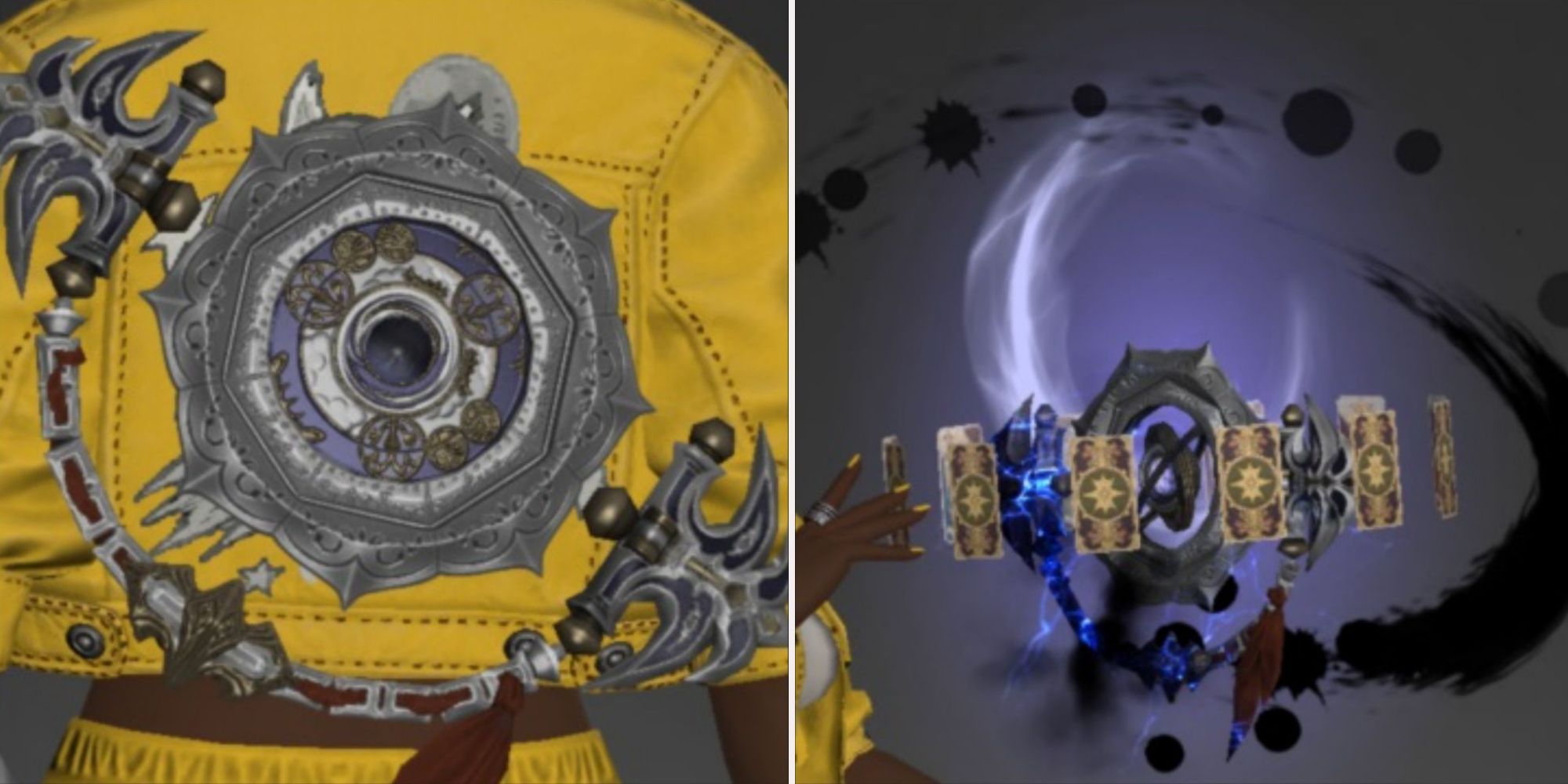 Astrologian weapons seem to be fond of pairing blue with silver and gold, and this one is no different. What sets the Byakko weapons apart is their particle effects. As soon as you wield this tiny weapon, a white ring appears just above it, spinning.

There’s a lightning effect at the bottom of the weapon, crackling, but the true star here is the black brush strokes. There’s a series of ink splash dots and a streak that paints itself along the edges of the weapon, darkening and fading on one side before appearing again on another. 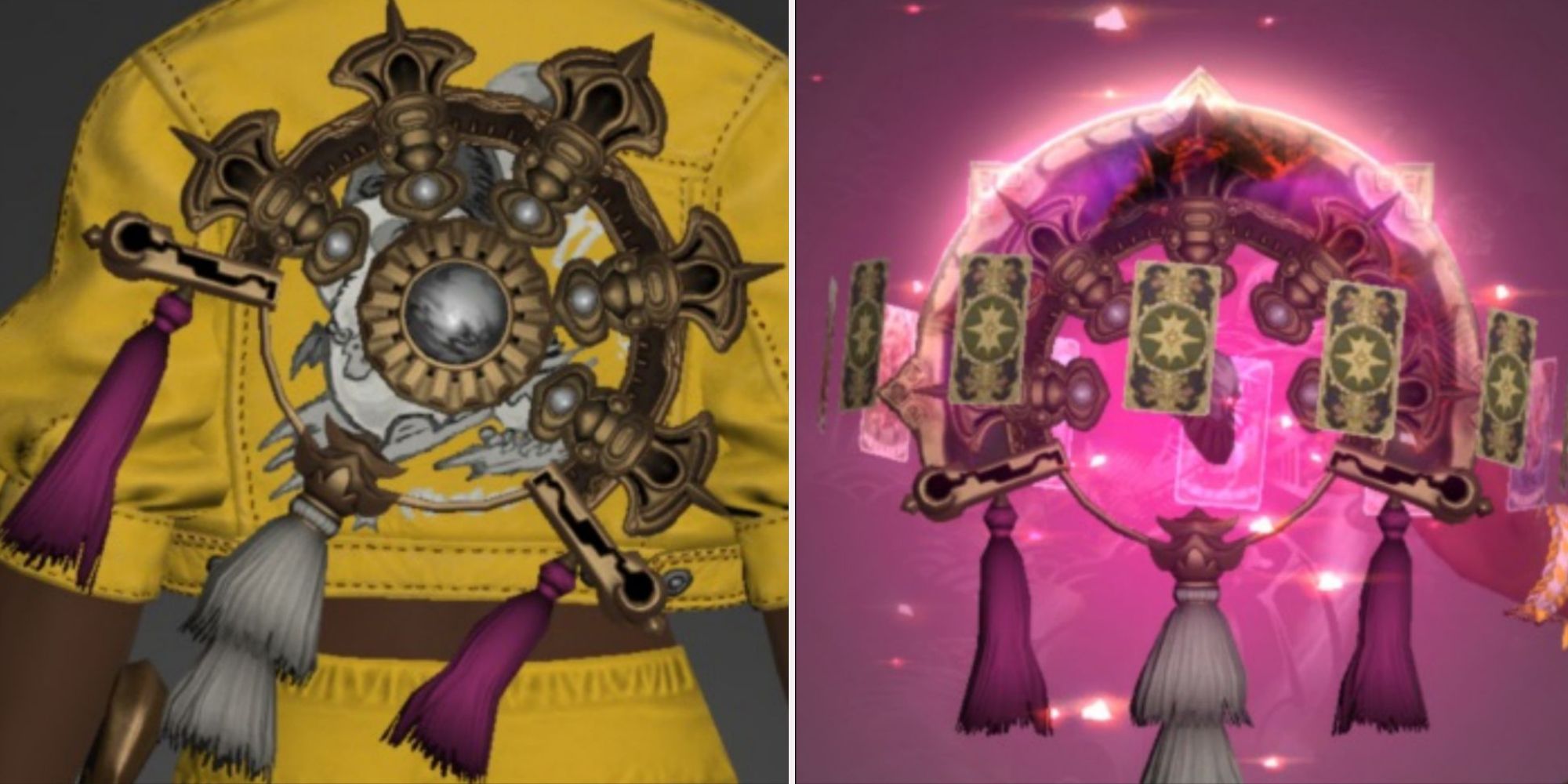 Even sheathed on your back, this weapon looks like a fan. The model for this weapon is striking in gold, pink, and white. There are five small protrusions from the center arc and a white, circular part at the center of all of them. It’s also quite small, but makes up for what it lacks in size as soon as you see the effects.

Those five points all connect to form a fan edge as soon as unsheathed, pulsing red, purple, and white. The entire thing sparkles with these red triangles and moves as though you are wielding an ornamental fan. 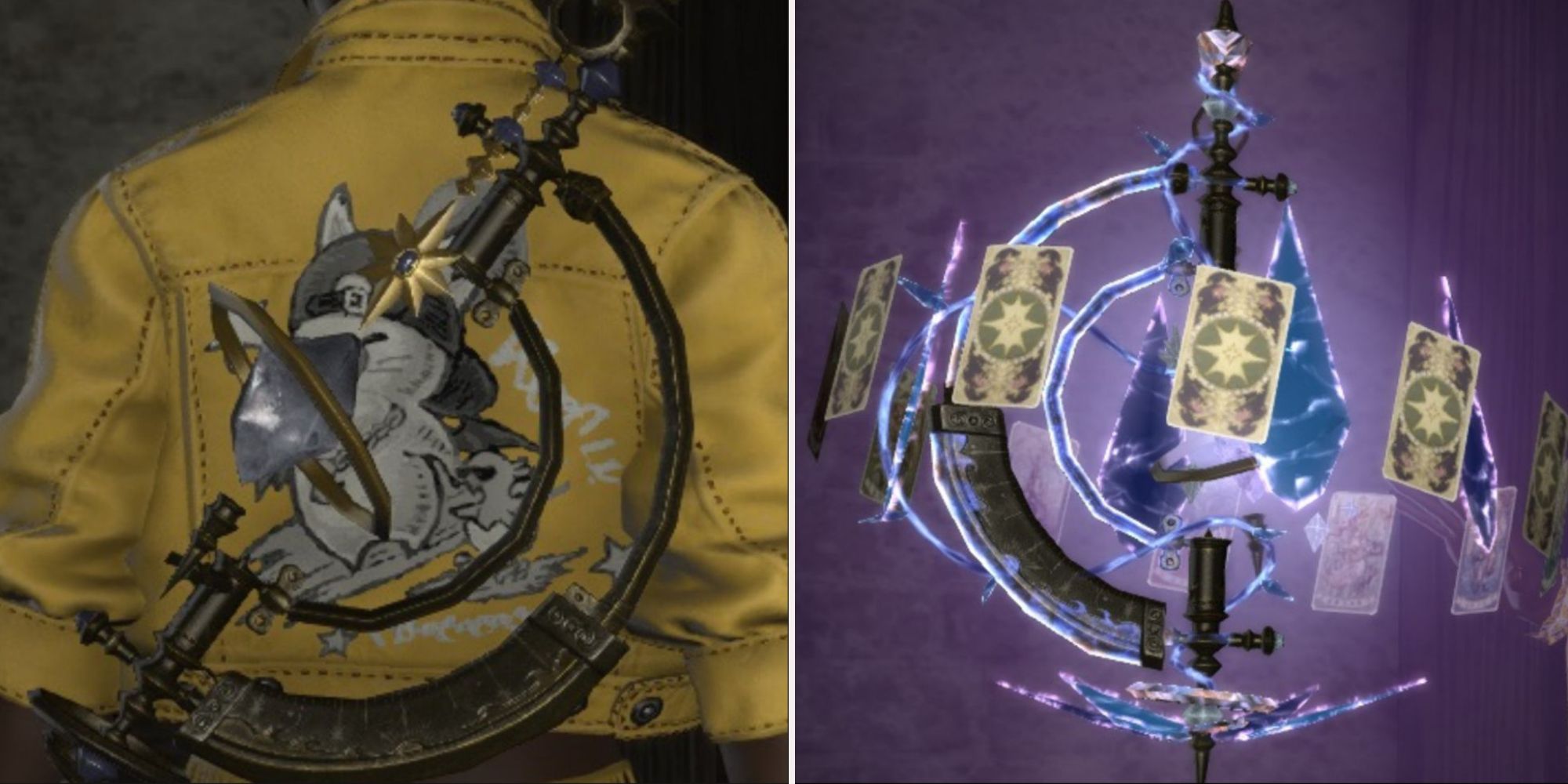 Here’s the most recent relic weapon, from the Shadowbringer’s expansion. It’s a half globe of sorts, with two half rings on the right side and a center crystal with – you guessed it – another ring around the center.

It’s almost unassuming in appearance until it's active. While wielding the weapon, the device almost looks like a chandelier. Four blue crystals line the outside of it, a bloom of further ones point at the bottom, and vine-like details ridge the entire inner structure. The weapon has a purple aura around it, making the different shades of crystal blue pop. 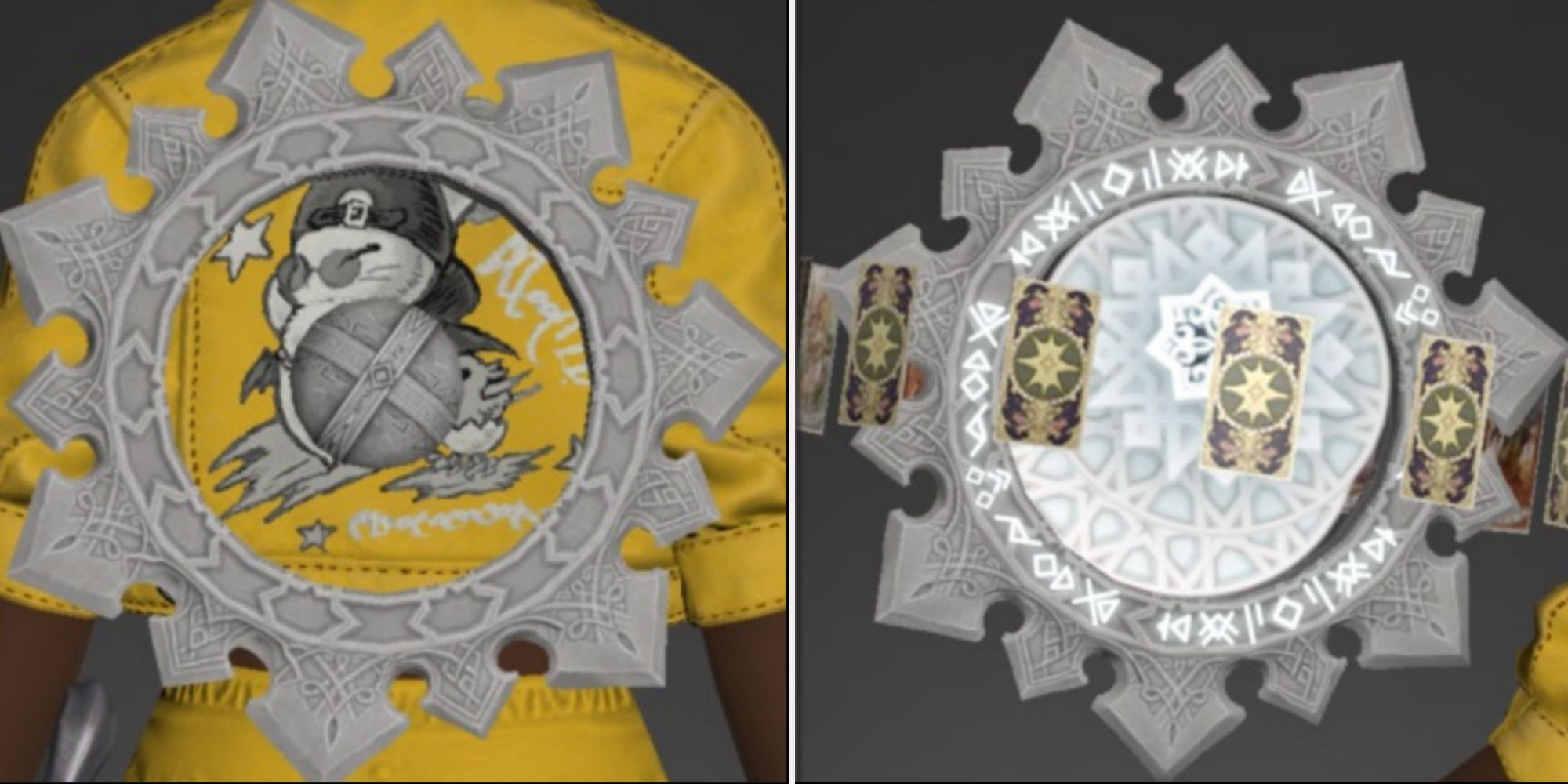 While this Astrologian weapon requires beating the last of four of the current tier’s Pandaemonium savages to even get a chance at a chest, it’s a beautiful piece of gear. The entire thing looks like a sculpted snowflake, and the pure white surface means it dyes beautifully.

The runes that run along the inside are bright white, and the entire thing rotates in time with the gorgeous planes in the center. This is easily one of the prettiest Astro weapons available right now, and it’s not as untenable to reach as the Ultimate weapons are, though this one is one of the hardest to acquire on the list. 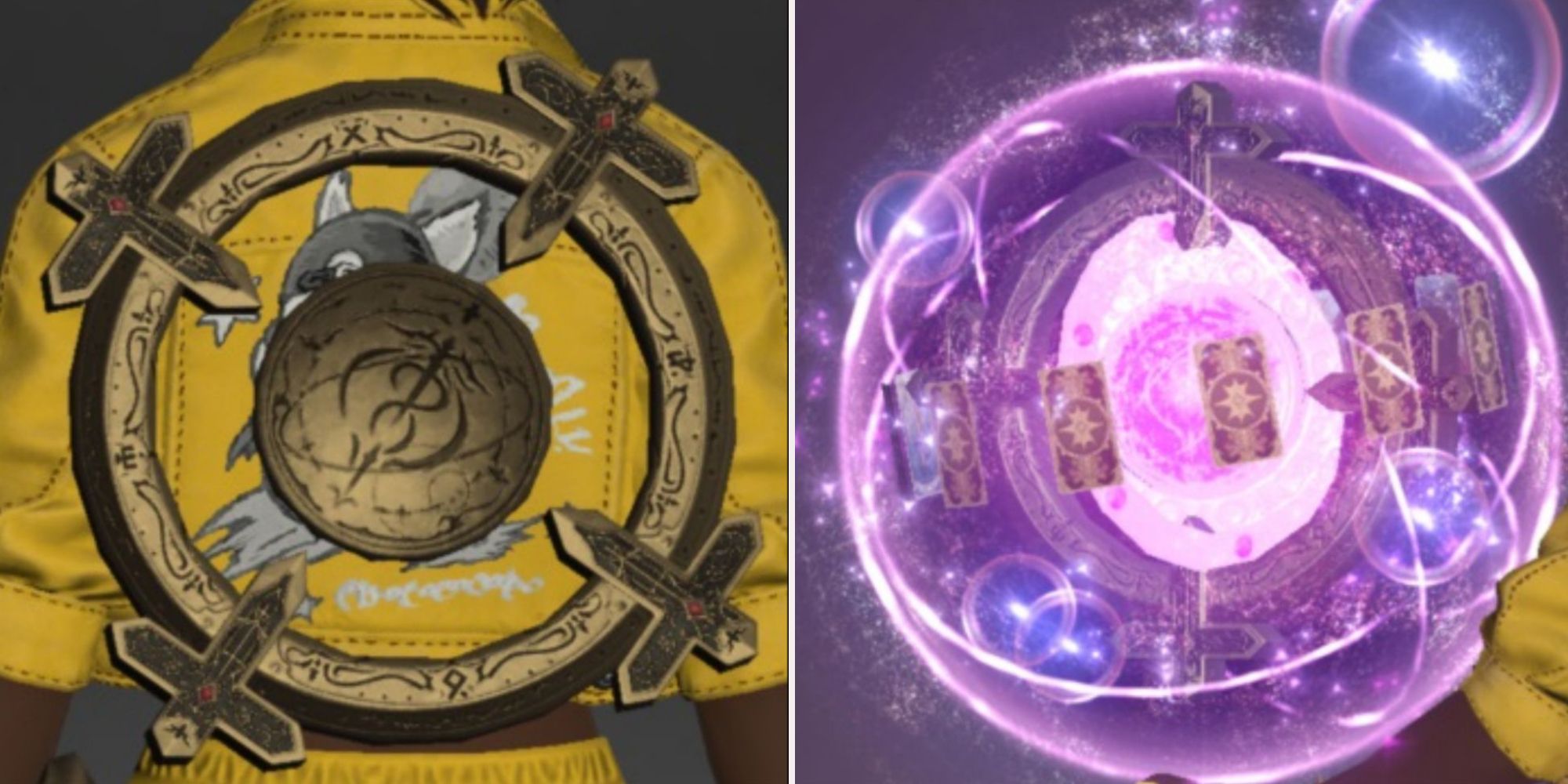 Another relic weapon tops our list, and for good reason. This weapon is bronze, with a singular ring and a large circular plate at the center. Four ‘t’ shapes edge the intercardinal shapes of this model, and black etchings line the face. Once unsheathed, the entire weapon comes to life in vibrant pink, making a solid bubble.

The inner face turns an even brighter pink, glowing and twirling at the center, and even more orbs line the outside of the aura, turning the weapon into a gorgeous glowing light show. It’s easy to see why fans call this one ‘the gumball’, and it’s one of the most striking Astrologian weapons in the game.