Guilty Gear Strive's final DLC character of the year is finally here with Happy Chaos. This gunslinging broken messiah is the founder of the Backyard and the original teacher of magic to humanity. As a result of how incredibly out of control and mighty Happy Chaos is, he is undoubtedly one of the most complex characters to play in Guilty Gear Strive. Even when compared to the preceding character, Jack-O'.

Still, Happy Chaos offers a wide range of attacks at his disposal and is a devastating character in the right hands. While it will take some time to get the flow of his moveset down, once you do, it will be hard to put the character down and will be equally as hard for your opponents to put you down. 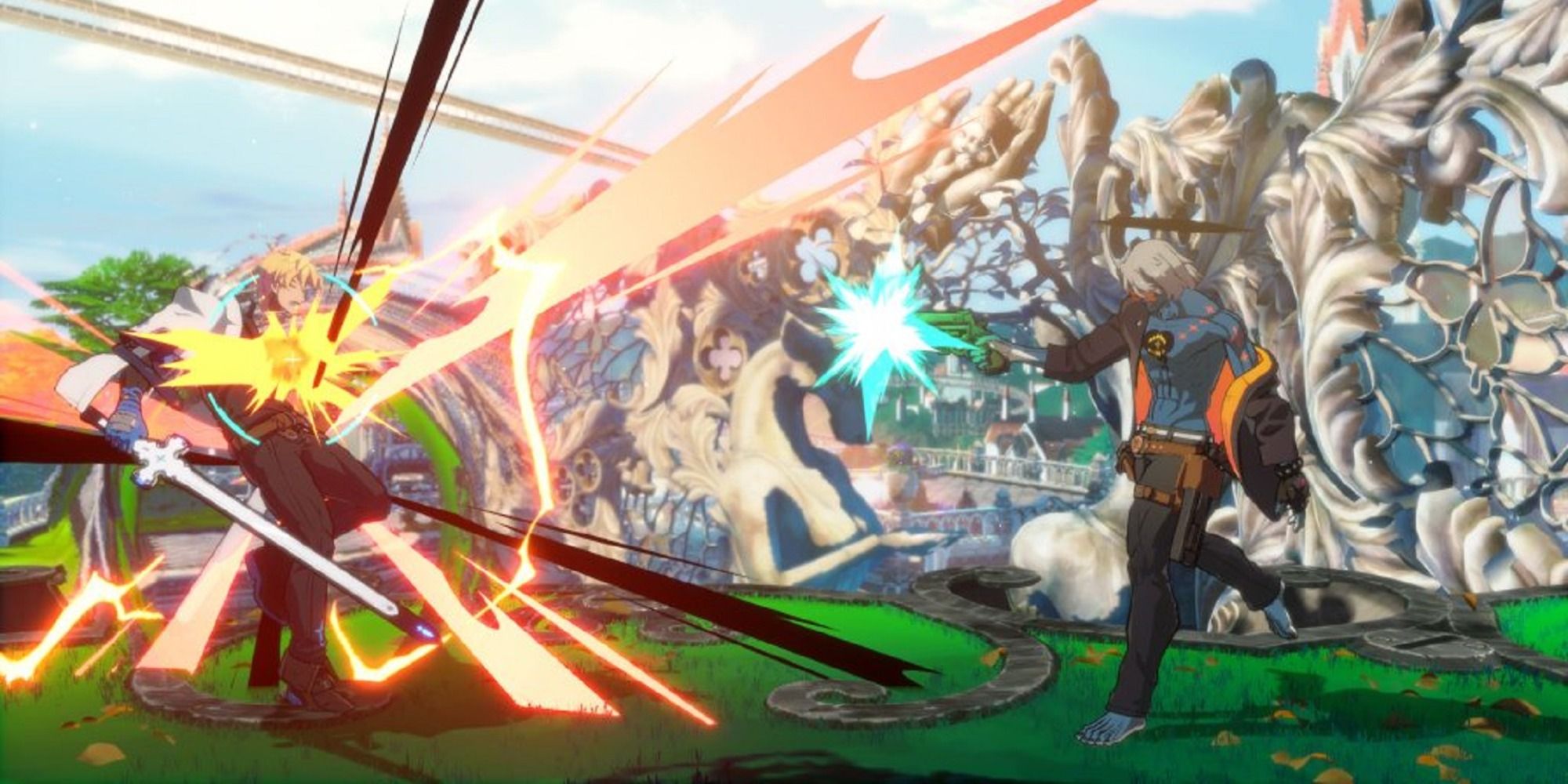 Happy Chaos' main draw is his large revolver, which can take a bit of getting used to before you can really appreciate its power and absurd potential. One of the most important things of note when using the gun is understanding that the bullets are technically not projectiles, negating most of the anti-projectile moves in the game.

Not only do the bullets ignore any sort of anti-projectile move, but they also do a decent amount of damage for a "poke," which will give you pressure from range, allowing you to try to work the opposition into a setup. Not only that but reloading the gun is quick and relatively safe if you create enough space between you and your opponent beforehand. 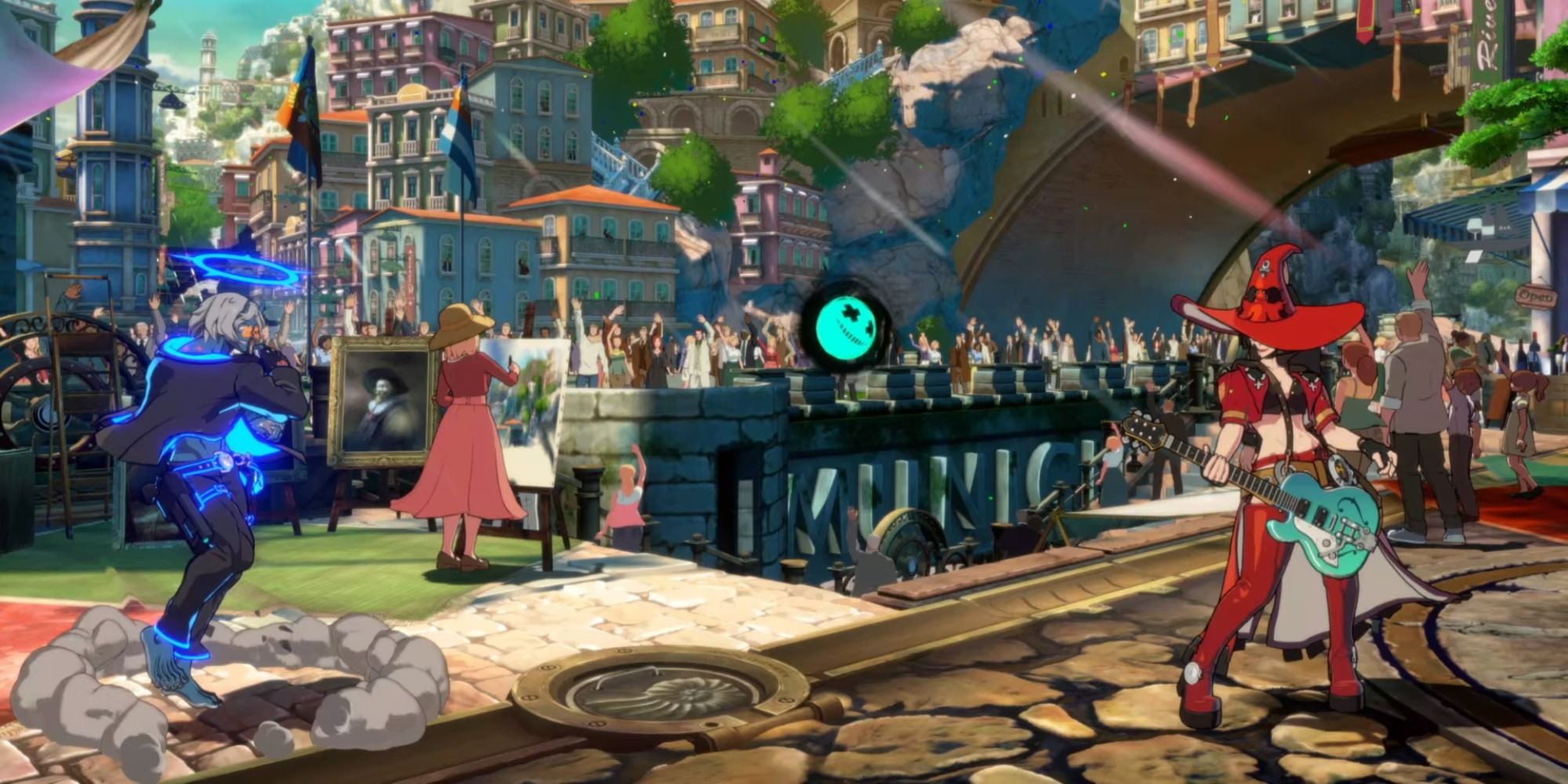 One of Happy Chaos' other unique abilities is applying the Curse status effect on his opponent by throwing an unblockable vial at them, coating them in a strange liquid, making it easier for his gun's reticle to stay on the target. Cursing your enemy should be mixed into your gameplay whenever possible as it is one of the most helpful abilities in your toolkit.

The Curse effect will last for five seconds, giving you a much-needed buff to your accuracy, allowing you to consistently hit more shots and even use it to your advantage to set up attack combos. Once you get the hang of the timing of the Curse ability, you will be able to execute it frequently throughout the match, giving you an enormous advantage over the opponent. 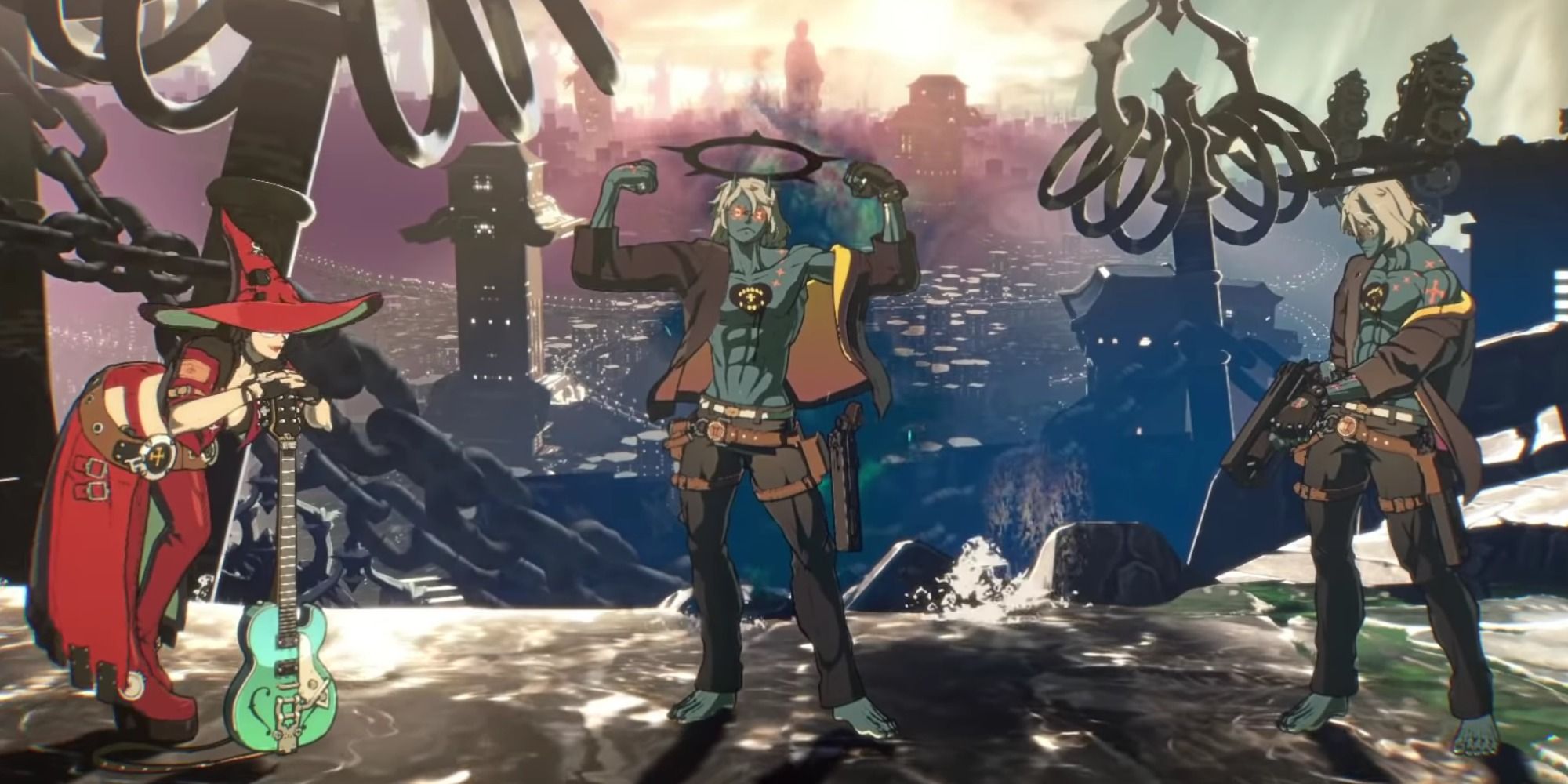 When using Happy Chaos' "Scapegoat" ability, you might notice that it costs a bit of your health to summon one of them into the arena. At first, this may seem risky or even a tad useless. However, Scapegoat is such a strong move that it pretty much needs to take some of your life as a means to balance itself out.

For example, your clone will absorb precisely one hit from the opponent, no matter your positioning on the arena. So, suppose you are standing in front of your clone and get hit by a wide strike that connects with both you and the clone. In that case, your clone will still absorb the hit, and you will negate the damage completely, allowing you to capitalize on the situation immediately after. You will be able to use these clones to your advantage both offensively and defensively, so long as you pay close attention to the state of your health. 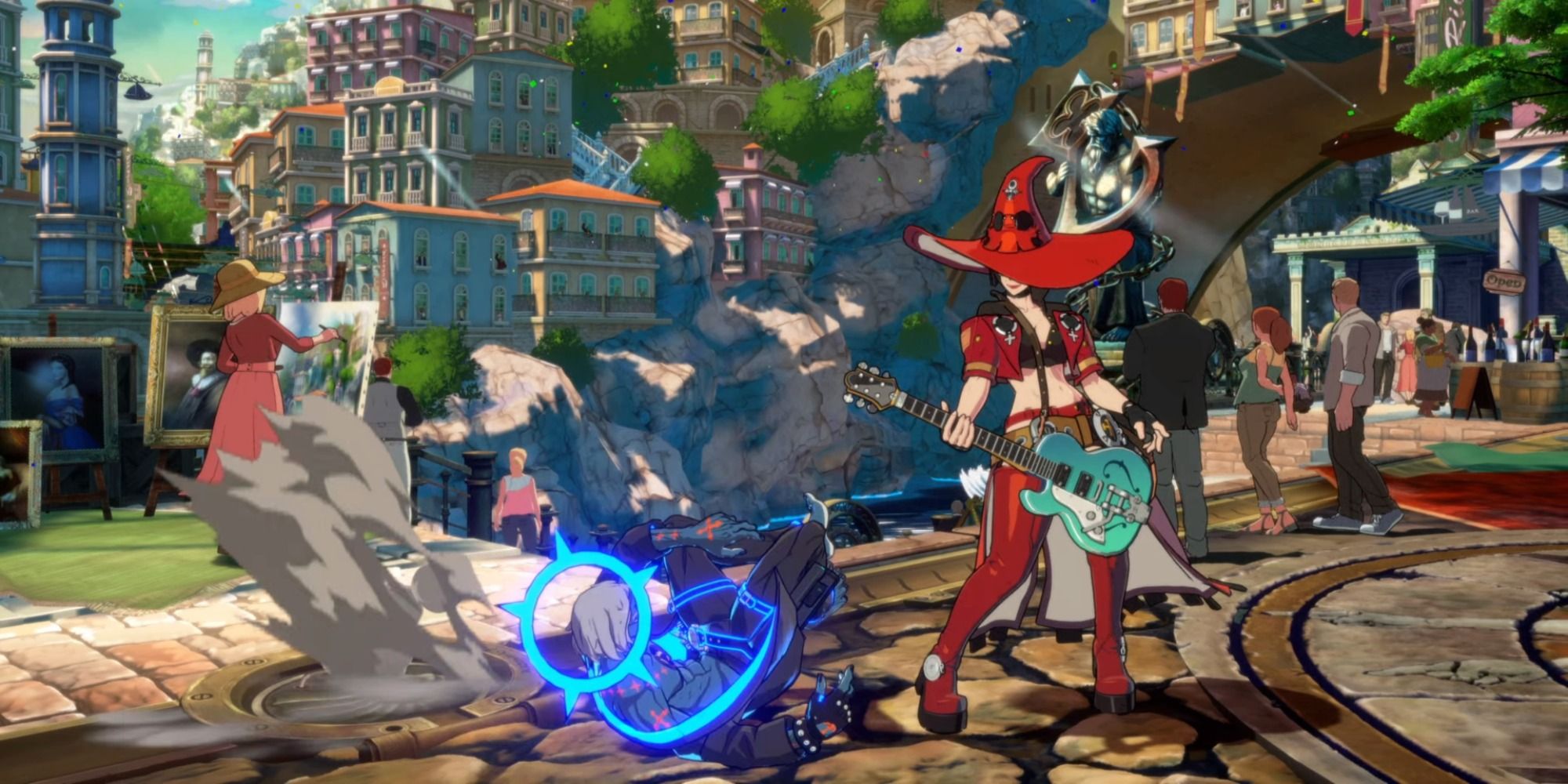 Another of Happy Chaos' unique abilities is his Roll, which allows him to pass through the opponent while keeping a low profile, making it difficult for them to land a hit on him. Rolling will be one of the most essential tools at your disposal whenever the enemy closes in on you or if you want to set up a combo or attack chain.

As mentioned earlier, Rolling allows you to pass through your enemy, which is incredibly useful for mixups and for evading high-profile attacks launched by the opponent. Furthermore, you can use your gun the moment your Roll ends during the recovery process, which can add a whole new layer of annoyance to your gameplay. 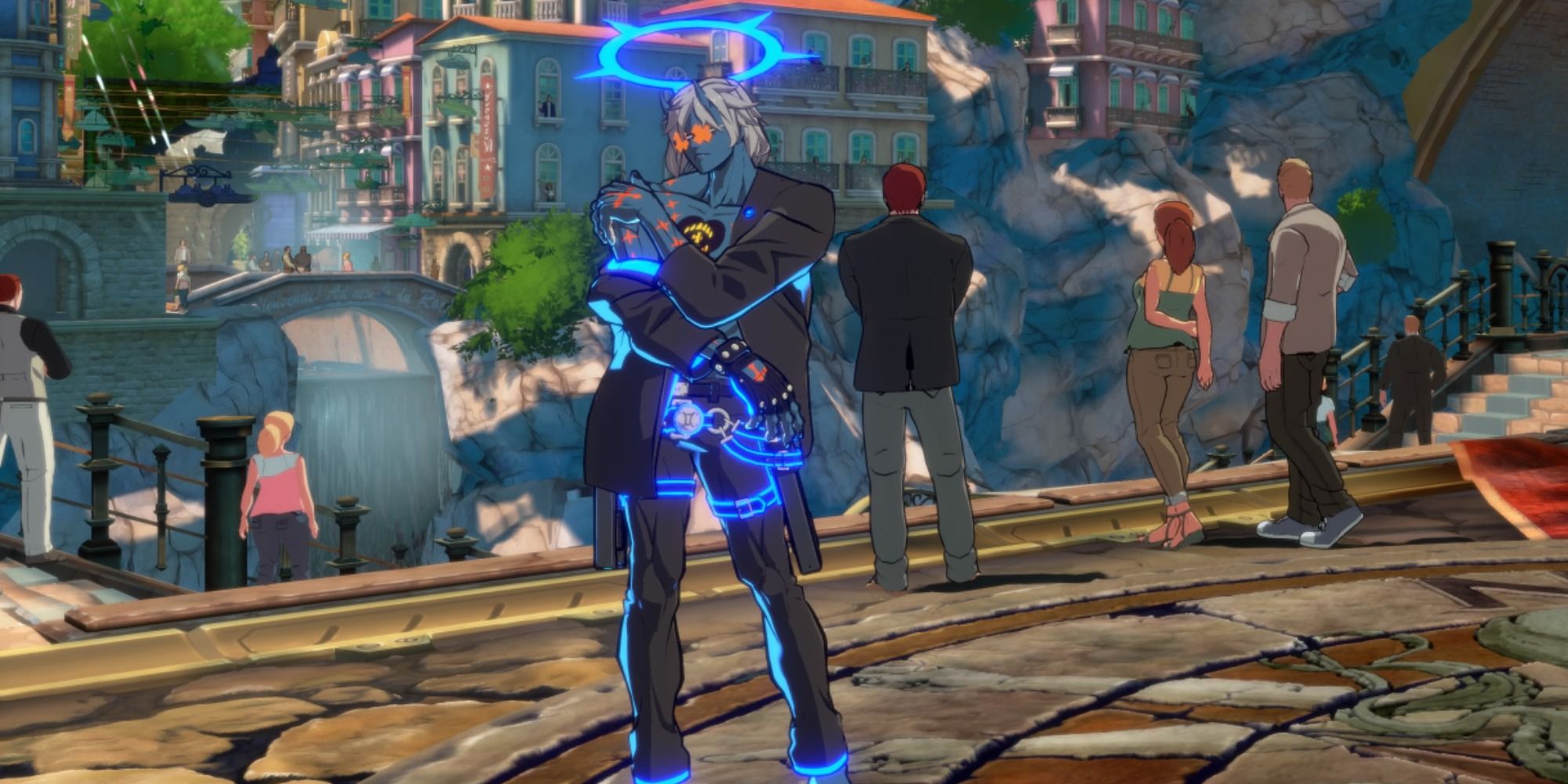 A significant downside to Happy Chaos' kit is his lack of defensive options outside of the universal options provided to every character in the game. If the enemy ever catches you, you best find a way to create space or turn the tide of battle into your favor, or the round point is going to them.

Simply put, if you start feeling the enemy applying tons of pressure on you, you must find a way to alleviate it. Whether that's by sending a clone out to absorb damage, rolling under an attack of theirs, or by using your gun to create some breathing room, something must happen for you to live to see another round. Do not try blocking, back-dashing to safety, or playing super defensively. It will not work with Happy Chaos. 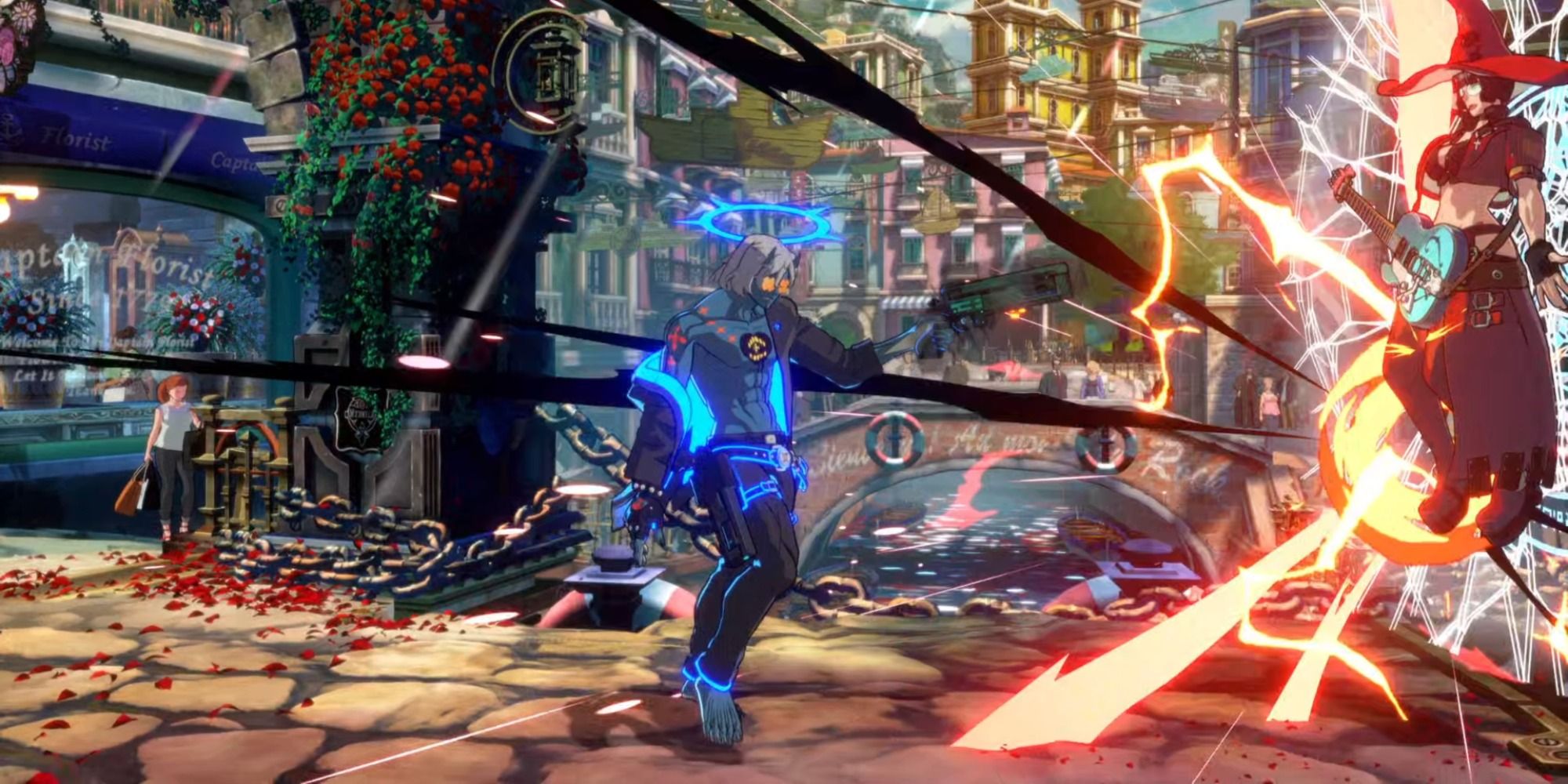 Almost every attack combo of Happy Chaos' gets initiated with either a Close Slash or Standing Kick. From there, you can go directly into a Sweep to set up an air-juggle combo or perform a Forward Kick for a more basic one. Remember that after ending any attack chain, you must take it upon yourself to gather resources back by Reloading and Focusing.

With the information provided above, even the most basic full attack combos with Happy Chaos are a bit tricky to execute. They will take lots of time practicing before performing them effortlessly every single time. However, we provided two easier ones below to give you an idea of how each combo starts, which you can build off of and even find your own!

Remember to end each of these combos by replenishing your resources immediately, or you might get taken advantage of by an observant opponent!