Kingdom Hearts 2 starts slow. I didn’t play Chain of Memories on the Game Boy Advance as a kid, so I went directly into the numbered sequel after finishing the first game and found myself completely lost. I had no idea why Sora was in cryostasis, who Organisation 13 were, or where on Earth Sora and Goofy had wandered off too after the original ending.

It was the beginning of the series’ worst sin – demanding that hardcore fans play every single game and consume all Kindgom Hearts media in existence to have even the slightest idea of what was happening. The narrative is defined by layers upon layers of convolution that have no right being this complex, and the yarn woven throughout Sora’s second (well it’s technically his third) adventure only further compounds this problem. But I still love it.

If, like me, you hadn’t played Chain of Memories first, the opening hours of Kingdom Hearts 2 are downright bizarre. Except for initial cutscenes, Sora is nowhere to be seen, the game doing its best to fill in the blanks before we dive into the thick of things. We awaken as Roxas, another spiky-haired anime boy who has spent his entire life in Twilight Town. It’s a humble little place with a welcoming vibe, one where local businesses thrive and everyone knows everyone after years of walking the same streets. It’s an idyllic lifestyle, but as we’ll soon come to learn, a fabricated one.

Roxas and his friends – Hayner, Pence, and Olette – are your typical teenagers, keen to spend the last few days of summer vacation to their fullest. Normally they would just meet up in their makeshift hideout to gossip about the usual happenings before climbing the clock tower to partake in some sea-salt ice cream. They’re normal kids, watching the world pass them by as they indulge in fun without consequences. It’s tranquil, and the first couple of hours in Kingdom Hearts 2 are spent partaking in odd jobs to raise money for train tickets, with the quartet hoping to take a small trip to the beach before school starts up again.

Aside from the aesthetic, this could be an entirely different series, although it soon becomes clear that this town and everyone who calls it home is a facade. When performing jobs such as exploring hidden tunnels in search of spooky town legends or engaging with a seemingly haunted waterfall our temporary protagonist begins to uncover the fading connections holding this illusion together. Cutscenes also hint towards something more sinister, that Roxas’ own existence is merely temporary, acting as a way to restore Sora’s consciousness until his own experiences are no longer needed.

Kingdom Hearts 2 could have greeted us with a generically wholesome introduction to its world and characters, but instead we’re dealt an existential dream sequence that causes us to question everything around us. Roxas coming to terms with these myriad falsehoods is heartbreaking, the entire world freezing around him when push comes to shove, with him being ushered towards an abandoned manor to fulfil his purpose before being silenced.

Roxas has no choice but to obey, with his status as a Nobody becoming clear and that, without a heart to call his own, all he can do is reside between the cracks until the system he’s a part of collapses. After spending a few hours with this character you deeply feel for them, wishing there was something you could do as he comes to terms with the inevitable tragedy he’s a part of. We’d see him expanded up massively in Birth By Sleep and 358/2 Days in the years to come, but when Kingdom Hearts 2 first launched, this was all we had. 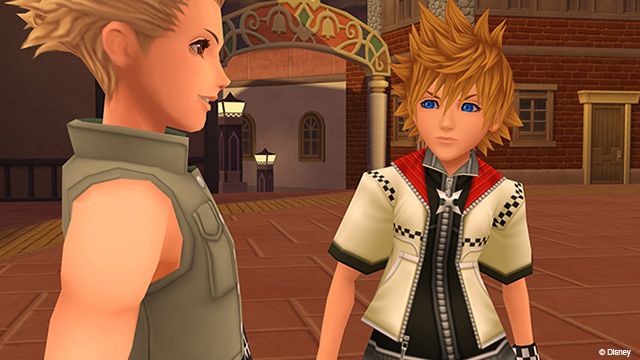 People tend to complain about this opening, especially on repeat playthroughs, because it features so many mandatory activities and piles on the exposition something fierce before giving us access to the main protagonist. But it’s slow for a reason, taking its precious time to build up this artificial town before allowing the bonds we form to all come tumbling down. We aren’t aware of the truth, but just enough clues are provided that we begin questioning where things are going long before the truth becomes clear. Roxas, and by extension the player, have no choice but to go along with the ride and accept the unfair consequences.

Sora awakens and is none the wiser, even meeting up with Hayner, Pence, and Olette as they help him depart Twilight Town and begin his own journey. Before boarding the train and leaving for good he tears up, residual memories of Roxas bubbling to the surface as he tries to mourn the friends he lost, and in a way, never had in the first place. It stands alongside Final Fantasy 7 as one of the finest openings in JRPG history because it willingly subverts our expectations. Kingdom Hearts is melodramatic nonsense at the best of times, but when it sticks the landing there are few stories in the medium that can match its emotional impact.