There’s a lot that Warner Bros.’ MultiVersus does to differentiate itself from Super Smash Bros., with its perk system, character progression, and focus on team-based abilities. Ultimately though, it’s still platform fighter that features characters from a bunch of different franchises. It’s novel in some ways, but there’s nothing original here. What really make MultiVersus stand out is the way it modernizes the genre, both with its free-to-play model and its various progression systems, which appeal to modern sensibilities in a way that Smash Ultimate never will. There’s been some discussion about the future of Smash and how it can continue on after the Ultimate era. MultiVersus is perfectly demonstrates what the next version of Super Smash Bros. should be.

MultiVersus’ approach to free-to-play is typical for most triple-A games. When you start you only have access to a few characters but you can unlock more using currency earned by completing a checklist of missions. As you play matches you’ll earn XP towards your battle pass, which has both a free and paid track. Experience also raises your mastery level with each character, a system similar to – and I’m sorry I don’t have a better example – Marvel’s Avengers. Increasing each characters’ mastery level unlocks cosmetic items and perks, which modify and enhance that character's abilities. Regardless of how you feel about perks in a fighting game, the important thing for our purposes is that there is no pay-to-win. Everything you can buy is purely cosmetic, as free-to-play games should be.

The stuff you can unlock on the battle pass is worthwhile. There’s taunts, emotes, skins, and ringout VFX – animations that appear when you knock an opponent out of the ring. Finishing the battle pass rewards a legendary skin, or variant, that turns Jake from Adventure Time into Cake, complete with new animations and voice lines. As with any battle pass there’s some filler. Banners and player icons make up almost half of the premium track, and the free track is almost entirely badges that track your stats. Overall, it’s got enough milestones to make the premium pass appealing. Nothing here will raise anyone’s eyebrows. The most suspicious thing about it is that there seems to be three types of currencies: gold, toast, and premium tokens. We haven’t gotten a look inside the store yet, but so far everything is here is standard, if not slightly better than your typical battle pass. 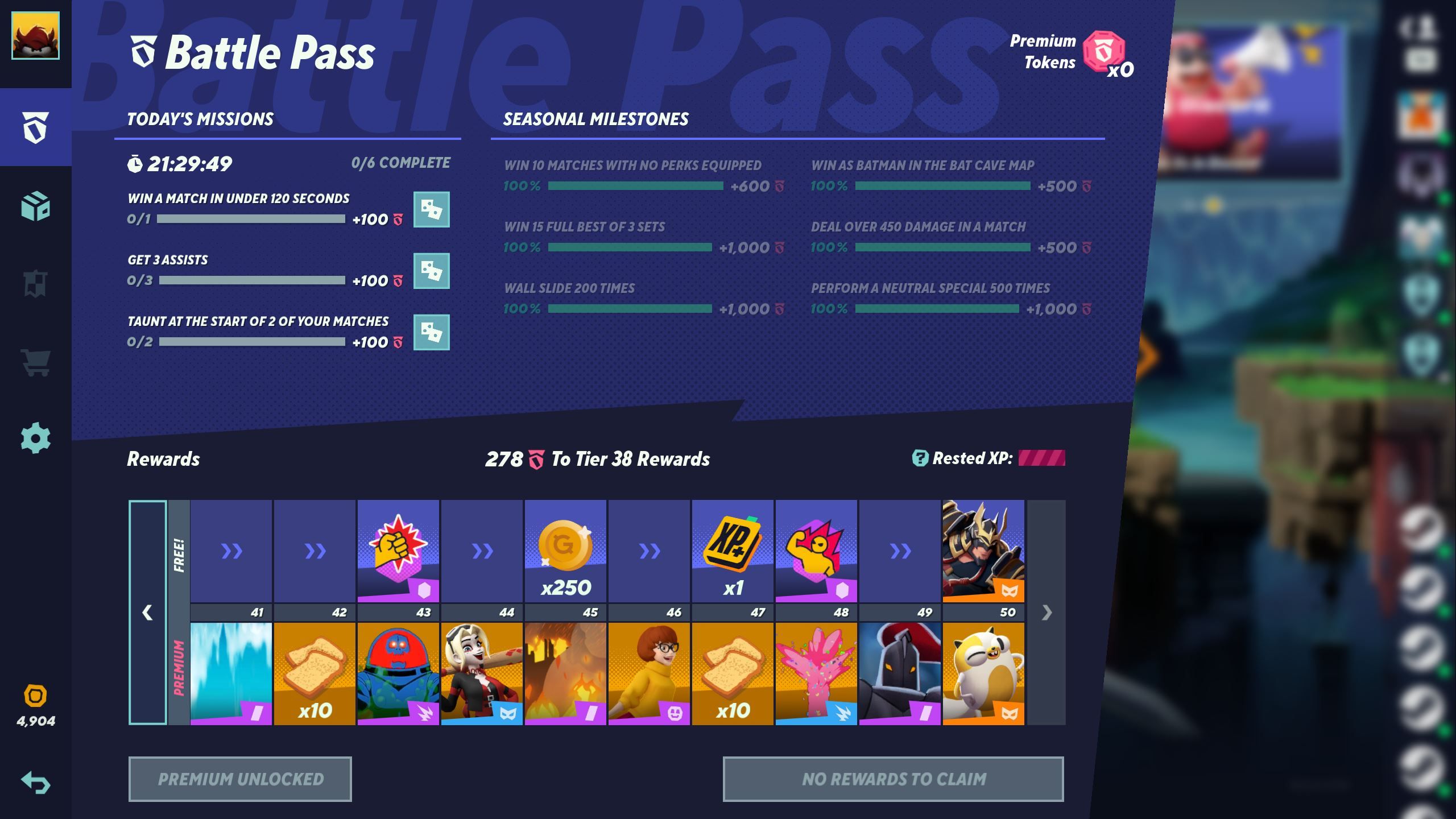 The battle pass itself isn’t what makes this model so intriguing – though I am a fan of Cake and Samurai Batman – it’s the promise of a never-ending stream of new content. I’m way more excited about the next battle pass than the current one, even though I have no idea what’s on it. I want to see what MultiVersus looks like in a year, or five years from now. Each season will bring new goals to pursue and cosmetics to earn. There will always be something new in Multiversus.

In contrast, I already know what Super Smash Bros. Ultimate will look like a year from now, or five years from now – it will look exactly the same. Now that all the DLC fighters are out, Smash Ultimate is functionally a museum, frozen in time, perpetually losing players until the next Smash comes along.

I pick up Smash Ultimate here and there for a few matches with friends, but I would spend a lot more time with it if it gave me something to work towards. I hate to admit it, but free-to-play games have conditioned me to need daily missions, long term goals, and a constant drip feed of incentives. There’s no way to unring that bell, and the sooner Super Smash Bros. adapts to it, the better.

Just as Cake is a variant of Jake, the next Smash could introduce echo fighters as rewards for finishing the battle pass. Instead of adding a character like Sora with five alternate outfits, players could unlock dozens of outfits over time. I know this sounds like heresy to a lot of people, but wouldn’t it be better if Smash was constantly updated, instead of dead and forgotten just four years after launch? No disrespect to the Smash die-hards, but people just don’t return to old games these days unless there’s something new to see, new challenges to complete, and yes, new things to buy.

With 90 characters, 114 stages, and over 1,000 tracks, Super Smash Bros. Ultimate is the ultimate Smash game in a lot of ways. There’s no sense in making yet another $60 retail version of Smash in a few years, but no one is going to be enthusiastic about playing the same game on every future Nintendo console for the rest of our lives. To move forward, Smash needs to do what Multiversus does and embrace the live service model. We know free-to-play games cost players more in the long run, but I’d rather pay hundreds for something that always feels fresh and new than $60 for a game I’ll play for awhile than put on the shelf and never touch again. Not every game is fit for live-service, but Super Smash Bros. is perfect for it.