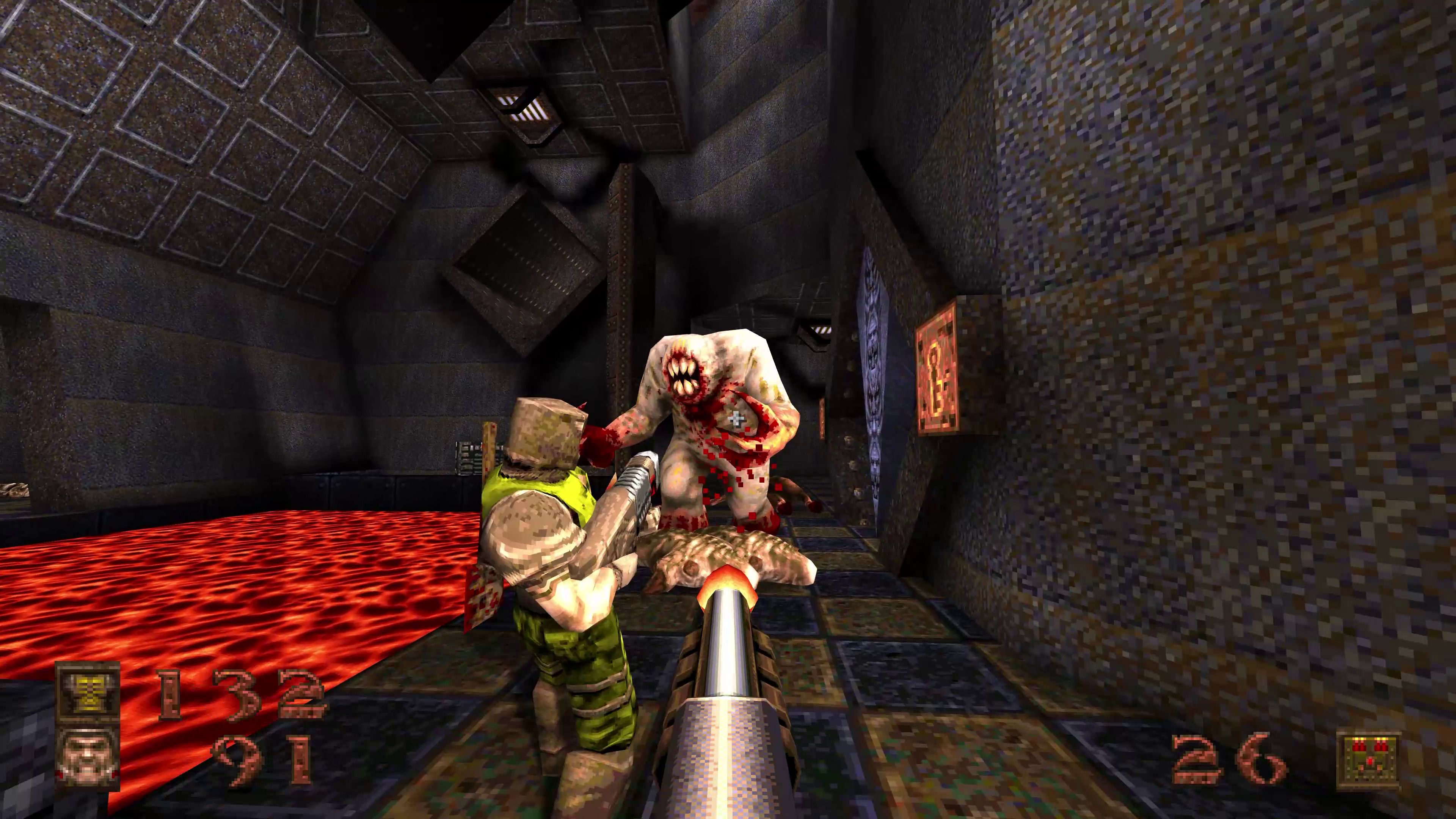 One of the most influential first person shooters of all time is celebrating its quarter century, with a remastered definitive edition.

When Quake first came out in 1996 it redefined first person shooters as we now know them today. It wasn’t the first of its kind – although developer id Software also made that, in the form of 1992’s Wolfenstein 3D – but it was the first ever shooter to be built entirely in 3D. Quake popularised modern concepts like mouse look, strafing, and rocket jumping but due to being primarily a PC game at launch it never had quite the pop culture impact as its predecessor Doom.

At the time, Quake wasn’t necessarily the game everyone expected it to be. For musicians it’s usually the second album which is the most difficult, but for developers it’s usually the third game that causes problems and Quake suffered from classic third game syndrome. Id’s resident genius John Carmack only finalised Quake’s technology relatively late in the development process and a lack of leadership led to recriminations among the team and the departure of John Romero.

25 years on and Bethesda, quietly and without fanfare, has released a remastered version to mark Quake’s quarter century. This is very much the definitive edition of the game as it comes with the two original mission packs, Scourge Of Armagon and Dissolution Of Eternity, along with two made more recently by Wolfenstein: The New Order developer MachineGames. Dimension Of The Past was originally made for Quake’s 20th anniversary, while Dimension Of The Machine is brand new for the 25th.

Add in Quake’s original multiplayer, updated with the seamlessness we expect from modern online gaming, and you have a very meaty package indeed. Especially considering that the remaster is available as a free download if you have Microsoft’s Ultimate Game Pass or can show that you own the original game on PC. The volume of content is not an issue, but the question is how does it stack up against modern shooters?

The first thing to realise is that this is very much a remaster and not a Final Fantasy 7 style remake. What Quake has received is very much a light-touch remastering, which brings 4K visuals and solid 60fps frame rates, but doesn’t presume to mess with the game’s distinctive look and feel. The blocky textures, nowadays oddly reminiscent of Minecraft, are still very much present – and quite rightly so. Quake looked great 25 years ago and looks even greater now, but not in the high resolution, realistically textured manner you would expect from a modern first person shooter.

In terms of gameplay, there’s a lot that stands out. On the anachronistic side, there’s a distinct lack of modern precision in the aiming and no attempt to replicate real world physics beyond the basics. Effectively, there are collision detection boxes around Quake’s enemies, so you can damage them merely by firing in their general vicinity. You soon discover that that works both ways, as enemies will still damage you when you think you’ve managed to strafe out of their way.

Quake is noticeably unforgiving in comparison with modern shooters. It isn’t checkpointed, although it is chopped up into quite short sequences; the original game is split into four chapters with seven to 10 segments each. But you can effectively make your own checkpoints by saving at any point, so that isn’t a significant issue.

The campaign also doesn’t bother with any discernible storyline, which is probably wise given narrative was never id Software’s strong point. Quake is especially vague as to what’s going on though, especially as the original game has a supernatural, Lovecraftian theme, whereas most of the sequels switch to a more generic sci-fi setting.

There’s a certain patchiness, too, with different id employees taking charge of level design for each chapter. However, it’s still possible to marvel at the gothic vibe, and the gameplay conventions – finding coloured keycards and runes to open up areas, shooting and triggering switches to uncover secrets, weapons, and ammo – create a sort of primitive narrative thrust.

Despite its age Quake also contains elements which, even now, feel impressive and cutting edge. Chief among those is its weaponry, which remains gloriously over-the-top. There’s the stock shotgun, which has the shot distance of a sniper rifle, and there’s an untold amount of satisfaction to be derived from catching an enemy perfectly with a rocket or even an explode-on-impact grenade fired from the launcher, as you watch opponents explode into a pile of quivering flesh.

Stand still at any point in Quake and you won’t last long. The deeper you get into each chapter, the more tactical you have to be, in order to maximise whatever ammo and health packs are available. Especially as, sometimes, the most innocuous-looking enemies prove the most damaging, such as the water-dwelling zombies which will resurrect unless you frag them with something explosive.

The original mission packs are surprisingly good, as are the two created by MachineGames, who are rumoured to be planning some kind of Quake reboot. The latter are especially hard and experiment with new weapons, such as a laser machinegun which ricochets hilariously. Dimension Of The Machine, in particular, also manages to achieve a more modern look without losing Quake’s visual distinctiveness.

The online Deathmatches are pretty basic by modern standards but they’re still enjoyably intense and played out in beautifully designed arenas. If you know how to rocket jump, you stand a chance of doing well but, otherwise, prepare to die a lot.

Despite the remastering efforts, Quake is definitely something of a historical artefact. However, it was originally so far ahead of its time that it remains highly entertaining even today. And if you are interested in the history of shooters it’s a fascinating insight into how they’ve evolved to their present glossy state.

Given that it can be acquired for next to nothing, and includes some brand new content, this remaster has plenty to offer both new and old fans. Even in remastered form, Quake isn’t perfect but it’s easy to see why it originally made such an impact on the games industry and it can only be hoped that this is the prelude to a more sustained return.

Dr. Disrespect Could Bring A Lawsuit To Twitch After His Ban

Report: 4K-Capable Nintendo Switch In The Works For 2021

Immerse yourself in this 34-inch ultrawide Samsung monitor for $280