The Operators of Rainbow Six Siege are well-equipped to handle most threats, so they're the perfect people to call when Archæans

– which are also known as Archies and are essentially zombies infected by an alien parasite – begin popping up around the world. Rainbow Six Extraction places these Operators smack dab in the middle of a bizarre sci-fi scenario, but you don't start with the full crew of terrorist/zombie fighting experts nor do you have access to their full arsenal of equipment.

While your initial crew and loadout options may seem small at first, they will expand as you progress through the game. With this guide, we'll show you what you need to do to unlock every operator and get your hands on every piece of REACT Tech.

How To Unlock Operators 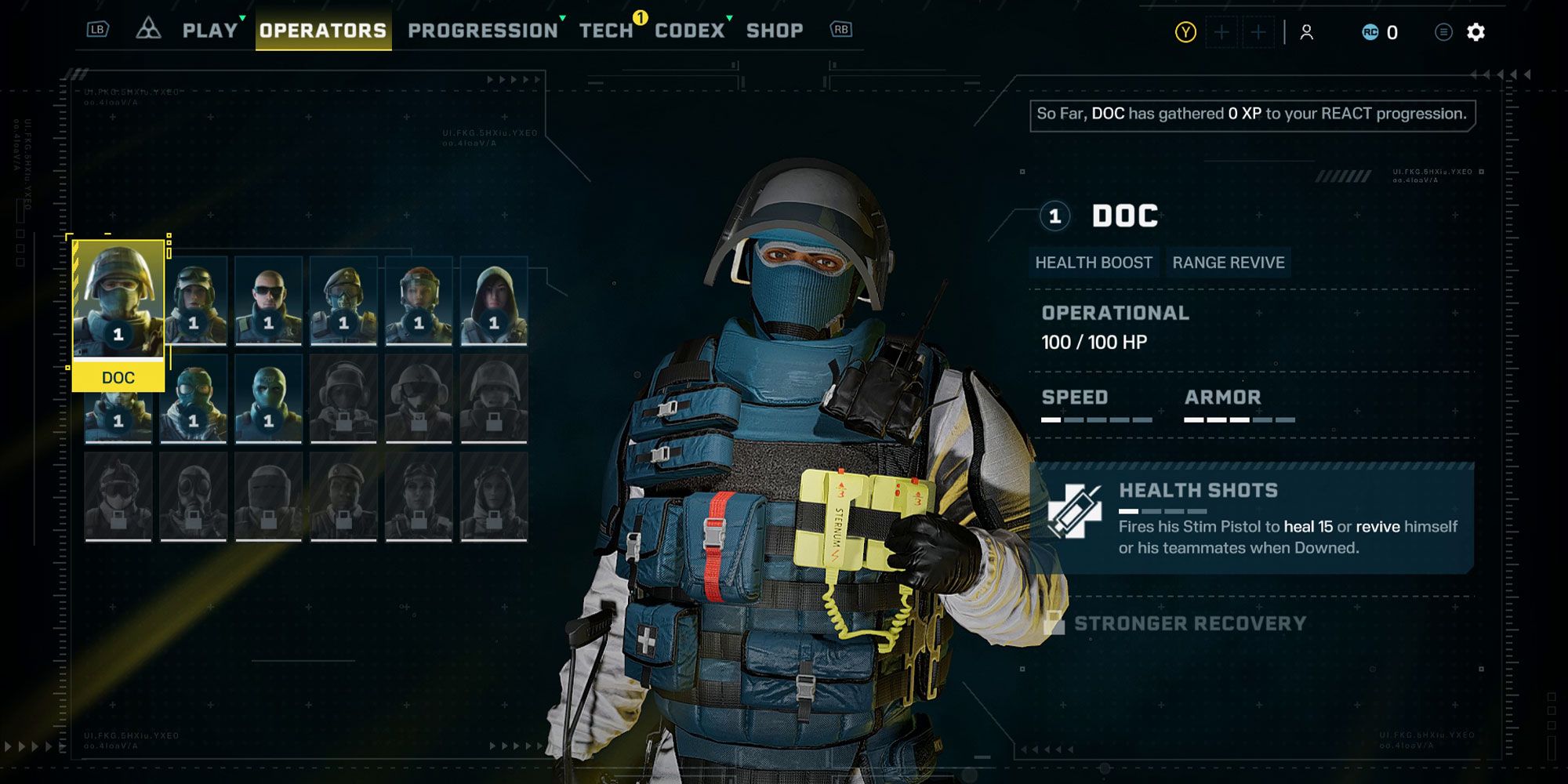 When you begin Rainbow Six Extraction, you'll be able to choose from a selection of 9 Operators with everyone after stealth-specialist, Vigil, locked off. Unlocking the remaining Operators is fairly simple. All you need to do is advance along Extraction's progress bar by earning XP. The best way to do this is by completing all three objectives during a mission. If you accomplish every task and extract with everyone in the squad present, you'll get a good dose of XP at the end. You'll also get more XP for killing Archies, completing objectives, and extracting with most of your HP intact.

For even more XP, you can finish Extraction's challenges, which are called Studies. Each level will have its own unique Studies that consist of three side objectives like killing a number of Spikers, pinging Nests, reinforcing walls, etc. Finishing these challenges rewards you with a good amount of experience points, so they're definitely worth doing.

When you reach this Milestone, you'll gain access to The Backbone, a group of Operators who specialize in defending objectives. This group includes Jager, who has access to a turret that can be set up to blast incoming Archies; Rook, who has a sack full of armor to give to his teammates; and IQ, who can detect REACT supplies in the surrounding area.

Getting to this point unlocks The Strong Arm, who are Operators that are good at blasting Archies. This group lets you play as Tachanka, who can put down a mounted LMG; Smoke, who has smoke grenades that unleash gas that hurts enemies; and Fuze, who can attach explosives to the wall that drop cluster grenades.

Finally, the last group of Operators known as The Architects will unlock here. This group includes Nomad, who shoots proximity mines that can knock back Archies and clear hazards; Capitao, who has a tactical crossbow that shoots smoke and venom bolts; and Gridlock, who deploys ground traps that damage and slow enemies.

More Operators may join the game later, but right now you'll have access to the full roster after Milestone 17.

How To Unlock REACT Tech 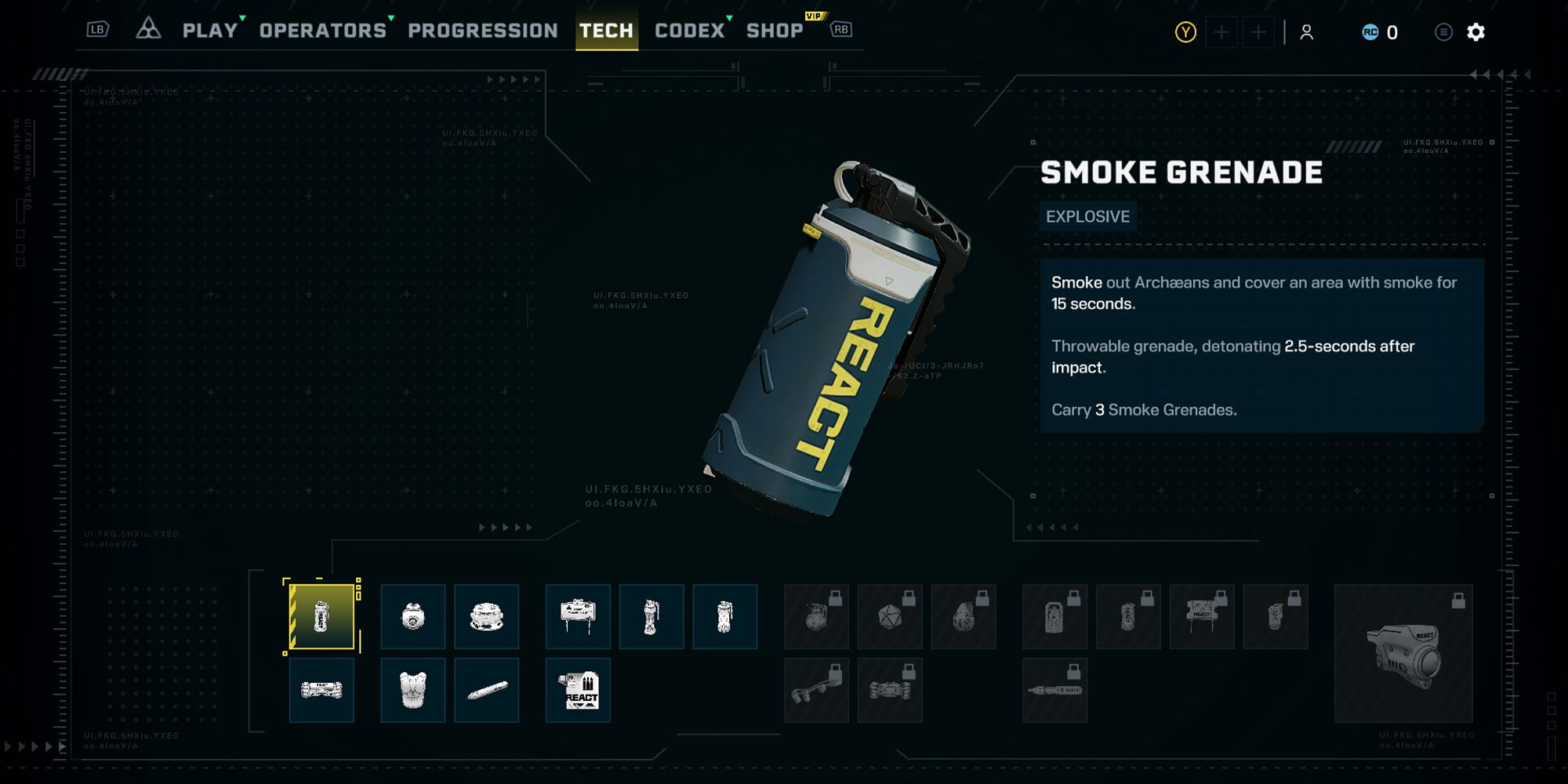 The progress bar also allows you to unlock new gear to use out on the field. Certain Milestones will unlock REACT Tokens, which can be spent on new pieces of REACT Tech. Some of these may be forms of explosives, while others will be additional gadgets that can help you stay alive. Much like the Operators, a lot of equipment will be locked away until you hit specific Milestones.

You'll start out with just the Smoke Grenade and Recon Drone available to equip. New tech will unlock at the following Milestones:

When you hit the very first Milestone, you'll unlock Tech Tier 1. This will allow you to use REACT Tokens to unlock the Impact Grenade, Scan Mine, Revive Kit, and Body Armor.

When you reach Tech Tier 5 at Milestone 25, there's only one piece of REACT Tech left to unlock, although it is one of the best gadgets that you'll get. You'll be able to use the REACT Laser, which will burn away the Sprawl. The Sprawl is the sticky black substance that appears on the ground and walls that slows your movement. Normally, the best way to get rid of this gunk is to shoot it or hit it with your melee attack. But the REACT Laser saves you the trouble of doing that, which really helps when you're playing missions at the higher difficulty levels. What's even better is that this gadget is automatically equipped on your weapons and can be toggled on to replace your existing REACT UV Light. It's a nice little reward for grinding out all of those experience points.