Ardolis is the Pirate Base planet of Ratchet & Clank: Rift Apart. You’re here to rescue Pierre and meet Captain Quantum, but to do that, you’ll have to battle your way through a load of pirates. Here, we’ll take you through the level, including how to beat the story, how to complete the Treasure Hunt sidequest, and how to find every Gold Bolt, Spybot, and Pocket Dimension.

When you first arrive, you’ll be greeted by several pirates – just three at first, then more will arrive on ships. Take them out, and remember that the shielded pirates need area weapons that can attack them from behind like the Topiary Sprinkler, Glove of Doom, or Shatterbomb. Once these have been dealt with, look through the binoculars and see Pierre Le Fer. 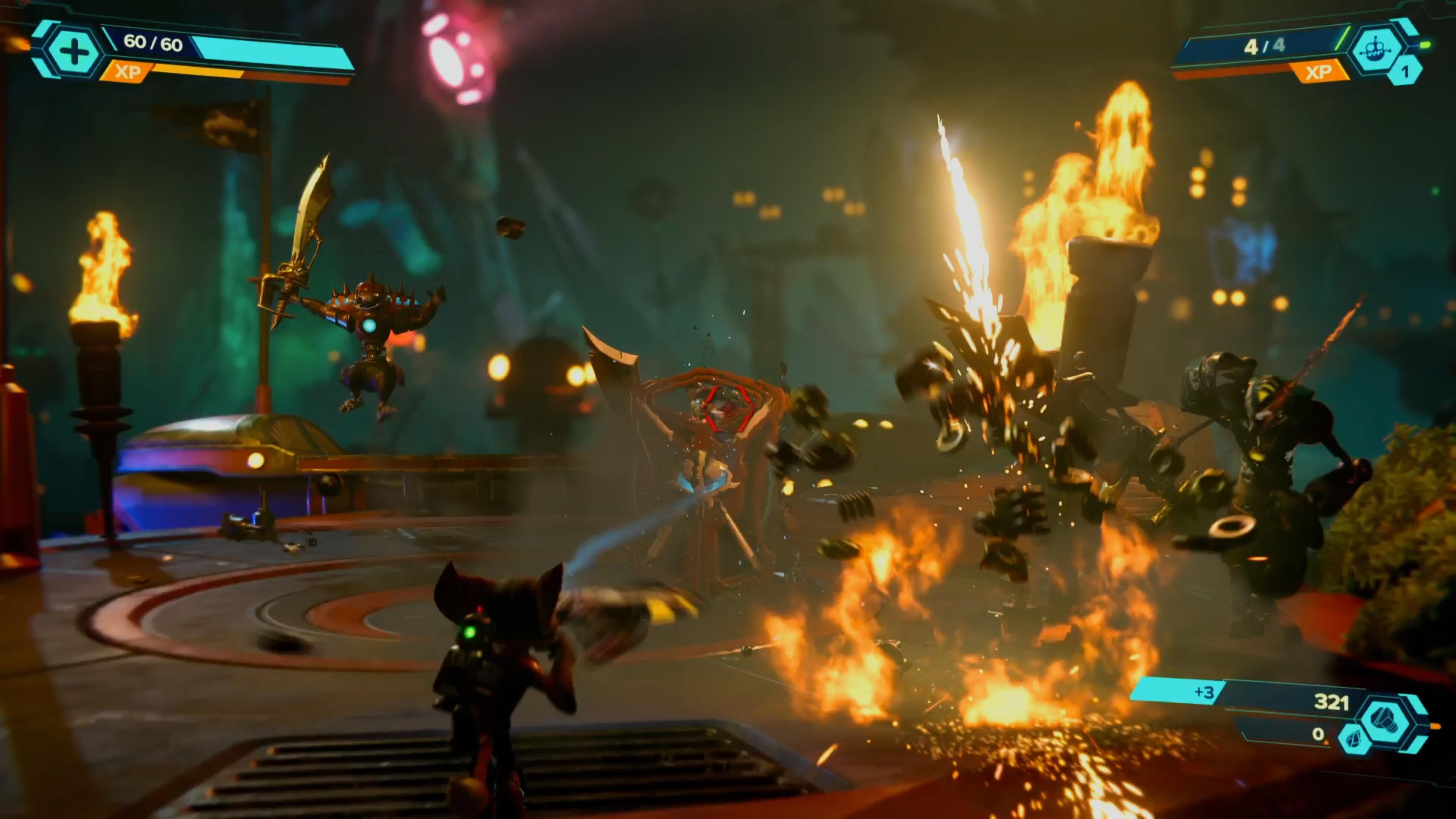 Keep going along the stretch of land you’re on, as it’s a linear route. There are more pirates to fight off on the way, but they’re all fairly minor. Use the exploding barrels and boxes too. Once you get down to the river, climb up to the other side and jump over the broken bridge. Head over the next bridge too, fighting off the pirates, then rift across the gap and make your way to the cannon. Hit it to take out the pirates, then jump across yourself.

This takes you through  to the pirate barracks, where you’ll fight a bunch of dinosaurs. Just kidding, you’ll fight pirates. Lots of them. Area weapons and heavy weapons should be used here. After clearing the barracks, head outside, and you can boost over the ramp to reach Pierre Le Fer. Before that though, drop down to the beach for the Pocket Dimension. 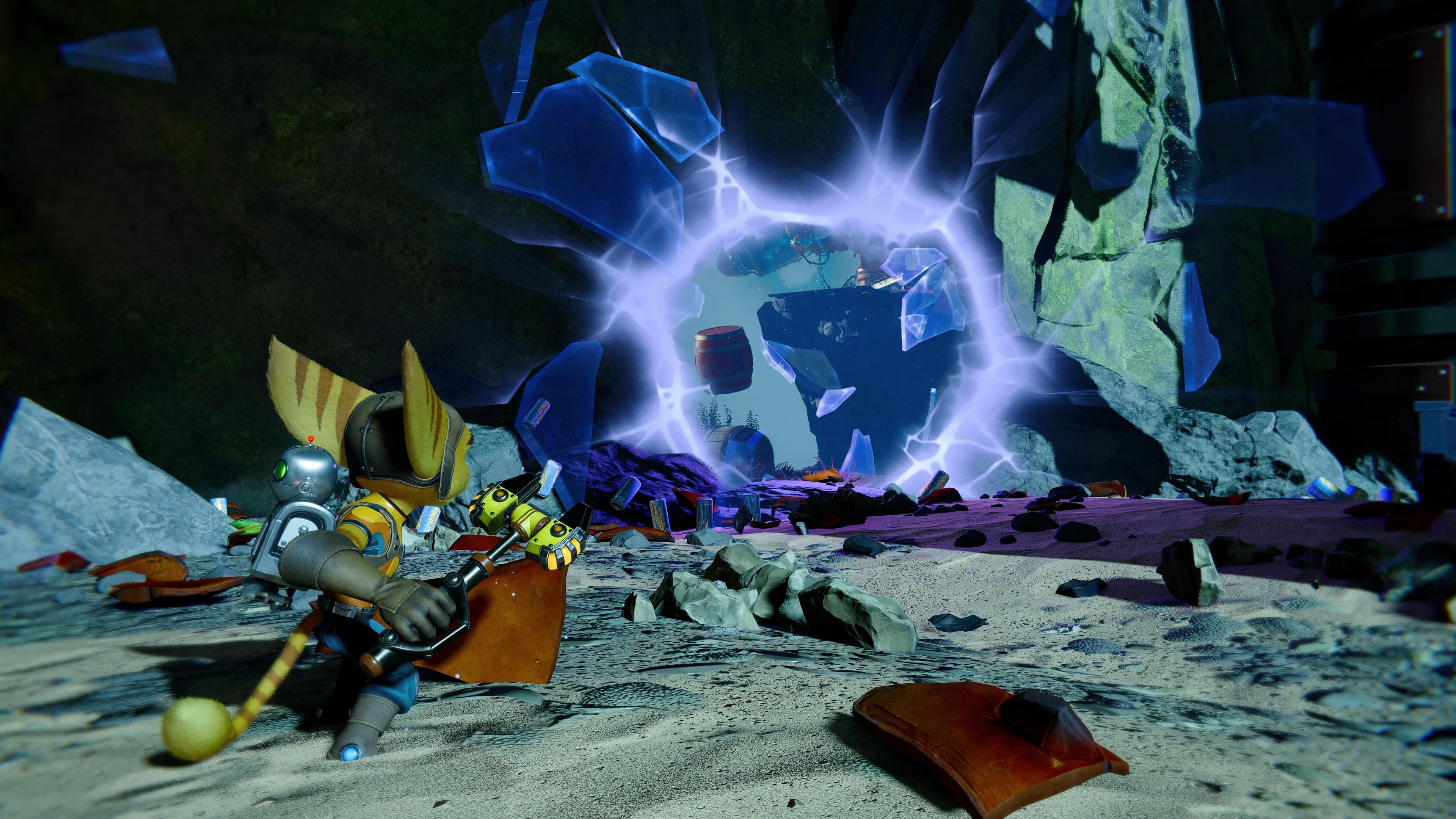 This is the only Pocket Dimension on Ardolis, and gives you one of two pieces of armour on Ardolis. In the dimension, you need to ride a series of different slingshots to reach the end. Exit and take the elevator back up, then boost over the ramp.

Get Pierre Le Fer Down

Once you’ve cleared the gap, you’ll reach Pierre Le Fer, but the work isn’t over yet. Once more, you’ll have to fight off a bunch of pirates. They will continue to arrive on ships around the outside, so be wary of that and prioritise area weapons. None take much to wear down, but there are a lot of them, so keep on your toes. Once they have all been dealt with, use your wrench near the bell. This closes the hole in the middle of the arena so that you can get Pierre down in a cutscene. 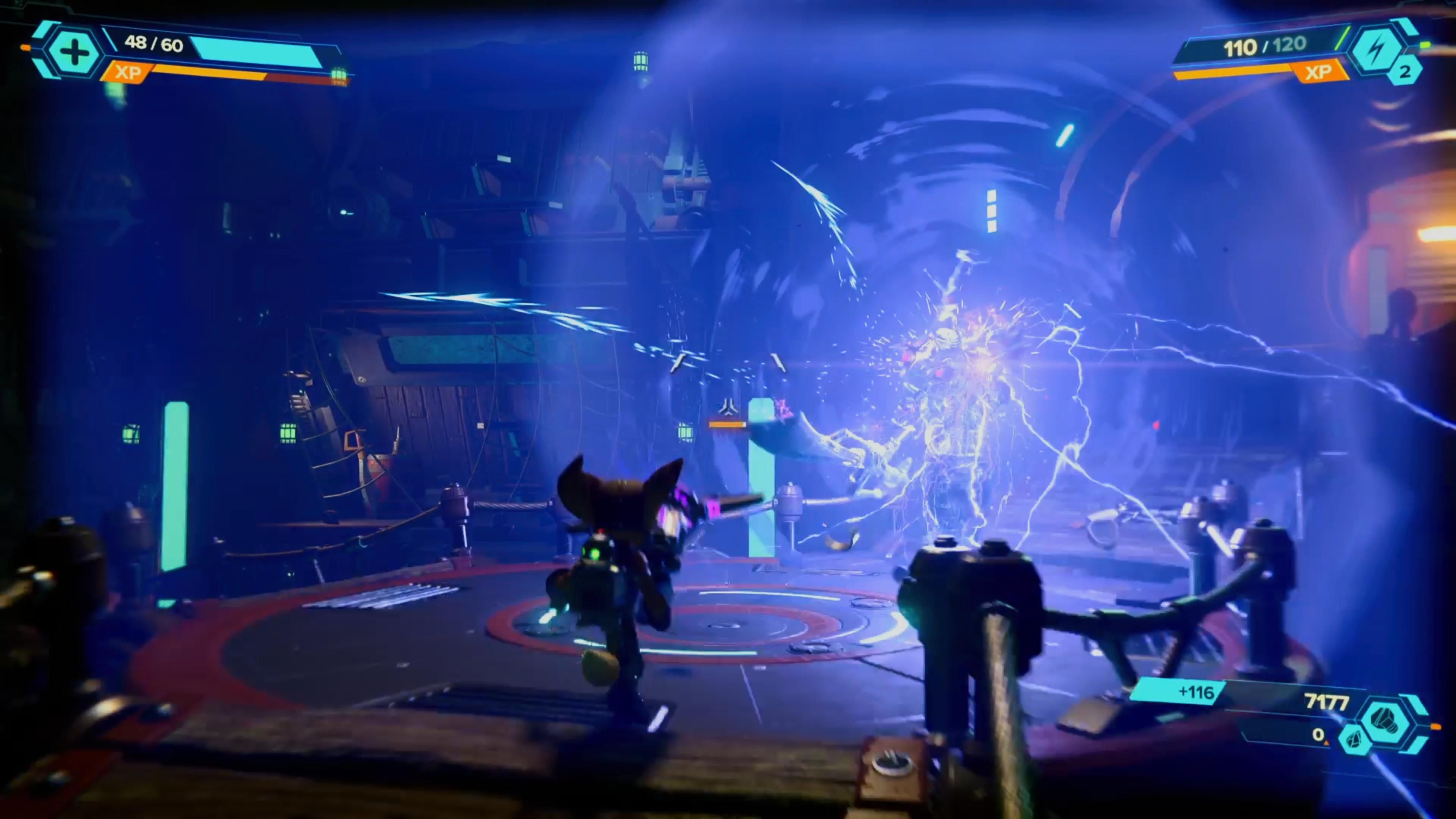 After this, the paths off the main area will open up, and you will have two options:  Go to Skull Mountain or Treasure Hunt. Since Treasure Hunt is a side quest that eventually leads you back here, we’ll do that first, then head for Skull Mountain, but if you want to race on with the story, skip ahead to the Skull Mountain part. 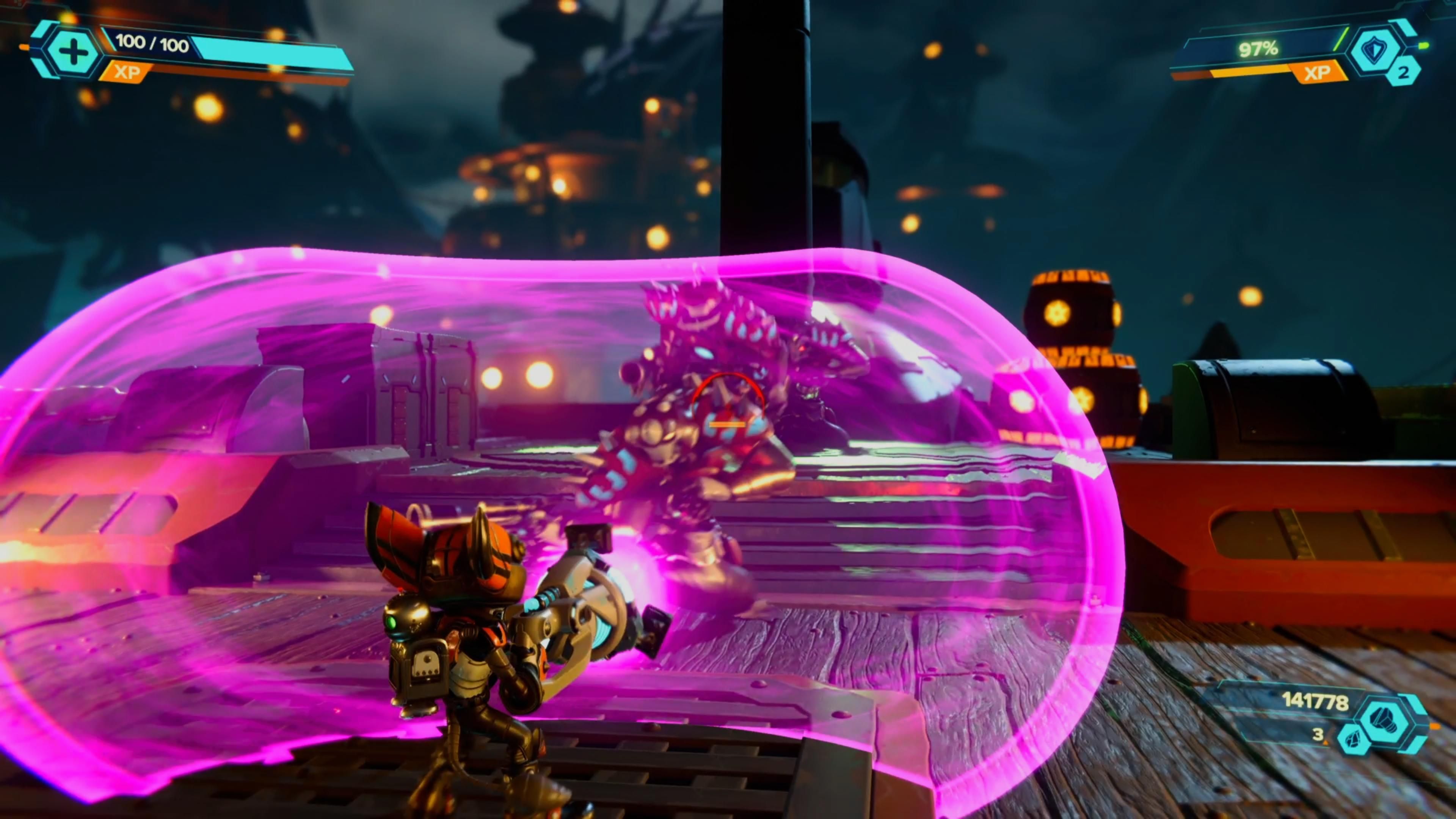 There are no boss battles here, but there are lots of waves, so make sure to switch out low ammo weapons and keep yourself in the fight. Once they have been defeated, stand on the circle platform at the back of the room and ride it up. There’s one last crop of pirates to fight up here, then you can open the chest at the back. This will reveal the location of all the collectibles in the game. Teleport back to where you just rescued Pierre Le Fer.

Head for the lower island and fight off the few enemies that are here. It sort of seems like the game wants you to jump on the boat here, but you can actually grab and swing a small orb above it. Swing up, and you’ll be able ride a Speetle across the water. There are ramps that act as a way of guiding you. After a couple of ramps, you’ll hit more land and can jump off and continue on foot. 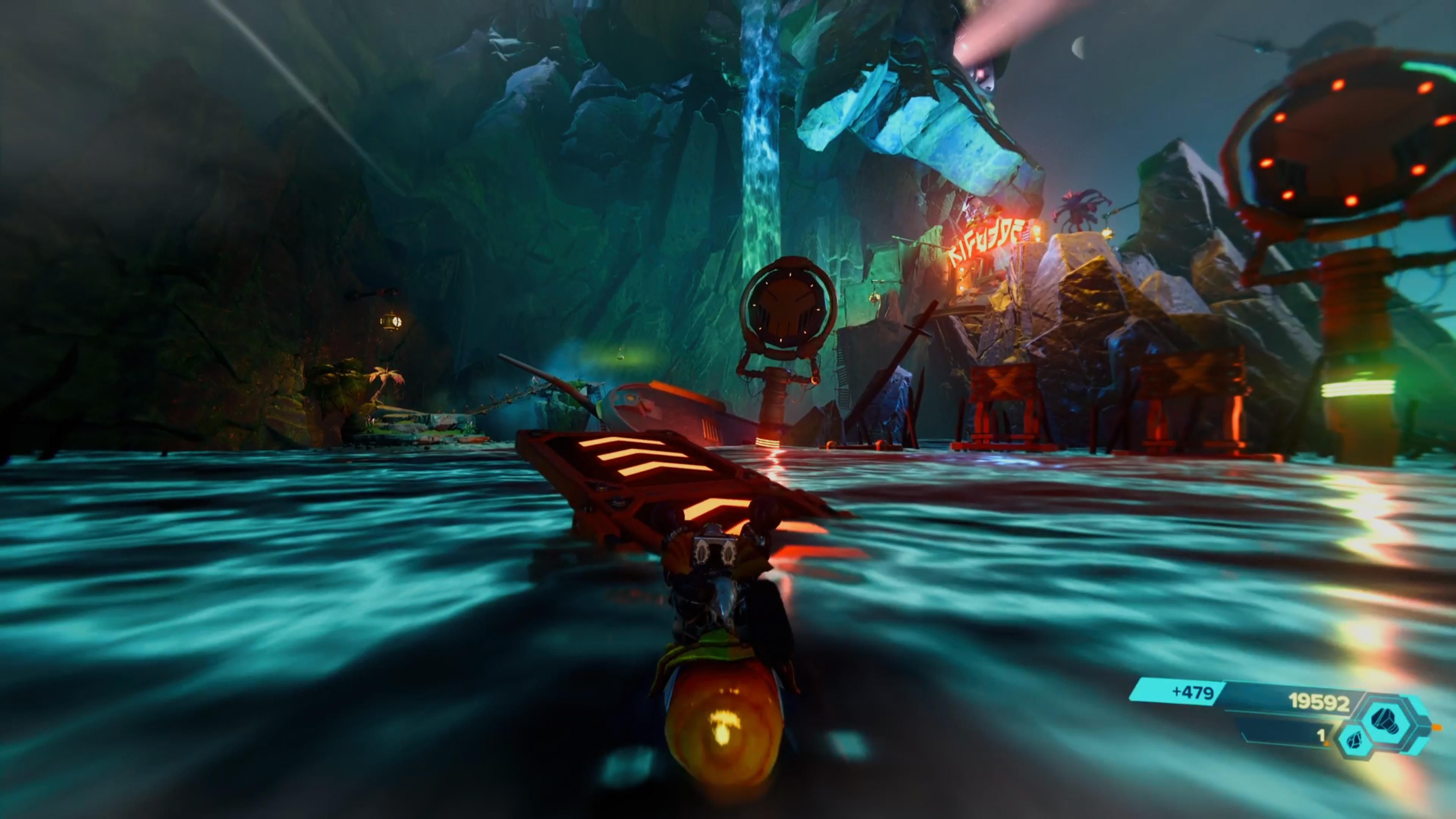 Go up and fight the few enemies before slingshotting over to Skull Mountain, which turns out to be an amusement park.

At the park, there are some pirate trials you’ll need to survive before meeting with Captain Quantum. The first trial is karaoke, and this time I’m not joking. You’ll need to shoot the pirate droids in order to make them sing, kind of like Simon Says. The order of the three is below, with 1 on the left, and 5 on the right. 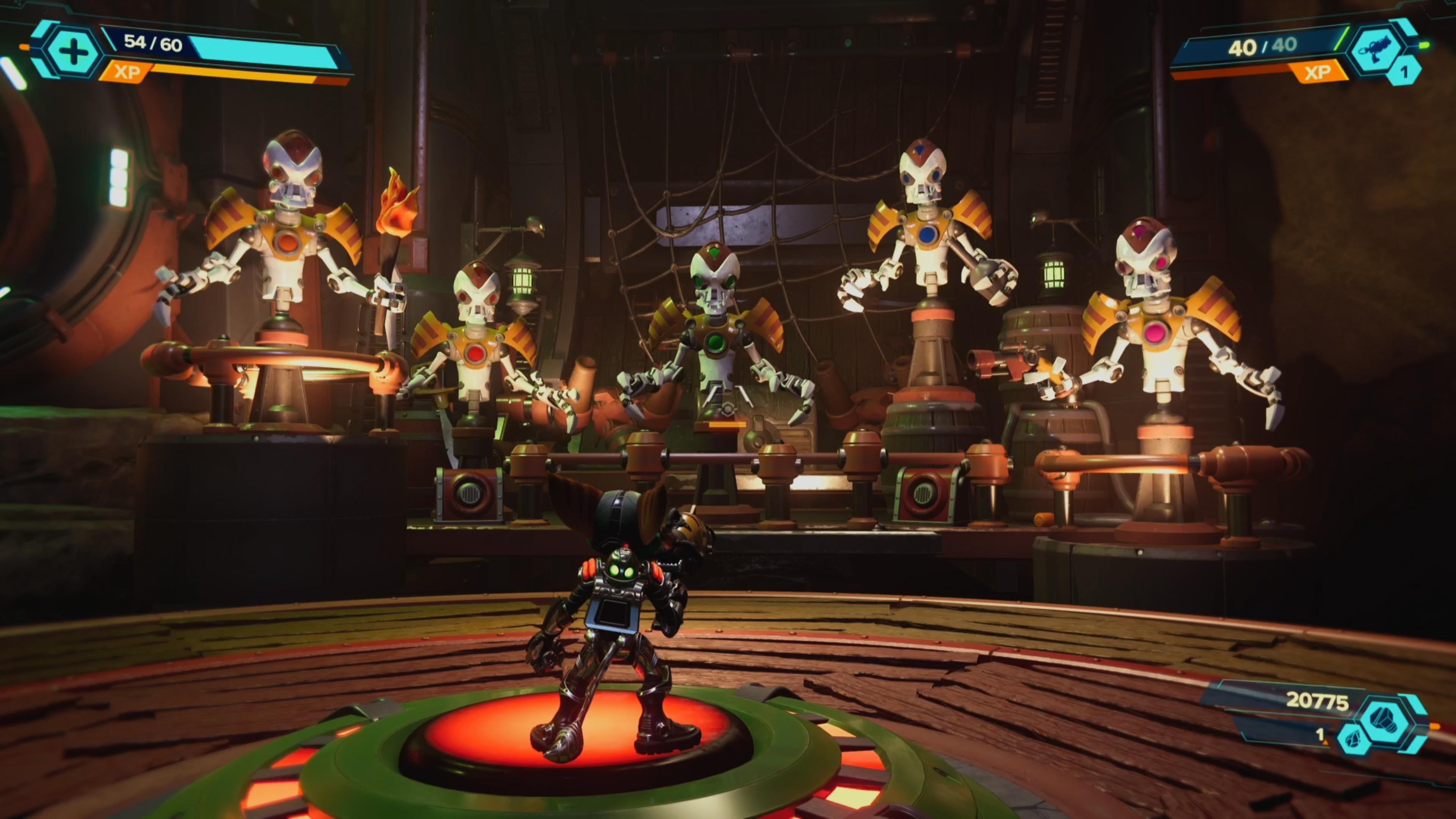 With this, the first trial is complete. The second trial is fighting a Grunthor, but it’s already dead. Not as in, it’s an Undead Grunthor either – it’s just dead. However, to progress further, you’ll need to solve a Glitch puzzle. 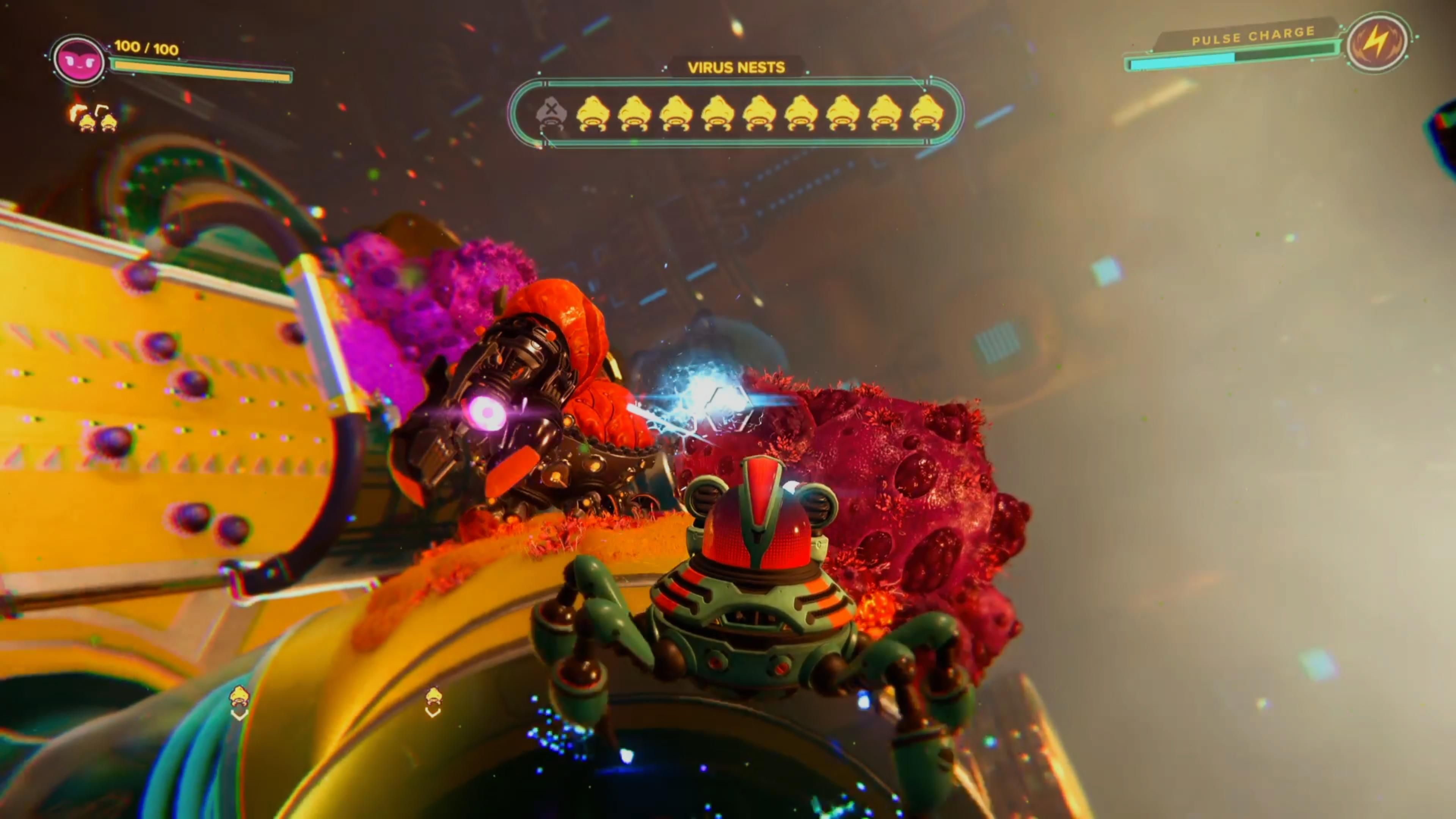 As soon as you get control of Glitch, lead her up the outside of the tube and shoot at the first virus nest. No shield, so it dies easily. Work your way down then through the small tunnel, shooting the pink barriers. Continue down and pick up the upgrade before heading around the right hand corner to step on the switch on the small podium and take out the virus nest there, before pushing forward and hitting the virus nest on the ceiling. Go past it and step on the switch to the right, before turning around and taking it out. 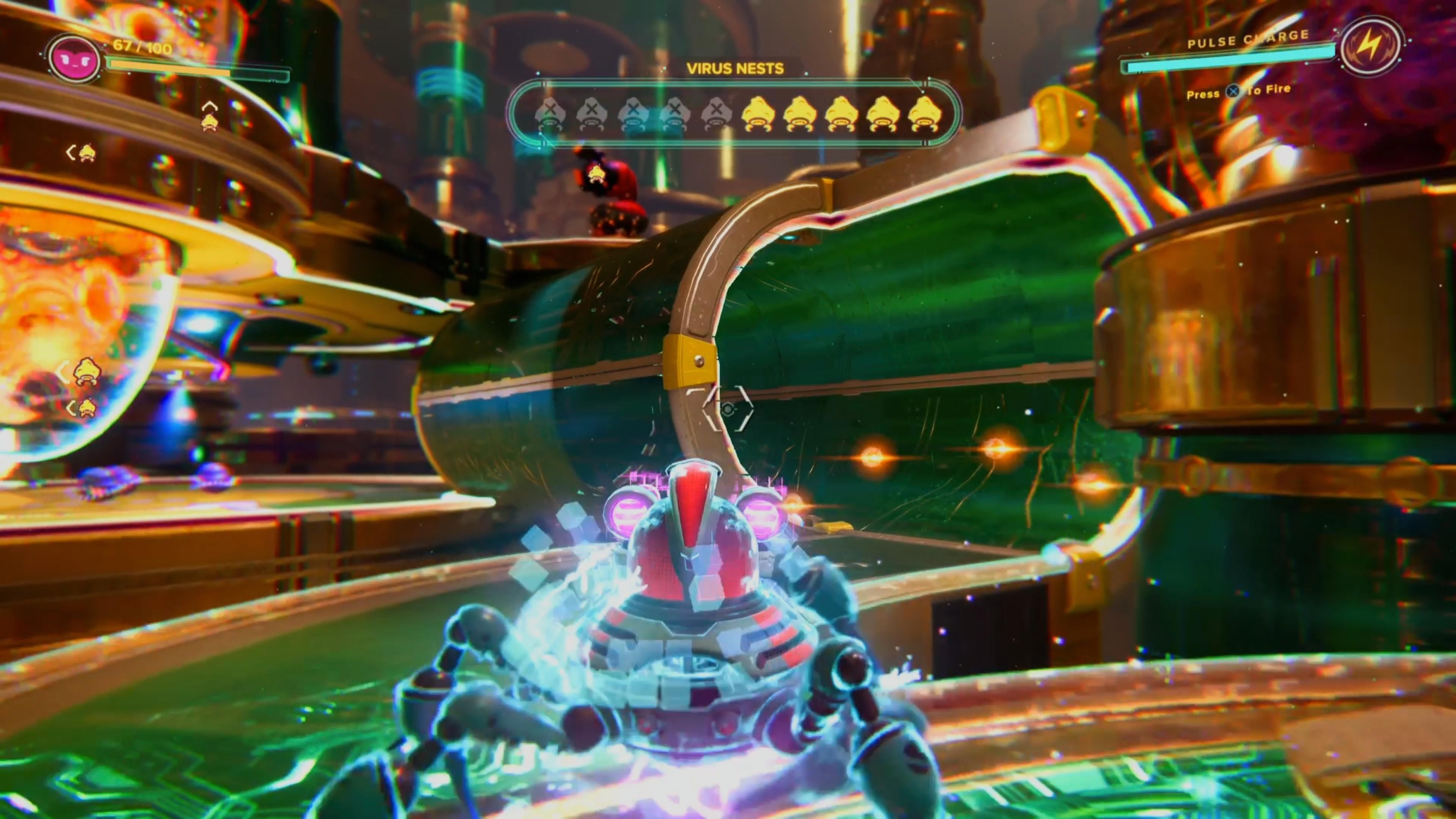 Next, heading right, step on the switch at the green platform and taking out two more; one that drops its shield and one that never had any to begin with. After this, go through the green tunnel to the next area. 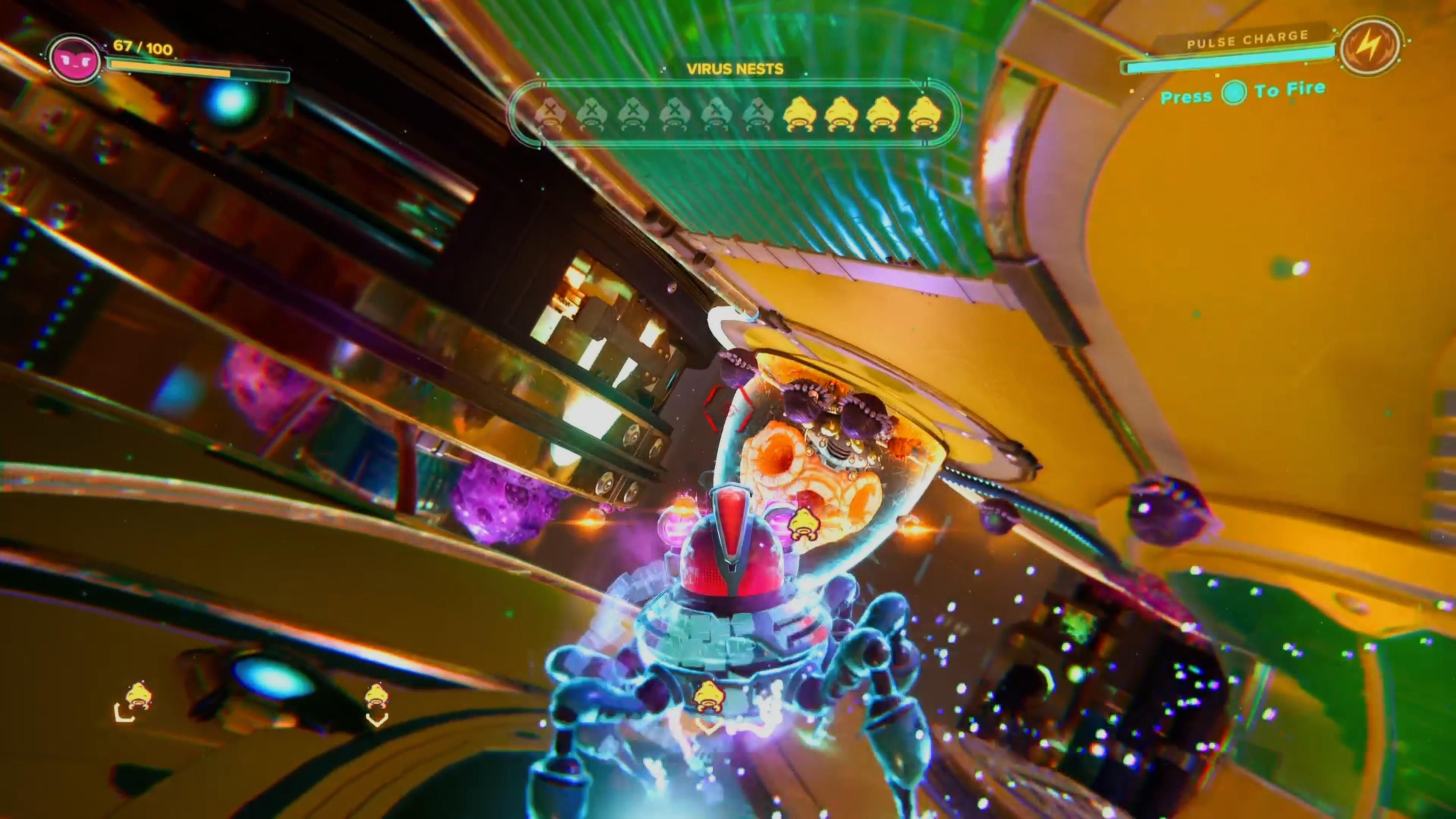 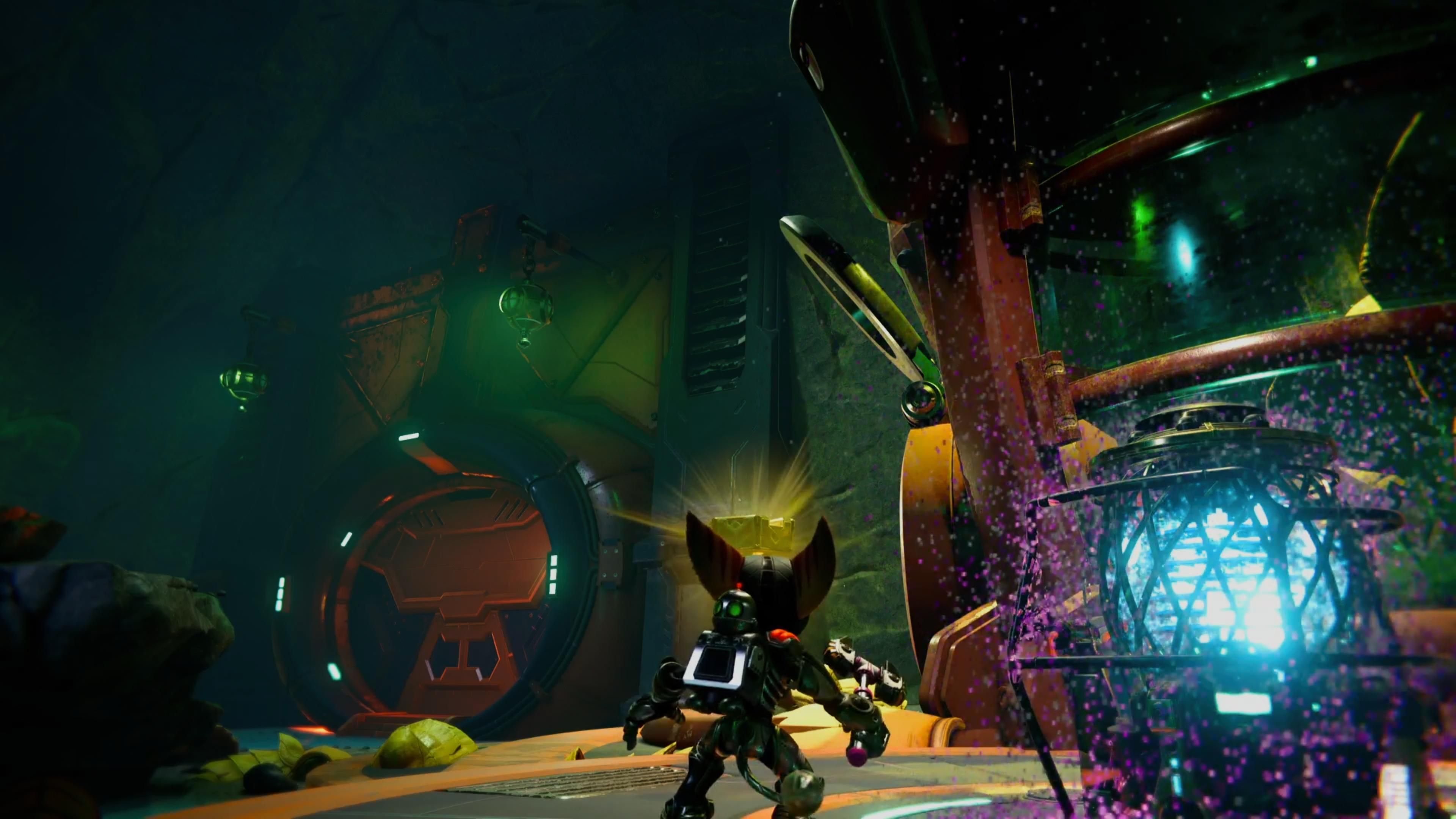 Completing this puzzle will reward you with one of Ardolis’ Gold Bolts. 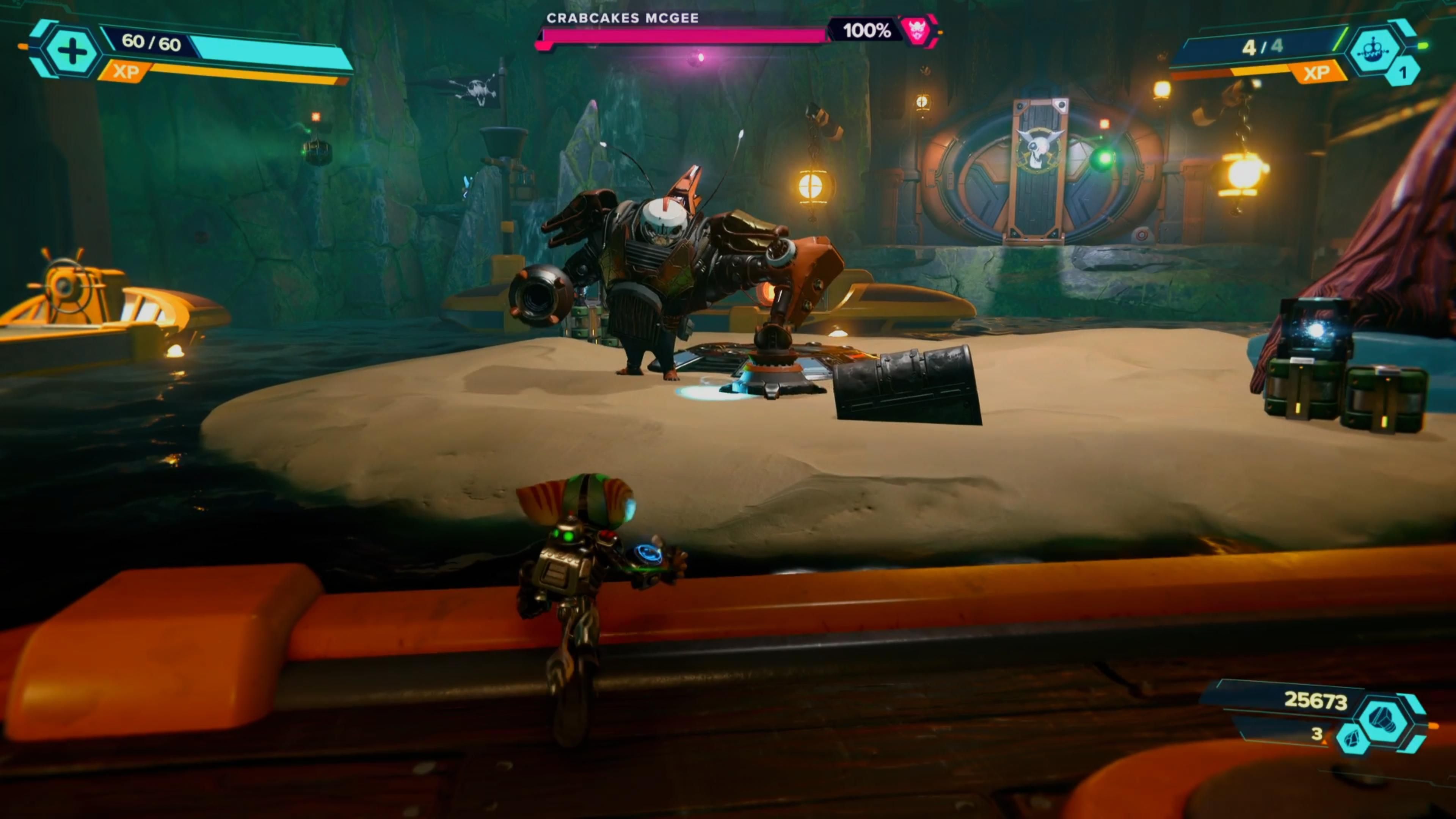 After the puzzle, go through the door and you’ll find yourself on a ship going around in a circle. Three other ships will end up emerging, and you’ll need to leap from ship to ship, fighting all the pirates that emerge. Once you’ve done this, and island will rise in the middle, and you’ll fight Crabcakes McGee – keep him in place with a Topiary Sprinkler and use heavy weapons. He fires lots of projectiles and bounces around a lot, but he’s a glass cannon compared to some other big enemies. 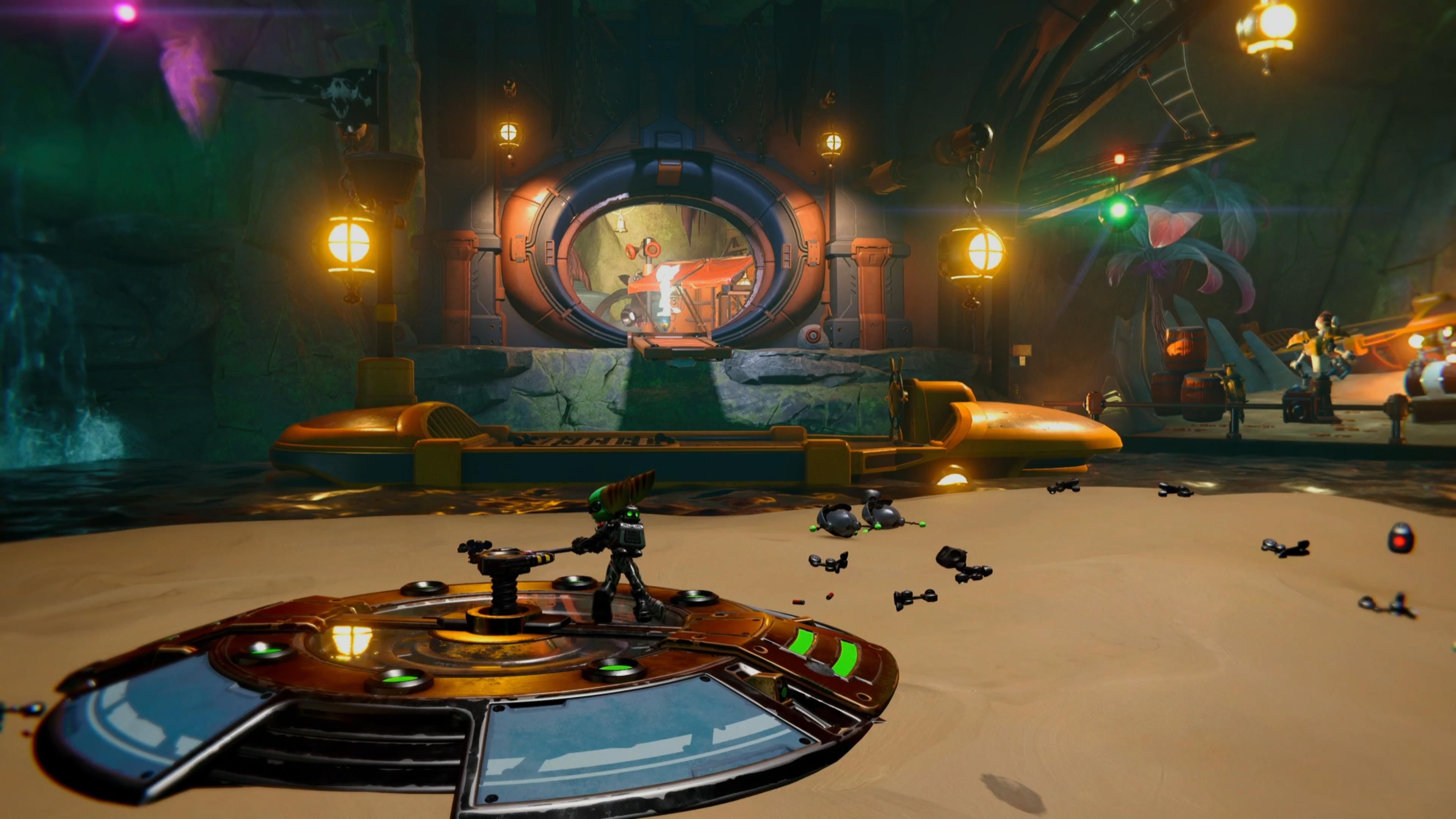 You can now open the bolt crank to lower a drawbridge, revealing the second armour piece.

After this, you’ll meet Quantum, who turns out to be this dimension’s Quark. Thanks to a misunderstanding, you’ll have to fight his own men to defend him. For the first stage of the battle, it’s just regular enemies, so stick to using the exploding barrels and firing area weapons. Once this wave has gone, hit the ‘launch ship’ button to start the next phase. 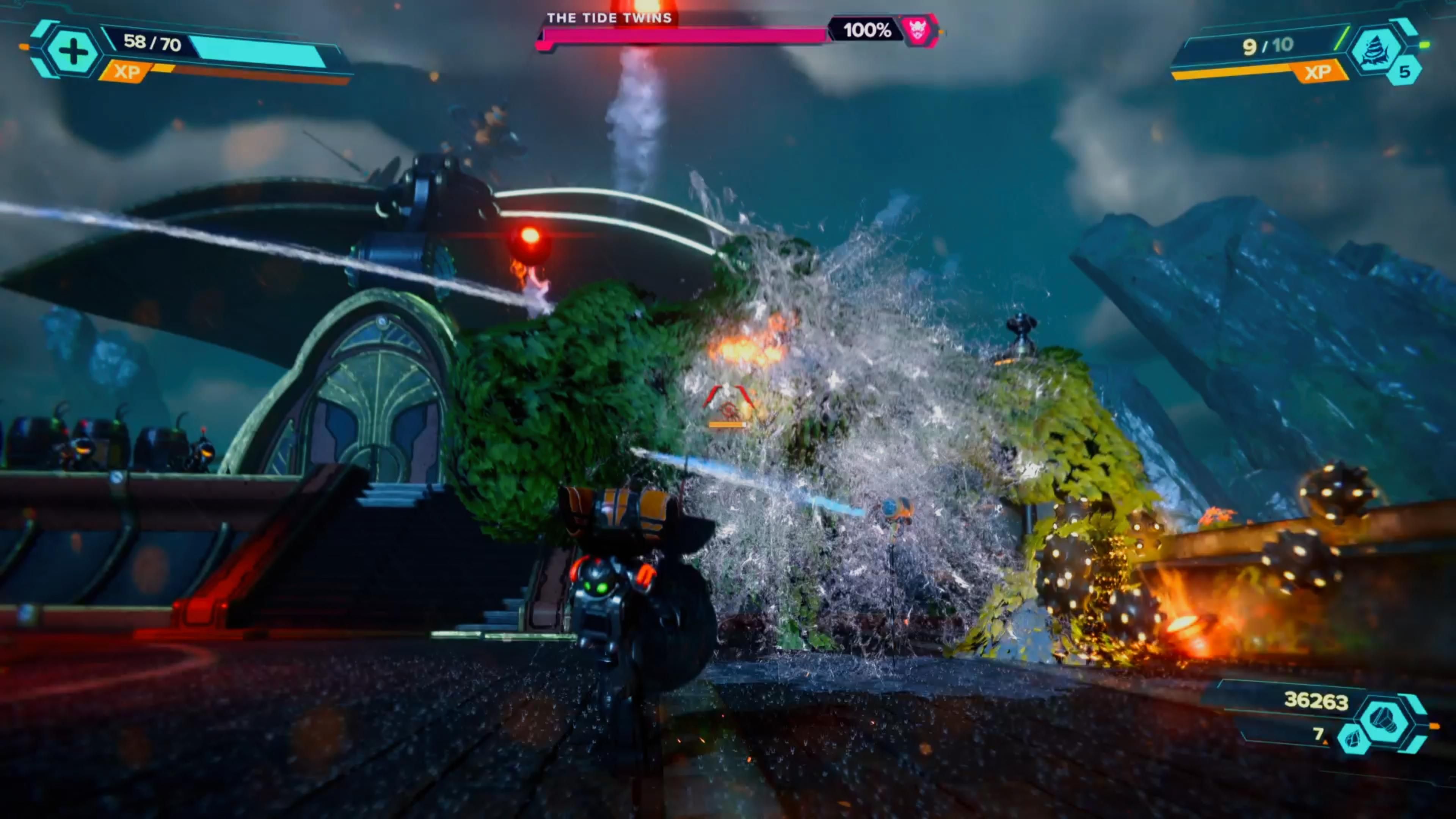 In this phase, you’ll fight the Tide Twins, who will use bombs and try to jump on you. The Topiary Sprinker or Glove of Doom can be effective in pinning them in, but otherwise use heavy weapons. Once they have been defeated, use the bolt crank at the front of the ship. This will raise the bell, so hit it and summon Bubbles for a cutscene to begin. 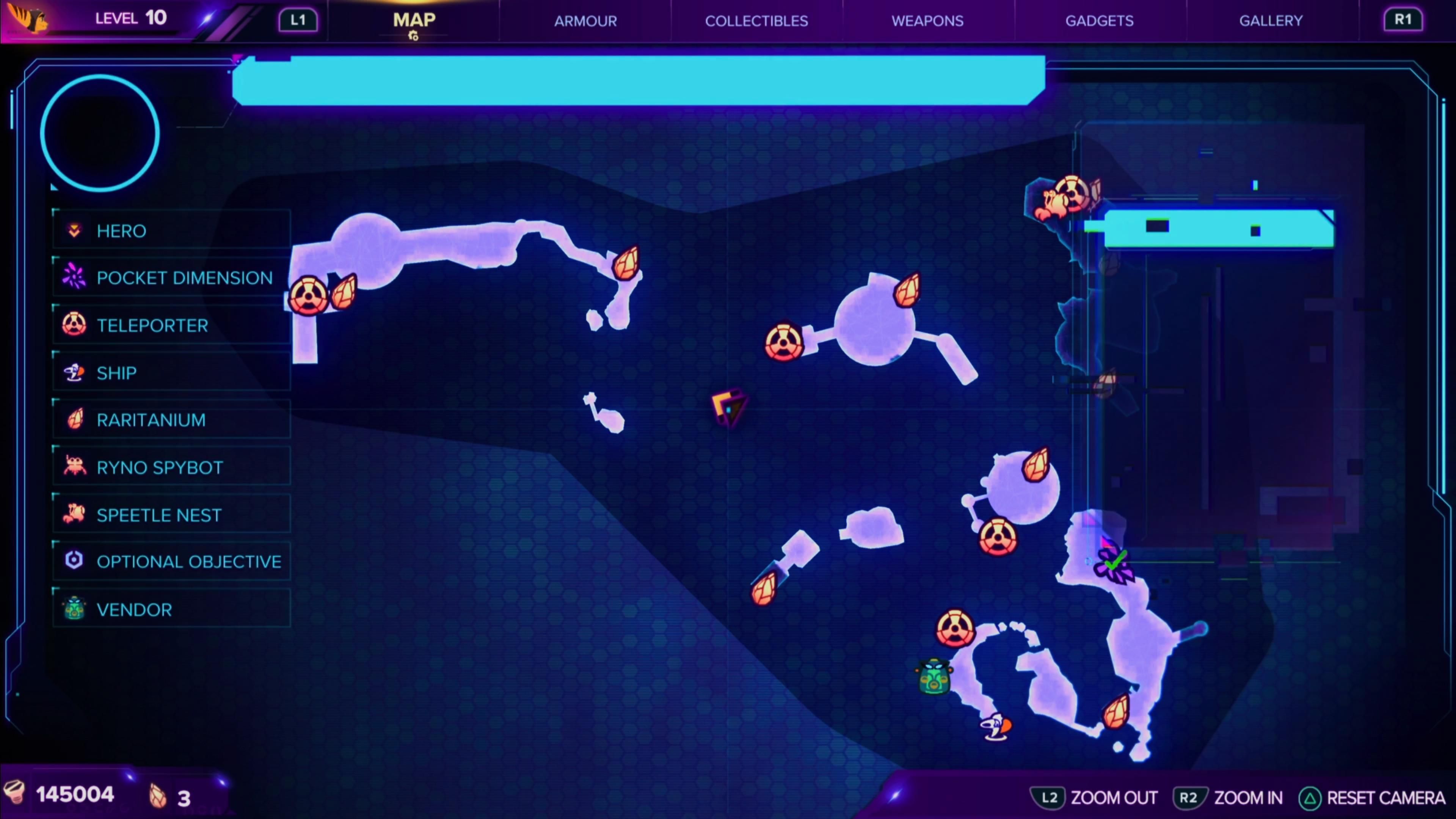 All that we have left to do is find the last Gold Bolt and the Spybot. The Gold Bolt is at this point on the map, in the water, between two stacks of exploding barrels. You need to ride a Speetle around to it. 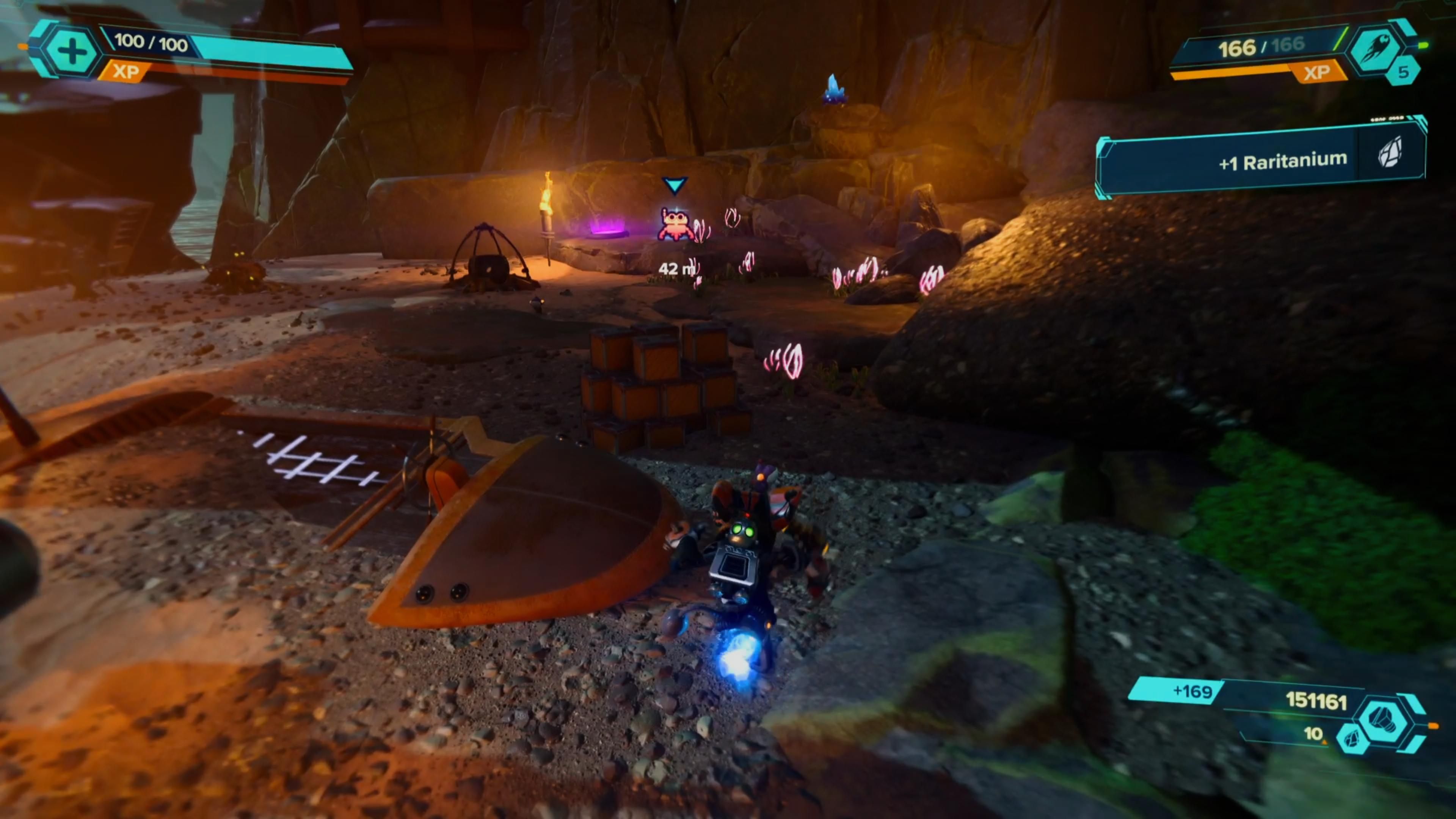 The Spybot can be found at the very north tip of the northeast island – you will not visit here in the story, so you will need to hunt it out specifically.

2K returns to making NFL video games, but not a Madden competitor