The game-like interactive reality show Rival Peak has turned into a hit on Facebook, with more than 22 million views of the first six episodes of the weekly show.

Genvid Technologies and Pipeworks Studios created Rival Peak, a new kind of interactive experience that is partly a game and partly a reality show. The audience consists of real people, but the characters they’re watching are not. And starting today, the show will also be available on the iPhone in addition to Android and the PC.

The quasi-reality show stars 12 artificial intelligence characters who are contestants in a Survivor-like competition set in an animated Pacific Northwest. The live audience can influence the outcome of the contest by grinding away at tasks and helping their favorite characters. The show runs 24 hours a day, seven days a week, and its host is Will Wheaton (Star Trek: The Next Generation, TableTop board game show on YouTube). He runs the weekly recap show that summarizes each week’s events.

In an earlier interview with GamesBeat, Genvid CEO Jacob Navok (one of our speakers at our upcoming metaverse event) said that the concepts and vision behind the game have been in the works for a decade, first at his startup Shinra Technologies and more recently at Genvid. It is a show that is only available through the technologies of cloud gaming and streaming, he said. But the execution of the whole project has happened mostly during the past six months.

Lindsay Gupton, CEO of Pipeworks, said in an interview with GamesBeat that he had been talking about the idea with Navok for three years. No other company had the technology to pull off something like this, Gupton said. Pipeworks did an interactive stream on Twitch where the audience could vote on the results about five years ago. But Rival Peak tapped the notion of getting the audience to participate in a bigger way.

“We think we have helped invent or stumble upon a new medium,” Gupton said. 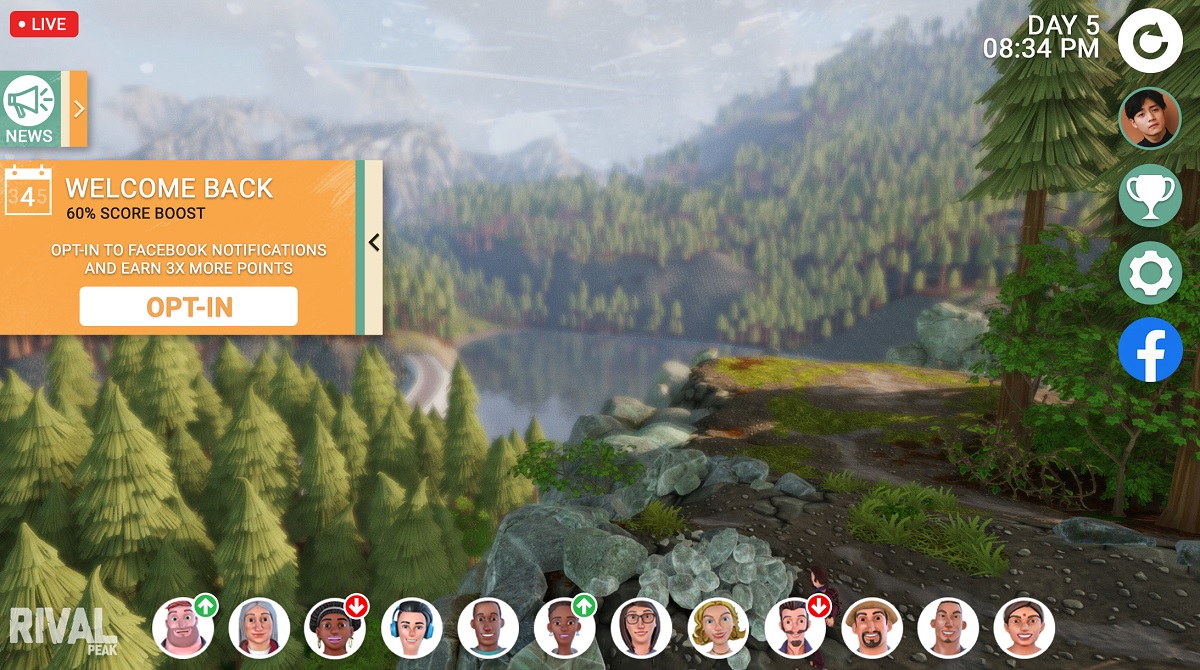 Above: Rival Peak was built in six months by Pipeworks.

The 22 million views are for the weekly wrap-up show Rival Speak. Episode 5 alone has more than 6.5 million views. The Rival Peak “instant game” livestreams have seen more than 600,000 unique viewers interact with the AI “contestants” and their surroundings, with peak concurrent usage of more than 46,000 viewers. The humans decide what kind of environment the contestants will run into.

Gupton said that the idea was to have the audience behave as a kind of god, helping via collective voting how to make the characters behave. There was also a lot of inspiration from Survivor, Lost, The Hunger Games, and The Sims, Gupton said.

“It’s looking at tropes in all of those things, where the audience is in on it like in Survivor, but there’s a story like in Lost,” he said. “You almost have to teach the audience what this is.”

“The audience has to realize they have real agency,” he said. “Fans get together and create their own audience narratives as to what might be happening.”

All told, Facebook users have consumed more than 25 million minutes of the Rival Peak franchise. The show is most popular in India, Mexico, Brazil, and the United States. Users have generated over 400 million points to save the characters from elimination.

Navok calls the game the first-ever “MILE,” or “Massive Interactive Live Event,” where millions of people can control the direction of the story.

A group of “puzzlers” in the audience solved riddles that helped the castaways traverse the map, but a sudden earthquake stranded half the cast. As they ran through the haunted woods to survive, they uncovered a secret bunker, only to be forced into a post-apocalyptic wasteland by a mudslide, Navok said. Fans pieced together that the mysterious Tangram Labs, the so-called “sponsors” of Rival Peak, might have sinister motives.

Pipeworks has been around for 21 years, working on jobs for Wizards of The Coast and games like Terraria. Pipeworks has 150 employees, and it was acquired in October by Sumo Group for $100 million.

How Often Should You Purchase New Underwear – 2020 Guide