Big companies dream of becoming so ubiquitous that all of its competitors are considered off-brand, but only a few have actually managed to achieve this. If you need a tissue, you ask for a Kleenex, if you want to learn more about something, you Google it, and if you want to play with plastic building blocks, you’re looking for a LEGO set. LEGO has so utterly dominated the construction toy market that even the “knock-offs”, like Duplo, Technic, and Bionicle, are still made by LEGO. Mega is the only real competitor to LEGO and there’s a good chance you’ve never even heard of it. If you read headlines before you click on articles, you probably know what I’m about to say next: there’s a new building block toy at school, it’s called Nanoblock, and it’s already eating LEGO's lunch.

Nanoblock, as the name suggests, are like Lego, but smaller. This may not sound like a selling point, but you’d be shocked to see how dramatically shrinking LEGOs down can change the process and experience of building with them. The bricks are so small in fact that Nanoblock makes special slotted tweezers to help you work with them. The benefit of micro-blocks is the amount of detail they can pack into such a small build, and for anyone that collects or builds LEGO sets as a hobby, you know how valuable space can be.

LEGO has a sizable gap when it comes to minifigures. LEGO figures may be iconic, but they're only made up of three or four pieces. Minifigures are great for playing, but not great for building. LEGO has made a few attempts over the years to introduce different kinds of figures, most recently with the Brickheadz line, but models and environments will always be at the core of LEGO. Unfortunately, LEGO sets take up a lot of space, and all collectors eventually get to a point where they have to take their displays apart to make room for their latest build.

Nanoblock fills in that gap beautifully. Every Nanoblock set is an individual mini-figure that can easily fit in the palm of your hand. You can fit dozens of Nanoblock figures on a shelf, and trust me, once you start building them you won’t want to stop. 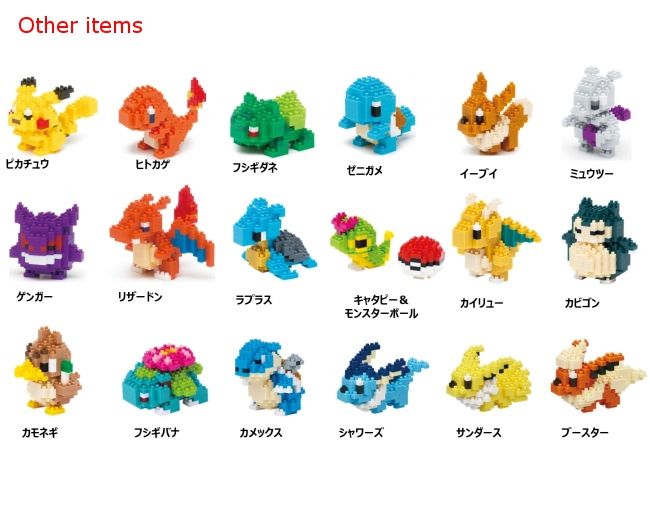 There’s a very methodical approach to the way Nanoblock instructions are designed. You build each layer of the figure starting at the bottom and working your way up, almost like a 3D printer. It’s exciting to see the profile of your figure start to emerge with each new layer, especially when you’re building a familiar character like Crash Bandicoot or Pikachu.

The licensing is incredible. Available sets include Pokemon, Kirby, Dragon Ball Z, Sonic the Hedgehog, Hello Kitty, Evangelion, and Spy X Family, just to name a few. There are also generic animals and larger models like pirate ships and Japanese castles too. The newest line, called Brilliant Shining version, are made of translucent blocks that can be mounted on a light-up panel that makes them glow.

Nanoblock comes from Japan and has been around since 2008, but is just now popping up at convention and hobby shops around the US. You can find them on Amazon where most figures cost around $15. If you’re looking for a new collectible obsession you’re in for a treat. If you weren’t, well, I’m sorry I did this to you and I hope you have fun filling your shelves with tiny Pokemon anyway.

Games Inbox: Are the Pokémon Diamond and Pearl remakes a disappointment?

Lost Ark: Where To Find Every Mokoko Seed In Island Of Time

Great Borderlands Collection Is Free On PC, And Another Mystery Freebie Is Coming Next Week