Not every boss in V Rising is an evil bandit lord or powerful corrupted wizard. The monstrous creatures that inhabit Vardoran can pose just as large a threat to your vampiric ambitions. Situated in a remote cave, The Ferocious Bear lives up to its name, and will assail you with powerful attacks that can swiftly combo together to end your existence.

This guide will help you learn where to find the Ferocious Bear, the best strategy for defeating it, and what you can hope to be rewarded with, should you emerge victorious. 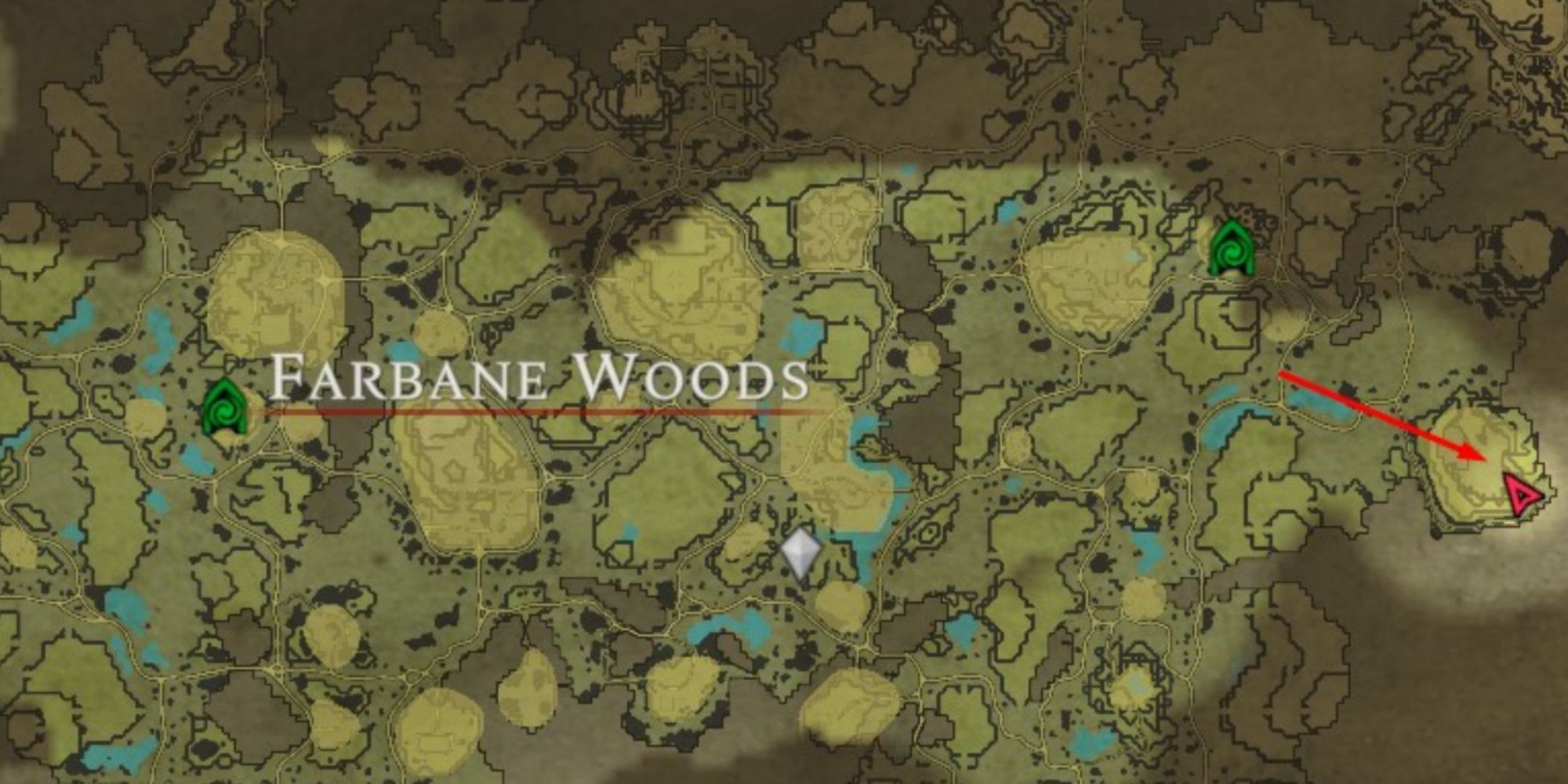 The Ferocious bear can be found in The Bear Cave to the extreme East of Farbane Woods. There is a long narrow track leading to the actual cave, and the boss will be found inside. There are no enemies along the path and the boss will never leave the actual cave, so there are no risks associated with tracking down the beast, and the use of a Blood Altar is not necessary.

During the fight, it is possible to reset The Ferocious Bear, by leading it out of the cave. This can be used if you are about to die, but be careful not to accidently reset the combat as the boss will heal back up to full health, and you will lose all your fight progress.

Battle Strategy For The Ferocious Bear 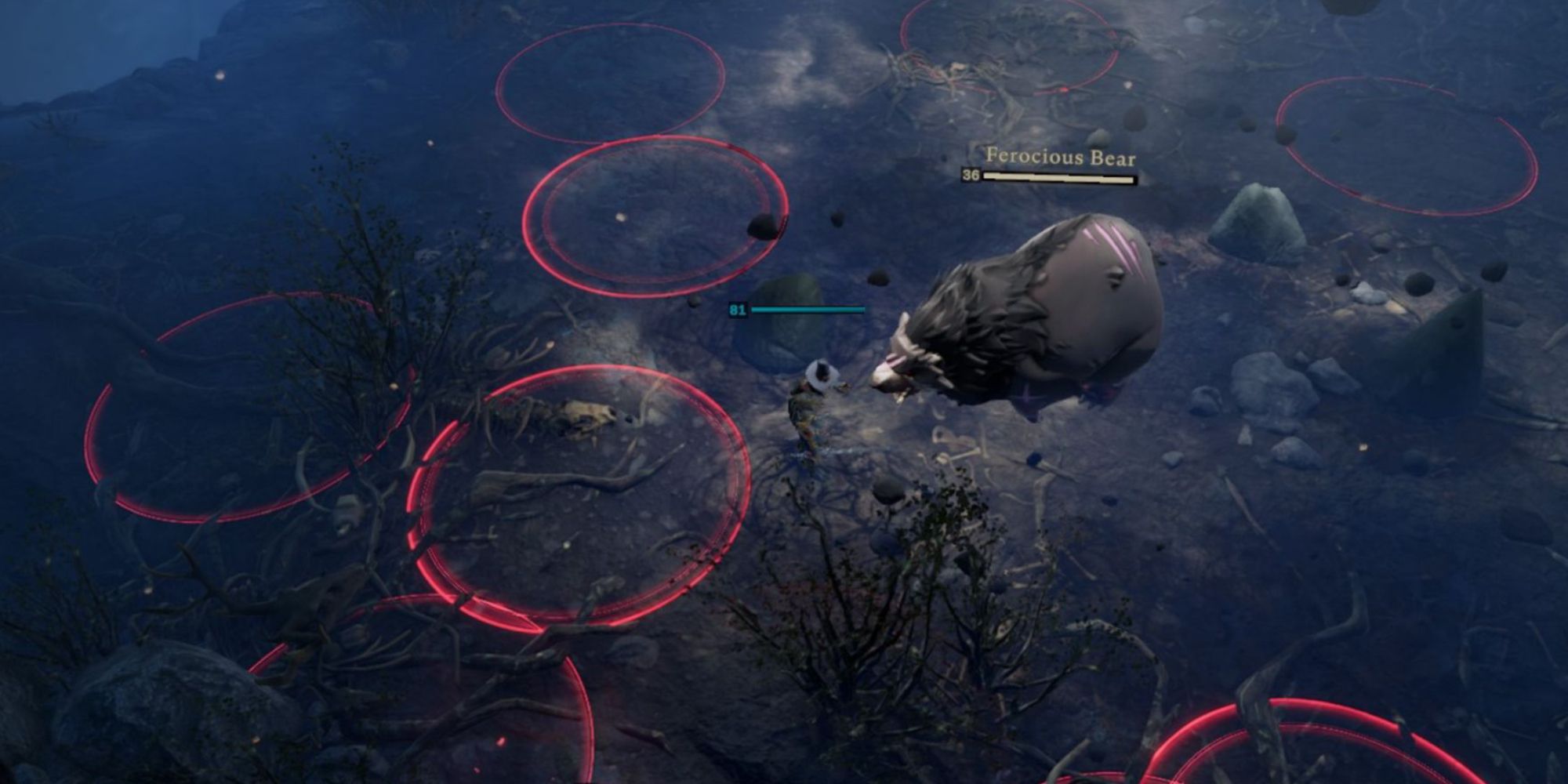 The Ferocious Bear does not possess many abilities, but its moves are all hard hitting and impactful. Its first ability is an AoE ground slam, that will create a ring of falling rocks, which then split into another, smaller ring of rocks. Both the initial slam and the falling rocks will cause you to be knocked back, and this ability can combo into itself by chain knocking you, especially if you happen to become pinned against a wall.

The best tactic for this ability is to utilise your travel ability as he rears up to slam the ground. If you continue to run away then you should be fast enough to avoid every rock ring and not have to worry about micro-dodging. This will be a large dps loss, but it is a very safe way of dealing with the rockfalls.

The Bear's next move is a targeted charge attack, that deals very high damage and will knock you back a fair distance. If you are far enough away from the boss then you can simply run to the side, otherwise keep circling the Bear in order not to remain in its line of sight. The charge is exceptionally fast, and can easily catch you out if you are standing still for an ability.

The Bear will often swipe at you with a fast claw frontal. There is not much you can do about this as the attack as it is so swift, but thankfully it only deals low damage, so some Vermin Salves should be sufficient to help you stay topped on health.

As the Bear loses progressively more health, it will enter its Enraged Phase, causing it to deal more damage and move faster. You can tell when it has become enraged by the red glow emanating from the boss. Just keep playing the same way as before but be even more careful not to get hit by the charge or the rocks.

The fight is typically quite long as you will have to be running away from the boss quite often, so be patient and continue to wear it down with ranged spells and weapon abilities. Merciless Nightstalker Armour and a Merciless Copper Weapon is sufficient gear, as well as Veil of Illusion, Shadowbolt and Chaos Volley for your spells.

There is currently a cheese tactic for this boss, whereby you can run up the ramp at the back of cave, firing abilities as you go, before jumping down off the ledge. The bear will path back down towards you and by the time it reaches you, you can use your movement ability to travel safely back up the ramp.

Recommended abilities for this strategy are Veil of Chaos, Aftershock, and Chaos Volley, as the double dash and fast cast speeds let you hit whilst on the move. This tactic will allow you to dodge nearly all the boss's abilities and allow you to kill it, even with a very low gear score. 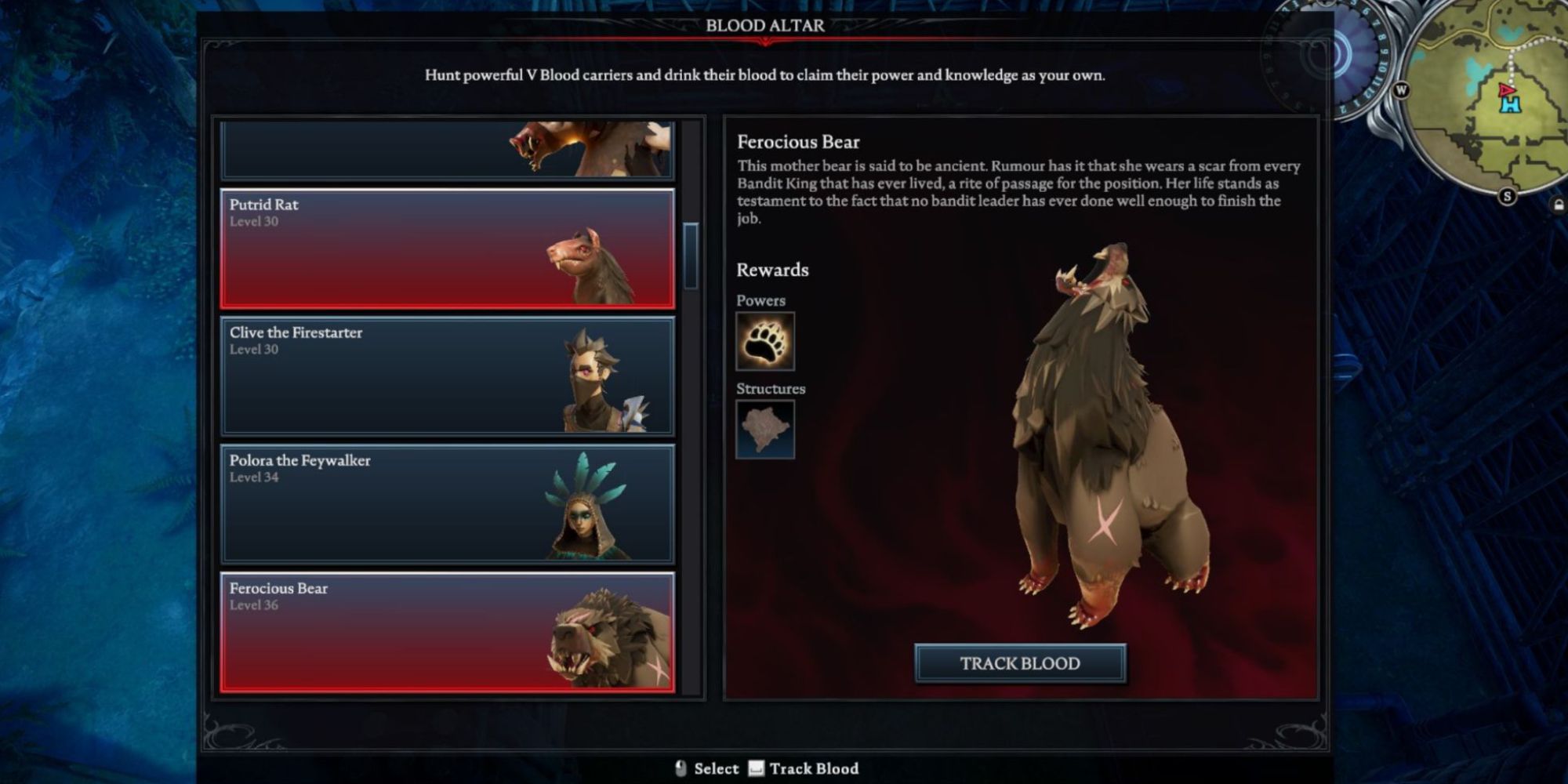 The Ferocious Bear only grants you two rewards, with the first being the Bear Form Vampire Power. As its name suggests, this will allow you to turn into a giant bear to rampage around the map. The form provides increased damage resistance, speed, resistances, and health regeneration. Unlike Wolf and Rat Form, it is not removed by taking damage, and can be used in combat to tank a swarm of enemies or another player. Its attacks will allow you to destroy massive resources, and can even be used in place of bombs, should you wish to destroy certain barricades.

Defeating the Bear will also allow you to craft Fur Rugs, should you wish to show off your triumphs within your own castle. Both Brown and Grey Rugs cost Animal Hide, and can be found in the Carpet section of your building tab.