Horizon Zero Dawn is an excellent game for the most part, although as I’ve written before, its one major flaw is how lifeless its cities are. When you’re out in the wilderness and overcome by the sheer scale and sublimity of nature, Zero Dawn is outstanding. The second you step foot in Meridian or Sunfall, though? The smoke dissipates into thin air and the mirrors are all facing each other like that Spider-Man meme – “no, it was your fault the entire illusion fell apart!”

This is particularly unfortunate because, believe it or not, Zero Dawn should have phenomenal worldbuilding, not just in aesthetic terms, but in how wild and wonderful every single seam of the overall tapestry independently is. Did you know, for example, that there is a cult of people who drink machine blood, which, as you and I both know, is literally just biofuel? Did you know, dear reader, that there are entire sunken civilizations – essentially the Lost City of Atlantis via technophilic, tribalistic dystopia? There are so many things that Horizon has at its disposal, referenced in datapads and casual conversation – so why were so many of them left on the chopping block with Zero Dawn? Time, probably. Budget, resource management – there are loads of reasons for why, and they’re valid. In the Forbidden West, though, things are going to be different. In the Forbidden West, Horizon is going to show you what Aloy’s world is really about.

“Foolhardy blazons and madcaps all, they were brought to me near death, poisoned, mortally-wounded, or driven witless by what they had experienced in the lands beyond the Daunt,” the description reads. “With such wounds, it was all I could do to ease their pain and try to make notes from their ranting.”

The above comes from a datapoint in Horizon Zero Dawn simply and fittingly named “Forbidden West.” It’s a fairly lengthy glyph, mind, and goes on to describe all manner of curios located beyond the Daunt. Fortunately, pretty much every single piece of information included in this account is more intriguing than anything in Zero Dawn, bar maybe the Grave-Hoard or Gaia Prime. 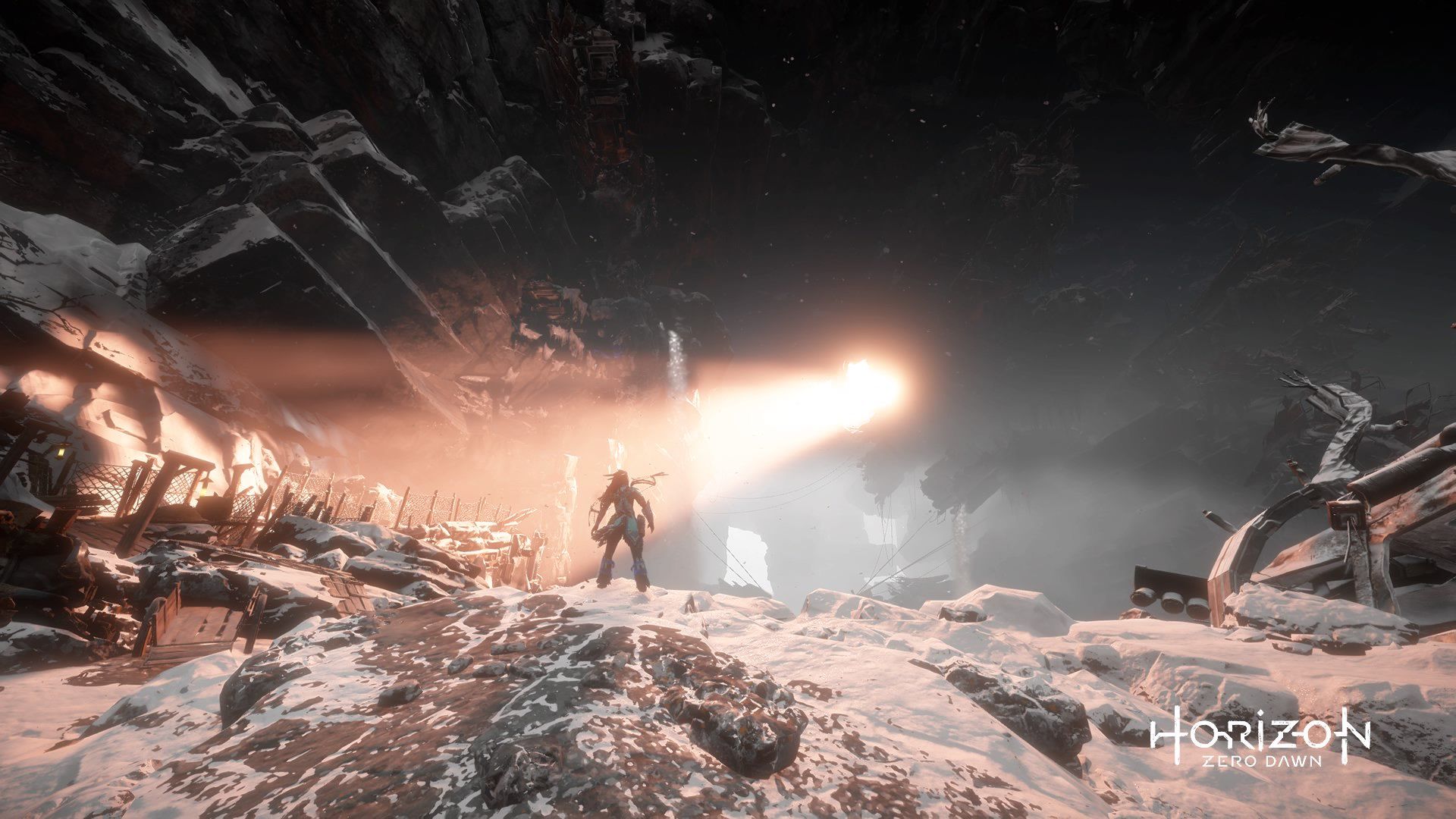 I think it’s worth remembering that Operation: Enduring Victory – Dr. Elisabet Sobeck’s plan to save life in the long run by sacrificing it in an effort to slow the spread of the Faro Plague – involved immense terraforming all over the world. Sure, Horizon Zero Dawn is gorgeous and devastatingly broken in equal measure, but we’ve only seen Utah. The Forbidden West spans the entire region from Utah to the Pacific Ocean, meaning there are all kinds of biomes and unique environmental features we haven’t even caught a glimpse of yet,

“Though each account differs, it is certain that the Western lands are most unlike our own,” the Forbidden West datapoint reads. “Some crossed deserts of palest white, others deserts the color of fire, or even limitless sweeps of blue sand that seemed to reflect the sky above, broken only by the remains of ancient machines.”

I’m not sure about you, but I reckon that sounds incredible – “blue sand that seemed to reflect the sky above, broken only by the remains of ancient machines”? Trippy, inspired, visually ridiculous – I love it.

The datapoint goes on to speak of animals with glowing eyes, weird birds the color of “kites and fireworks” – again, the visual terminology here is doing an absurd amount of heavy lifting. Also, the birds speak in human voices, apparently. Are they parrots? Nah, we got oliphaunts in the latest trailer, which means they categorically need to be fellbeasts. I hope… 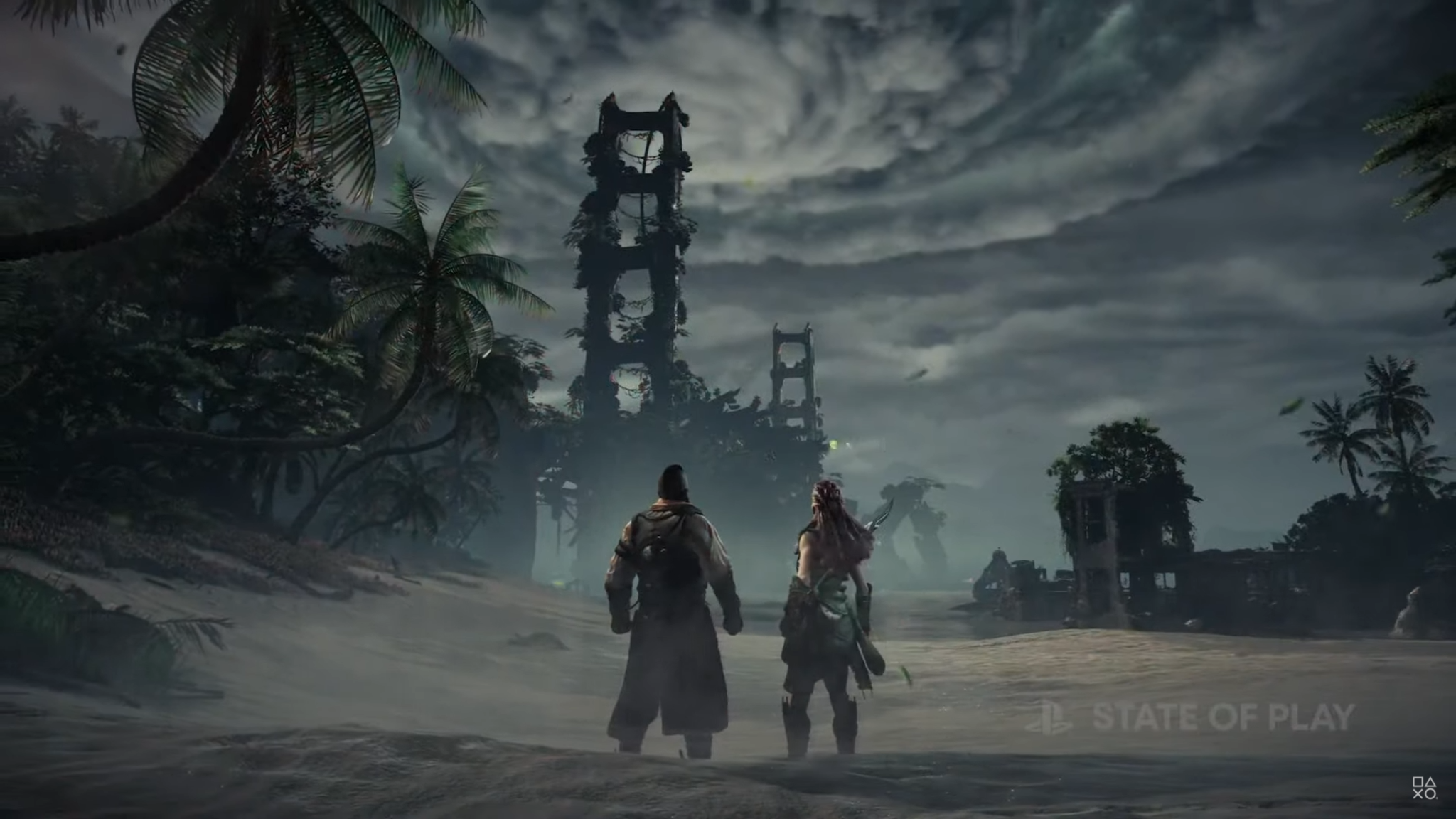 “Most extraordinary of all are those reports of a lake one hundred times the size of the Daybrink,” the datapoint continues. “So wide the far shores cannot be made out, and so deep that an entire city of the ancients stands drowned within. The water is sour to the taste, and sickening, and it is said to rise up and push back against those who attempt to cross.”

This feels like a classic case of foreshadowing, putting a very obviously related datapoint message in the first game of a series designed to point to the yet-to-be-announced sequel. I mean, hindsight is 20/20, so it’s pretty obvious now for anyone who has gone back to Zero Dawn ever since Forbidden West was revealed. Still, I don’t think Guerrilla could get away with retroactively doing away with all of this amazing scenery. Sure, it’s possible to say that people came back in some kind of lucid frenzy and described impossible phenomena after drinking too much machine blood – let’s be real, though. We’re going to see plenty of machine blood in Horizon Forbidden West, and if we haven’t got talking birds and lost underwater cities filled with robot sharks, I’m going to be fairly disappointed.

“It would seem that dead cities without number have been consumed by the shifting dunes in the West, their skeletal towers mired in seas of sand,” the datapoint reads. “The wind is heard to sing a low, mournful song through these ruins, or through the skeletons of vast metal birds now fallen, or over great metal bowls now filled with depths of black water, where fish dart like shooting stars. That song of ruin, rising from a hum to a howl, still haunted these men and women as they thrashed and sweated in unquiet sleep.

“With their fingernails, dying witnesses have scratched out impossible shapes, or, if they still possessed several limbs and vocal organs, mimicked jerking movements and imitated awful sounds, all belonging in the throes of madness.”

The description ends with the machine blood drinkers, who have apparently developed metal teeth like that French bicycle-chomper from the Guinness World Book of Records. There are nocturnal children as pale as ash who all bear the same face, a tribe who dig holes during the day and refill them at night – er, bit weird, mate – and people who scour the seas in “thin” boats. If Zero Dawn’s main problem was lifeless cities, Forbidden West’s lore already looks as if it’s set to take that issue and eradicate it completely,

I’m most excited for the talking birds, though. Robot dinosaurs and parrots who drink machine blood – talk about inspired.