The Citadel is a colossal space station home to 13 million people from all over the universe, like an intergalactic New York City. Commander Shepard visits the Citadel in every Mass Effect, and it's always my favourite location—especially the version we get to explore in the first game. It's a bustling hub of trade, diplomacy, politicking, and awkward dancing when Shepard has one too many shots of Serrice Ice Brandy.

It's BioWare's take on an O'Neill cylinder—an orbital human settlement proposed by physicist Gerard K. O'Neill. In his 1976 book The High Frontier, O'Neill imagined future spacefarers living in vast rotating cylinders with simulated atmosphere, gravity, and sunlight. Different takes on the concept have appeared in other media, including early Hideo Kojima game Policenauts and Christopher Nolan's Interstellar, but the Citadel beats them all.

O'Neill's book is famous for its evocative illustrations—including one that was almost certainly the inspiration for the Presidium. This is the first district of the station you visit in Mass Effect, and it's an impressive sight. The pristine white architecture, simulated blue sky, and lush vegetation reflect its importance as a centre for finance and politics. But it also means it's full of rude, haughty high society types. The real people live down in the Wards. 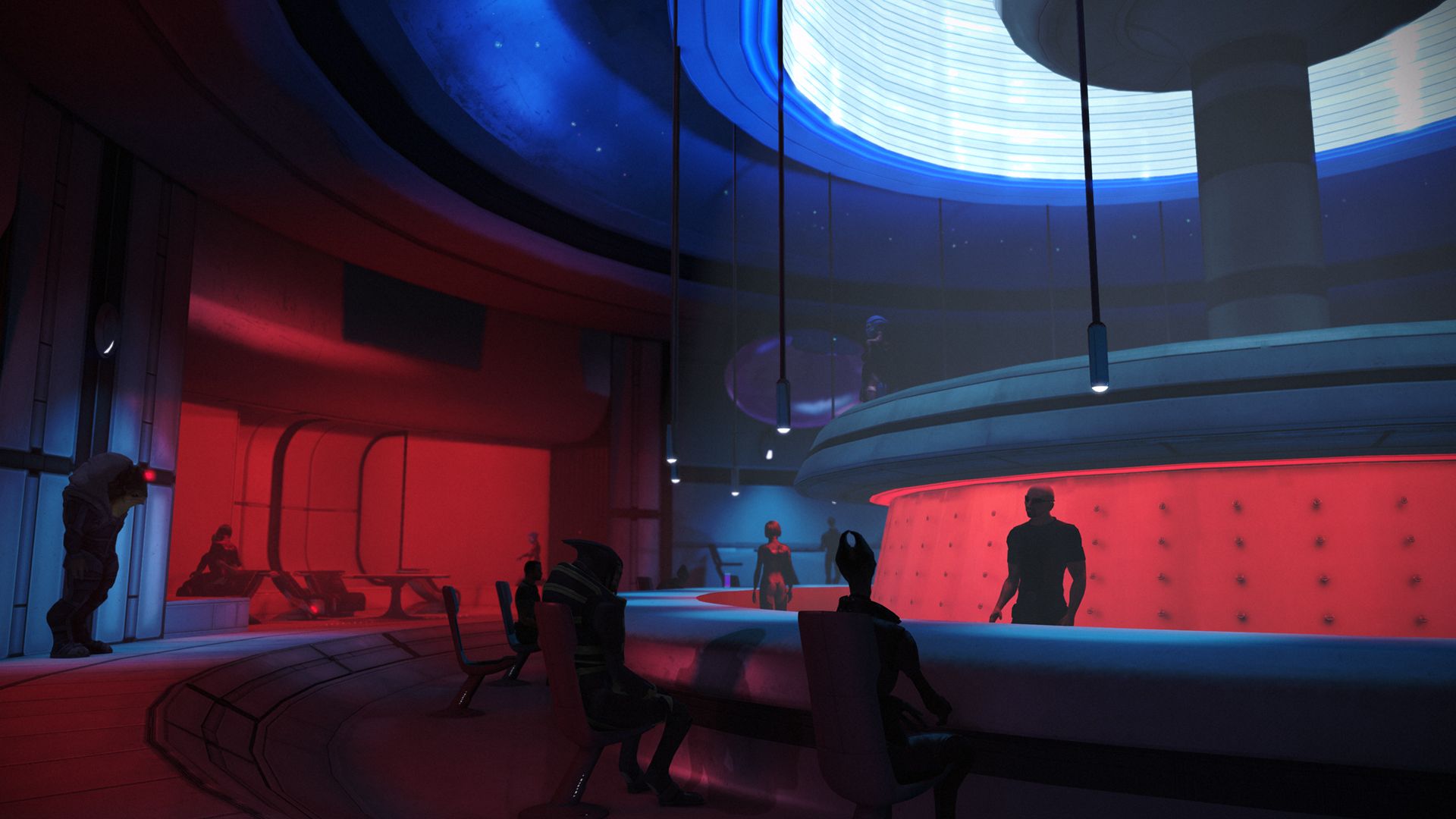 Down here you'll find markets, residential districts, and seedy clubs—as well as the headquarters of Citadel's cops C-Sec. Compared to the Presidium, the Wards are it's dark, claustrophobic, and dangerous, but that's exactly what makes it so interesting. The gloomy neon-lit ambience of the Wards has its own charm, and you get an incredible view of the station's arms stretching out into space, bathed in the violet glow of the nebula surrounding it.

There's a nice air of mystery about the Citadel too. The truth of its creation is eventually revealed in the sequels, but in the first game you're given only a few curiously tantalising clues about who could have built this massive structure and why. The Keepers—bug-like creatures of uncertain origin who silently maintain and repair the station—provide a compelling nugget of lore to ponder as you see them tapping away at computer consoles.

Some people think the Citadel is boring. Me? I never want to leave. I replayed the original Mass Effect recently and spent as much time there as I physically could—working through all the available sidequests and speaking to every weirdo who'd listen. I even scanned every Keeper, which anyone who's played the game will know is a particularly thankless task. I just love the atmosphere of the place, and the sound of Jack Wall's haunting music.

The Citadel is the quintessential RPG town—even down to the genre cliche of it being sharply divided between the rich and the poor. It's a calm, strangely comforting place where you can find merciful respite before you embark on the next intense, emotionally charged mission. It's fun to just hang out, overhear random conversations, and learn about what it's like to live there in low stakes quests that exist purely to create a sense of place.

Mass Effect will always be a grand space opera about exploring the cosmos, but The Citadel is a rich enough location that you could set an entire standalone spin-off there. Imagine playing as a C-Sec detective investigating crimes in different wards, getting tangled up in the corruption behind the scenes. I'd love to see a lower key Mass Effect game like this. One that expands the universe, but in a much more contained way.

Like most things in Mass Effect, the more that's explained about the nature of the Citadel and its history, the less interesting it becomes. By the end of Mass Effect 3 you'll have learned all about its origins, the Protheans, the Reapers, and just about everything else that's teased or hinted at early on. But when Shepard first arrives there aboard the Normandy SR-1, when the wonder and mystery are still intact, video game settings don't get much better.

Fortnite gets new subscription service for £9.99 a month

1Kosmos Secures $15 Million in Series A Funding from ForgePoint Capital