Not enough people have played Thronebreaker: The Witcher Tales. This spin-off is a quality RPG with writing, voice acting, and tricky moral conundrums on par with The Witcher 3. But I get why people might have let it pass them by. It's not a big, sprawling open-world adventure where you run around a stunning fantasy world slaying monsters. Instead, it's essentially a single-player campaign for the digital card game Gwent.

When I played The Witcher 3, I didn't give a shit about Gwent. The only time I played it was when the game forced me to as part of a quest. I know people who loved it, but I took every opportunity to ignore it. So when I first heard about Thronebreaker, I can't say I paid much attention to it. I figured it would be a bunch of boring Gwent card battles strung together with cutscenes. But I was wrong. So wrong. Maybe more wrong than I've ever been.

In Thronebreaker you play as Meve, a warrior queen with a gleaming suit of golden armour, a broad Yorkshire accent, and a no-nonsense approach to ruling. She's amazing, and easily the equal of Geralt of Rivia when it comes to being the hero of a Witcher story. Playing as royalty might not sound as exciting as being a potion-swigging monster killer, but Meve is the kind of monarch who'd rather have a sword in her hand than a goblet of wine. 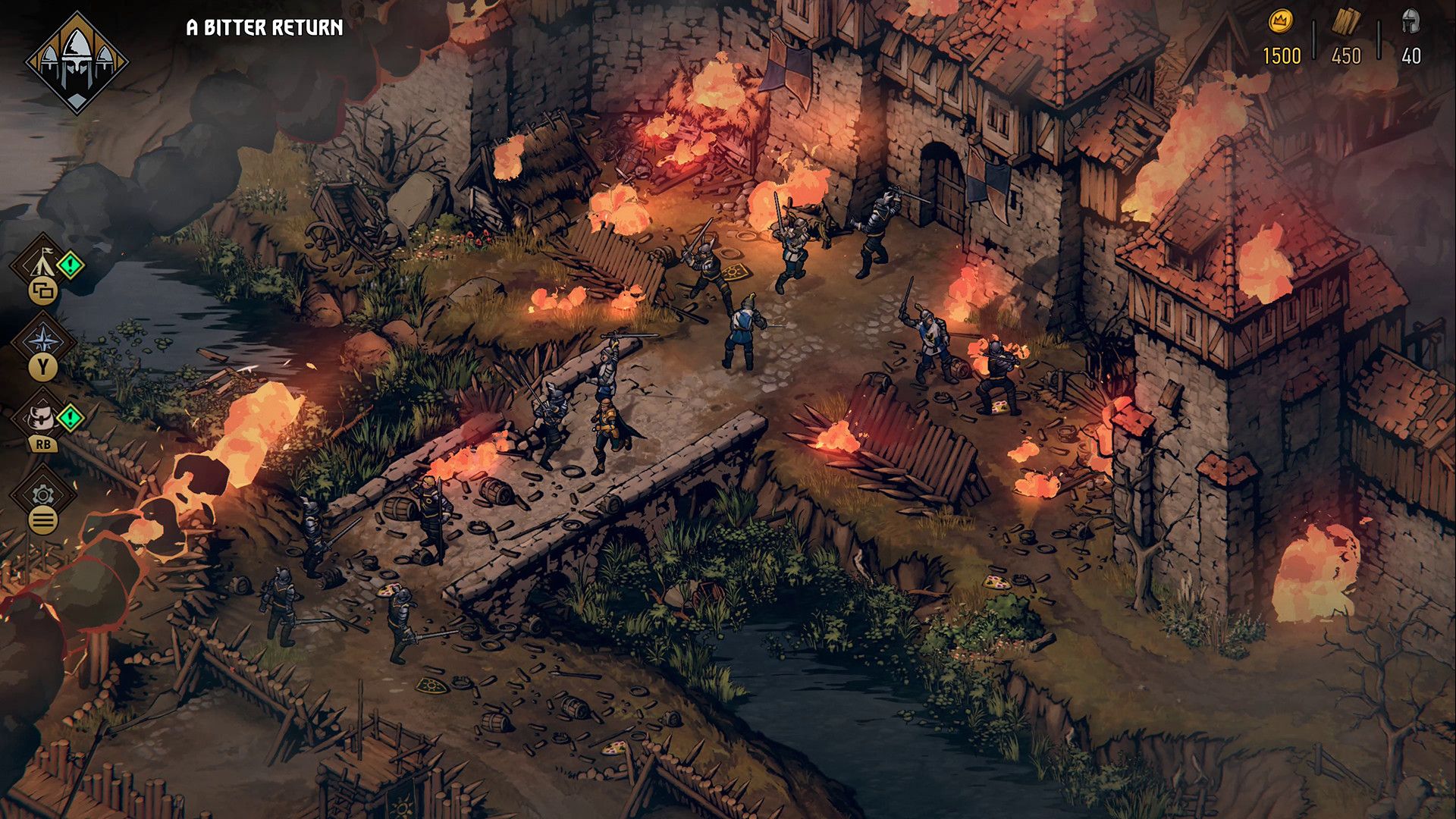 The story concerns the Nilfgaardian invasion of the Northern Kingdoms, which Geralt witnesses the immediate aftermath of in The Witcher 3. Meve has been driven from her land and is on a dangerous mission to forge alliances, rebuild her army, and drive the invaders back. While the White Wolf is a drifter who goes where the coin is, Meve is a very different protagonist. She has a home, a family, and a responsibility to protect her subjects.

Thronebreaker is split into two distinct halves. First, there's a freely explorable overworld where you can visit towns, talk to people, tackle sidequests, and loot treasure. But when it's time to fight—whether you're slaying marauding ghouls who have been harassing your subjects, brutally reminding bandits whose land they're ransacking, or defending against a squad of Nilfgaardian soldiers—the action suddenly shifts to a card-scattered Gwent table.

In Gwent, two sides play cards on the table, using their special abilities to attack rival cards and earn strength points. A player wins a round when they have more points than their opponent, and both players are out of cards. There's more to it, but those are the basics. It's meant to simulate the push-and-pull of a battle, and the cards in your deck come in the form of units—as well as powerful hero characters like Geralt. 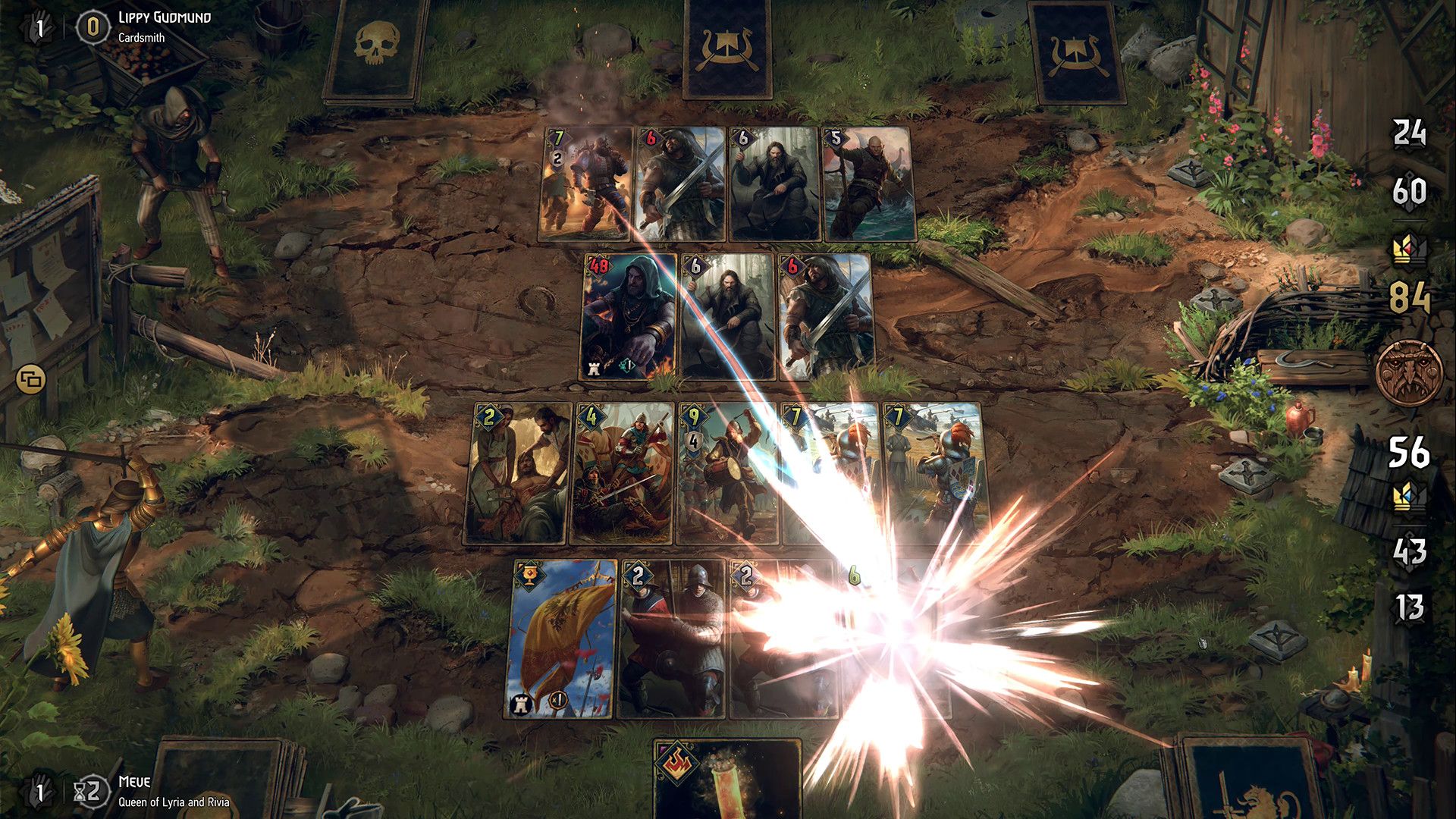 The beauty of Thronebreaker is that you don't have to be good at Gwent to enjoy it. You don't even have to like Gwent. Play in Adventurer mode and you can skip any battle you lose, which is handy if you're finding a certain encounter too tricky or you're just eager to continue the story. Bonebreaker mode is there for Gwent veterans looking for a challenge, but casual players are just as well catered for. It's wonderfully approachable.

The developer also has fun playing with the Gwent format, including 'battles' that represent other activities. This might be trying to outdrink a dwarf in a tavern, or protecting Meve from a landslide where the fast-approaching boulders are represented as enemy cards. You can also tackle optional puzzle battles where you're given a set deck and have to solve a problem in one turn, making tactical use of your cards' varied special abilities.

The card battles are entertaining, and the more I play, the more I'm starting to understand the appeal of Gwent. But it's the narrative side of Thronebreaker I really love. As you wander the overworld, Meve is forced to make tough decisions—some of which can have major repercussions, such as losing hero cards when characters object to your actions and leave your retinue. You're constantly teetering along a precarious moral tightrope. 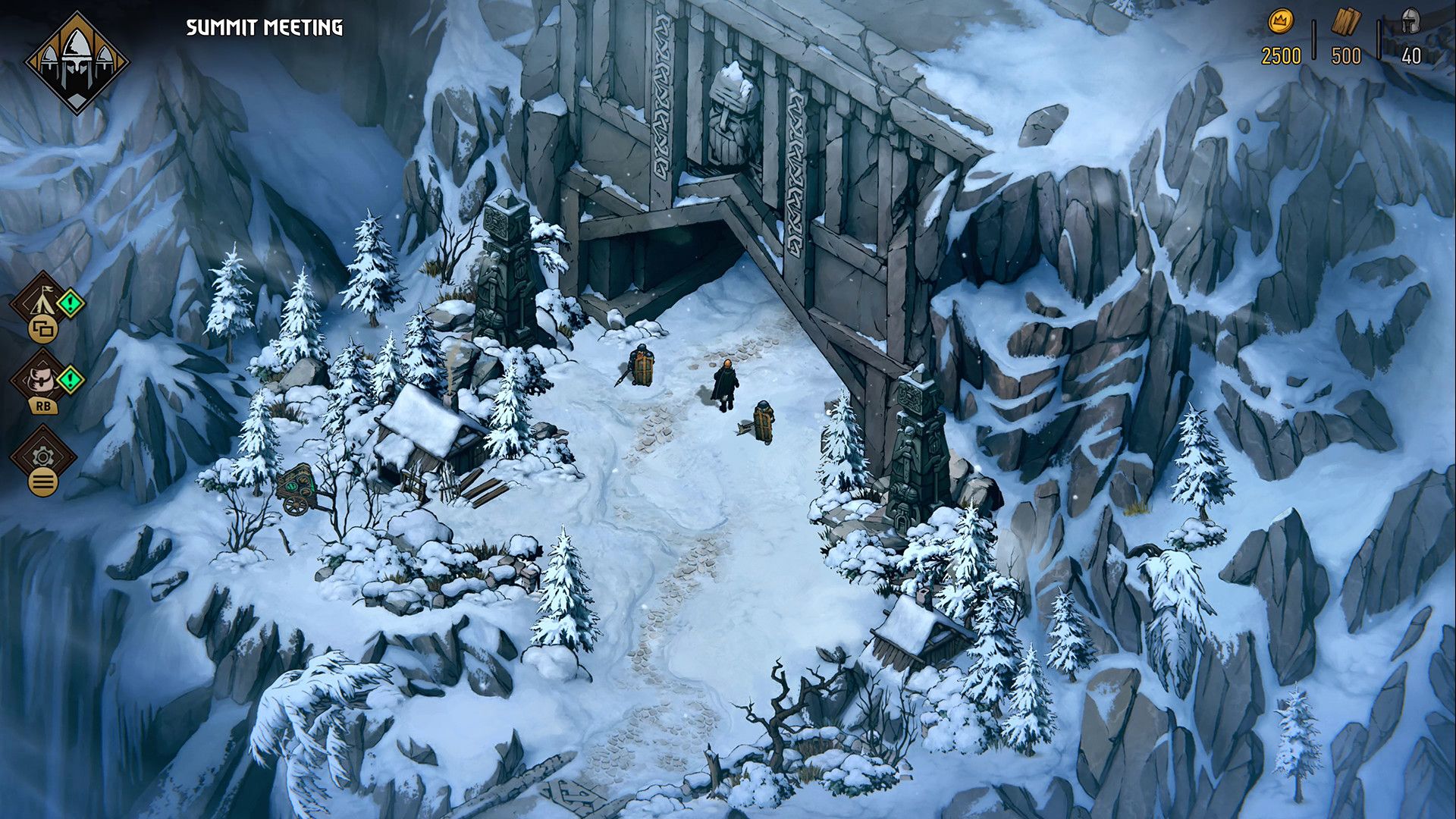 In true Witcher style, there's no binary good and evil in Thronebreaker. Things are murky, grey, and complicated—and what you think is the 'right' choice can easily come back to haunt you a few miles down the road. The writing is fantastic too, with vividly descriptive prose and well-acted dialogue accompanying gorgeous hand-painted backgrounds and character art. The fun, lively animations on the premium cards are sublime too.

You'd be forgiven for thinking, like I did, that Thronebreaker would just be a parade of Gwent matches with a story lazily bolted on. But play it and you realise that it's a proper, meaty Witcher story with all the drama, excitement, and horror you'd expect to find in a numbered sequel. It also gives you a fresh perspective on the world of The Witcher through the eyes of a character who is very different from mainstay Geralt—but just as cool.

Which PlayStation 5 is right for me?