United States Representative Alexandria Ocasio-Cortez’s attempt to prevent US military recruitment via Twitch failed to pass the House vote. The amendment, part of the H.R. 7617 Department of Defense Appropriations Act, ended with a final vote of 292 to 126.

Over the past year, the US Armed Forces found a new way to recruit prospects through Twitch streaming and esports teams. Although its respective channels have many followers, Ocasio-Cortez believes this method of recruiting is immoral. “War is not a game,” she starts off her impassioned speech, “the marine service… and issues associated with combat are too serious to be gamified in a responsible manner.”

Her stance included blocking the US military from recruitment practices on Twitch. This would prevent the US Navy and US Marine Corps from using funds to market toward Twitch’s young audience. Additionally, she shared that children are currently being targeted via online signup forms and advertisements to join the military.

“I believe that we should again restrain and restrict from explicit recruitment tactics,” she said, “…on platforms that children are using to play games from Animal Crossing to Call of Duty.” 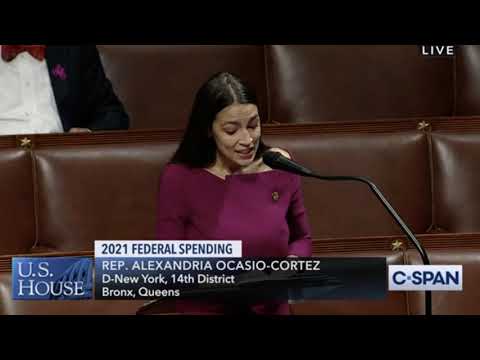 Military teams with plenty of spending

Although the US military isn’t wildly popular compared to other Twitch channels, it does have several channels for its respective branches. Additionally, the US Navy and US Army have had their own esports team since 2018. They mostly playing popular titles such as Call of Duty and Counter-Strike: Global Offensive.

Overall, the US military puts in an obvious amount of effort into recruitment with contests and giveaways while live streaming. The US Navy also confirmed with the US Naval Institute about their plan to spend nearly $33 million on online advertising in 2020.

Our military should not be recruiting children on gaming platforms, period. War is not a game. I was proud to work with @AOC to make this amendment in order & I will proudly vote yes when it comes to the floor today. https://t.co/kDQ8C7rWJx

Earlier in July, Twitch had stepped in to stop the US Army from announcing fake giveaways. One contest directed viewers to a recruitment page while advertising the possibility to win an Xbox Elite Series 2 controller. Impressionable viewers as young as twelve would then fill out the form and unknowingly agree to be contacted by a recruiter.

Additionally, last week the US Army halted their recruitment tactics on Twitch after banning viewers that questioned them about war crimes. This led to plenty of criticism as esports consultant Rod “Slasher” Breslau shared the news of their “unconstitutional bans.”

Thank you for everything you do 🙏

AOC’s presence in the gaming community

It’s no surprise that Ocasio-Cortez is fighting for protection against young gamers and viewers. She admitted to being a League of Legends player herself and connects with her audience by sharing her experiences.  Undoubtedly, she is also known to fight for the underprivileged that are taken advantage of by the US government. US Representative Gerry Connolly also shared Ocasio-Cortez’s sentiments over her proposal, stating it was a “smart amendment.”

I’m with you, @AOC. Joining the military is a serious decision, and it shouldn’t be made based on ads on gaming platforms.

This is a smart amendment, and I was proud to support it today. https://t.co/bMEolz32X9

Solo on Team Secret ahead of the OMEGA League: “As far as I know, they didn’t play any scrims at all”

Last Of Us, Uncharted Dev Talks About PS5 Transition