Damon “Karma” Barlow has officially announced his retirement from Call of Duty. Karma’s current team, Seattle Surge, released his statement regarding his retirement on June 3.

This is what the 26-year-old Canadian had to say after over seven years of competition:

Damon “Karma” Barlow has chosen to retire from competitive play. Congratulations to without question the greatest of all time. 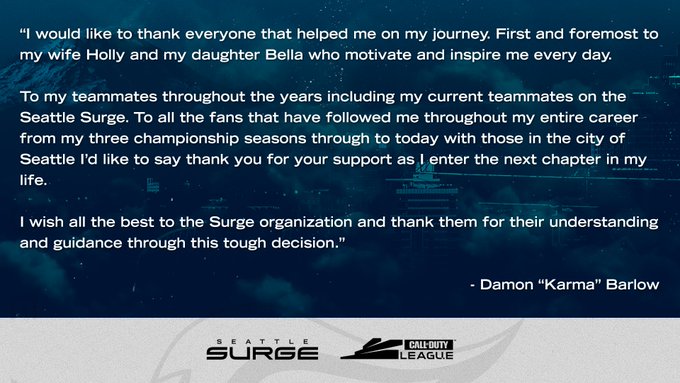 The Seattle Surge has been struggling to find its footing this season. They currently have only four match wins across six events. The Los Angeles Guerrillas are the only team currently doing worse than Surge with only three match wins. However, the Guerrillas just got their third win over Seattle at the last event in 3-1 fashion. Surge’s highest placement this year has only been 3rd/4th, which was at Chicago Huntsmen’s home series in March.

When Karma joined the Surge back in October, he appeared to be joining a star-studded roster. Unfortunately, the team fell flat at multiple events and looked like it wasn’t in sync. His teammates have voiced their frustrations about their struggles on social media multiple times. It appeared that the team was in a dark place after not winning a single match at their home series. This could have been the final push for Karma to retire.

Karma’s retirement has shocked the entire Call of Duty community. In seven years, across eight titles, Karma has won 24 major events and over $750,000 in total prize money. He has the most prize earnings across all COD professionals and comes in 3rd for most event wins. Ian “Crimsix” Porter and Seth “Scump” Abner, his teammates from Optic Gaming, beat his event wins with 33 and 28 respectively.

Furthermore, Karma has the most championship wins in Call of Duty history, hence his nickname, “The 3 Time,” which refers to how many championship rings he has. Karma won in 2013 on Team EnVyUs during Black Ops II, in 2014 on CompLexity Gaming during Ghosts, and in 2017 on Optic Gaming during Infinite Warfare. As the most decorated player in the history of COD, we’re excited to see what he does next.