TSM, despite being out, had the chance to throw a wrench into Gen.G’s plans. 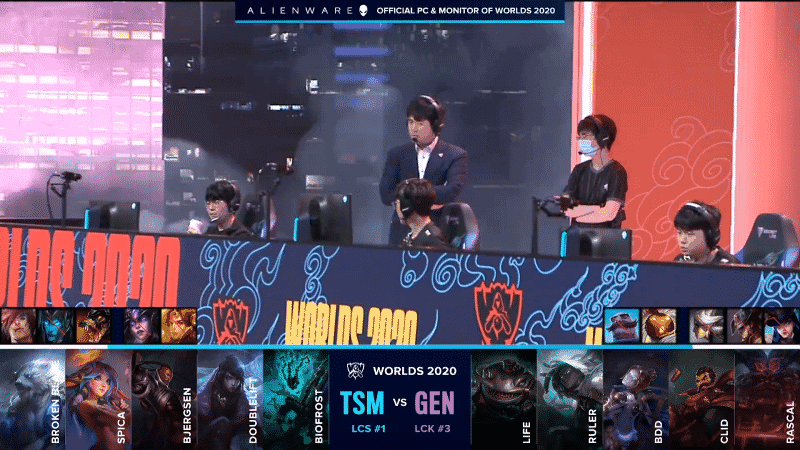 With TSM out of Worlds, Gen.G could pile the pressure onto FNC with a win, after they won the crucial match against LGD. Victory would place Gen.G in a strong position for the first seed, putting their series against FNC as the big deciding game, providing FNC could beat LGD. TSM picked up the first blood as TSM are able to punish Clid as he escaped the TSM jungle. Gen.G picked up one in return, while TSM managed to pick up a second as they start the game strong. The NA squad continued to dominate the early game, picking up key kills in the top lane, with the first turret taken top they moved to a near 2k lead.

TSM yet again got a team fight victory as they took down two members of Gen.G around the drake, then followed it up by diving Gen.G. There, TSM took the tower, two more kills, a turret, and a drake. TSM goes 5k ahead as they look to style on the LCK side. A 5v5 fight breaks out in the Gen.G jungle and some clutch plays from both sides see them share two kills apiece as the drake spawns on the map. Both teams walk away as TSM maintained a lead.

A fight is again forced in the mid lane after TSM picked up the drake, they get an early kill with Clid down. TSM moved towards the Baron, then turned to stop Gen.G. With TSM not wanting the fight they moved back to secure Baron as Gen.G looked to re-engage. But TSM left the pit and Spica used his Smite to survive, so he loses the Baron buff and dies in the process. In this crazy turn of events, TSM somehow managed to throw a free Baron buff.

As TSM farmed the Gen.G jungle, Gen.G decided to walk into the TSM base and take a middle inhibitor. As Gen.G pulled away they attempted to spring a trap inside the TSM jungle but nothing came of it. TSM gets caught out again in the mid lane and Gen.G picked up two kills. Though TSM did punish one kill in return as Gen.G moved towards Baron Buff. TSM attempts to take the Gen.G mid lane inhibitor but it goes horribly wrong as Gen.G Ace TSM and wins the game.