Nintendo has announced an upcoming presentation about the DLC ARMS character coming to Super Smash Bros. Ultimate. Masahiro Sakurai will provide a 35-minute in-depth look at the fighter on June 22 at 7 a.m. PT.

Nintendo announced that a character from ARMS would be coming to Super Smash Bros. Ultimate back in March. This character will be the first fighter in Smash Ultimate’s second DLC Fighters Pass. Despite revealing the character’s original series, Nintendo has given no hints as to which character will make the cut. Fans have certainly speculated that it may be someone like Spring Man or Twintelle. However, we won’t know for sure until next week.

Unfortunately, Nintendo also confirmed that it will not reveal any additional fighters during this presentation. The pandemic has undoubtedly limited the development team’s ability to work on this project effectively. As a result, Smash fans may have to wait a little longer to see who else will be joining the battle.

Join Super #SmashBrosUltimate Director Masahiro Sakurai on 6/22 at 7am PT for a roughly 35-minute video livestream featuring an in-depth look at the upcoming DLC fighter from #ARMS! 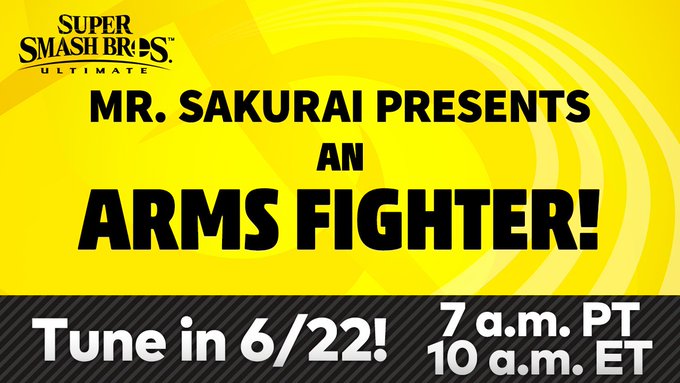 Fans can certainly look forward to learning more about Smash Ultimate’s ARMS fighter very soon. In addition, it is likely that Nintendo will make the character available shortly after Sakurai’s presentation, as has been the case in the past. So players may not have to wait much longer to get their hands on the game’s newest character.

With E3 no longer taking place this year, Nintendo has taken some different measures to reveal news to its fans. This has included traditional Direct-style videos with a focus on one specific game or series. Examples include this week’s Pokémon Presents and now the Super Smash Bros. Ultimate x ARMS presentation for next week. It has also included out-of-the-blue trailer drops on Twitter, as was the case with Paper Mario: The Origami King. Because of this, it is hard to predict when and how Nintendo will continue to release information about upcoming games. In any case, we can be sure they are doing their best to work on Smash and other titles given the circumstances.

An NBA Team Is Continuing Their Season in NBA 2K20

Orpheus’ Voice In Hades Was Based On Thom Yorke