Where does your enterprise stand on the AI adoption curve? Take our AI survey to find out.

Articulate, a software-as-a-service (SaaS) platform that companies such as Amazon, Oracle, and Morgan Stanley use to create training courses for employees, today announced that it has raised $1.5 billion in what is one of the biggest (if not the biggest) series A rounds of all time. The company is now valued at $3.5 billion.

Founded in 2002, New York-based Articulate claims to serve 106,000 companies — including 99 of the Fortune 100. Its two core apps include Articulate 360 for authoring training courses, which companies can then export to the web or host on their own learning management system (LMS). This includes millions of assets such as templates, photos, and videos, with additional tools that support live and on-demand training. And then there is an all-in-one product called Rise, which not only includes tools for designing new courses, but also enrolling learners and tracking their progress, which might be better suited to smaller companies without their own LMS. 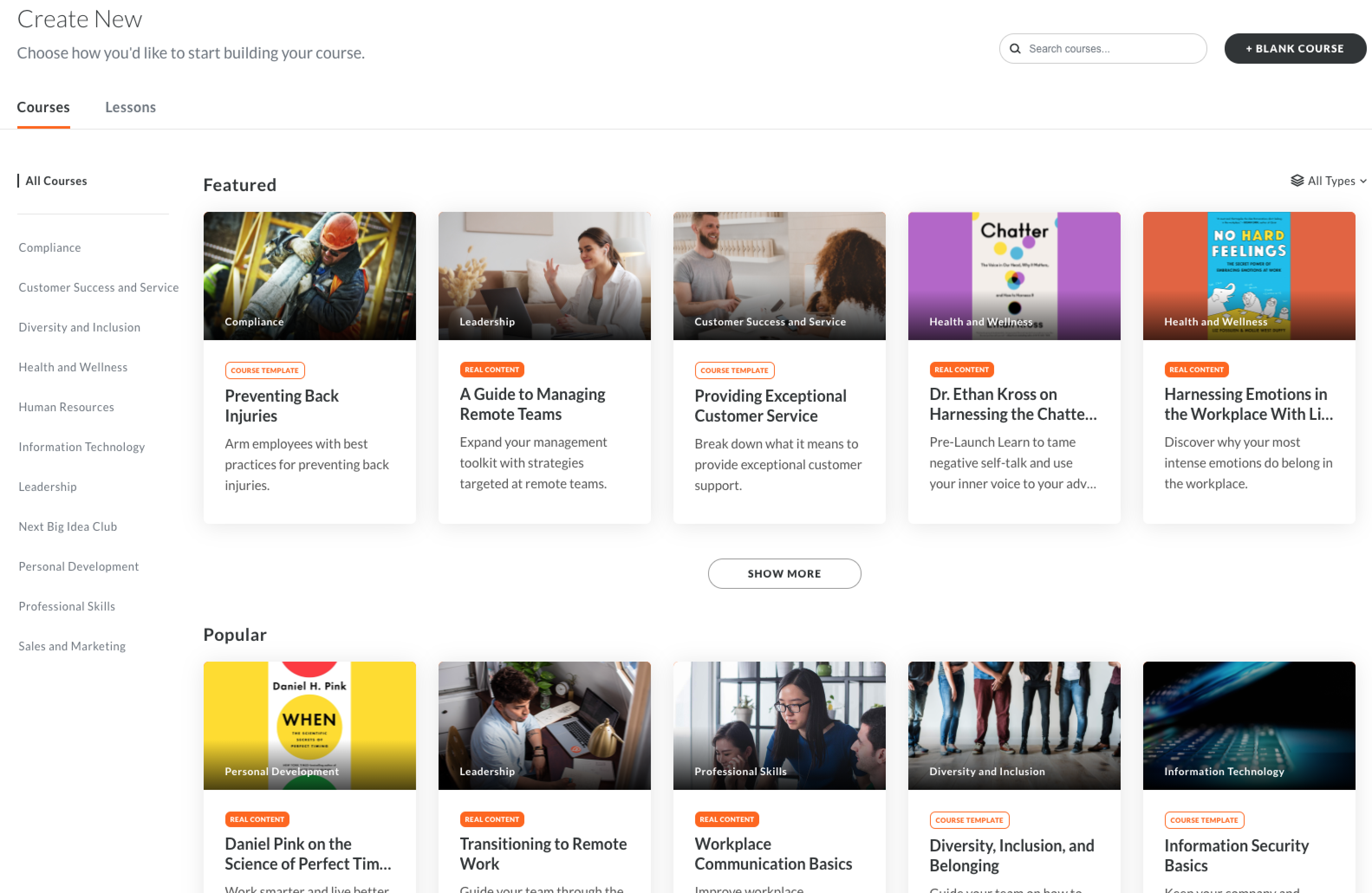 So why might a typical enterprise use Articulate? Well, if it has a new product to sell, they first need to train their various departments how to sell it, support it, and promote it. They need to be knowledgeable about the product, which requires training.

“You’d use Articulate apps to create online training courses for these audiences that walk through their products, highlight features, incorporate quizzes and knowledge checks to make sure they understand the messaging and the feature sets,” Schwartz said. “These courses include interactivity, rich media, knowledge checks and quizzes, and different ways to present content so they are interesting, engaging, and effective.”

On top of that, businesses can access reports and analytics around how the workforce is engaging with the various training courses, including completion rates. 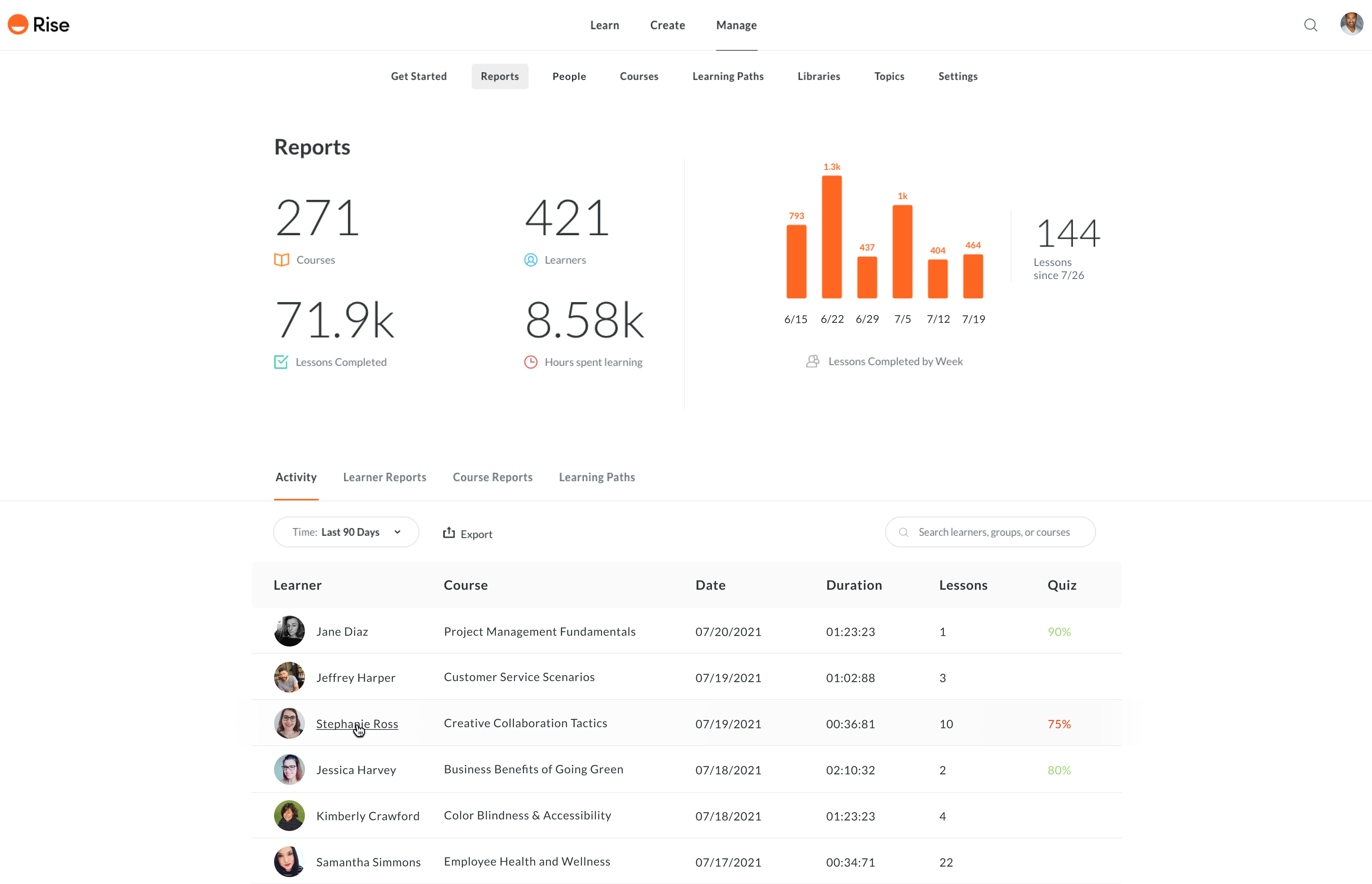 Above: Articulate: Reporting and analytics

Articulate has been entirely bootstrapped since its inception nearly two decades ago — that it has elected to raise $1.5 billion now is indicative of the size of the market it operates in, particularly with companies across the spectrum embracing “remote everything.” Moreover, the corporate e-learning market was pegged as a $205 billion industry in 2020, according to some reports, a figure that’s set to more than double within seven years.

“Every enterprise has to train employees, every function has its own unique training needs, and the organization as a whole has training needs around employee onboarding, compliance, and employee engagement,” Articulate president Lucy Suros said. “Many companies have historically done this training in a very unscalable, instructor-led way — someone standing in front of the room giving a presentation.”

Articulate enables businesses to take all that training online, to wherever the worker may be, which these days could be anywhere in an increasingly distributed workforce.

Schwartz pointed to several “macro trends” that is driving demand for its products, including the rise of remote work which has been “deeply accelerated by Covid.” And then there is what he called the “consumerization of the enterprise,” where employees have become conditioned to quality user experiences (UX) in apps they use in their own lives such as Netflix and Facebook. “They expect a certain UX from software, and they are bringing those expectations to the workplace,” Schwartz said.

Another trend Schwartz pointed to was the “democratization of training,” essentially means that companies are increasingly open to workers from all disciplines becoming teachers in the workplace. “Articulate makes it simple to turn content consumers (learners) into content makers (teachers) in the same way that YouTube does,” Schwartz explained.

So a conflation of factors, really, has led to Articulate’s first ever fundraise, with notable backers including growth equity firm General Atlantic, Blackstone Growth, and Iconiq Growth. While an extra $1.5 billion in the bank obviously gives Articulate a lot of financial muscle, Schwartz pointed to another key motivating factor in raising the funds now. “We wanted to bring great growth partners to the table to lend their best-in-class expertise and resources…. the round was less about capital and much more about partnership,” he said.

From whistleblower laws to unions: How Google’s AI ethics meltdown could shape policy

Fortnite Week 10 Challenge: How To Dance On The Apres Ski Dance Floor