At the end of the day, upgrading your headquarters is the only way to level up in Cult Of The Lamb. Keeping your Followers healthy and devoted will allow you to draw on their faith at the Temple, unlocking more powerful weapons and curses. You also need to maintain a large population to open the gates to different realms of the Old Faith, where more resources and bosses can be found.

There's a wide array of buildings that can be placed in your village. If you're not sure which ones to unlock with your hard-earned Devotion, try one of these! 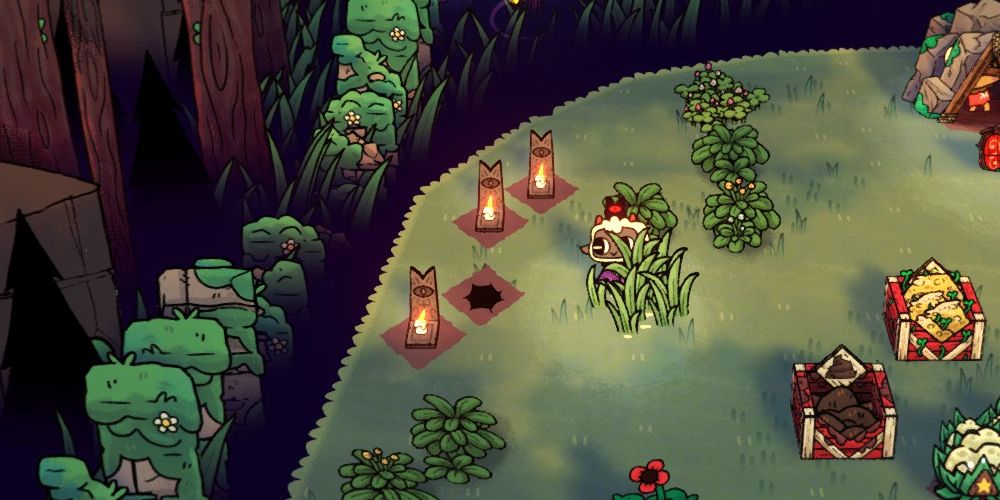 Sooner or later, your Followers will die of old age. Even if you Sacrifice or Ascend most of them before that happens, cooldowns and ritual costs mean that you won't be able to catch all of them before at least one dies of natural causes.

While a simple Body Pit or a trip to the Cooking Pot is all that's strictly necessary when a Follower departs the mortal plane, constructing proper Graves can help keep your surviving cultists in line. Unlocked by the tier-four Afterlife Doctrine Grieve The Fallen, Graves allow Followers to generate a small amount of Faith by visiting the final resting place of their companions.

For best results, spread Graves throughout the village, especially along well-used lanes of travel. That way your Followers will be more likely to stop by a Grave on their way to carry out daily tasks. 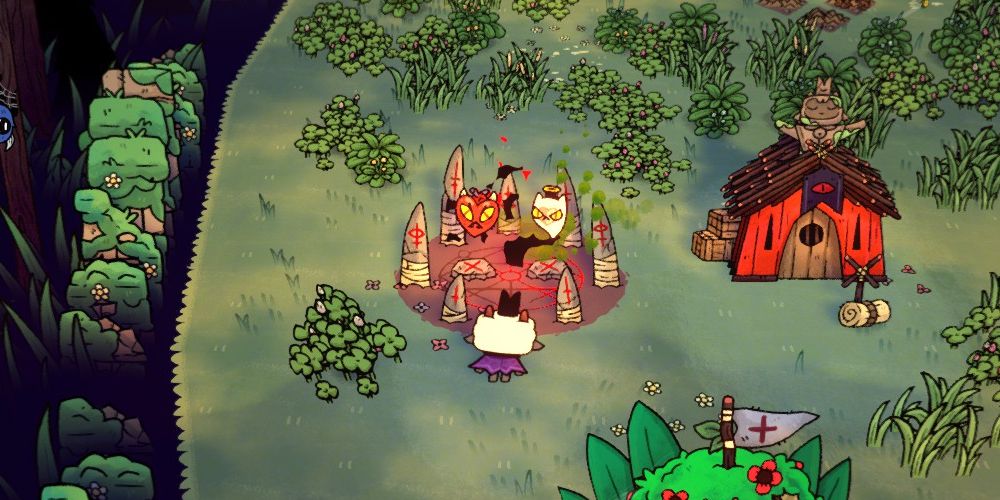 The Lamb's crusades into the lands of the Old Faith can be dangerous, especially in the latter half of the game. Powerful enemies, frequent traps, and tough bosses make for challenging dungeons, so you might want a little help in your battles.

A Demon Summoning Circle allows you to call forth a servant of the One That Waits, causing it to possess one of your Followers. The possessed cultist, while not as powerful as the Lamb, will come with you on your next crusade and provide support. Usually this takes the form of seeking out and collecting items on your behalf.

Upgrading the Circle to its highest level lets you possess up to three Followers at once to form a proper adventuring party! Just remember that the possessed Followers cannot work, pray, or take part in services until they are released at the end of your next crusade, and that they will probably suffer from Exhaustion afterward. 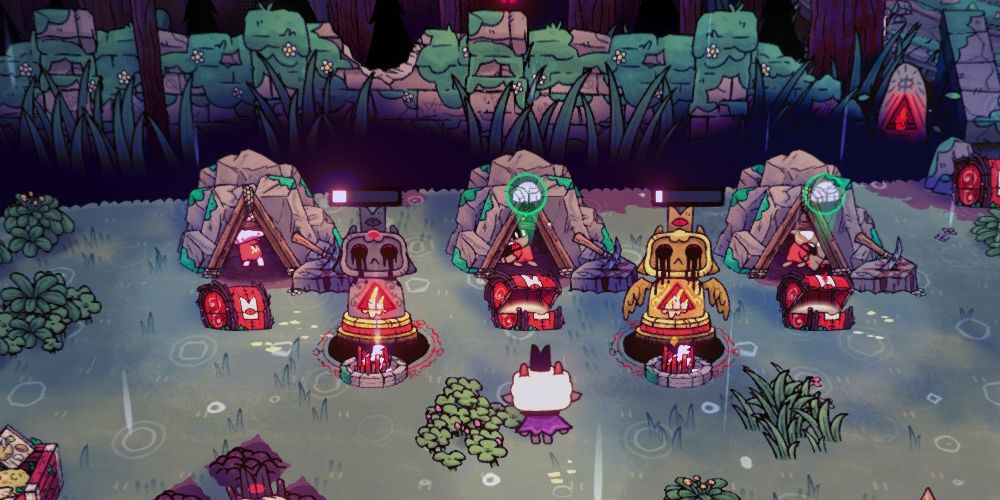 Early in the game it can be tough to get the necessary resources for basic buildings. Stone is especially hard to come by until you've unlocked Heket's realm of Anjura, so getting these production buildings up and running is a priority.

Lumber Mills, Stone Mines, and eventually Refineries form the backbone of your village's economy. Having two or even three of each in operation at once ensures that you'll never be without the bare necessities, and multiple Refineries let you convert extras into more advanced materials. 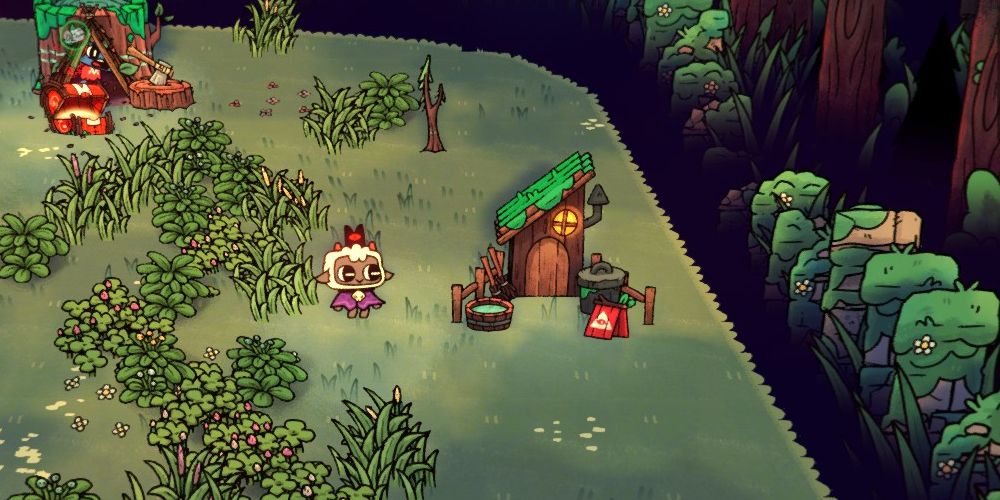 The most tedious part of Cult Of The Lamb's gameplay is cleaning up after your Followers. Until you've constructed Outhouses, they'll just do their business wherever they feel, and if it isn't cleaned up disease will quickly spread throughout the flock.

Just because the cultists are a bunch of animals doesn't mean they have to live like it. Building a Janitor's Station lets you assign one or more lucky Followers the divinely-ordained task of cleaning up their fellows' refuse. This frees up the Lamb to do much more important things like extorting tithes and imprisoning dissenters. 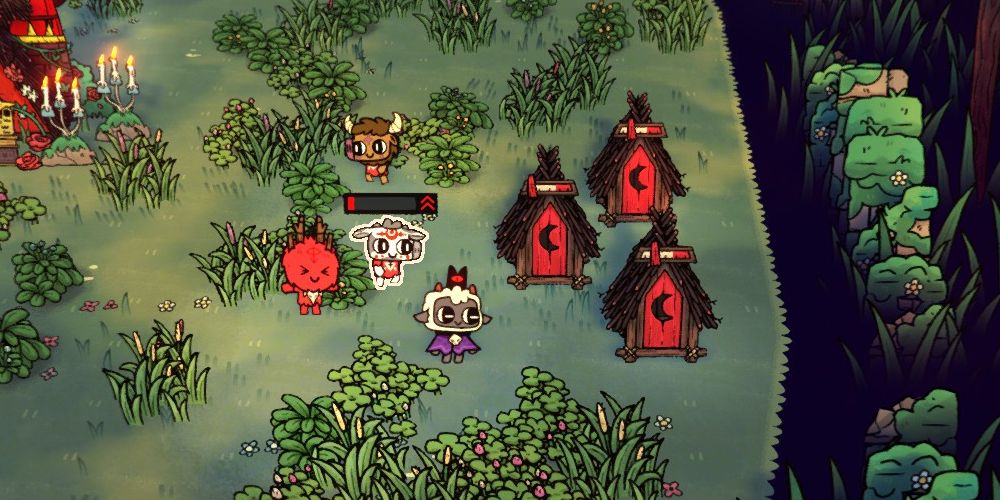 As useful as the Janitor Station is, the best way to keep your village's hygiene up to snuff is to build Outhouses. One for every five Followers is a good ratio, though you might want to build an extra if you're planning a long Crusade.

Outhouses need to be emptied every so often, providing you with Fertilizer that you can use for your crops. An overflowing Outhouse will contribute to disease spread, and can't be cleaned by a janitor – you'll have to do it yourself. If you find yourself coming back from crusade to nasty surprises at your Outhouses, try upgrading them with Crystals from Anchordeep to increase their capacity. 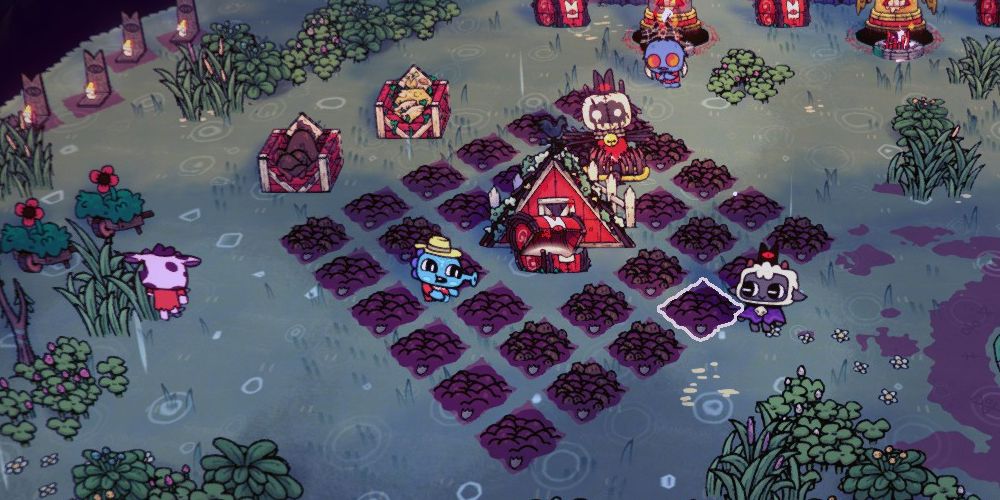 This trio of buildings lets you fully automate food production in your village, saving yourself huge amounts of time by letting your Followers sow, tend, and harvest crops. Seeds placed in the Seed Silo will automatically be sown by Followers assigned to farming, who will also water any plots within two squares of the Farmer Station. If a Fertilizer Silo is present and filled, they'll use it to boost the yield of your crops as well.

Once the Farmer Station is upgraded, your farmers will also harvest the plants for you, depositing the veggies and seeds in the station's chest. Since it's a fairly labor-intensive process, it's worth having at least two Followers assigned to the task in case one dies or falls ill. 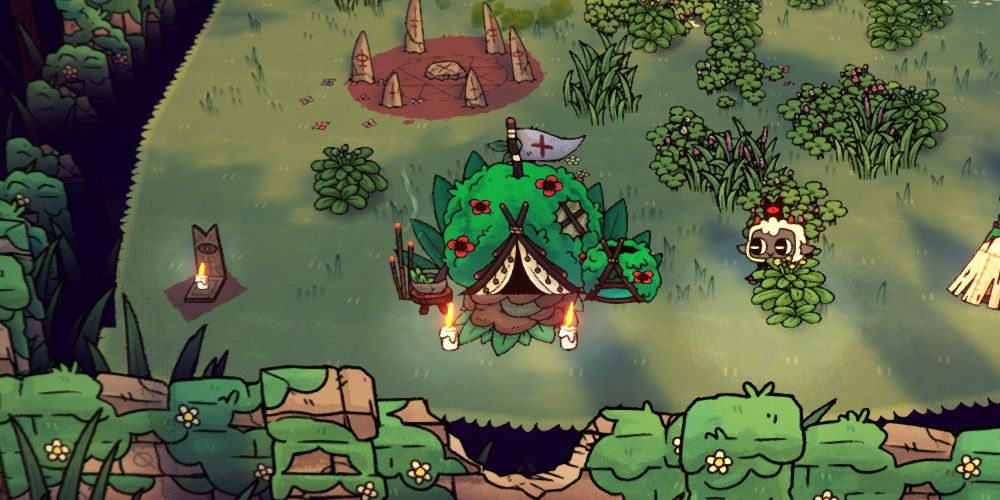 Even if your village is able to maintain perfect hygiene at all times, you'll occasionally have to deal with Followers getting sick. Ordering them to bed rest is a slow cure that keeps the affected Follower from working or praying, and if several cultists are sick your economy can grind to a halt.

The Healing Bay lets you use Camellia Flowers to instantly heal a sick Follower. Be sure to have a decent supply on hand, either by collecting them in Darkwood or growing them yourself on a Farm Plot. 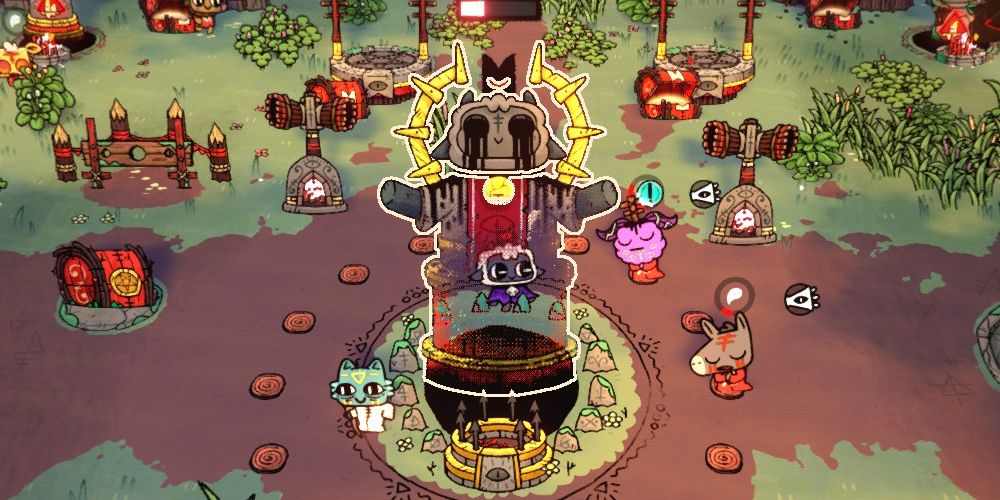 Setting up speakers throughout the village lets your Followers hear pre-recorded sermons at all times, even while you're away. This encourages them to work and pray harder, boosting the output of any cultists within range of a speaker.

Propaganda Speakers need to be fueled with Gold Bars, but a single bar will last several days, so it's not a huge drain on resources. Place them around your Shrine to quickly generate Devotion, and you'll be able to quickly unlock every building thanks to the tireless efforts of your Followers!

Respawn Entertainment Is Aware Of DDOS Attacks On Titanfall Multiplayer

How to Rank for Local SEO: A Complete Guide

5 Game of Thrones Characters and Their Real-Life Partners

Pokemon Sword And Shield: Shiny Clefable Appearing Now In Raids, But Only Until Tomorrow