Disney has shut down Club Penguin Rewritten and the website has currently been seized by the Police Intellectual Crime Property Unit.

Hearing the name Club Penguin will either make you feel incredibly old or flood you with nostalgia, as the mid-2000s online service was one of the biggest at the time, alongside sites like Habbo Hotel. Unlike Habbo, Club Penguin was shut down back in 2017, leading a group of fans to recreate it with Club Penguin Rewritten in the same year.

Although Disney took down a similar Club Penguin remake, Club Penguin Online, it left Rewritten alone for some time. That is until today when the website was seized by the Police Intellectual Crime Property Unit, and the official Discord page was completely scrubbed of references to Club Penguin and left with just the closure announcement. 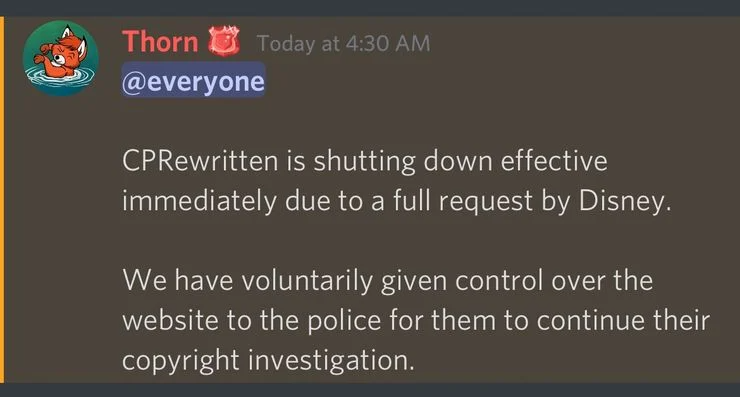 The Club Penguin Rewritten Discord now reads, "CPRewritten is shutting down effective immediately due to a full request by Disney. We have voluntarily given control over the website to the police for them to continue their copyright investigation". Some have attempted to reach out to veteran developers on Club Penguin Rewritten, but due to the legality of the situation, they aren't allowed to comment on it at the moment.

Disney hasn't made any kind of comment regarding Club Penguin Rewritten being taken down, but the site had recently started running advertisements. Because of this, the site was likely making some money off of Disney's IP, which would have given them a bigger copyright claim than for something like Toontown Rewritten, which runs without any ads and is simply there to preserve the original game.

Since the website was taken over by the PICPU, it's now been renamed "City" alongside the Discord page simply being titled "Rewritten". Considering Disney does still own the Club Penguin copyright, it's extremely unlikely that Rewritten will be able to come back from the claim in any form, especially if it started making revenue off of the advertisements.

Loki Gets A Second Disney+ Trailer, Proves That We Can Totally Trust Him

Final Fantasy 14: How Eorzea provided a lifeline during the coronavirus pandemic

Animal Crossing: How To Make A Subway Station