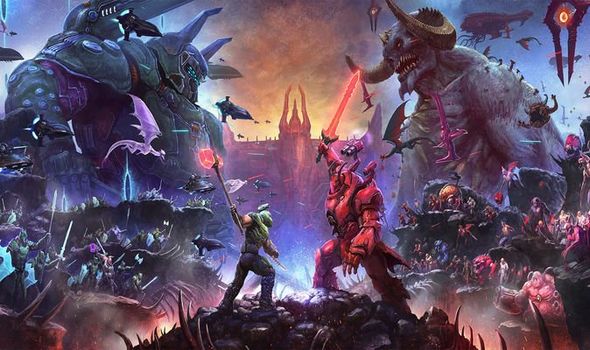 Doom Eternal Part 2 DLC 2 is releasing this week across PS4, Xbox One and PC, complete with the full DoomSlayer finale.

The second campaign expansion for Doom Eternal is set to include all the hallmarks that made the base game so compelling, and fans won’t be waiting long to find out what happens next.

A message from Bethesda explains: “Unite the Sentinel armies and take the war to the stronghold of the Dark Lord himself in one last effort to seal away evil once and for all.

“With the all-new Sentinel Hammer in hand, the Slayer will rip, tear and now smash every demon in his path across ancient Sentinel settlements, devastated Earth cities and beyond, tackling stronger new enemy variants as he nears his final battle.

“Everything you’ve fought for has led to this moment. Your war against Hell ends here.”

WHAT IS THE DOOM ETERNAL PART 2 RELEASE DATE?

Bethesda has announced that the Doom Eternal Part 2 DLC release date has been scheduled for Thursday, March 18.

We don’t know exactly when the new update will be available to download and play but gamers will need to keep an eye on their chosen digital store from Midnight onward.

More news on the timing could be shared in the coming hours, although Bethesda hasn’t left much left time before the countdown.

And like with any big launch, there is a chance that some platforms will receive the new update before others.

The good news is that everyone should have access to the Ancient Gods finale before the end of day on March 18.

And for those wondering how to purchase the new content, Bethesda revealed today: “The Ancient Gods – Part Two launches March 18 and comes as part of the DOOM Eternal Year One Pass, available now as a digital purchase or included with the Deluxe Edition of DOOM Eternal.

“The Year One Pass also includes The Ancient Gods – Part One, offering Pass holders the complete two-part finale to the Slayer’s saga in one package.”

The new Doom Eternal DLC is set to add new locations, story content and enemy variants, with the Armored Baron and Screecher Zombies expected to cause even more chaos on the battlefield.

And here’s a few things being promised as part of the new Doom Eternal expansion:

Face Hell’s armies in never-before-seen locations. From the ruins of ancient Sentinel settlements and the cosmic wonders of the World Spear, through a devastated and overgrown city on Earth hiding a mysterious gateway, to the last bastion of the Dark Lord protected by towering walls and powered by advanced technology.

Prepare to fight deadly new variations of demons, including the powerful new Armored Baron, the stalwart Stone Imp, the venomous Cursed Prowler, and the new Screecher zombie who empowers nearby demons when killed.