Making Youtube content or streaming from a console is essentially impossible without a capture card. The broadcast features for streaming and recording on the PS4 are great for getting your feet wet, but streaming this way limits the personalization and customization of your stream. The Twitch app on Xbox provides a similar streaming experience, but again, you won’t be able to use overlays, scenes, notifications, or any of the tools that make a stream unique. If you would like to stream Switch or any other gaming console, you’re simply out of luck.

OBS is the gold standard studio software for streaming because of all the tools it has for making your stream your own. The rudimentary streaming options built into the Playstation 4 and Xbox One are nice for newcomers, but if you’re serious about making content, there’s no substitute for streaming from a PC using a capture card.

Elgato dominates the market when it comes to capture cards, and for good reason. The entire product line of Elgato captures cards are simple, easy to use devices that produce the highest quality image possible from a console. Whether Xbox, Playstation, Nintendo Switch, or even the SNES Classic, Elgato capture cards make it brain dead easy to get your streams up and running and your videos captured in exceptionally high quality.

The HD60 S+ is the newly upgraded model of the HD60 S and the capture device best suited for the vast majority of content creators. It offers 1080p60 capture, HDR10 (or high dynamic range), and true 4k60 passthrough, making it the best capture device for current and next-gen consoles.

In OBS/Streamlabs, all you need to do is add a video source the same way you would add a webcam, select the Elgato game capture from the drop-down, and you’re ready to start streaming or recording. The integration with OBS is so seamless that it automatically will capture sound from your game as well.

I was initially in a little bit of disbelief not just at how simple it was, but how perfectly it worked. I started out using the HD60 S+ to stream the SNES Classic and from out-of-the-box to up-and-streaming took about 5 minutes. Next, I set up the capture card on my (docked) Switch to record some Super Smash Bros. Ultimate, a game where even a millisecond of latency can make the game unplayable. I experienced no noticeable latency whatsoever. The “True Passthrough” isn’t just a marketing term, it’s legit.

If you don’t have an Elgato capture card yet, the difference between the two versions is only about $20, so it shouldn’t be too hard to convince you of the value of the S+. If you’re already running the 60 S (or even the older HD 60) then you may want to consider replacing yours with the S+ for a couple of reasons: 4k60 passthrough and HDR10.

If you’ve got an Xbox One X or a PS4 Pro, you already know how incredible it is to game in 4k. Like 144hz refresh rate or flushable wet wipes; once you get a taste of the good life there’s no going back. When the next generation of consoles release late this year (barring the further escalation of the coronavirus) the gaming community at large will be exposed to the wonders of 4k gaming. 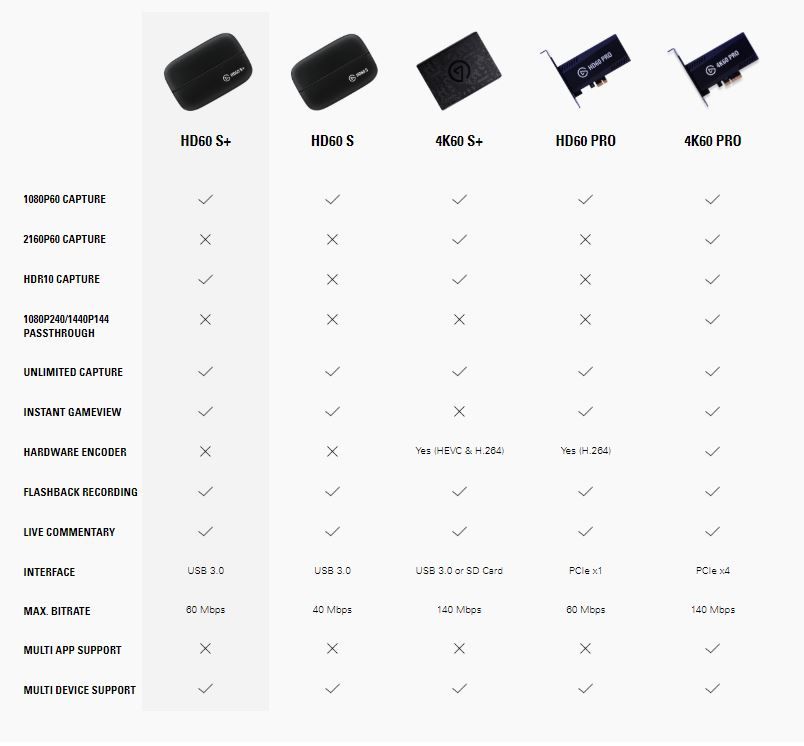 The HD 60 S+ is able to capture 1080p60 gameplay while providing 4k60 passthrough, meaning Xbox One X and PS4 Pro players can enjoy their games in full 4k while streaming or capturing in Full HD. The S+ is the capture device you’ll want to be using when the new consoles release so that you never have to sacrifice your resolution for your stream. It’s truly the best of both worlds.

The other feature that makes the S+ a worthy upgrade is the HDR10 passthrough and recording. Image quality isn’t just about resolution, after all. High Dynamic Range is a feature you’ll find on a lot of TVs, monitors, and cameras, and can be enabled on both the PS4 and Xbox One. HDR is all about the detail that can be seen in different lighting. With HDR enabled, players are able to see more detail in the darkest darks and lightest lights. It also enhances colors, making then more vivid and bright.

The HD 60 S+ is able to record the HDR10 format so long as it is enabled on the PS4 or Xbox One, and passthrough that setting to your display. Capturing the highest quality image while also enjoying it while you record is possible with the HD 60 S+ now and for the next generation of consoles.

A lot of the creative aspects of content creation take a lot of practice, trial and error, and time to perfect. Capturing high-quality game footage is a baseline requirement of any Twitch stream or Youtube channel, and Elgato’s capture cards make it incredibly simple to do so you can focus on the content itself. the HD 60 S+ provides the best quality in a very simple package. If you want to make console gaming content, there’s no other device that compares.

An Elgato HD 60 S+ was provided to TheGamer for this review. You can learn more about Elgato’s capture cards on their website.

Fortnite Season 3: Everything Added In The New Splash Down Update