Expeditions: Rome manages to craft a deep CRPG experience with the mundane in a genre where magic and fantasy reign supreme. It has four classes to choose from, each fitting one of the traditional party roles. The Princeps is your tank, the Veles is your rogue, Triarius is your healer, and Sagittarius is your archer.

The game allows you to make your character any one of these classes, and you get to choose a subclass, to boot! You’ll have access to the entire skill tree for the class of your choosing, but your first skill point is spent on your choice of subclass.

This list is based on the usefulness of the starting skills that these subclasses provide, not the utility of their skill trees themselves. 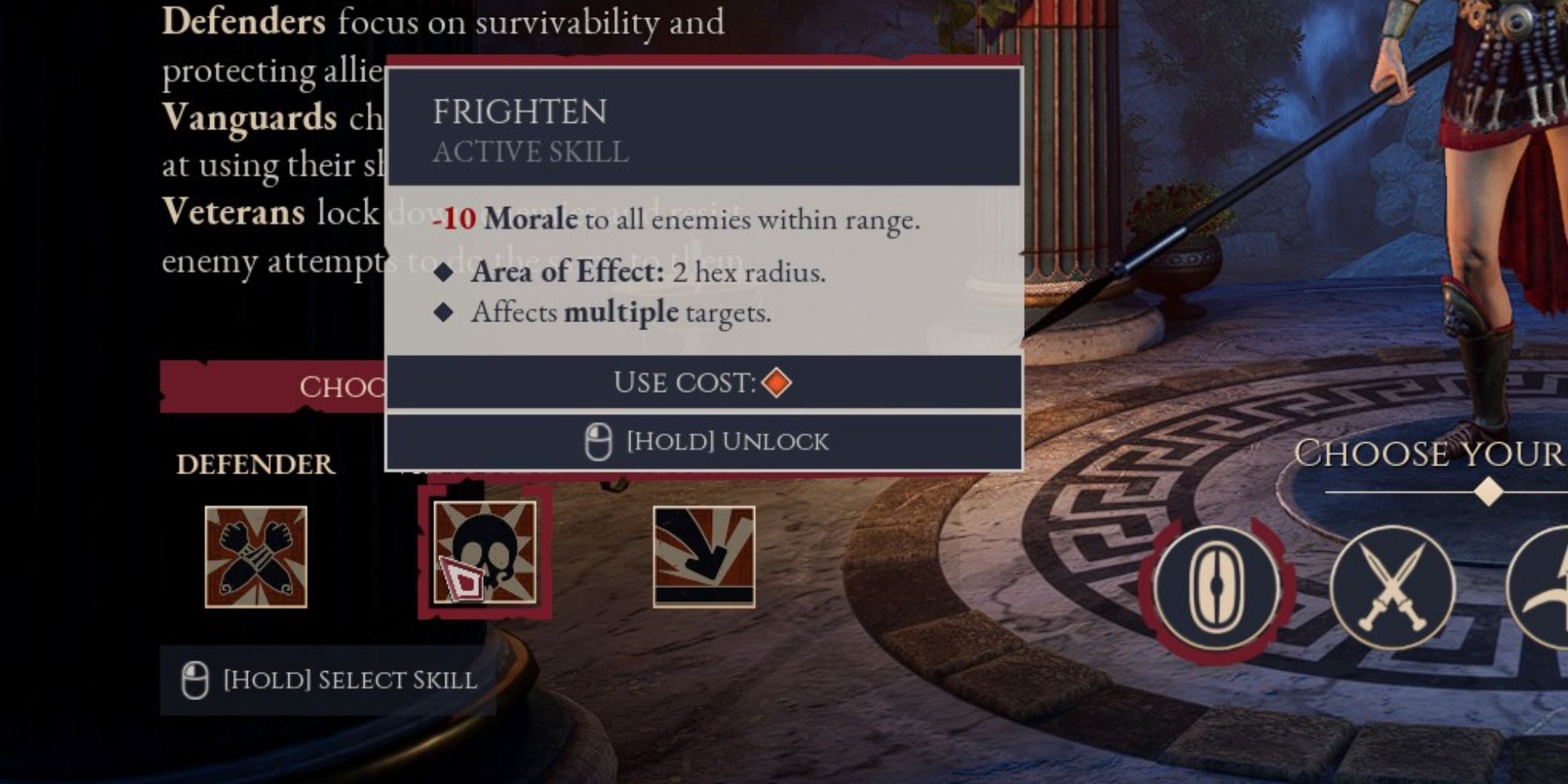 A Princeps is all about being on the frontline, providing defense and support in equal measure. They are the shield bearers and the tanks, soaking up enmity and damage so your squishier units can do what they need to.

Vanguard, however, doesn’t really exemplify this role as a starting class. It comes with the Frighten skill, which merely reduces enemy morale in a small area. This is more useful in the later parts of the game when you have more tools to deplete morale, but at the beginning of the game it’s more beneficial to deplete health instead. 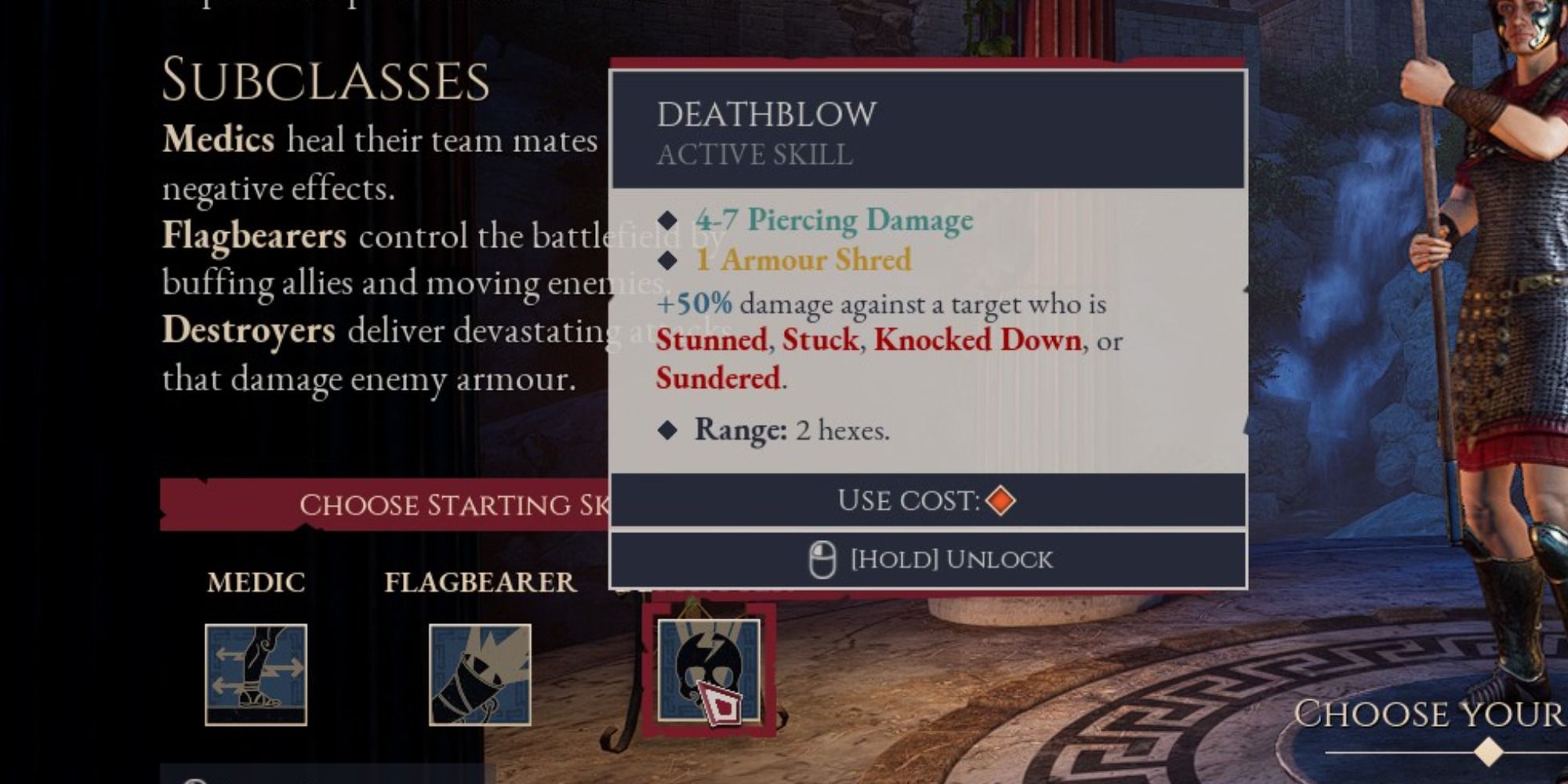 While the Triarius class is based around support, the Destroyer subclass has the most offensive tools to do so. Its starting skill is Deathblow, which deals more damage against foes who find themselves in tricky situations, such as being knocked down.

While this is a good skill, especially since it has a range of two hexes – something not every staff or pike will have by default – there are superior picks in the Triarius tree that even a unit focusing on Destroyer skills would want. 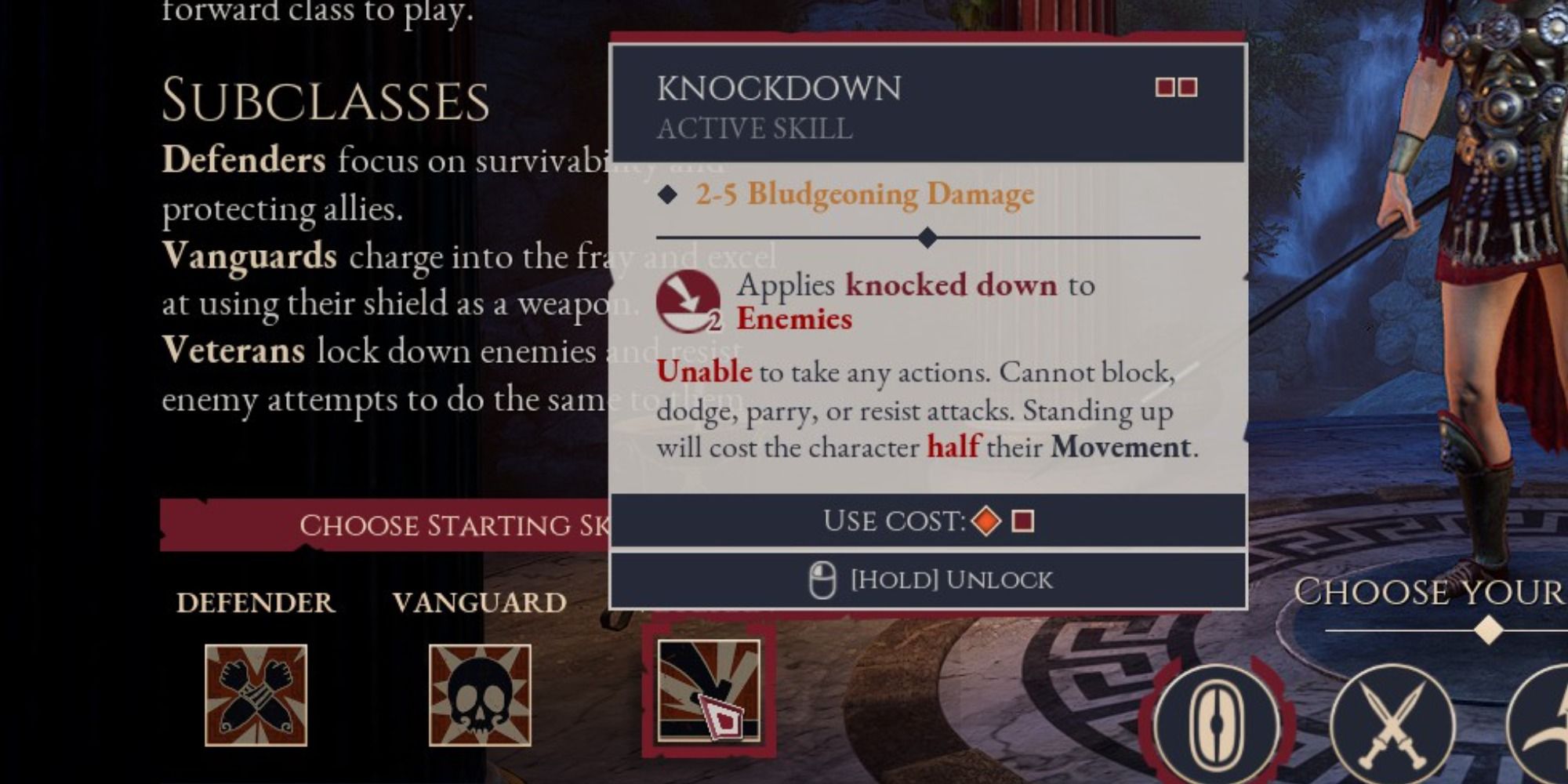 Veteran is the offensive branch of the Princeps skill tree. These units will deal damage with their skills while inflicting painful status effects to lock enemies down at the same time. The starting skill here is Knockdown, which does what it says.

This is an incredibly useful skill, held back by the fact that it may only be used twice per battle. You’ll quickly learn which foes you should be targeting with such a useful ability, but for the first few hours of the game, it isn’t the superior choice. 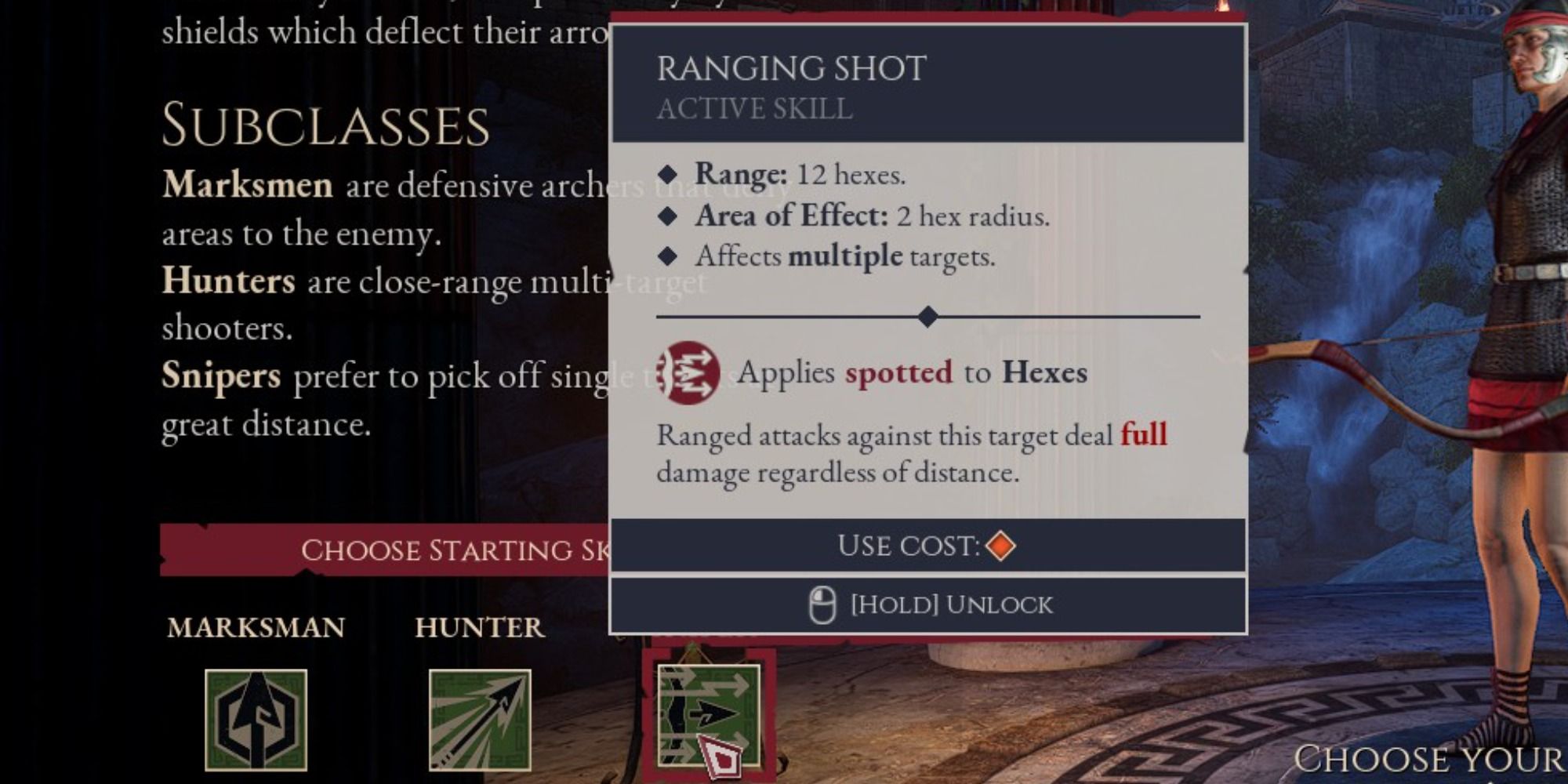 As you’d expect, the Sniper branch of Sagittarius expects you to be using only your bow and to be using it from afar. Its skills reward tactical positioning and forethought in your strategy.

Ranging Shot will make it so that enemies in a small area of your choice will take full damage from your arrows, regardless of how far they are. This is a great skill in theory, but the game doesn’t provide you with all that many opportunities to really make it work. In many cases, your action point is better spent moving to a better location. 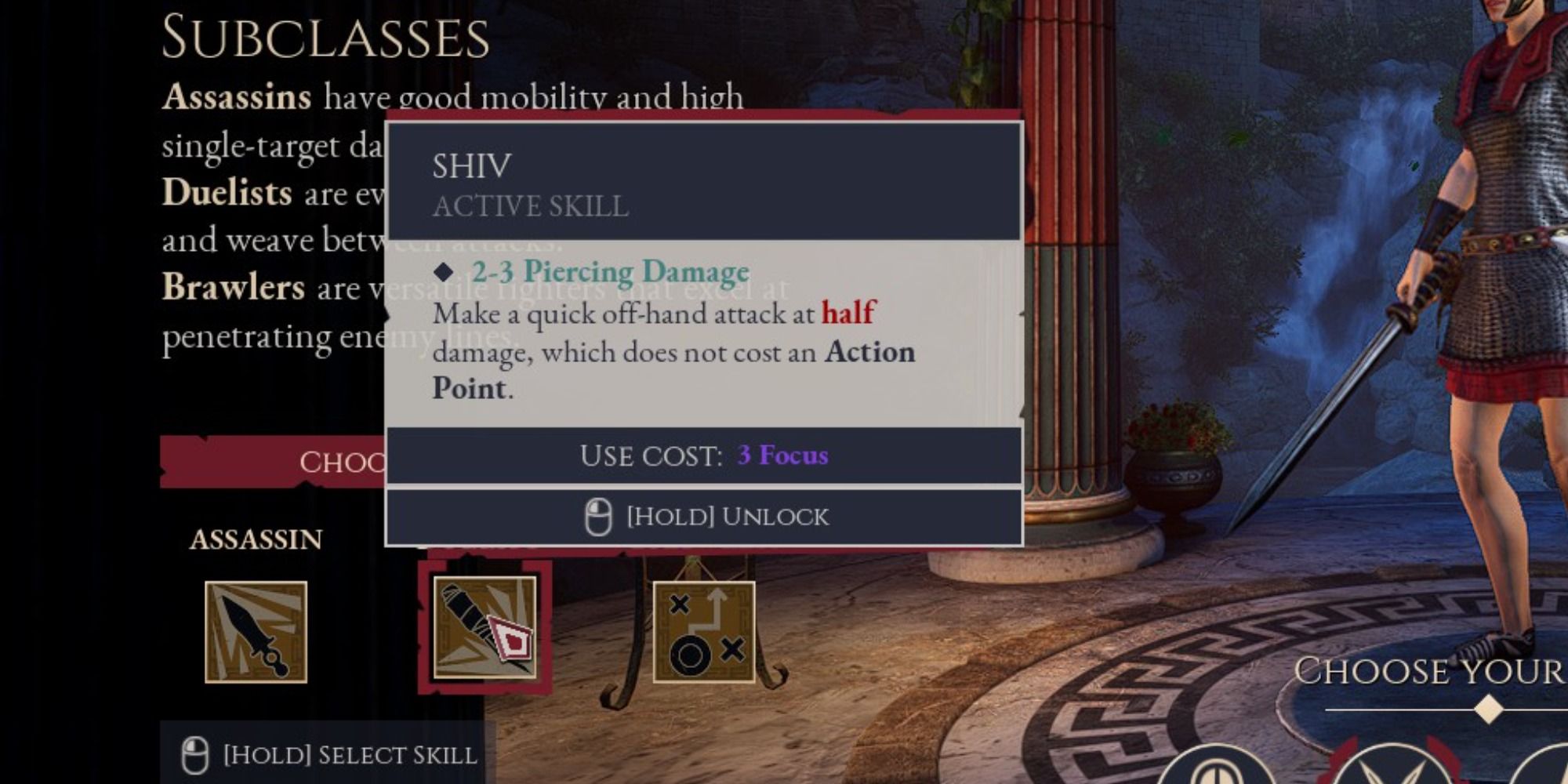 The first Veles subclass being halfway down this list should tell you that their starting skills are all pretty good. The Duelist is marked as an evasive and quick fighter, and the Shiv skill helps paint that picture.

It’s an attack that won’t cost you your action point, though it is somewhat pricey at three focus points. It’s not going to do much damage, but it’s fantastic in the early parts of the game where health pools are low and you can use it to secure a close kill. All Veles should be picking this one up. 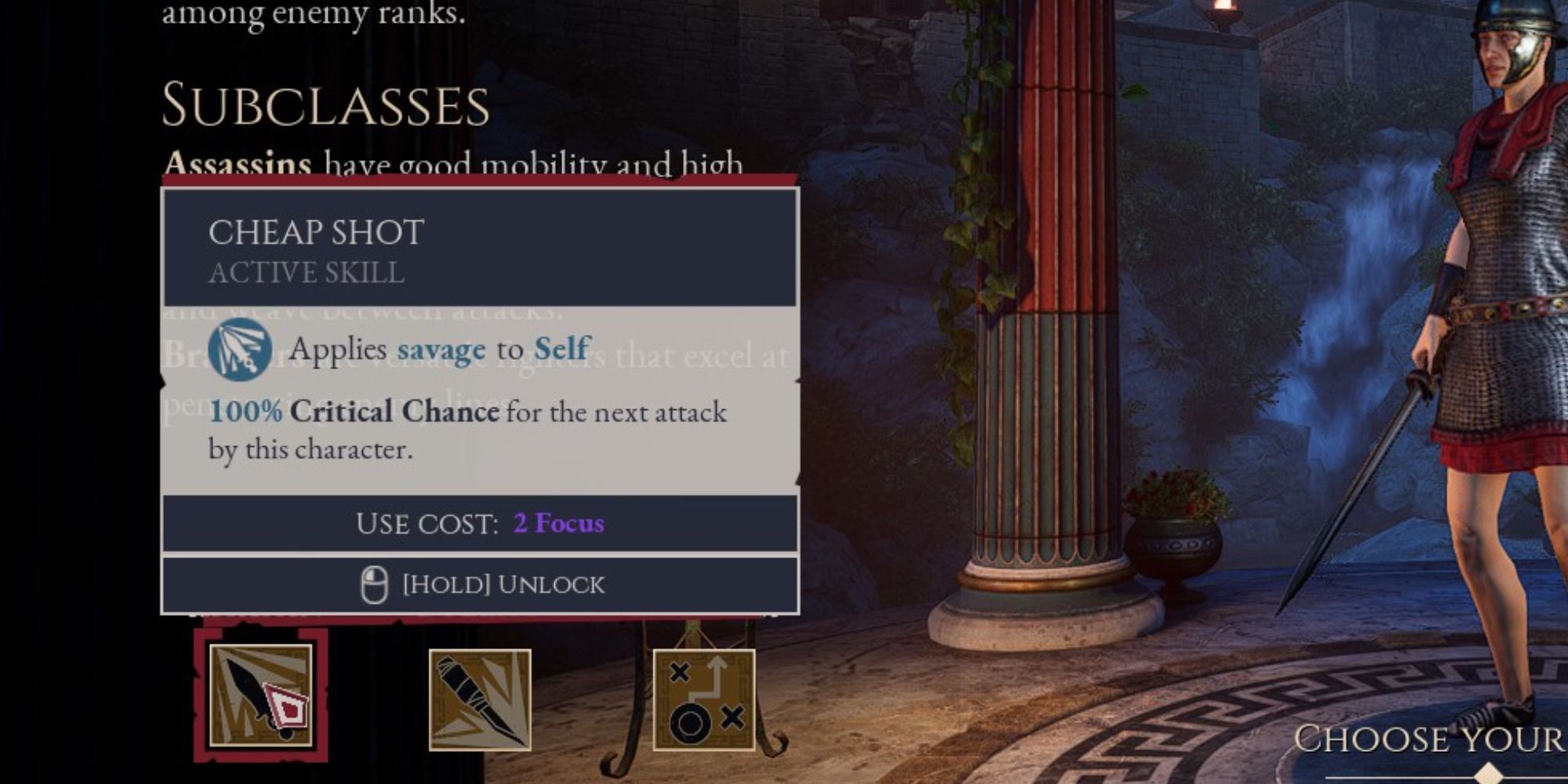 As far as subclasses go, the Assassin is possibly the most suited to their starting skill. Cheap Shot costs only two focus points and will guarantee a critical hit on your next attack, barring any weird exceptions such as skills that don’t allow for critical hits.

This skill is pretty much always useful. It’s great for whittling down an enemy leader’s huge health bar, securing the kill on a risky enemy, or just keeping the momentum going on an untrained combatant killing spree. 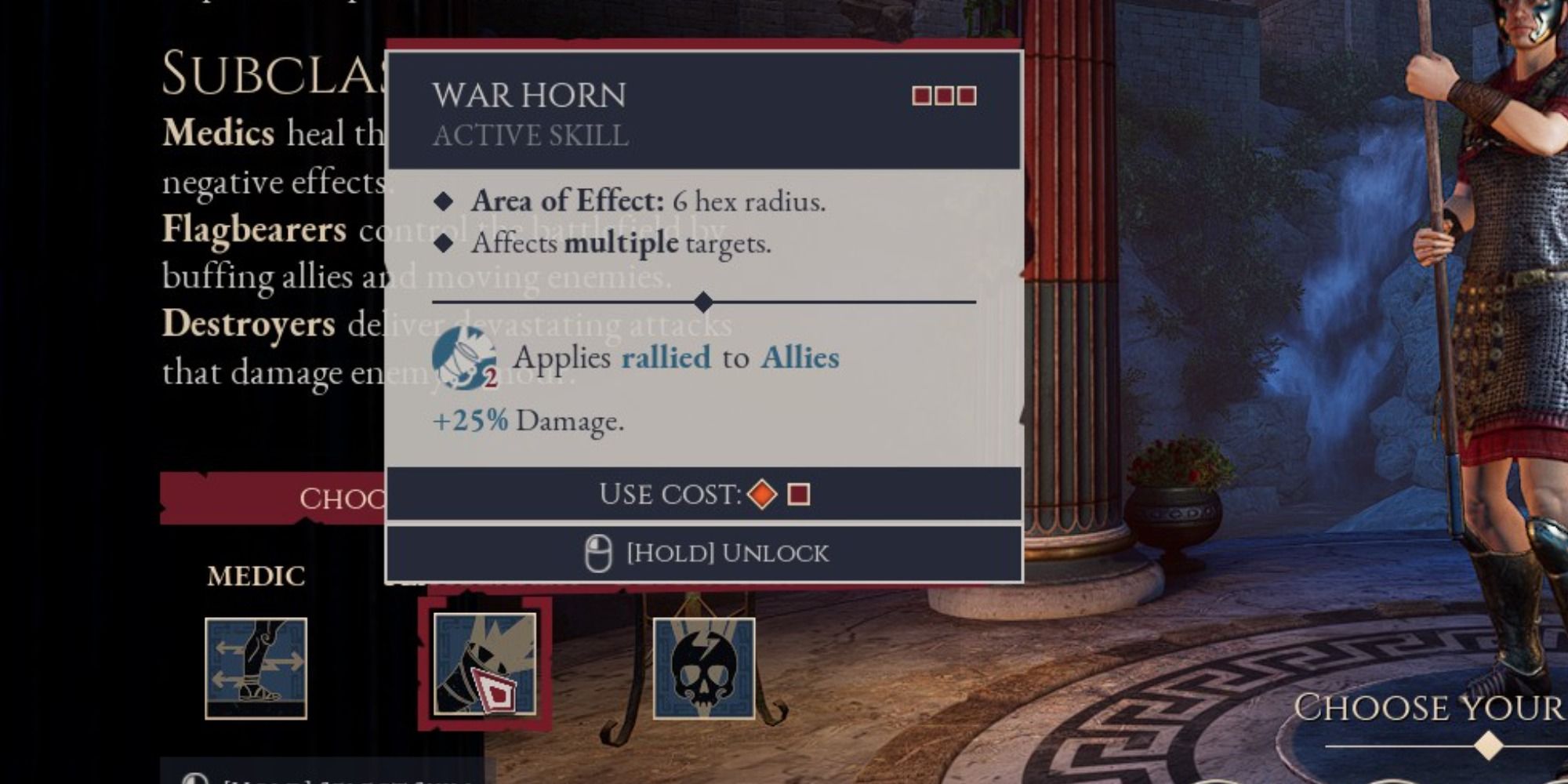 Flagbearers are pure tactical support and their first skill, War Horn, is a great boon to any team. A 25 percent increase in damage is pretty big in a game like Expeditions: Rome and the skill’s range is huge.

It can even be used three times over the course of a fight, so there’s no reason you shouldn’t have this buff active at all times. 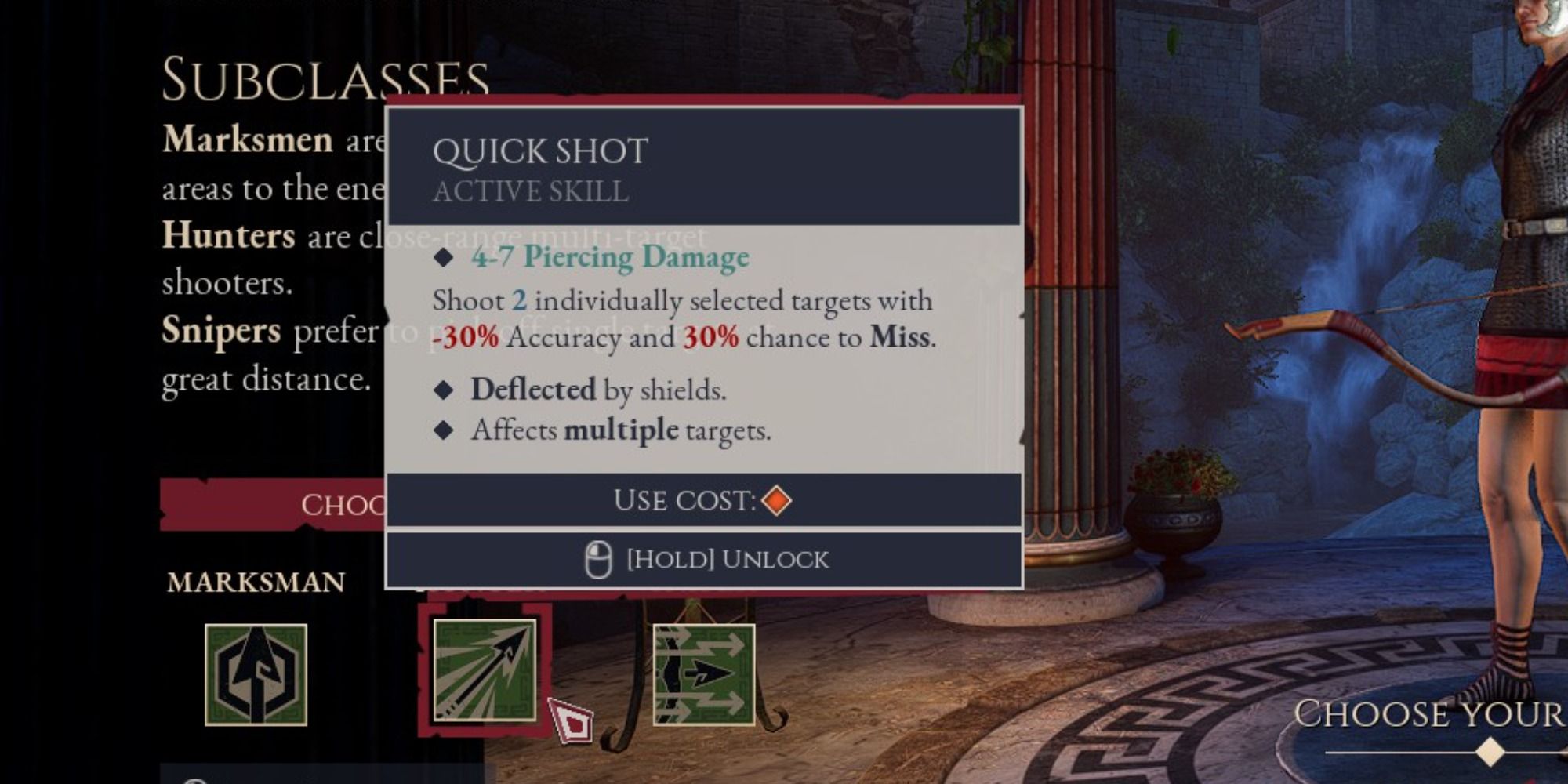 Hunters are notable for being the Sagittarius subclass that bothers to include melee weapons in its skill roster. For that reason, it’s something of an odd duck, but it can still be used well in the right hands.

That said, Quick Shot is another ranged skill. It allows you to attack a few combatants in one action, something rather rare for much of the game. That said, the penalty to accuracy and the chance to miss make it a risky take. 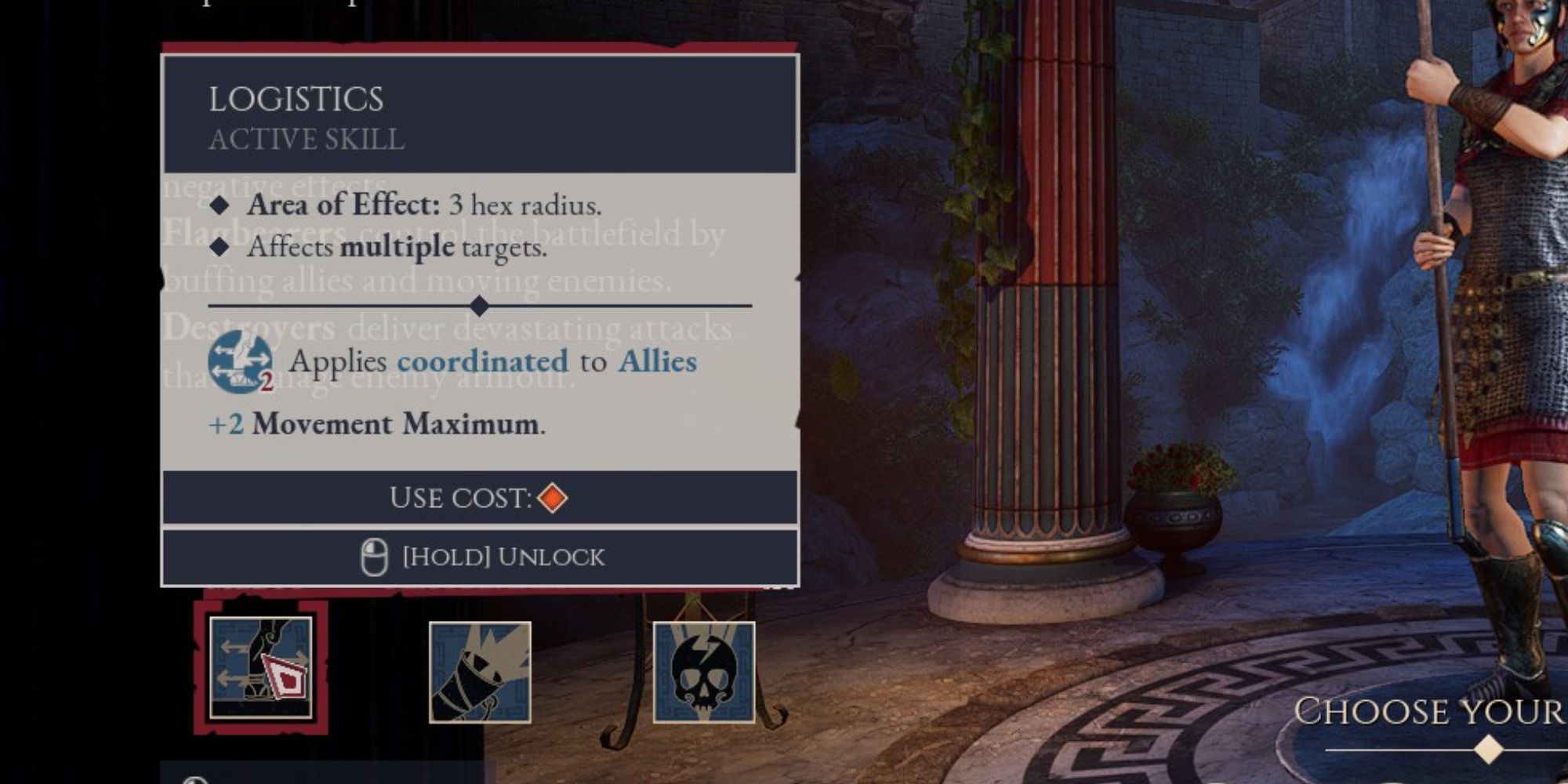 Making your main character a Medic is an odd choice, considering you start the game with Syneros, but you cannot deny that Logistics is a great skill. Being able to increase movement for your entire party – if they’re all standing close to you – is fantastic.

There are so many missions and fights in the game that reward having such mobility, so it’s certainly one of the best choices you can make. And hey, if you don’t like Syneros for whatever reason, it’s always handy to have a Medic around. 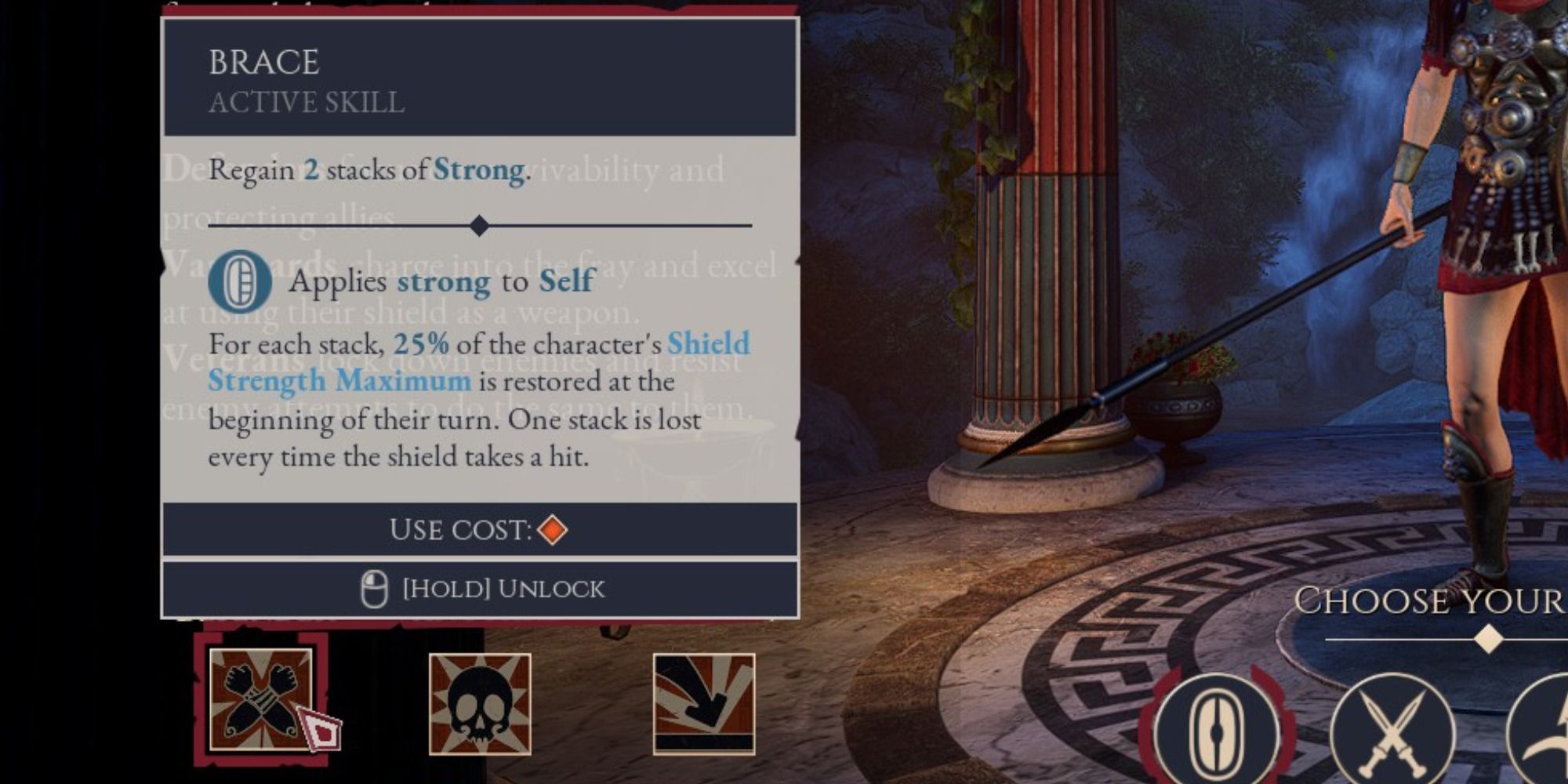 The Strong status is an odd one in Expeditions: Rome. Shield bearing characters start battles with four stacks of it, and it’s tied to your shield strength, a stat that serves as additional armor, protecting your HP.

You replenish your shield strength every turn, scaling with how many stacks you have. You lose a stack of Strong every time you’re hit. The Defender’s starting skill, Brace, adds two stacks of Strong. If you want to emphasize the “defend” of Defender, you need Brace. 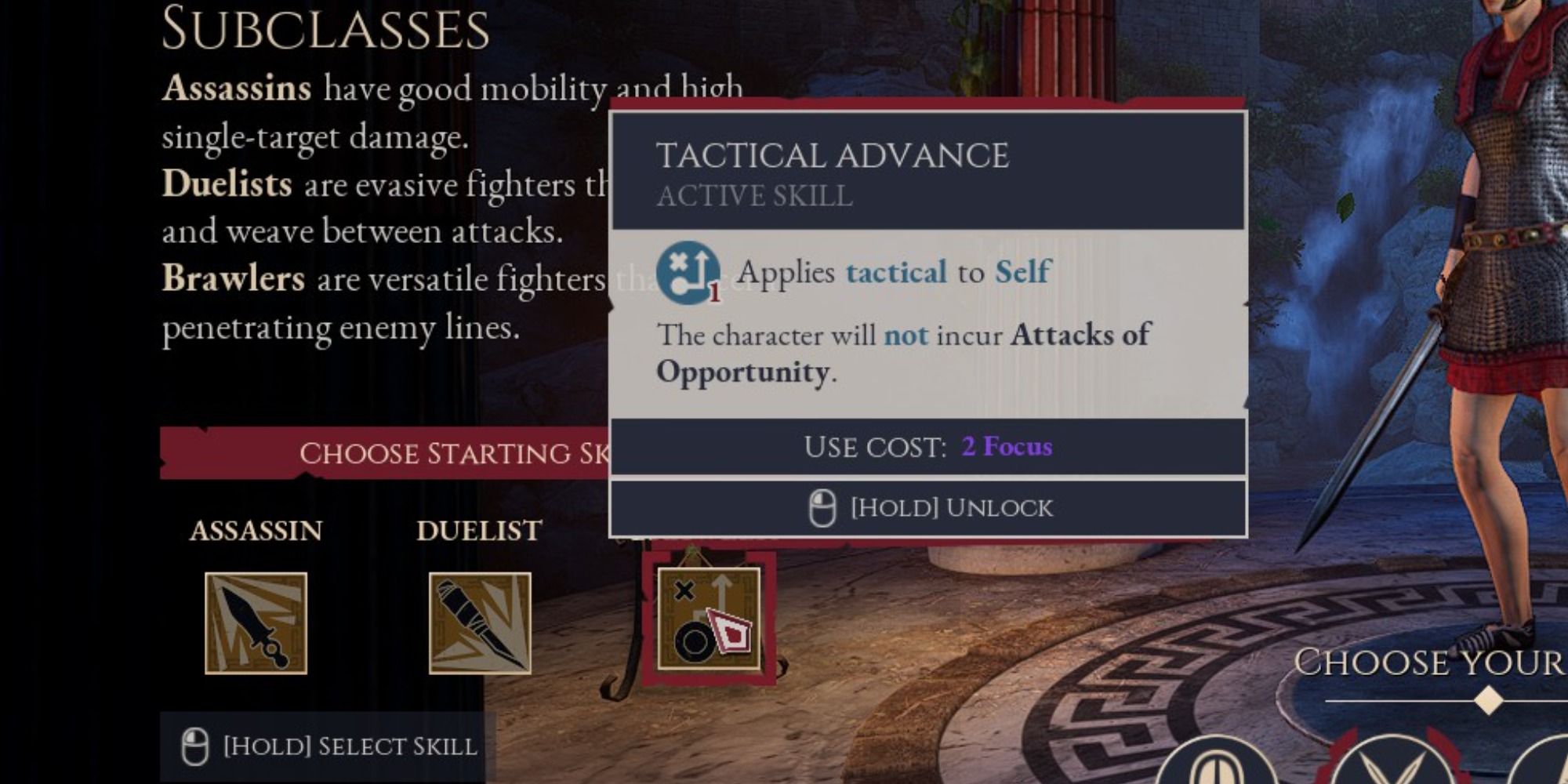 Brawler provides a skill that you’ll wish every character in the game could access. Tactical Advantage will let a unit, for the measly price of two focus points, move around the battlefield without provoking attacks of opportunity.

This means you can pass by a Princeps with ease, get into a flanking position without fear, or even flee from a clash that would otherwise kill you. It’s a serious boon to any Veles, and you should have this skill on all of them. 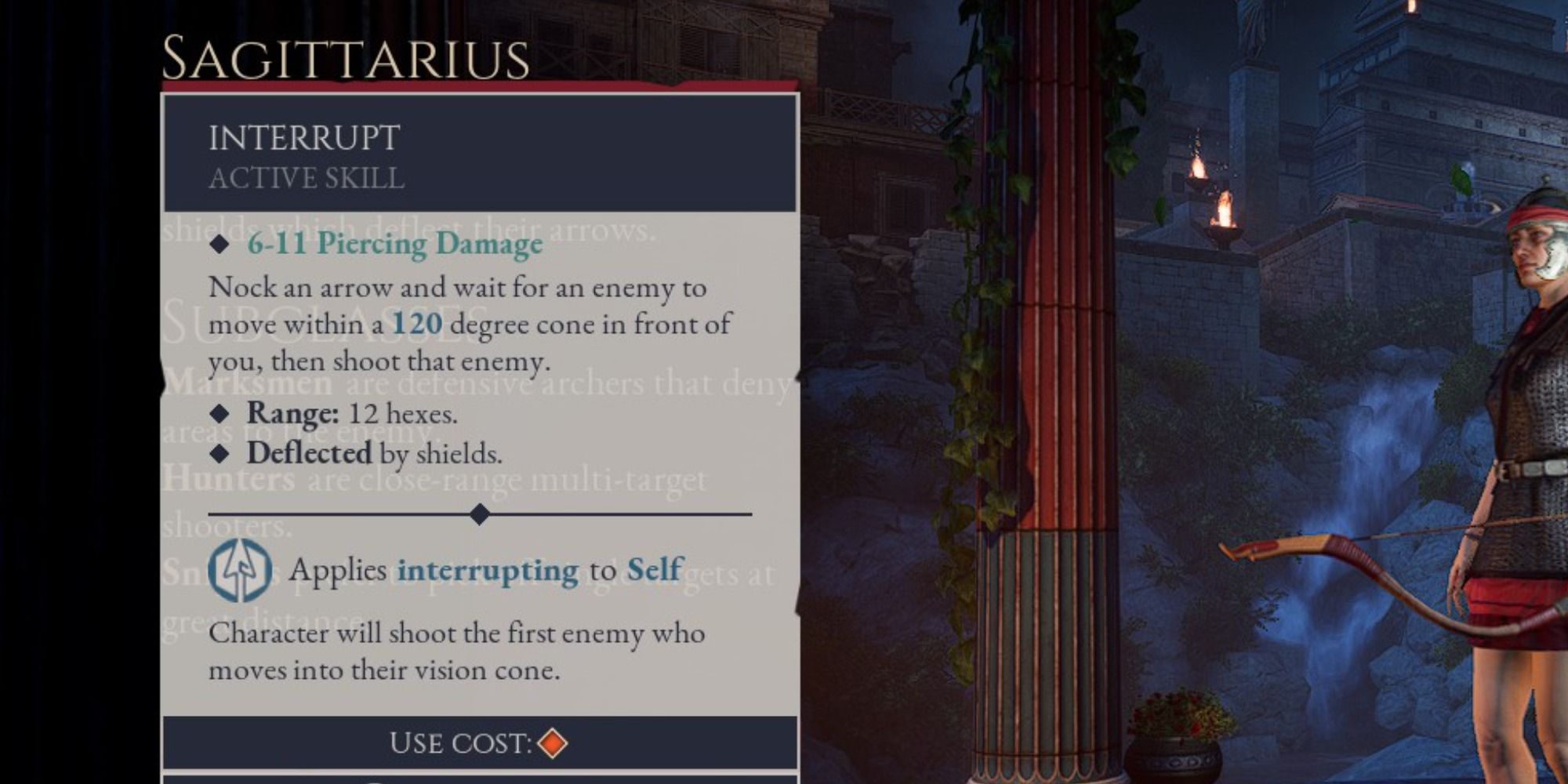 Overwatch is somewhat overpowered, no matter what game you encounter it in. Interrupt is Overwatch for a Sagittarius and it’s something you’ll want on every archer you field.

Not only is this skill great for sniping enemies around a corner on their turn, but you can even dictate the scope and direction of your target area precisely, letting you plan out exactly which enemies you want your Marksman shooting.

PlayStation Players Use Certain Orange And Black Adult Site The Most

Die Hard’s Nakatomi Plaza is coming to the Call of Duty: Warzone map