IndyCar driver Santino Ferrucci defended his final lap crash with Oliver Askew moments before the end of the virtual Indy 175, blaming it on “NASCAR style” driving from previous races.

The final round of the IndyCar iRacing Challenge series took place at the Indianapolis Motor Speedway and accumulated in a thrilling multi-driver battle in the closing laps.

Askew led a McLaren one-two on the final lap of the race with his teammate Pato O’Ward in second place and ex-F1 driver Marcus Ericsson and Ferrucci completing the top four.

Ericsson snatched the lead with an audacious move into Turn 3, but O’Ward attempted to re-pass the Swede at the final corner and ended up colliding with Ericsson, taking them both out of contention.

This left Askew and Ferrucci in a drag race to the line for the race win, but Ferrucci appeared to veer left on the run to the finish line and both drivers were sprung into the air handing Team Penske’s Scott McLaughlin the race win.

Ferrucci eventually accepted blame for the incident, but cited his experience racing in virtual NASCAR events as one contributing factor to his aggressive manoeuvre.

“I watched everybody get slowed up there coming out of the last corner,” Ferrucci said.

“I was catching Askew, and I’ve been running a lot of different series lately, and I was trying to get on his door because of the NASCAR style.

“I got a little too close, and I think I turned just a touch too aggressive, and that’s my fault. That’s definitely my mistake there.

“I did not mean to come across the line through the air to a virtual finish, but also at the end of the day, we’re racing on a video game, and I am second, he is first, and I was doing everything I could to put our car in first place in Victory Lane.”

Contrary to his post-race comments, during his live-streaming of his race perspective on Twitch, Ferrucci offered a different perspective.

“I thought I was a little closer to the line,” he said. “That was close, that was so worth it. Last lap, last straight, come on, it is for TV, it’s for the fans.

“That was so intentional. I should have just tried and just tapped him a little bit. I didn’t expect that.”

Ferrucci, who earned a four-race ban when racing in Formula 2 in 2018, doesn’t believe the virtual crash will cause any long-lasting real-life rivalries.

“I think at the end of the day, it’s a video game,” he added. “It’s virtual reality. It’s not anything that I think I’d find myself doing in a real car.

“If you look at all the weaving down the straight, I feel like I’m almost playing Call of Duty with everybody weaving in and out places.

“I don’t think that there could be some rivalries born between a few people that have had issues, but those that have been pre-existing in iRacing might have made it worse.

“At the end of the day a couple or three weeks before we get going again, people will make amends and we’ll be going racing again and not have to worry about it.” 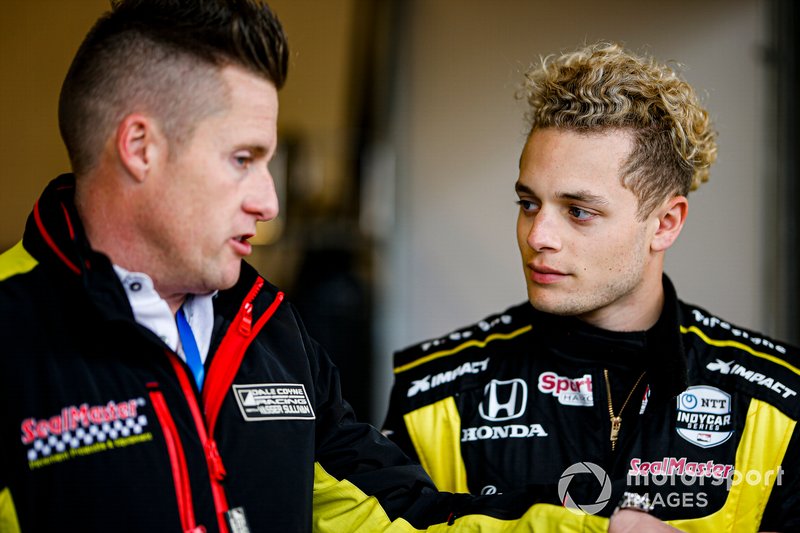