At long last, you’re about to enter the final chapter of Lonesome Village. You’ve saved the bulk of the villagers from their entrapment in the tower, you’ve finished their quests to become their friends, and now, it’s time to take on the biggest bad of all: your own father.

Chapter Five picks up right where Chapter Four left off, but you’re in the homestretch now. Only one more daunting mega-puzzle and some puzzle-based combat are all that stand between you and beating the game, so follow along with our guide to breeze through the final chapter and finish saving this charming village for good. 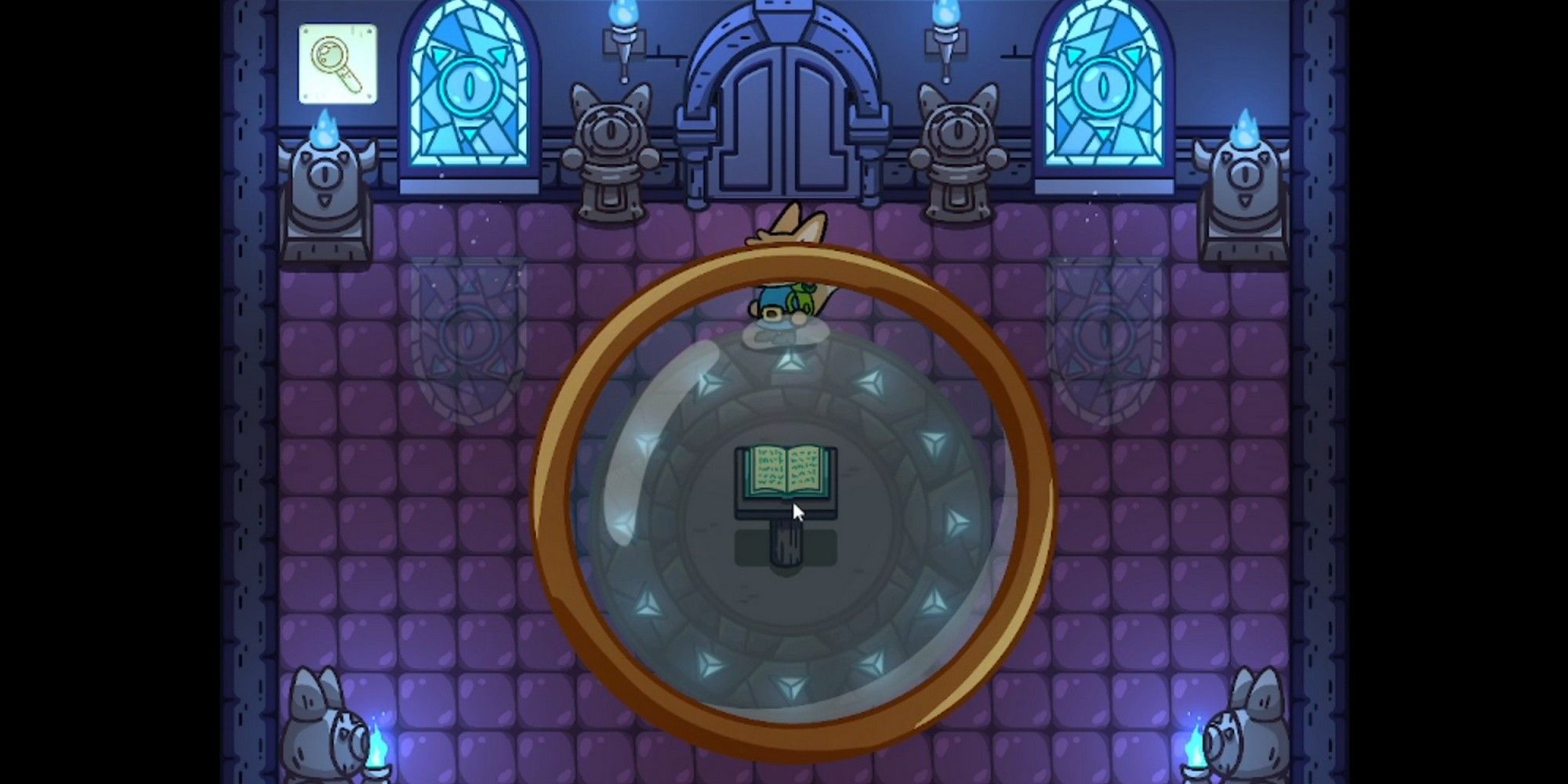 When the chapter begins, Earl and Ezra are telling Wes about the golden magnifying glass he’s just received, said to have the power to seal away all evil from the world. Sounds like it’s time to head back into the Tower and see what it can do about the evil in there, too.

Use the elevator to head back to the top floor and use the magnifying glass on the circle in the center of the floor. This brings you into the final puzzle of the game, which consists of eight smaller puzzles.

Your overall goal for this room is one you’ve completed before – you need to get the mirrors positioned so that they shine lasers into the cat's eyes on the wall. The only difference from the last time you did this is that the lasers are more obstructed than before.

For sake of keeping things straight for you, we’ve segmented our guide into the left half of the dungeon and the right half.

The Right Half Of The Final Floor 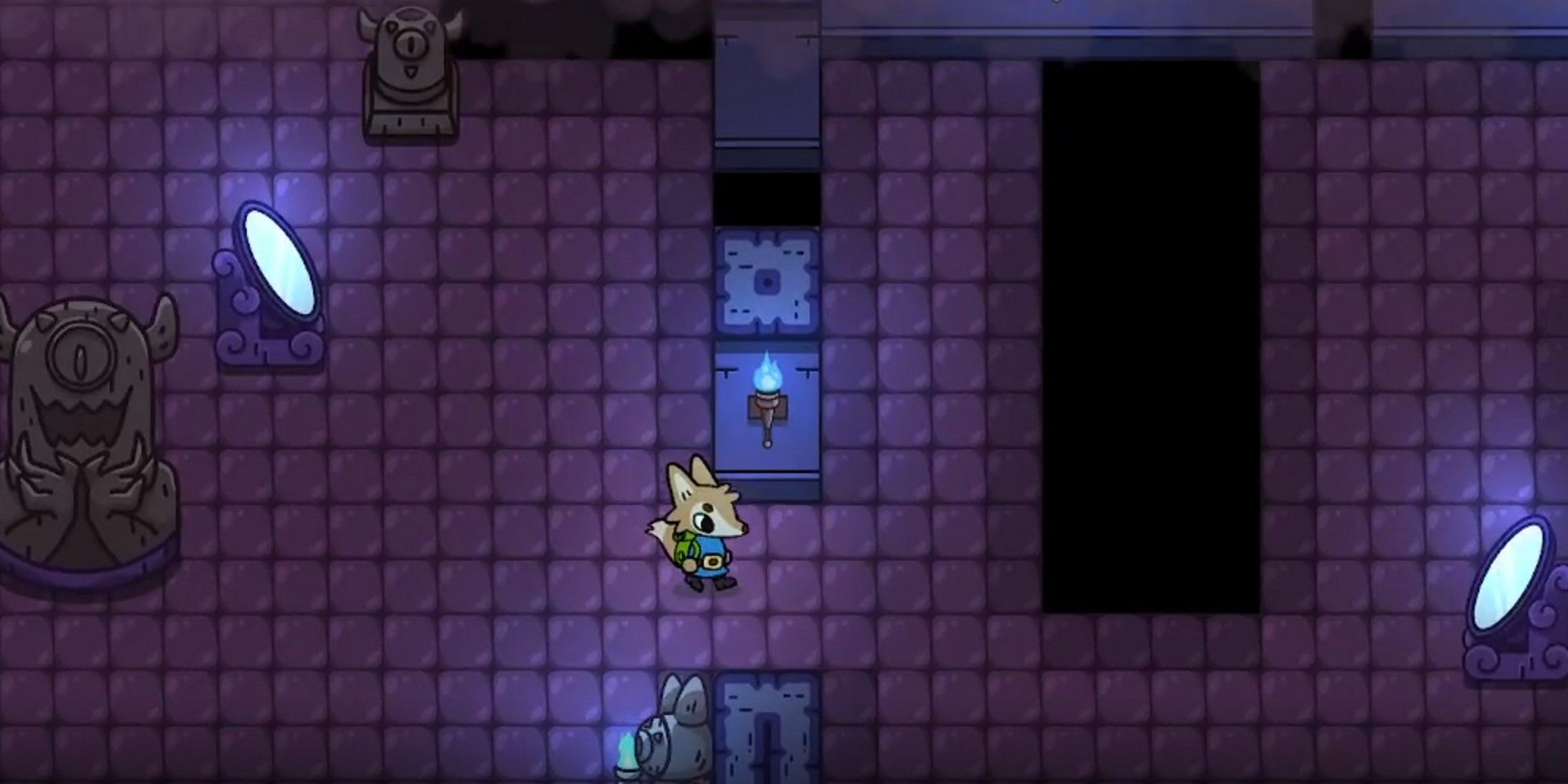 There's no right or wrong way to tackle this puzzle, as you'll have to do both sides eventually, so choose one to start on and then get to work.

This puzzle is very much like the one you finished to free Candy from Floor 8 in Chapter One, in that you have to readjust the direction of the arrows in this board to get the lasers to the unicorn horns.

What’s different, however, is that there are now two lasers instead of just one – a red and a blue one. Naturally, the blue laser needs to hit the blue unicorn horn, while you’ll need to get the red beam to the red horn. As with before, the laser needs to pass through each arrow before hitting the horn or the path won’t be considered valid.

Below is a photo solution for this puzzle. 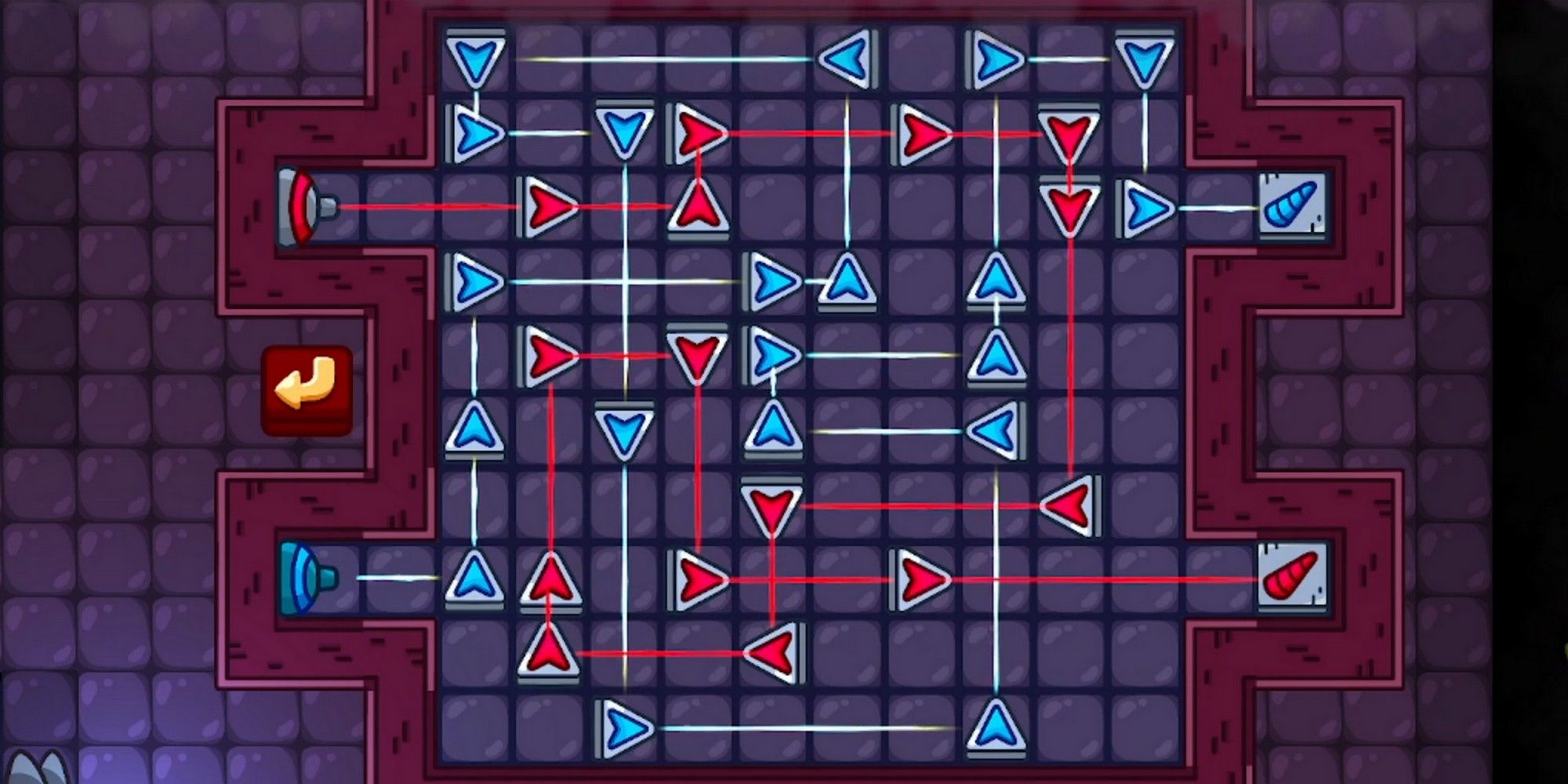 Remember all the way back when you freed Earl on the first level of the Tower? It feels like it happened so long ago, but just remember the trick – using the magnifying glass to find the hidden answer to the order of the torches on the floor. 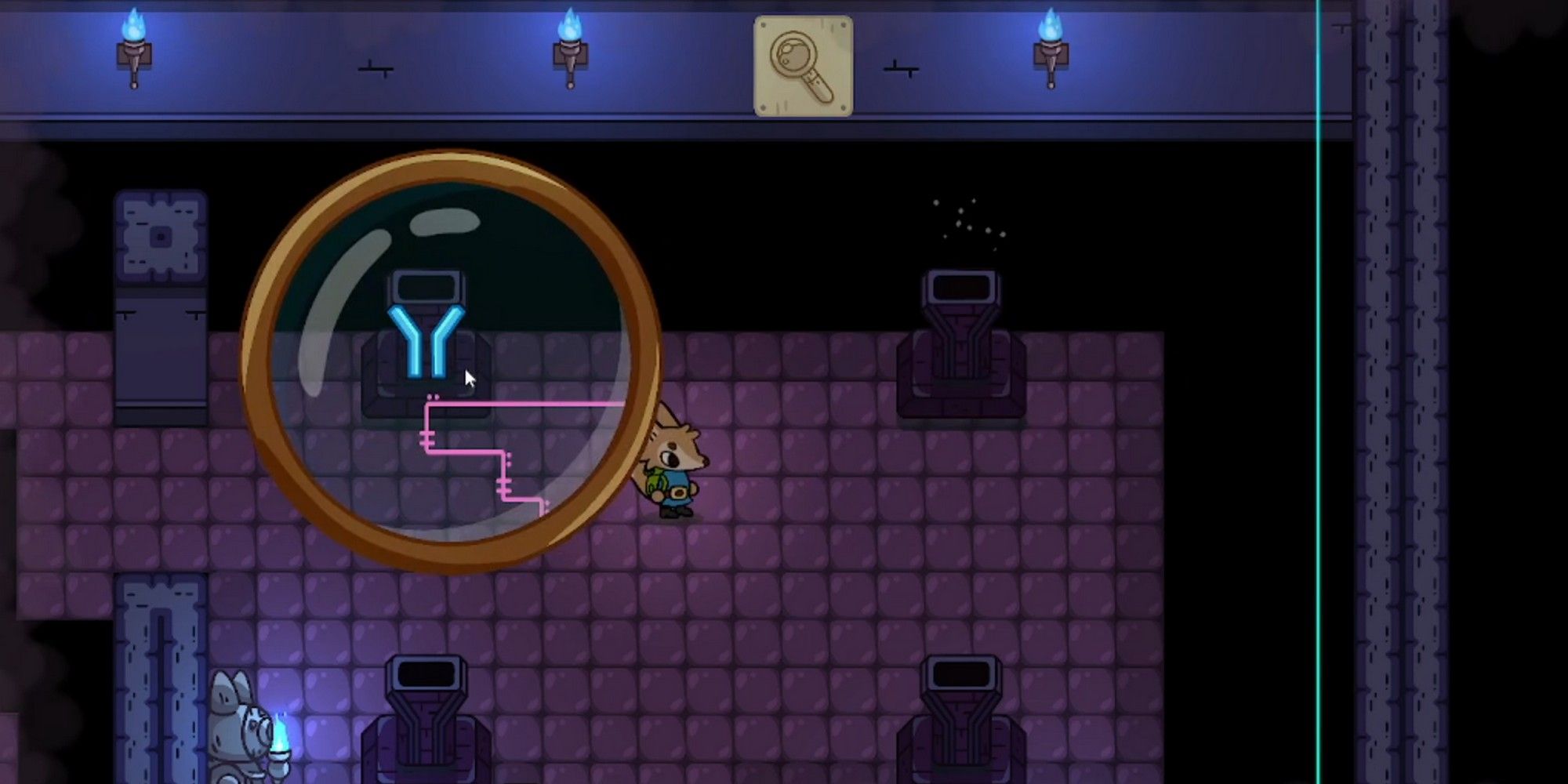 The pattern is different every time you attempt the puzzle. Use your lens to find the pink path and then light it up in that order to move on.

This is a puzzle you’ve not seen yet, but though it looks a bit daunting up front, it’s fairly straightforward. The goal is to use your magnifying glass to see the symbols on the colored plates and use the order of those symbols to get to the solid platform at the top with the mirror.

Though, how this puzzle works may confuse you at the start. When you step off of a green panel, Wes is teleported to the red panel containing the same symbol. Using this information, check out the hidden symbols to find your pattern to the end.

Entering the puzzle from the top-right from the torch room, move Wes in the following order to access the mirror: 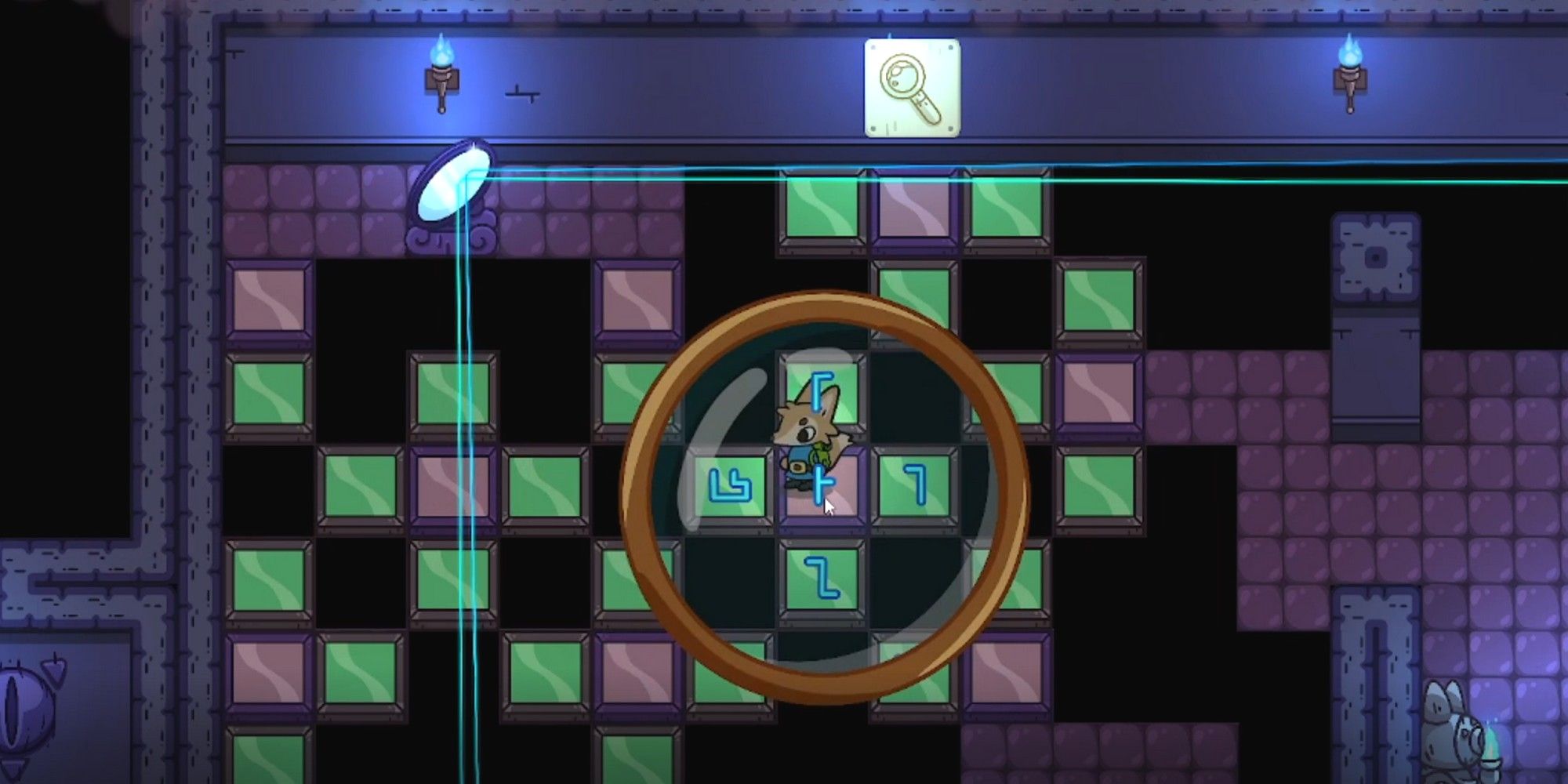 When you’ve reached the mirror, push the mirror to the right so that the laser is bounced through the small opening in the wall and into the next room, then step off the ledge to head back to solid ground. Once this is all set, go into the room below and push the mirror in here so that it reflects to hit the laser in the center room.

Go back to the main area to maneuver that mirror so the light shines into the right eye.

The Left Half Of The Final Floor 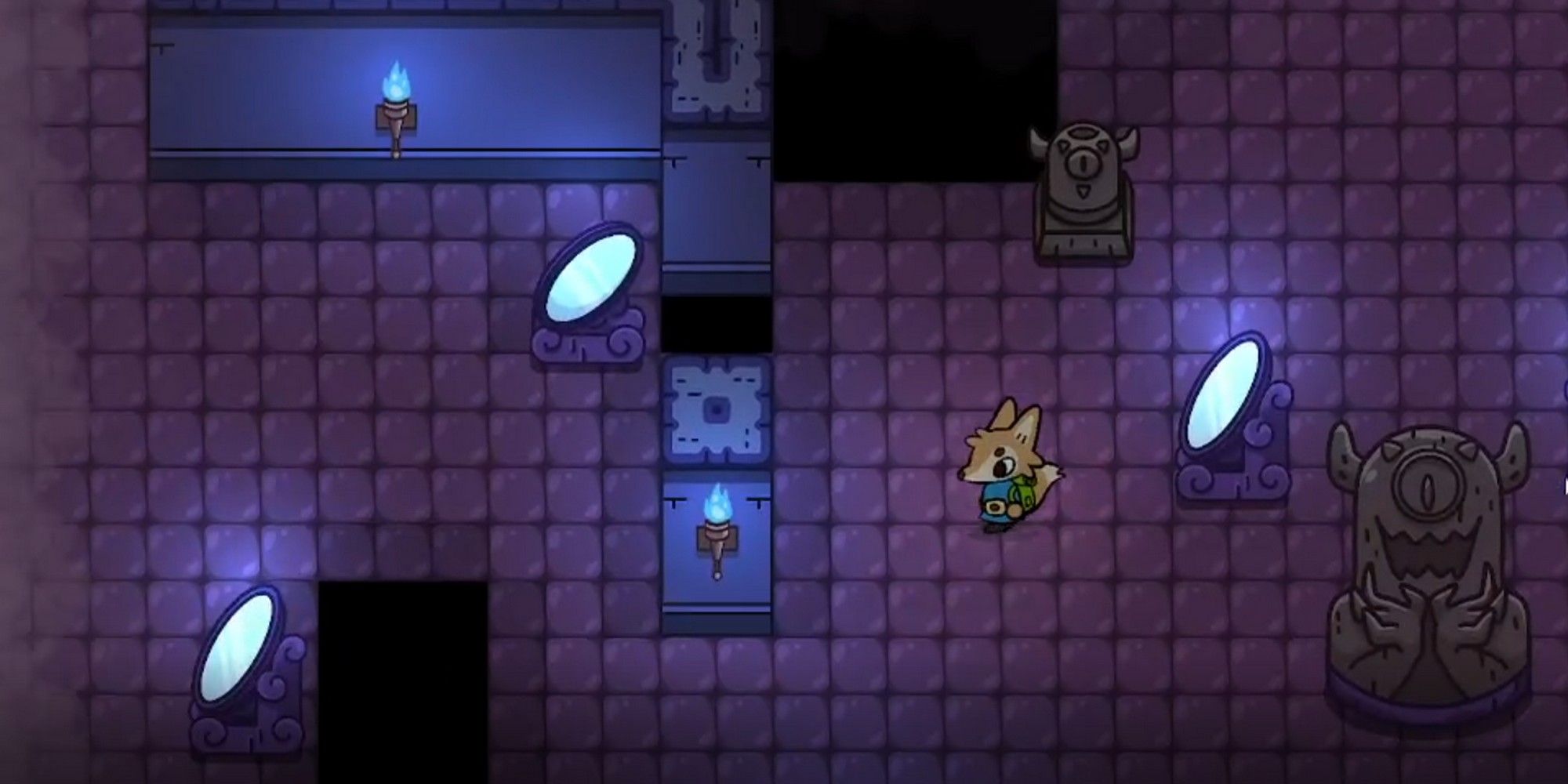 Now that you're halfway done, time to finish things for good.

While the solution to this puzzle may not be immediately intuitive, the sign on the wall tells you what you’ll need to do: use your magnifying glass on the symbols on the floor, paying careful attention to the color of each symbol.

Not all the symbols you see on the floor will be options when inputting your solution into the pedestal, so this should be of some help.

The solution for this puzzle is below if you get stuck. 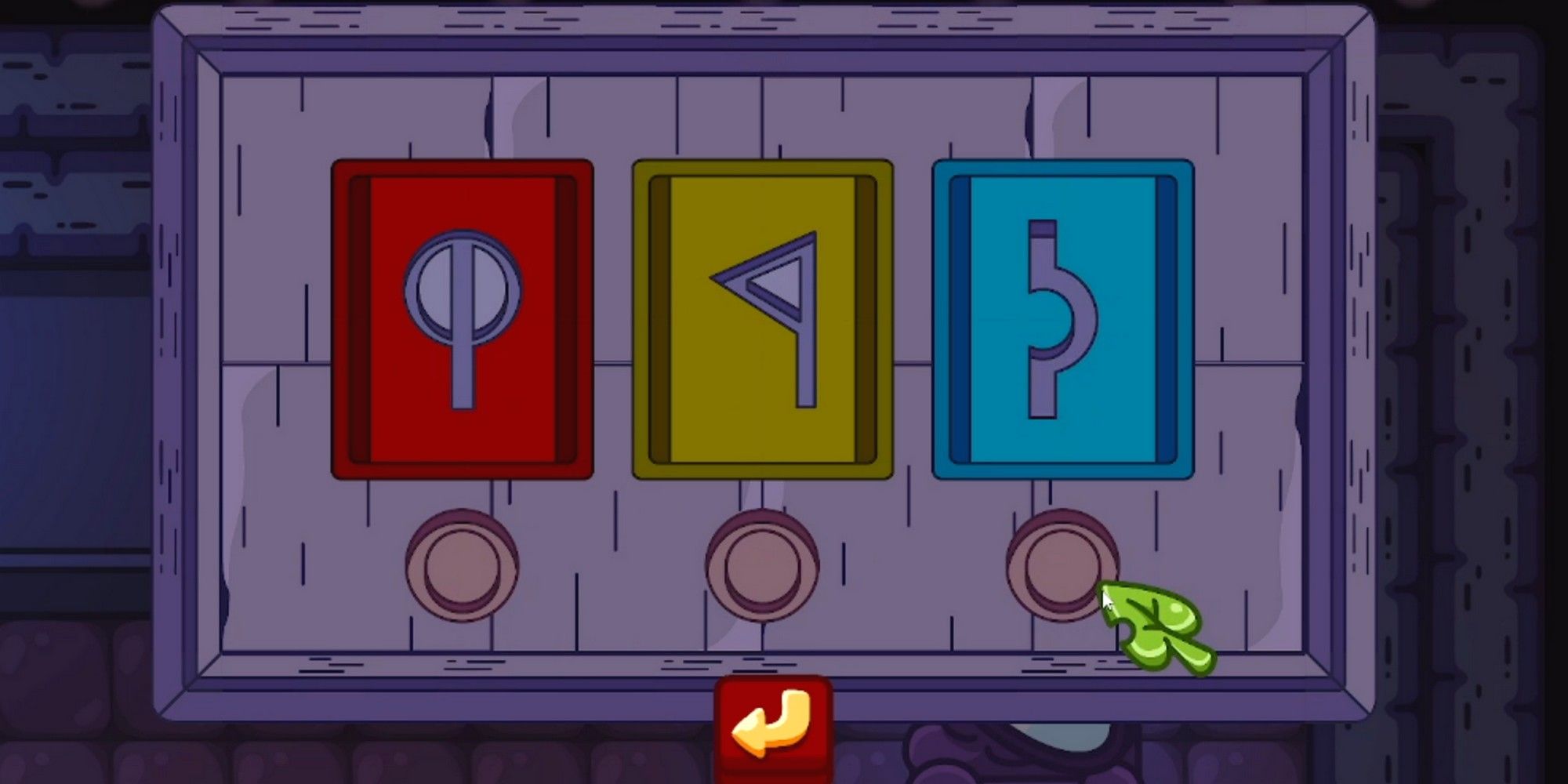 Successfully inputting the right combination will trigger the laser appearing in the bottom-left part of this room, so head onward to get it pointing in the right direction.

For this puzzle, the mirrors you’ll need to connect are all along the outer edges of the room, so you need to get there and move them around. Unfortunately, the floor between them is made of ice, and when you step on it, you move continuously in one direction until coming to a stop on solid floor.

Here are the steps to take in order to move the mirrors. 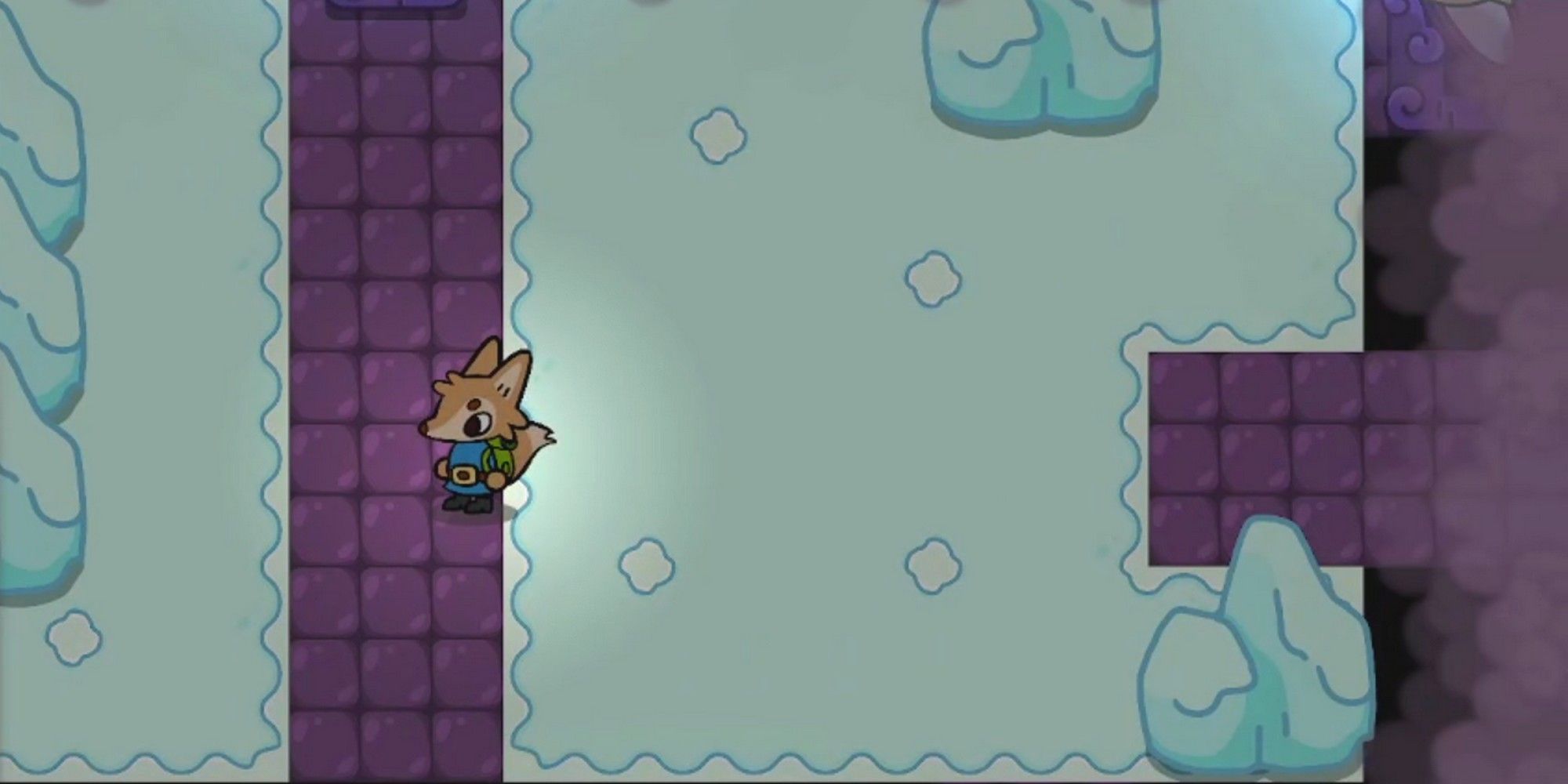 When you’re finished, the path is now clear for the laser to go into the final room, so step off the ledge and send Wes down to the bottom room for his last puzzle.

Remember those tiles with arrows you used on Floor 5 to get a bird through a winding path to the flower tile someplace in the middle of the puzzle? You’re in for one more dose of that before you can finish the game.

You’ve only got one of these puzzles to contend with, though, the solution for which can be seen below. Click the tiles we’ve marked and then send the bird from the first arrow on the top row. If you’ve done this, it will fly to the flower to finish the puzzle. 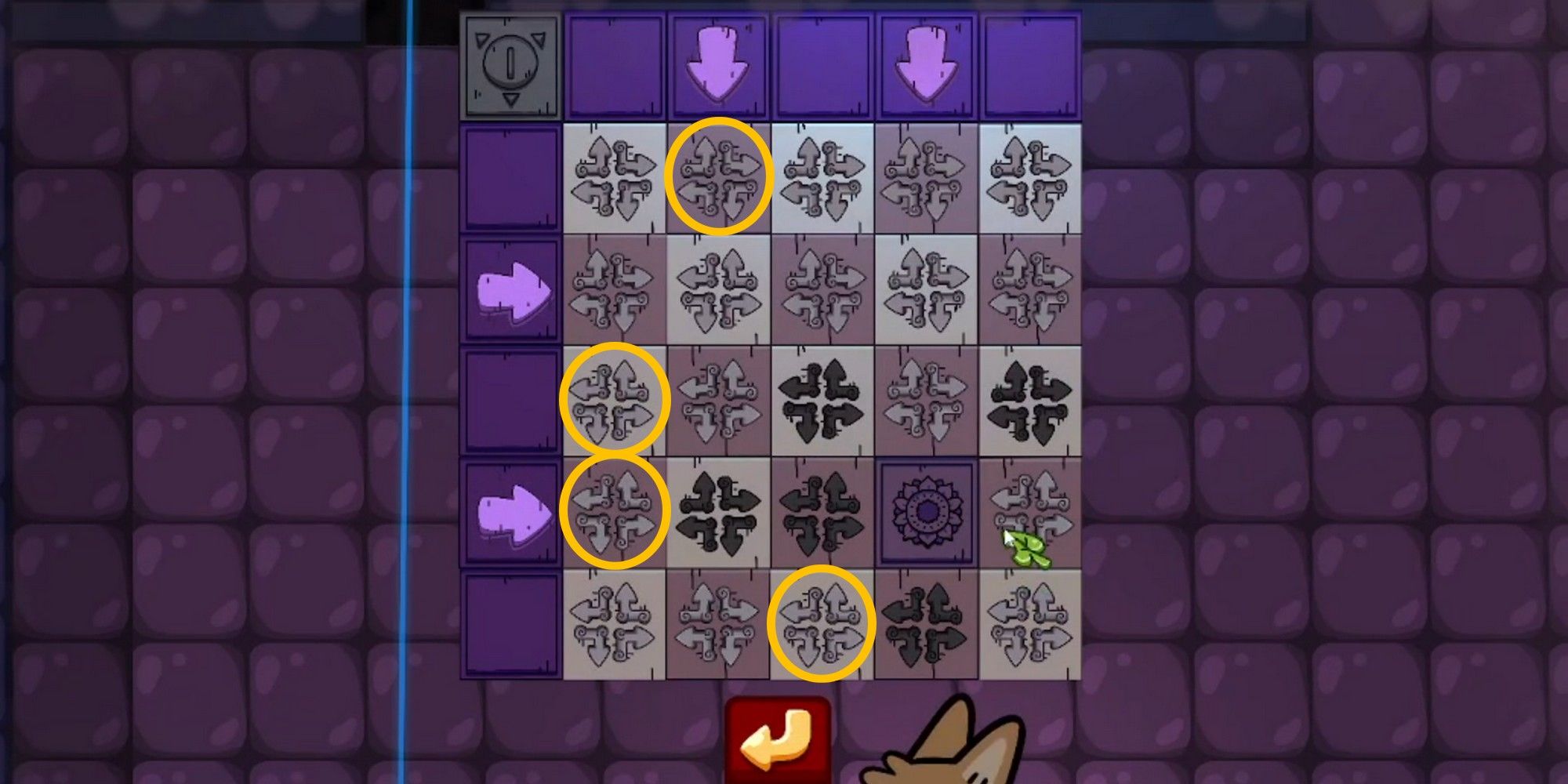 Here, simply situate the final mirror to shine this beam into the left cat eye, and carry on into the newly-unlocked door. 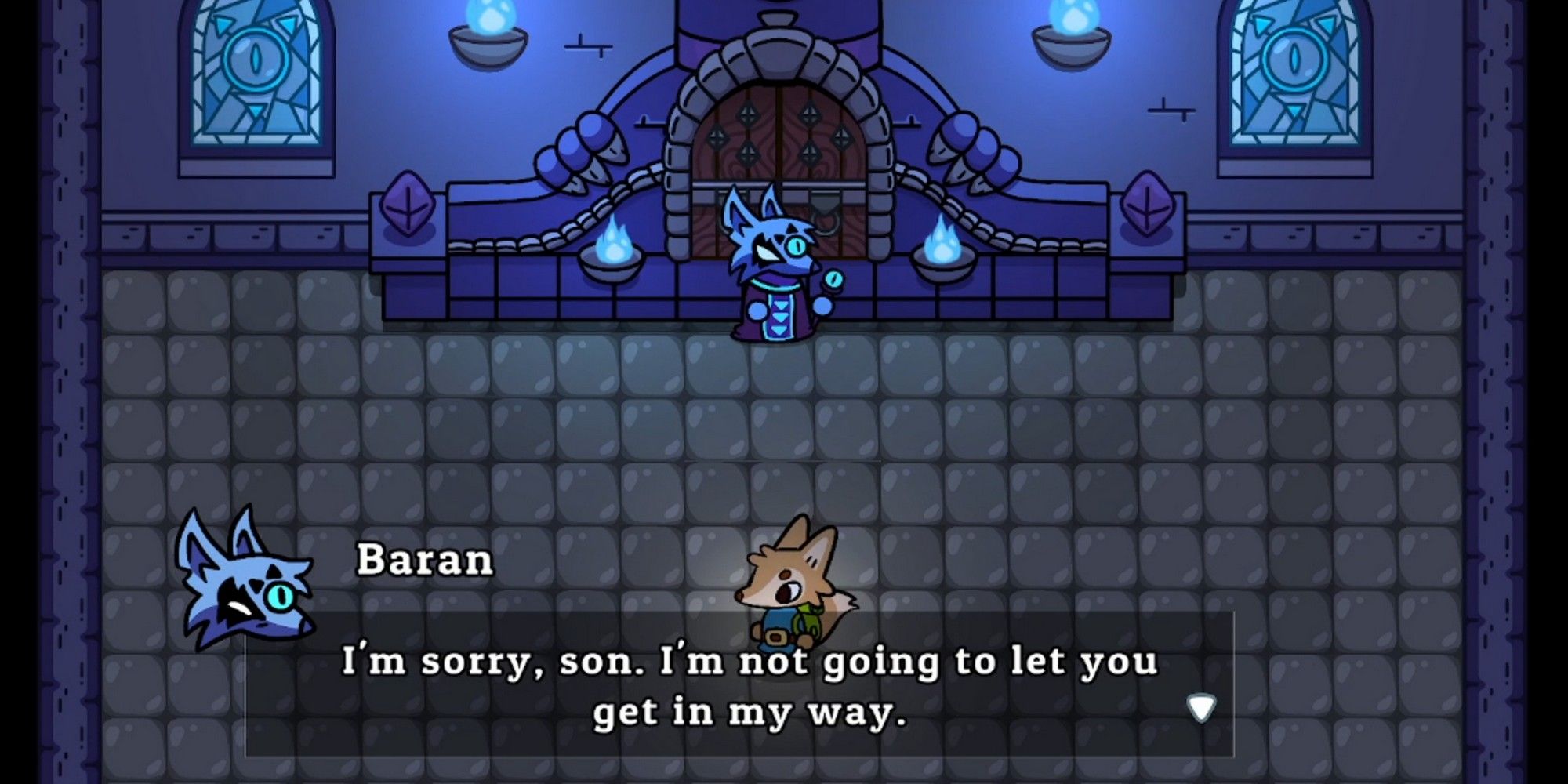 After trying one final time to sway you to his side, your dad declares that it’s time to fight.

This fight occurs in a couple of phases, but the goal of each is the same: avoid the projectiles and floor flames while finding a way to lob attacks back at your dad.

It’s critical to note that being hit even once resets the fight to the very beginning each time Wes goes down.

For the first phase, maneuver Wes around the room and be careful not to stand on any of the patterned holes your dad summons from the floor – the holes shoot fire upwards at you. When he grows tired of not hitting you, a mirror will spawn someplace in the middle area of the room just as your dad starts firing lasers.

When this happens, quickly push or drag the mirror so that it’s in front of your dad. This way, when the laser hits the mirror, it bounces right off it and back at your dad. 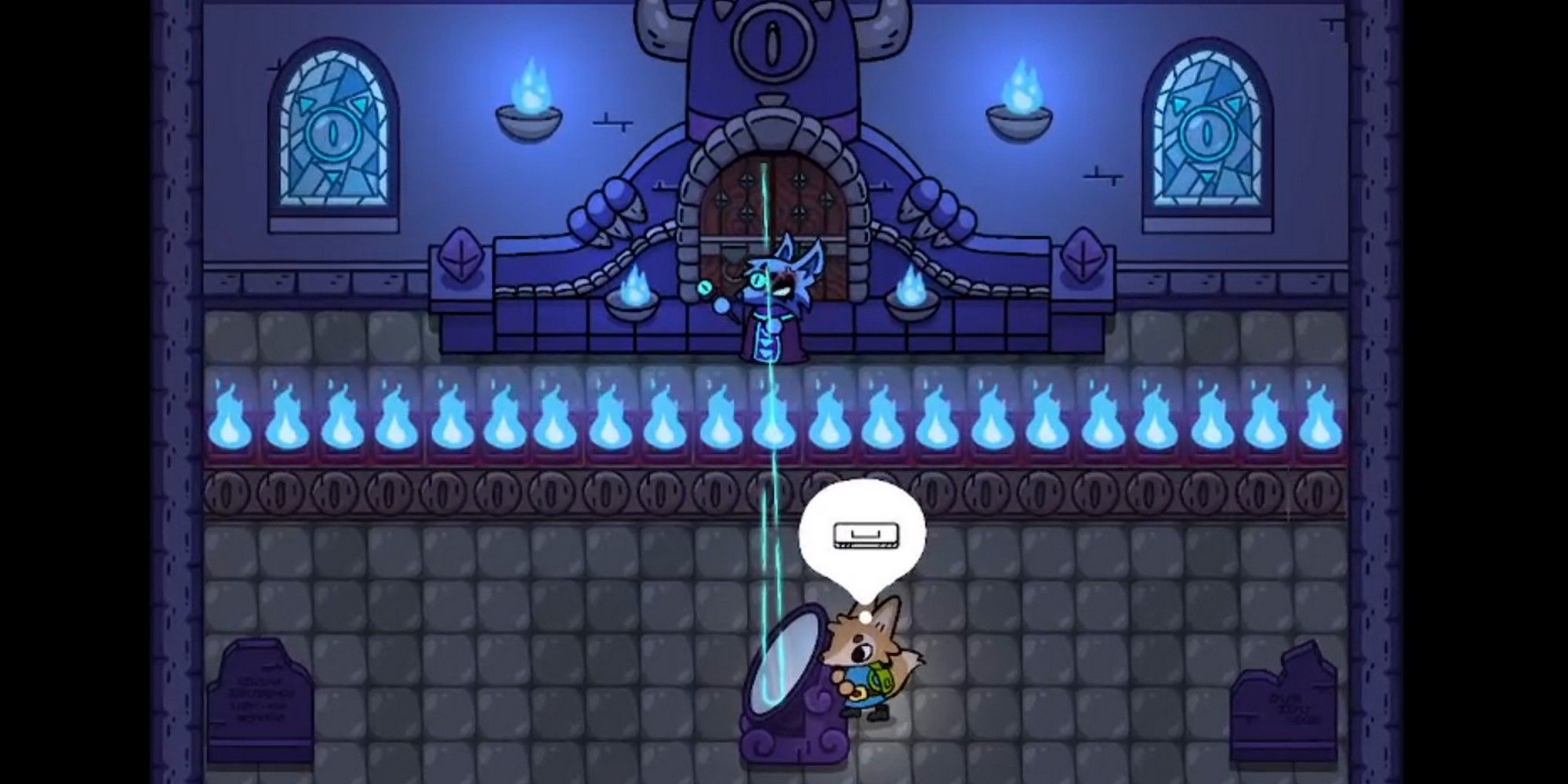 Angry, your father summons a clone of himself that appears along the bottom section of the room to throw projectiles at you. Your dad, meanwhile, will be moving left to right along the top, periodically stopping in place to erect a shield in front of himself.

You’ll need to do this a few times before he gets fed up. Now, your dad will surround the room in flames and come join you in the middle, but not without three clones of himself. While they do all look similar, your real dad will be slightly brighter than the three clones. 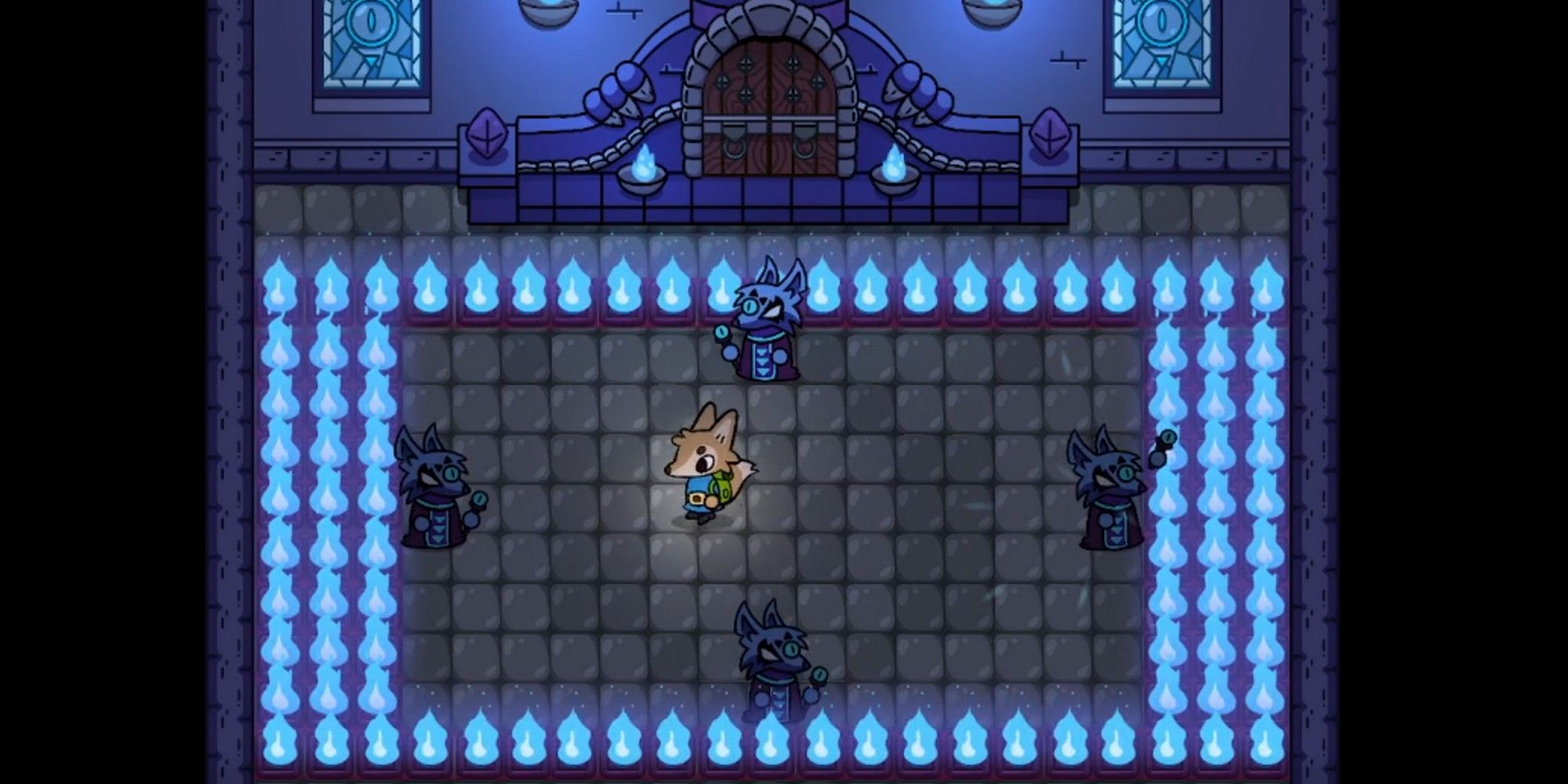 One of the clones will raise its wand to begin summoning a projectile. As it’s charging, do what you did before and stand between your dad and the attacking clone, stepping out of the way once the projectile is fired. After hitting your dad a few times this way, he goes down and ends the fight. 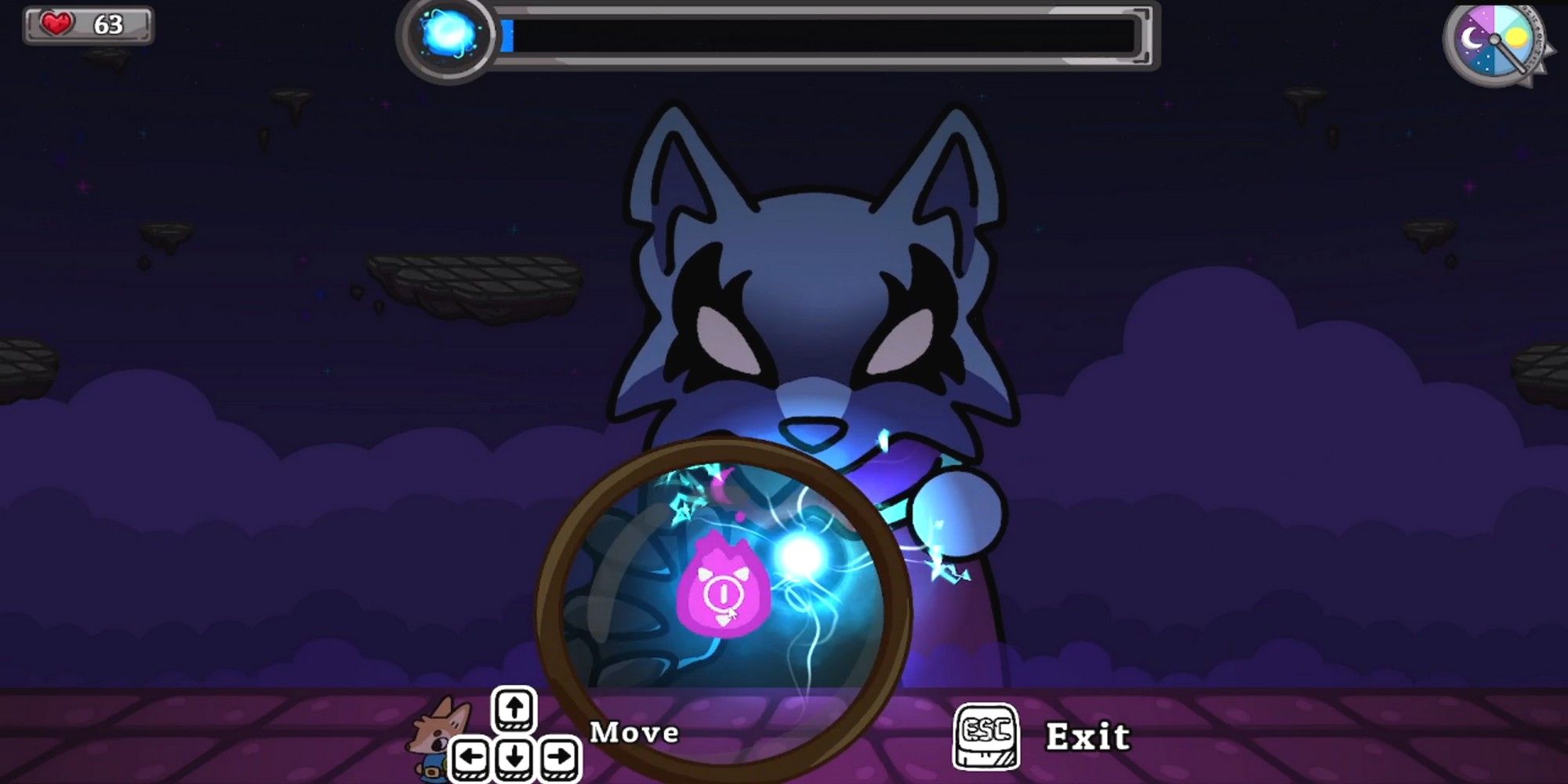 However, your dad is down but not out, as there’s still one major stage left to this fight – and it’s the biggest of them all.

Here, Wes is on a small platform in front of his attacking father, who is looming huge in the background. In order to stop him from attacking you, you need to use the golden magnifying glass to find the pink flame hidden someplace on the screen.

After you’ve focused on the flame for a few seconds, a pedestal will appear on the platform containing a puzzle. You’ll always have a simple version of a random puzzle from within the dungeon to solve, but doing so before the timer maxes out at the top of the screen fires an attack back at your father.

Hit your dad enough times, and he goes down. Defeating him is the final step of the story, so enjoy some cutscenes and the credits before heading into the optional epilogue. 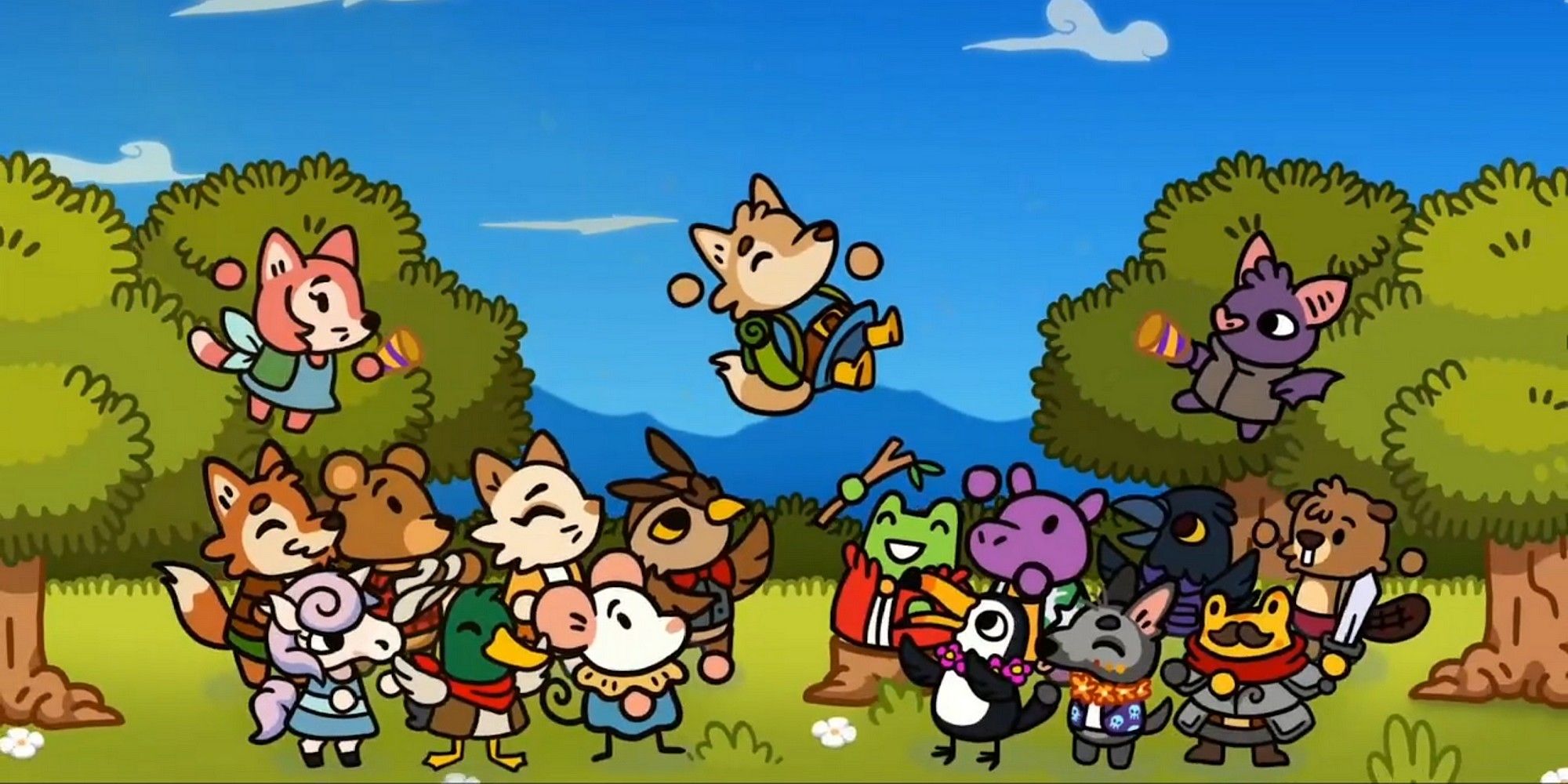 Congratulations on beating the story of Lonesome Village! If you’ve not yet had enough of this adorable indie darling, or you have lingering quests you’d like to finish up, the game does contain an epilogue.

In it, there are no overarching goals or more floors of the Tower to complete. There are a few odd and end villagers you’re still able to free in other ways, and more friendships to bolster. What you do with this open chapter is up to you, so spend some time with the friends you’ve made along the way and bask in a job well done.

Kirby And The Forgotten Land: How To Remove The 3 Wanted Posters In Scale The Cement Summit

Things You Should Never Do In The Sims 4

League’s toxicity falls on Riot and the community, and Hai believes the “problem needs to be fixed from both ends”