For a game that's released hundreds of new cards every year for decades, Magic the Gathering is a surprisingly balanced and cohesive game. Most of the time, you can just read what the card says and trust that that is, indeed, what it does.

But over the years, the way Magic words its cards have changed, and sometimes the way an older card is written would conflict with modern rules. And with the release of the Historic Horizons and the new Alchemy format in Arena, cards can now be adjusted on the fly as well. All of these things are known as 'errata', and the first time a new player encounters it can feel very counter-intuitive. Here is everything you need to know about Oracle changes and errata.

What Is Oracle? Why Is It Important? 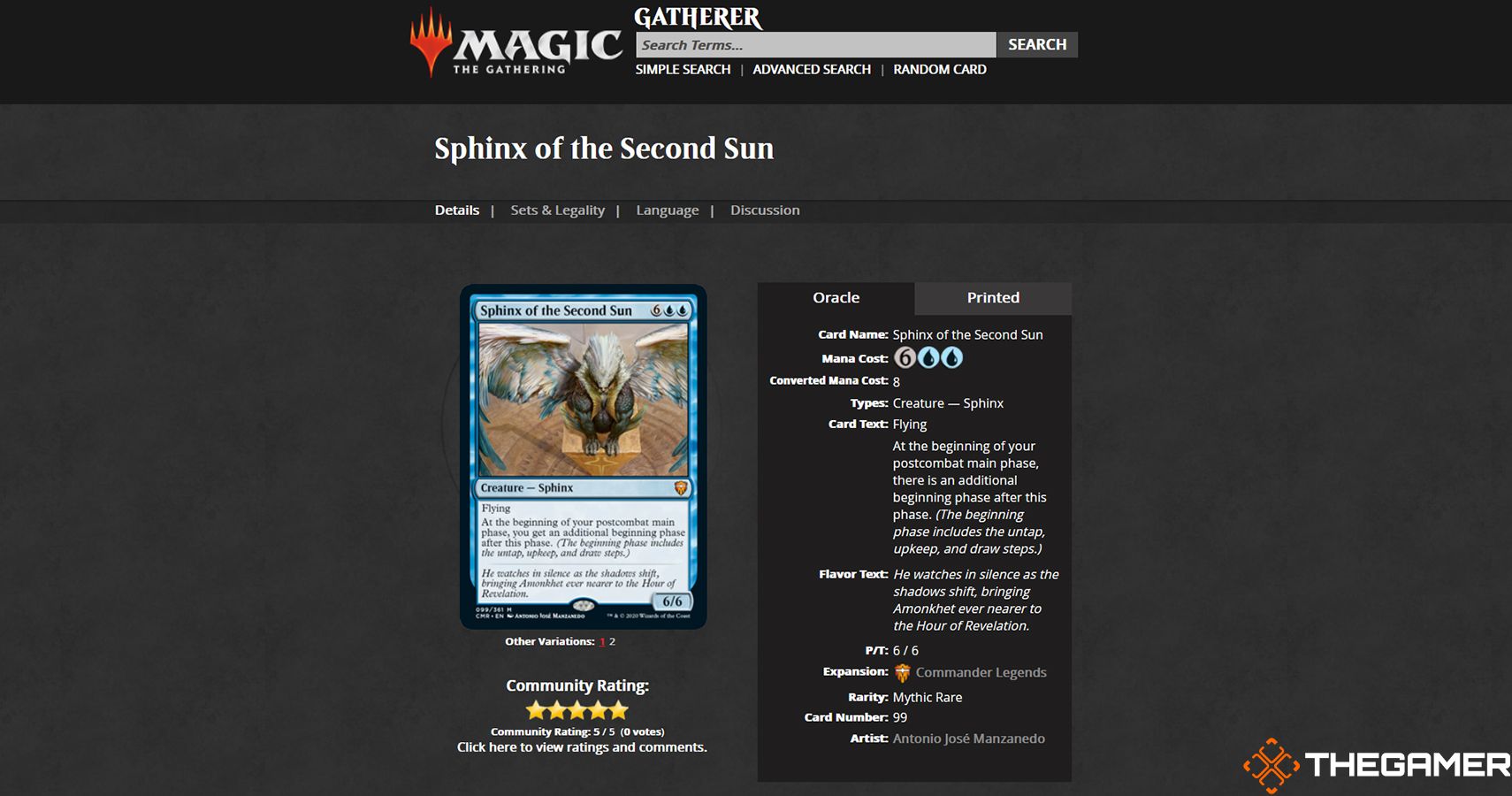 When it comes to errata, you first need to know what 'Oracle' is.

Oracle is the huge database of every single Magic card ever produced (bar those struck from the game due to being racist). It contains not just their names, but also their mana costs, abilities, which sets they've been printed in, and even individual rulings made by judges pertaining to that card.

Oracle itself is an internal tool that Wizards of the Coast uses, but it can be accessed by the public through Wizards' tool Gatherer. There's also Scryfall which is infinitely more user-friendly, but Gatherer is the official one and the best way to get complete and up-to-date rulings.

The important thing is that cards themselves aren't the authority on what that card does, Oracle is. For the majority of cards they match up perfectly, but if a card causes confusion, has outdated terminology, or doesn't work in the way Wizards intended it to, the Oracle text may be updated. This is known as an 'errata'.

Why Is A Card Errata'd?

There are lots of reasons why a card might be "errata'd" (which, like most phrases the Magic community uses, isn't actually a word…). The most common reason is just that the game's terminology changes over time and requires older cards to still officially work within the confines of the game.

More game-changing errata might add or remove creatures types that Wizards wants better support for in the future. In 2007 we saw what was known as the "Grand Creature Type Update", and is one of the biggest mass Oracle changes ever given to the game, and hundreds of creatures had their creature types changed to fit modern design. In 2021 we had the smaller Phyrexian update, where many older creatures were given the new 'Phyrexian' creature type. Creatures like Atraxa, Brudiclad, and Elesh Norn are now considered Phyrexian in addition to their other creature types, even if it doesn't say so on the printed card.

The next reason why a card may be errata'd is if an error meant the card was printed with the wrong text. This happens slightly more often than it should, but it's still a rare occurrence. Probably the most memorable example of this was of Zaffai, Thunder Conductor from Commander 2021, whose text mentions a "Zaffai, Thunder Collector" instead. If you took the card at face value, it would never work as there is no card called Zaffai, Thunder Collector able to deal the damage. Therefore, Wizards issues an errata that simple changed "Collector" to the card's actual name, "Conductor". 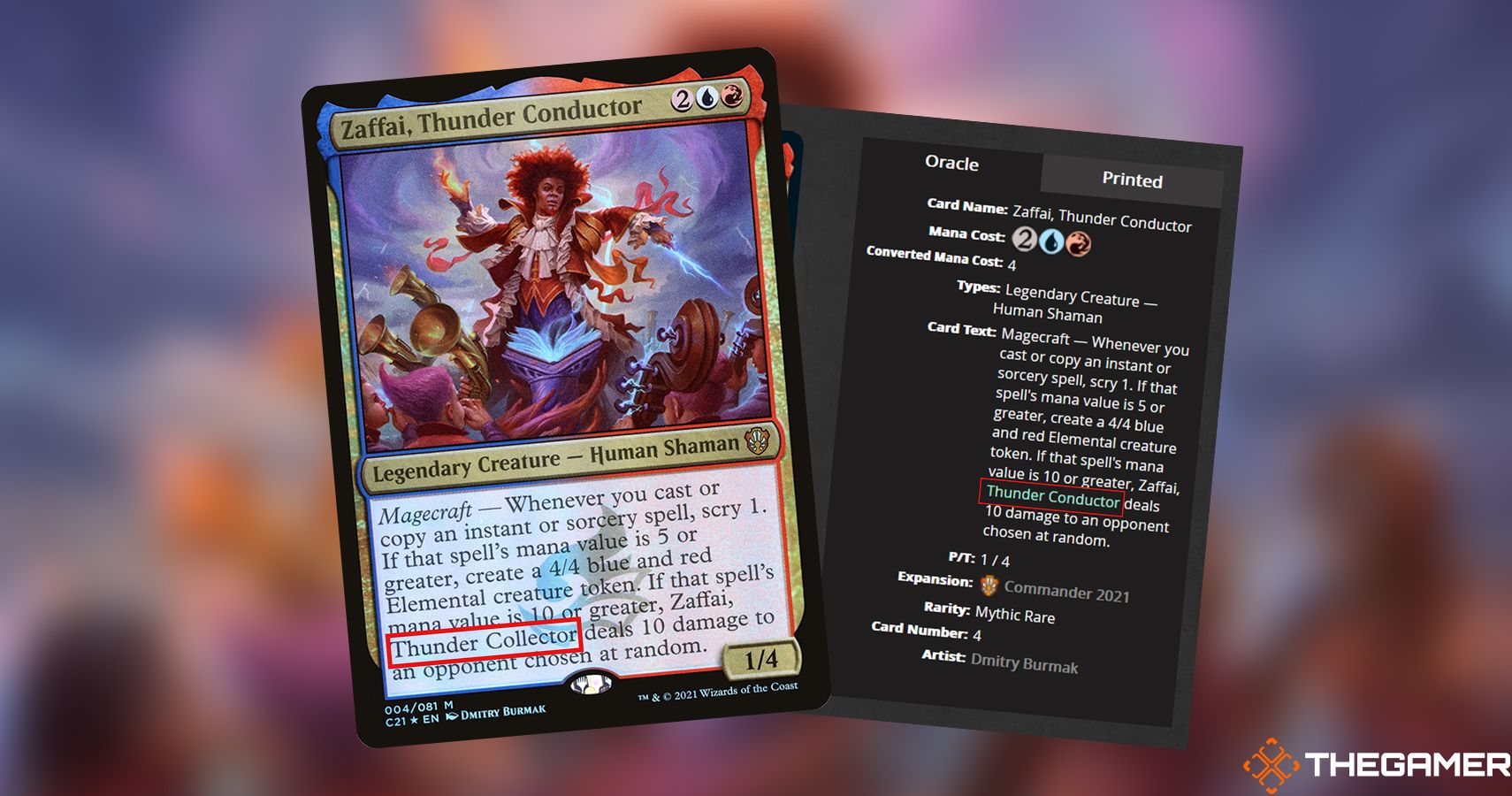 Very, very rarely, a card might have what it does as a game piece changed. This is something Wizards generally refuses to do, preferring to ban the card or just print a different named 'fixed' version later. A great example of this is how Sol Ring is banned in most formats, with future mana-producing artifacts either making less mana or having a higher casting cost to counteract how overpowered Sol Ring was.

The most controversial of this kind of errata in recent history was in War of the Spark with the card Ajani's Pridemate. Before War of the Spark, putting a +1/+1 counter on it whenever you gained life was an option 'may' ability, but was then changed in Spark to be a compulsory ability. It isn't a big change for most people, but it does change what you're expected to do if you miss the trigger for it: in competitive play, missing a 'may' trigger is treated the same as declining to do it, but missing a compulsory trigger is an infraction and could cost you the game. 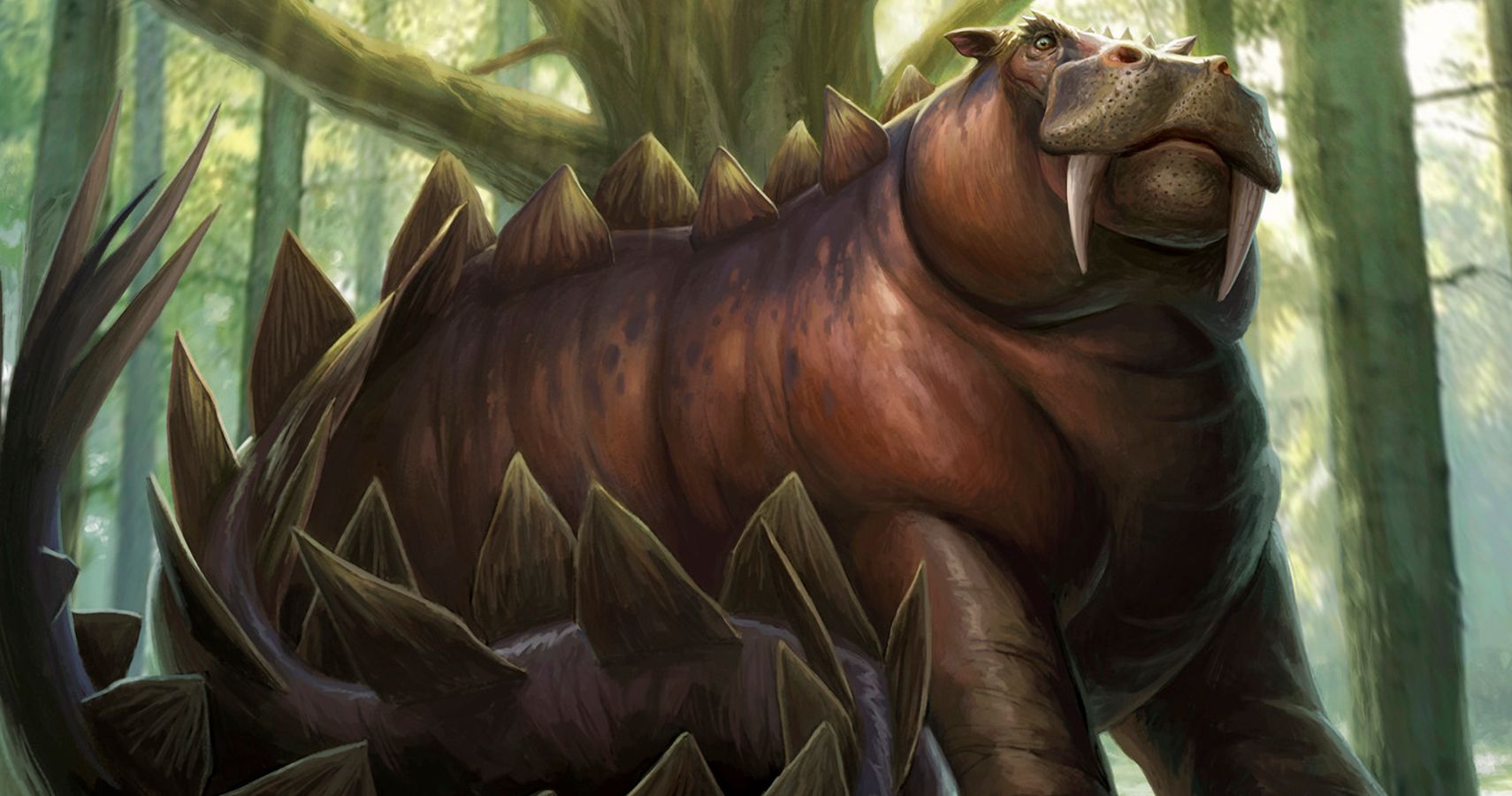 One thing that virtually never happens in Magic anymore is a 'power level errata', where a card is errata'd to adjust its power level in the metagame, instead of the more common balancing strategy of banning and restricting. Wizards used to do this fairly regularly, but in 2006 actually un-errata'd cards that had this, and put in a policy preventing power level errata from happening again.

For example, Basalt Monolith had received a power level errata that prevented it from using its own mana to untap itself. This was then removed in the un-errata'ing of 2006, and in 2020 it was even added to the card's Oracle rulings that "if you've found a way to generate an unbounded amount of mana with it, you're probably right". For all but the most edge of edge cases, power errata isn't a thing that needs to be worried about by a Magic player in the 2020s.

The last time there was anything close to a power level errata came in the came of Ikoria: Lair of Behemoths. The Companion mechanic as a whole has to be overhauled very quickly, as the original mechanic let you cast a Companion creature straight from the Command zone. This proved to be too powerful and completely warped most formats, and so Wizards of the Coast had to step in and change the entire mechanic. Now, it simply lets you pay two mana to move the card from the Command zone to your hand, where it can be cast like a normal creature. Such a huge and fundamental change to a mechanic is so rare that Companion continues to be one of the most controversial things added to Magic in the last few years, and regularly comes up as a point of discussion when talking about errata.

What About Digital Errata? 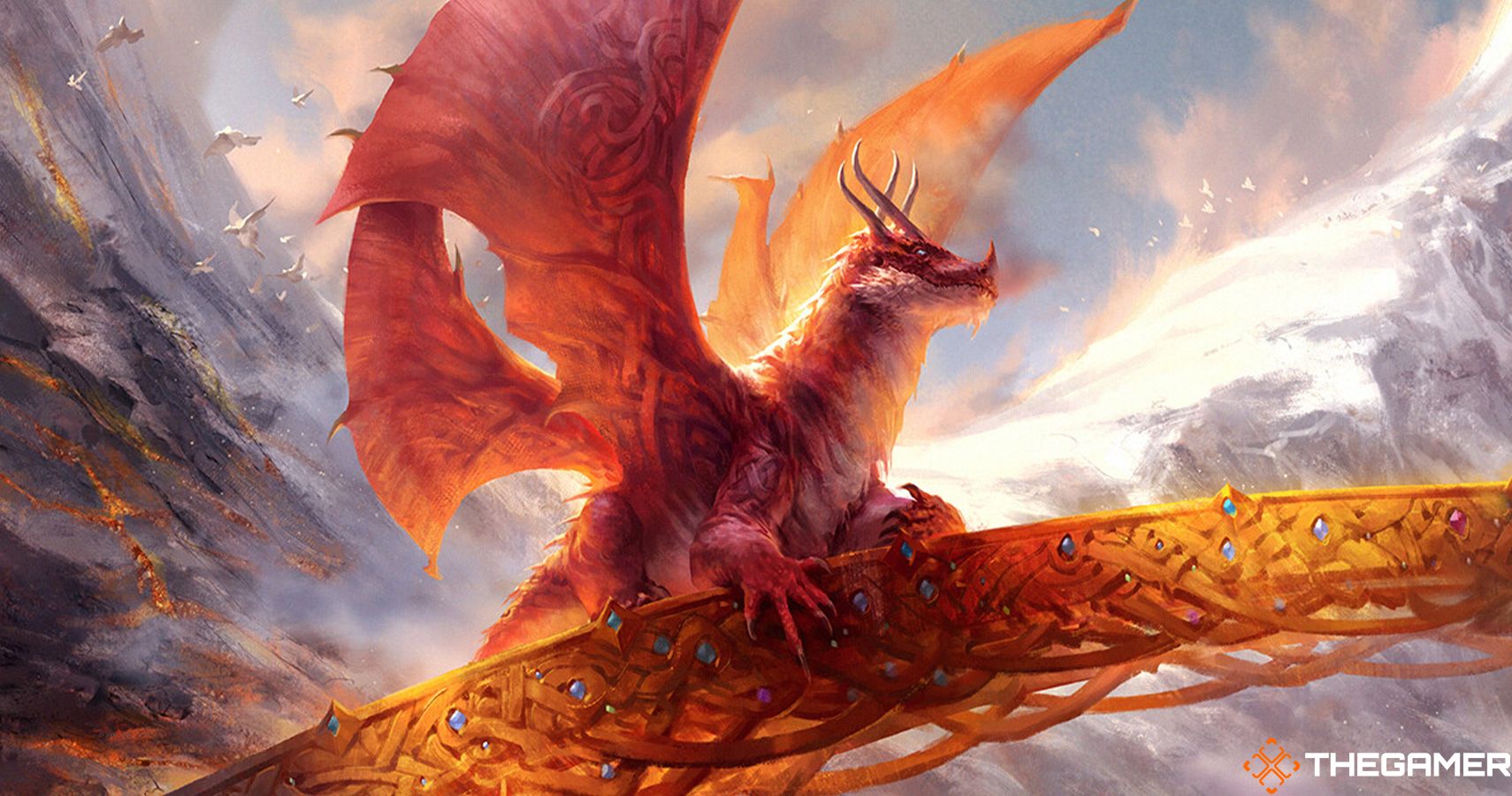 For Historic Horizons in Magic the Gathering Arena, Wizards opened up the game to the potential of having its cards digitally errata'd. While changing what a paper card does is a big task that could take years to fully take hold, in digital it's easy as everybody's collections can be changed at the same time.

These digital errata are a lot more aggressive than print ones, but were originally only used for the digital exclusive cards introduced in Historic Horizons. For instance, Faceless Agent was changed from a 2/2 to a 2/1. With the introduction of the digital-exclusive Alchemy format, though, now any card released for the game is open to be radically rebalanced: a good example is Goldspan Dragon, which has had the phrase "or becomes the target of a spell" scrubbed from it to make it a less powerful card.

Digital rebalances for Historic and Alchemy aren't the same as official Oracle errata – they're not changing how the card works in the whole of Magic, just the way they work in those specific formats. And fortunately, because they're digital-only, the changes will appear on the cards themselves to avoid any confusion.

How Can I Tell If A Card's Been Errata'd? 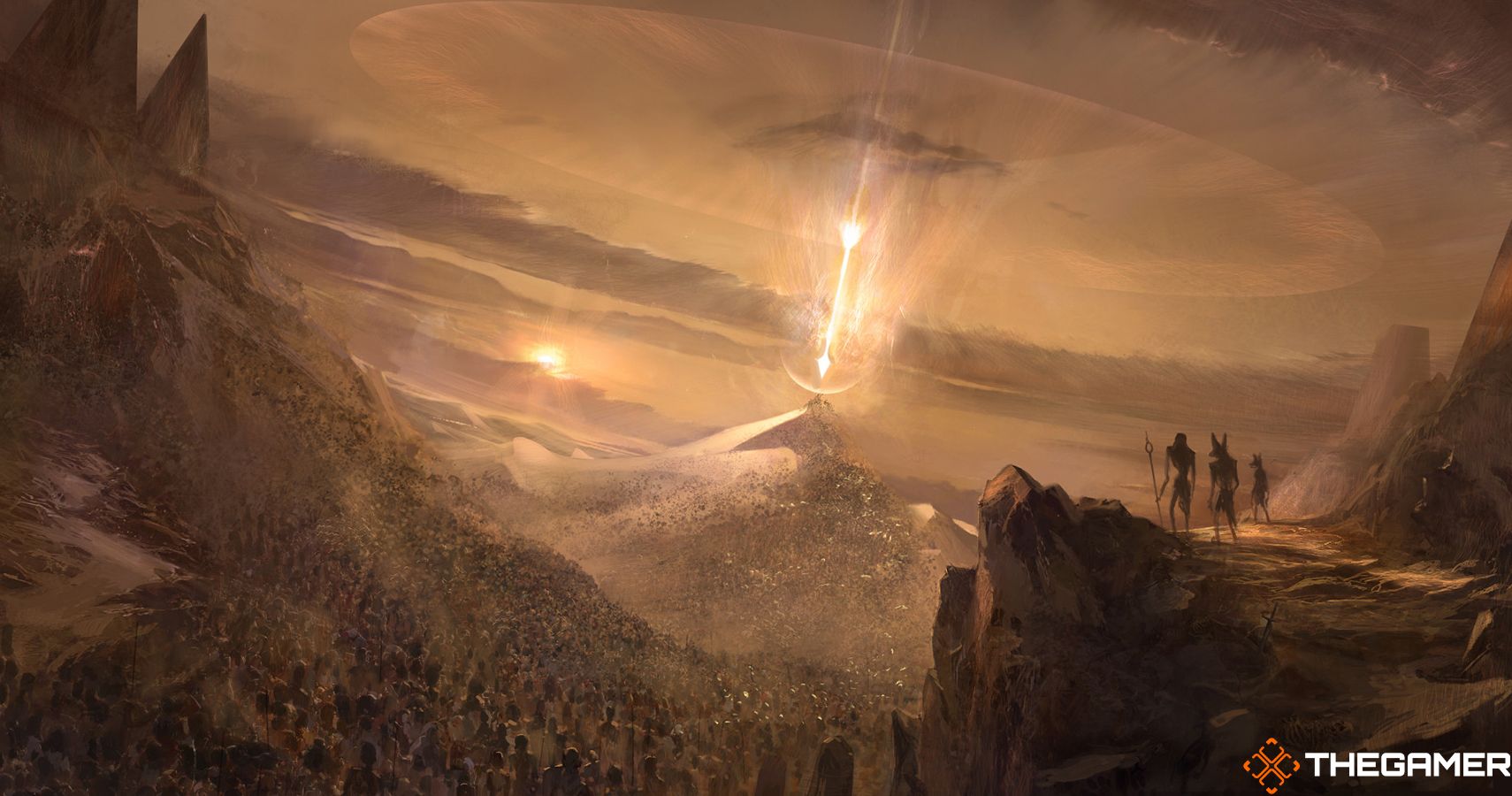 Short answer: you can't just by looking at the card in isolation.

The long answer is the only way to tell if a card has been errata'd is to check a website like Gatherer or Scryfall and read the official Oracle text. If you're suspicious of a card, or aren't quite sure how it works, it's good to develop the habit of checking on those sites to read up on the official rulings for it.

Other than checking every card, as you play Magic you'll develop a sense for which cards might have been errata'd based on what they seem to do, and you can more easily pinpoint them as you gain experience. For example, you might pick up that the keyword 'Bury' is no longer used in the game, and has been replaced with either 'Sacrifice' or 'Destroy X, it can't be regenerated'. If you come across a card that says 'Bury', you know it's been errata'd.

Likewise, If a card feels like it does something outside of Magic's usual design, there's a chance it was a mistake on the printing and has been errata'd. Hofri Ghostforge reads on the card that you can any creature exiled with it back into your graveyard, even if you didn't actually own the creature you exiled. Taking other people's cards and putting them in areas like the library, hand, or graveyard just isn't done in Magic, so you develop a suspicion that it might have been errata'd. You then check Oracle and see that Hofri was errata'd to officially read "return the exiled card to its owner's graveyard'"

Errata can be confusing, but fortunately, the ones so big they can ruin a game are rare. Wizards would rather ban a card and make a fixed version with a new name in a later set than massively overhaul an existing card, and any that have been minorly errata'd tend to receive their updated text in future printings. An old adage in the Magic community is "reading the card explains the card", and while that isn't technically always true, it is a good thing to keep in mind when playing.

PowerOfEvil claims that NA is underrated, and feels confident about winning LCS Finals

Where To Find Nintendo Switch Joy-Cons Online: Available At Amazon, Walmart, And More