Manticore Games has opened alpha testing for its Core platform, a do-it-yourself game construction set that lets players create their own games.

The Core platform is a free platform for game development and a community for player-creators, or people who are fans of games and always wanted to try their hand at creating their own titles.

It’s the brain child of Manticore Games CEO Frederic Descamps and creative director Jordan Maynard, who previously created game startups such as A Bit Lucky, which Zynga acquired in 2012.

In an interview with GamesBeat, Descamps and Maynard said that Core makes game design radically accessible, allowing people to collaborate and remix shared content. Core also allows creators to publish their games in a matter of seconds. I saw this happen in person during a demo at Manticore’s headquarters in San Mateo, California. 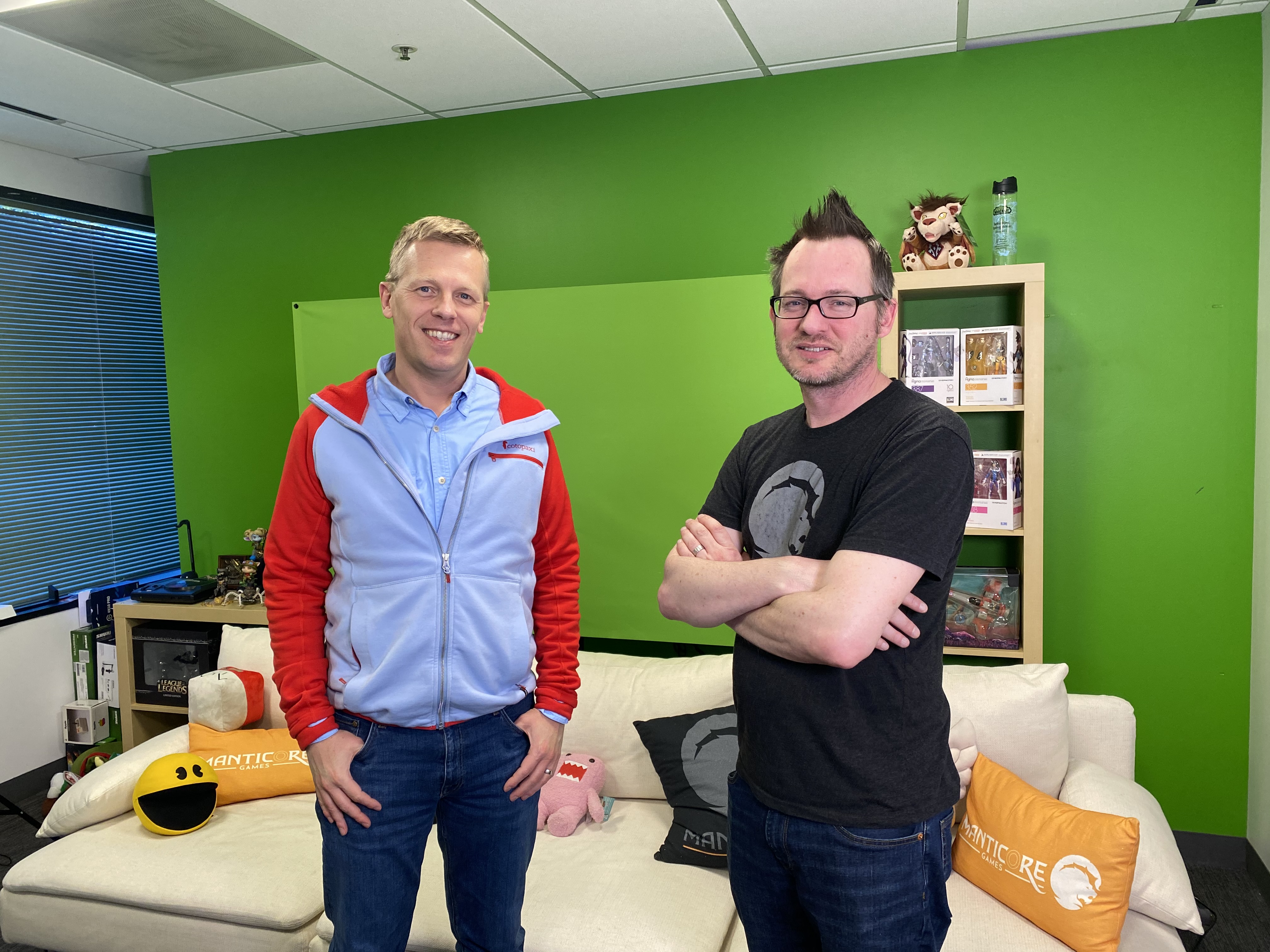 Above: Frederic Descamps (left) and Jordan Maynard are cofounders of Manticore Games.

“The next big wave of the user-generated content revolution is going to be games,” Descamps said. “And games are very hard to make. 90% of games are commercial failures. One of the reasons is the high technical barriers. Today, even in 2020, it’s still really hard to make multiplayer games. Design is hard, the tech is hard. You have to think of your game as a service and scale it. You have to find funding. You have to find a publisher. You have to hire people, and if you’re lucky enough, you might be able to release your game.”

“We’re really looking at lowering the barriers between creativity and the market,” Descamps said. “We’re trying to simplify greatly the way games are made, collaborated upon, shared, and published. You can do a demo and publish it in a matter of minutes.”

Manticore hopes that the result will be an endless universe of multiplayer games to play and worlds to explore. From first-time game makers to experienced developers, Manticore wants everyone to help redefine game creation, distribution, and play by joining the open alpha today at CoreGames.com.

The ease of creating 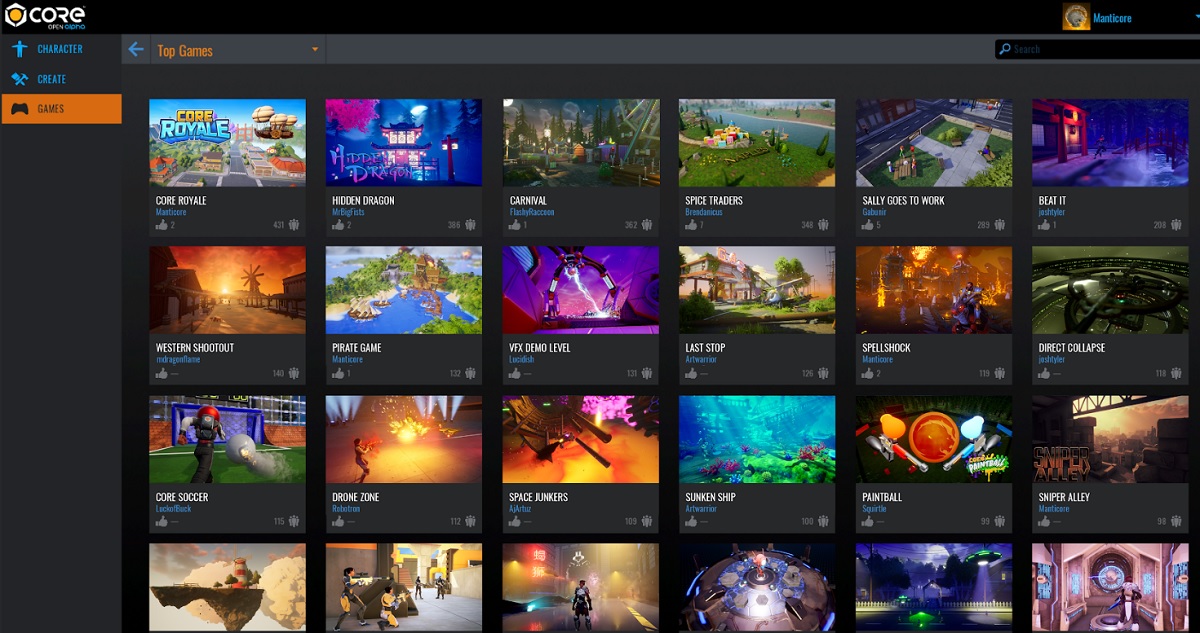 Above: Manticore Games already has a lot of titles created by gamers on its Core platform.

Core’s mission is to empower and discover a new generation of creators and give them the tools to learn, experiment, and create new forms of entertainment.

But these games don’t have to have the blocky style of Minecraft or Roblox. The Core platform combines its accessibility with the power of Unreal Engine to give creators a fast, easy way to make and publish high-quality online multiplayer games.

Programming skills are not required but Core’s opt-in complexity lets more experienced users script game logic, create assets, and more, to produce original games. Or creators can remix and reimagine any content shared by others on the platform, generating new mash-ups within the community. With Core, creators can publish their work instantly.

In a demo, Maynard showed how easy it was to create games with building blocks made either by the company’s own programmers and artists, or by taking something a fan has done and reusing it in a remixed creation. The building blocks include everything that a multiplayer game needs, such as a tool so players can create their own avatars, or game characters. Players can also import buildings into their own game, using assets that have been created by others inside Core. That helps players deal with difficulties like the physics of cars. 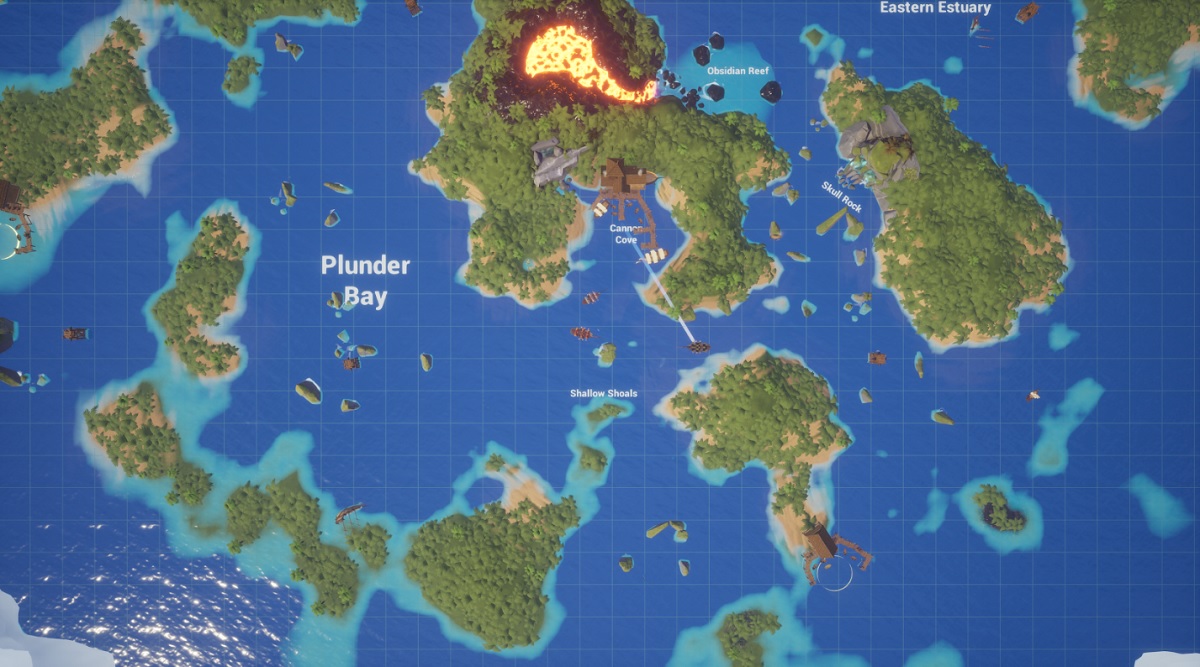 Above: One of Core’s users created a pirate game.

“The physics of the Core platform basically gives you everything you need to make a game,” Descamps said. “You can ask the community to make it for you. You can make it yourself. You can program it yourself. So it’s it’s very open-ended as a platform.”

As he said that, he created mountains inside his own Core demo game. 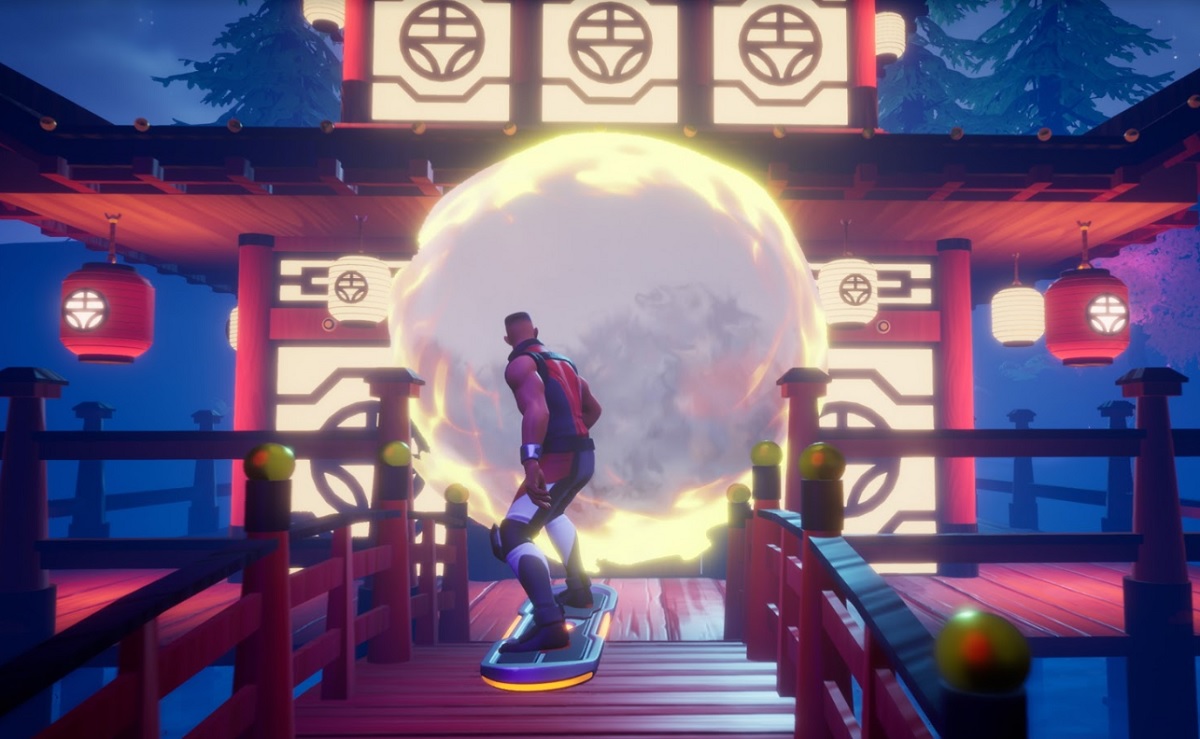 Above: Manticore Games’ Core lets users portal from one game to another quickly.

“I can say that I want my game to take place in the snow or in the desert and it changes just like that,” he said. “I can start making some basic 3D arches or whatever I want to do. Or I can use community content. And community content is anything that user has made that they’ve decided to share with the community. It could be as simple as something like whatever tree here that’s colored all it is something as complex as a construction kit to make a full game.”

Since December, a lot of creators have been working on test games, including students who are studying game creation. A contribution by a creator can be as low level as creating a piece of furniture for a room, or a weapon that can be reused. Players can share for free, or simply ask for credit, or they can ask for revenue sharing.

At first, the Core platform won’t have its own asset store, where creators can shop for things to use. Over time, there will be such a store. Maynard showed how you could portal from one game to another game to another game, with the scenes changing quickly.

This isn’t Roblox or Minecraft 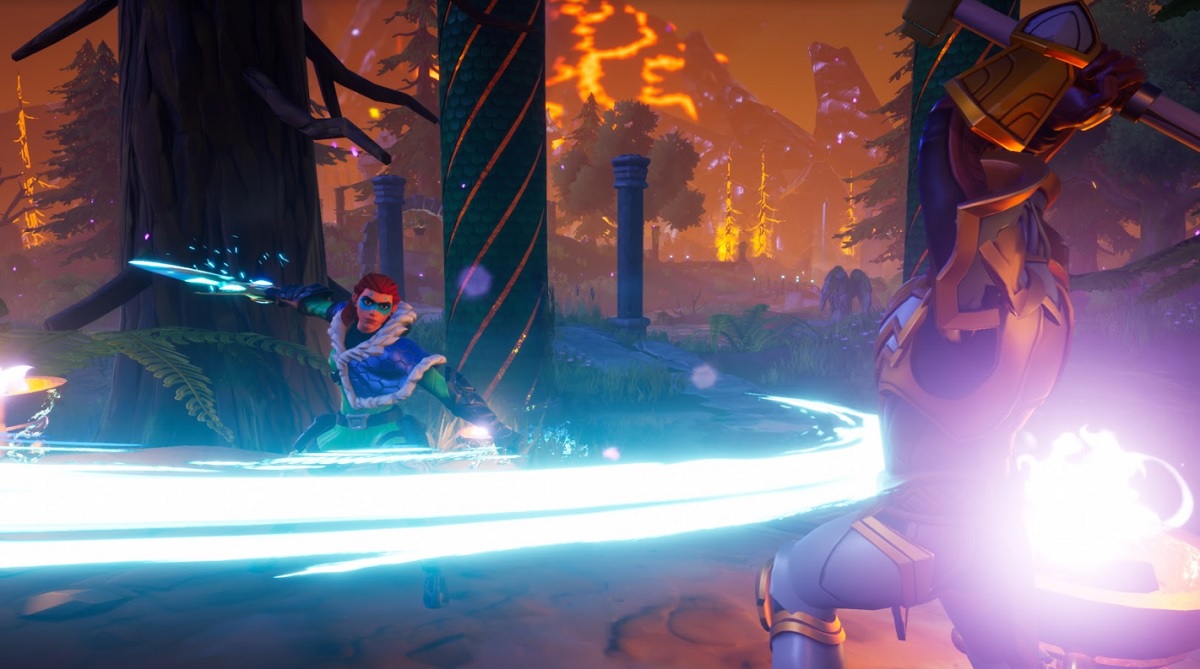 Compared to Minecraft and Roblox, Core is different. Core is an editor for games that exists as a layer on top of the Unreal Engine. Core also has a multiplayer layer and game service layer.

“So you can see the ease of use, where there is no comparison to the speed at which you can develop games, collaborate, and exchange,” Descamps said. “You can drag and drop games on top of each other to create something new. You can put a game inside a world.”

This is different from how games are normally created. Traditional game development engines are very regimented, with a lot of complex tools inside the engine. Even though these game engines make the work a lot easier, it usually requires the work of professionals — programmers, designers, artists, and others — to make the games that become popular.

“Here it’s a one-stop shop, with an editor, a studio, and a whole publishing arm,” Descamps said. “You can create the game and have multiplayer servers set up around the world. We support all genres, from first-person shooters to role-playing games. We want the creators to be able to get credit for their work, making a living, and get rewarded.”

Manticore Games will be adding features on a regular basis to continue to improve the platform while it’s in development. For players, Core already offers an endless multiverse of free games and worlds to explore. This expanding universe of multiplayer games includes dozens of interactive experiences made by Core’s Closed Alpha creators as well as four complete games designed by Manticore Games, which showcase the diversity of game content possible in Core. 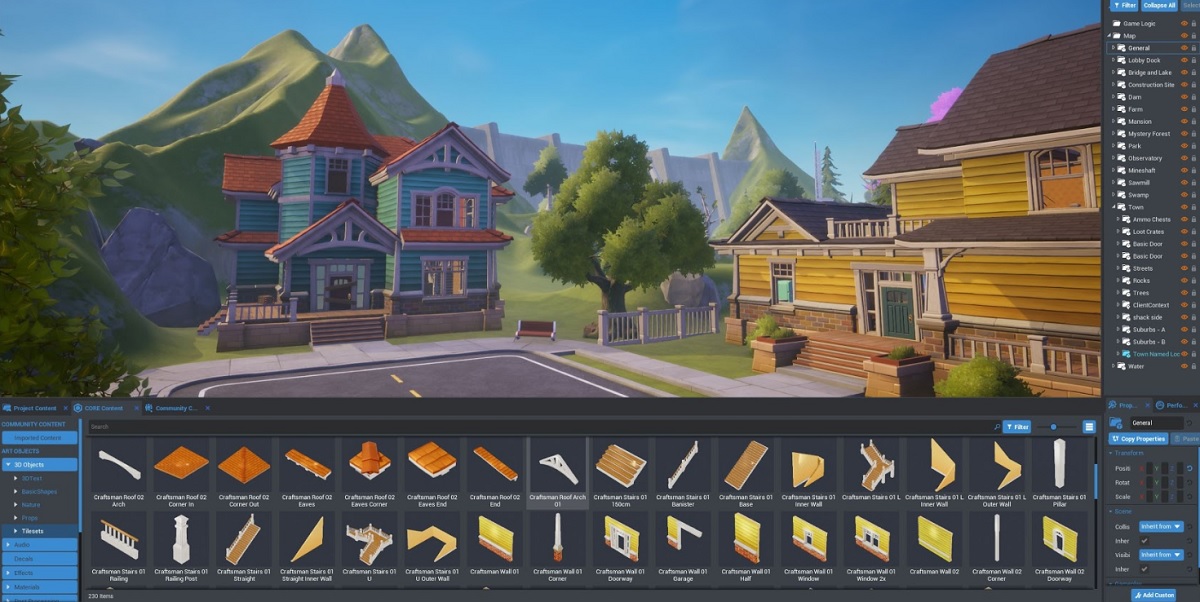 Above: Manticore Games lets players create titles from building blocks from the company and from other players.

“We are live with the open alpha,” Descamps said. “We’re building a two-sided marketplace. On the one hand are creators and the other hand are players. Our definition of creators is very broad. In the past, there was no way for the average person to make games. People who have seen our demo compare this to creators on YouTube or Twitch. You now have people who are mega-celebrities from what they create.”

The games created with Core can be mobile, PC, or console, as the Unreal Engine enables all of that. The Core platform is cloud agnostic, so it can sit on top of platforms such as Amazon Web Services or Microsoft Azure. 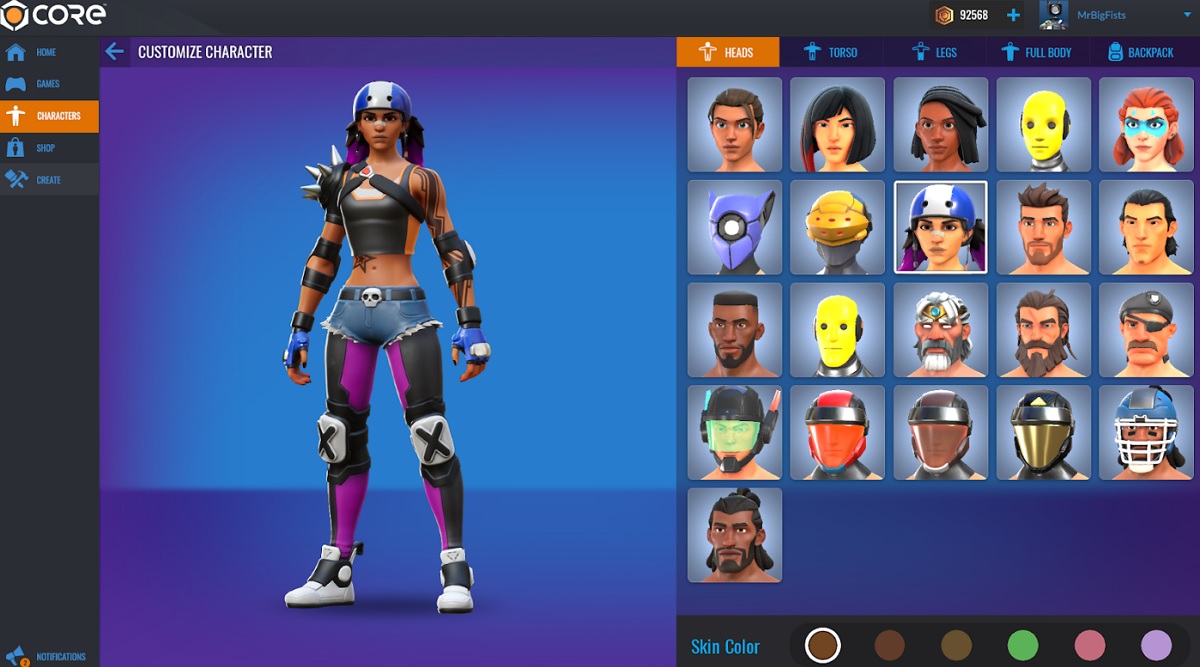 Above: Manticore Games makes it easy for users to create characters.

Manticore will have to make sure that players don’t put copyrighted information or art work into the games. One of the things that will curtail that is you have to create within the game platform, rather than import them from outside.

“Like any UGC platform, we will have to deal with policing, guidelines, and educate the community,” Descamps said. “It starts with the community of creators, about a focus on creativity, being welcoming, and being supportive. If someone reports a copyright violation, we are following the best practices and will deal with it. We do not want to be an anything-goes platform.”

Some players may not be interested in creating games. They could create social hubs, and that’s fine with the Manticore founders.

Core will surface the best work through upvoting, with various kinds of leaderboards.

“Our users keep surprising us with things that we didn’t think were necessarily possible,” said Maynard. “One of our users made a very cool chess level, where you actually go and you sit down and you play chess against other players. And other people can just walk up to it in a 3D scene and watch the pieces move, like spectators.”