What do the Mortal Shell Tarnished Seals actually do? Read on to find out.

Mortal Shell throws a lot at you early on. You not only have to come to grips with the combat mechanics, weapons, shells, and more in a relatively short amount of time. The Tarnished Seal abilities are perhaps the easiest to overlook when trying to just focus on surviving, but can be a major advantage if given some attention. Right off the bat it will allow you to parry attacks, plus give you a warning when an attack cannot be parried, but there’s so much more to the Tarnished Seal you can easily miss out on if you don’t explore the system. Here are all the abilities it can grant you, plus how to find them.

You will acquire the Tarnished Seal from the Old Prisoner NPC right at the beginning of Mortal Shell. It will come infused with healing ability by default, which will restore some health when you perform an Empowered Riposte. Further abilities will need to be unlocked by returning to the Old Prisoner so he can infuse them. This is necessary to complete the game, but there will be no story spoilers in this guide aside from boss names. 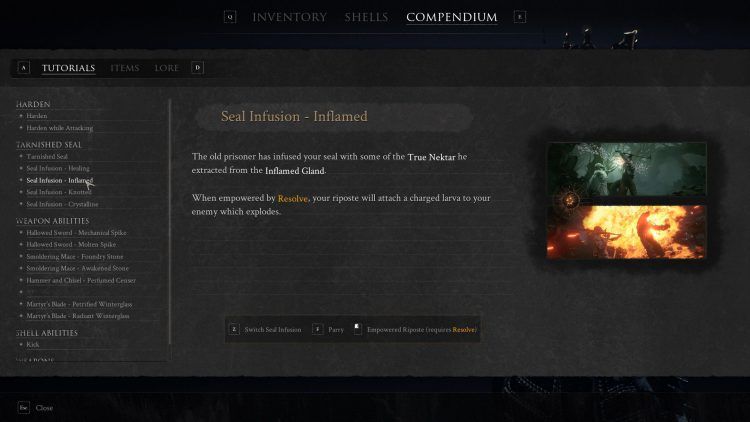 Once you make it the Shrine of Ash area after Fallgrim and defeat that area’s boss, Imrod, The unrepentant, you will pick up the Inflamed Gland. Take this all the way back to the Old Prisoner to give you the Inflamed Seal Infusion. When you have this infusion equipped, a successful riposte will stick a glob of lava onto the enemy attacking you that will detonate. 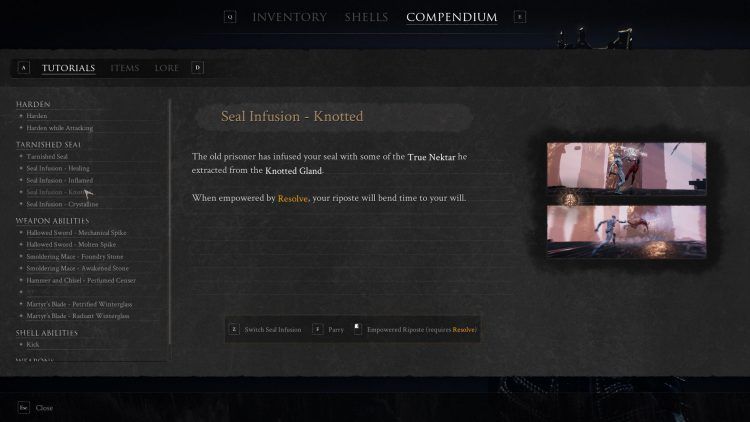 The second zone you can visit after the Shrine of Ash is the Seat of Infinity. Make your way through this zone and defeat the boss Crucix, The Twiceborn to receive the Knotted Gland. Once again, return this to the Old Prisoner to get a new infusion. The description for this seal says “your riposte will bend time to your will.” What that really means is a perfect parry will temporarily freeze time, giving you a chance to attack or back off depending on the situation. 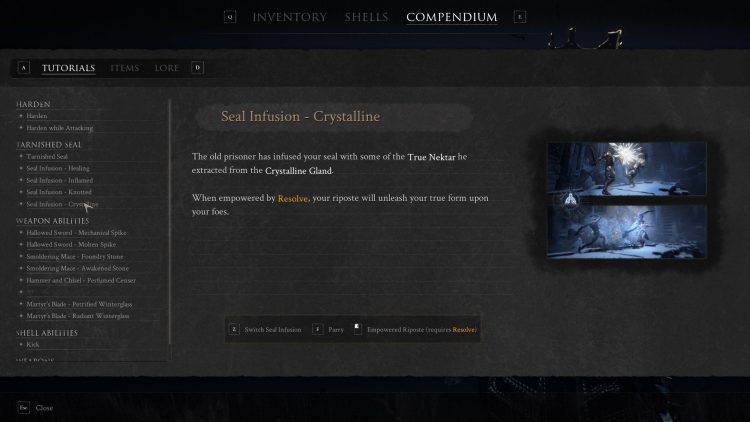 This is the final ability you can get for your Tarnished Seal. You will get the final gland, the Crystalline Gland, from Tarsus, the last boss in the Crypt of Martyrs. Pass it over to the Old Prisoner to gain this last ability. Again the description isn’t too helpful, simply stating that “your riposte will unleash your true form upon your foes.” What this means in practice is that your character will temporarily abandon their shell and unleash a barrage of attacks on the enemy from multiple angles for a short time dealing a ton of damage.

Is is important to note that you can only have one of these Tarnished Seal abilities active at any time. As mentioned, you will have to bring these glands to the Old Prisoner at some point to progress the story, but it is up to you to remember to swap to the new ones as you get them. You can see which ability is active by the symbol right next to your health bar, and swap which one you want to have by pressing Triangle, Y, or Z depending on which platform you’re playing on.

Switch Exclusive Ninjala Has Been Delayed By Almost A Month