Real-time transit can be a dilemma for municipalities that lack scalable infrastructure. Tasks like routing, timing, and asset management are tough to optimize without a system for moving the necessary pieces into place. And with the number of heavy-duty transit buses expected to surpass 57,700 in countries like China by 2022 and congestion in some major cities on the rise, transit planning isn’t likely to become easier anytime soon.

That’s where Tel Aviv, Israel-based Optibus aims to make a change. The startup, which emerged from stealth in 2014, spent three years developing the AI that powers its software-as-a-service transit operations product designed to help plot and schedule the movements of drivers and vehicles. To support the development of a new platform called the geospatial suite, which seeks to improve transportation networks through the use of data-driven planning, Optibus this week closed a $107 million series C round co-led by Bessemer Venture Partners and Insight Partners.

Optibus was founded by Amos Haggiag and Eitan Yanovsky, who developed the company’s core technology in their spare time, working on weekends and evenings. Haggiag learned about some of the problems plaguing mass transit planning from his father, the CFO of one of the largest transit companies in Israel. The two friends developed a working prototype and sold it to several transit operators in Israel before acquiring more funding to grew Optibus’ product.

The world is becoming increasingly multimodal where urban transportation is concerned. People don’t strictly stick to public buses and taxicabs any longer, if they ever did to begin with — according to a 2013 study by the American Public Transportation Association, nearly 70% of millennials use a combination of car-sharing, bike-sharing, walking, subways, and light rail to get from place to place.

Optibus’ software attempts to account for this by providing recommendations to make cities’ transportation networks more passenger-friendly. It helps civil engineers to visualize geographic information while planning routes like the bike paths that riders may use on the way to or from public transit. Optibus also shows demographic data illustrating how route changes could affect residents’ access to public transit. And it handles workloads like generating bus timetables, rosters, and schedules that ostensibly cut costs while saving time. 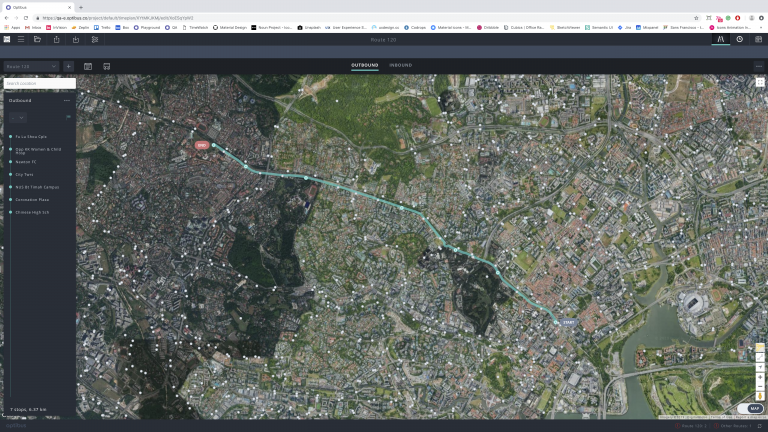 Above: The Optibus dashboard.

Optibus’ technology can also model constraints, operational preferences, and regulatory requirements across multiple vehicles, enabling fleet managers to explore what-if and worst-case scenarios in a simulated, centralized cloud environment. A dashboard lets operators define transit networks and set single or multiple routes, checkpoints, and other variables as they please. Moreover, they can view the projected impact on service and operating costs in real time and use AI algorithms to implement scheduling changes likely to increase on-time performance.

By one estimate, the global market for AI in transportation is expected to reach $3.5 billion dollars by 2023. Beyond contributing to a reduction in the amount of fuel consumed by vehicles and thus carbon emissions, AI can improve the passenger experience by aligning routes with peak time usages, bus stop popularity, and more. For example, a September 2020 pilot program by Dubai’s Roads and Transport Authority found that AI-powered bus routes resulted in a 30-day reduction in the wasted time for bus traffic by 13.3% through the routes subject to the test.

“Many people don’t realize just how complex a mathematical problem public transit poses. It’s actually one of the most complex types of mathematical problems, what’s known in computational complexity theory as NP-hard,” Haggiag told VentureBeat via email. “That’s why powerful algorithms are not just nice to have, but essential to quickly figuring out how to run the most efficient transit networks with the best service quality given all the constraints for the drivers and vehicles available for any given route on any given day at any given time, plus rules that a particular transportation provider needs to follow, like when and where drivers take their breaks or which depot a given vehicle needs to come from or return to.”

Optibus powers transit operations in over 450 cities around the world, including New York, Los Angeles, London, Melbourne, Brasilia, Hong Kong, and Singapore. Annual recurring revenues is up six times from 2018 and over double compared with 2020, according to Haggiag.

“We’re in this weird situation where machine learning has advanced so far and there’s so much data about where people are coming from and where they’re going, yet in many ways public transit is still stuck in this old-school space where spreadsheets, decades-old legacy software and even pen and paper is being used to try to address really complex mathematical problems,” Haggiag said. “By using algorithms and machine learning to optimize this data, and by using the distributed computing power of the cloud, we can create transportation networks that match the demand so much better and that make transit more accessible for billions of people around the globe.”

Existing investors including Verizon Ventures, Pitango, New Era Capital Partners, Dynamic Loop, and Blue Red Partners contributed to Optibus’ latest tranche. To date, the company, which has around 150 employees, has raised a total of $160 million in capital.