It took me a while to figure out what makes Pokemon Crown Zenith unique. Other special collection sets like Champion’s Path, Celebrations, and the Pokemon Go expansion all have a core theme, but Crown Zenith’s purpose isn’t entirely clear. On the surface it’s just another Sword & Shield era set filled with familiar card types like V, VSTAR, and Radiant Pokemon. There’s a Charizard V, Charizard VSTAR, and a Radiant Charizard here, which is likely enough to carry the whole set on its own. There’s also Zacian VSTAR, Zamazenta VSTAR, and Radiant Eternatus, which ties Crown Zenith back to the Sword & Shield base set and the Galarian era as a whole.

If Crown Zenith is meant to be a send off to Sword & Shield, I don’t quite see it. The sub-set here is the Galarian Gallery, a 70-card set that includes only two Pokemon from Galar. It does have quite a few Hisuian Pokemon, including gold versions of Origin Forme Dialga, Palkia, and Arceus, but it also features plenty of Pokemon that aren’t featured in either game. These kinds of themed expansions aren’t always as laser-focused as I would like, but this one seems especially scattered.

It might not be the perfect closing chapter of Sword & Shield I was hoping for, but the more time I spend with Crown Zenith, the more I’m charmed by it. One of the first things that caught my eye was the Signature Trainer Cards – Supporter Cards signed by the trainers and gym leaders they feature. There’s only a small handful, but each of them captures the personality of their trainer so perfectly. Raihan’s sharp lines were written with intensity, while Hop’s lazy scribbles convey his laid back attitude. Cute little surprises like this are what keep Pokemon cards interesting.

While the selection of Pokemon in the Galarian Gallery feels like a bit of a grab bag, there’s a cohesion to the artwork that ties them all together well. While there are many different styles and artists represented, the Galarian Gallery is altogether the most stunning collection of Pokemon artwork ever featured in the TCG. Each full art card is more beautiful than the last, and the entire collection is just begging to be framed and hung on the wall. Some of the highlights include an eye-popping Keldeo beneath the Northern Lights, a watercolor Hisuian Zoroark, a Mewtwo VSTAR that mirrors a fight with Charizard seen in a promo card from the S&S Ultra-Premium Collection, and the aforementioned Gold Arceus, Dialga, and Palkia that fit together as a triptych, with Gold Giratina VSTAR floating beneath them in the Distortion World. I’m also particularly fond of the Latias featured in its native Pokemon movie home city of Alto Mare. If only every Pokemon card could be as beautiful as the cards in the Galarian Gallery. 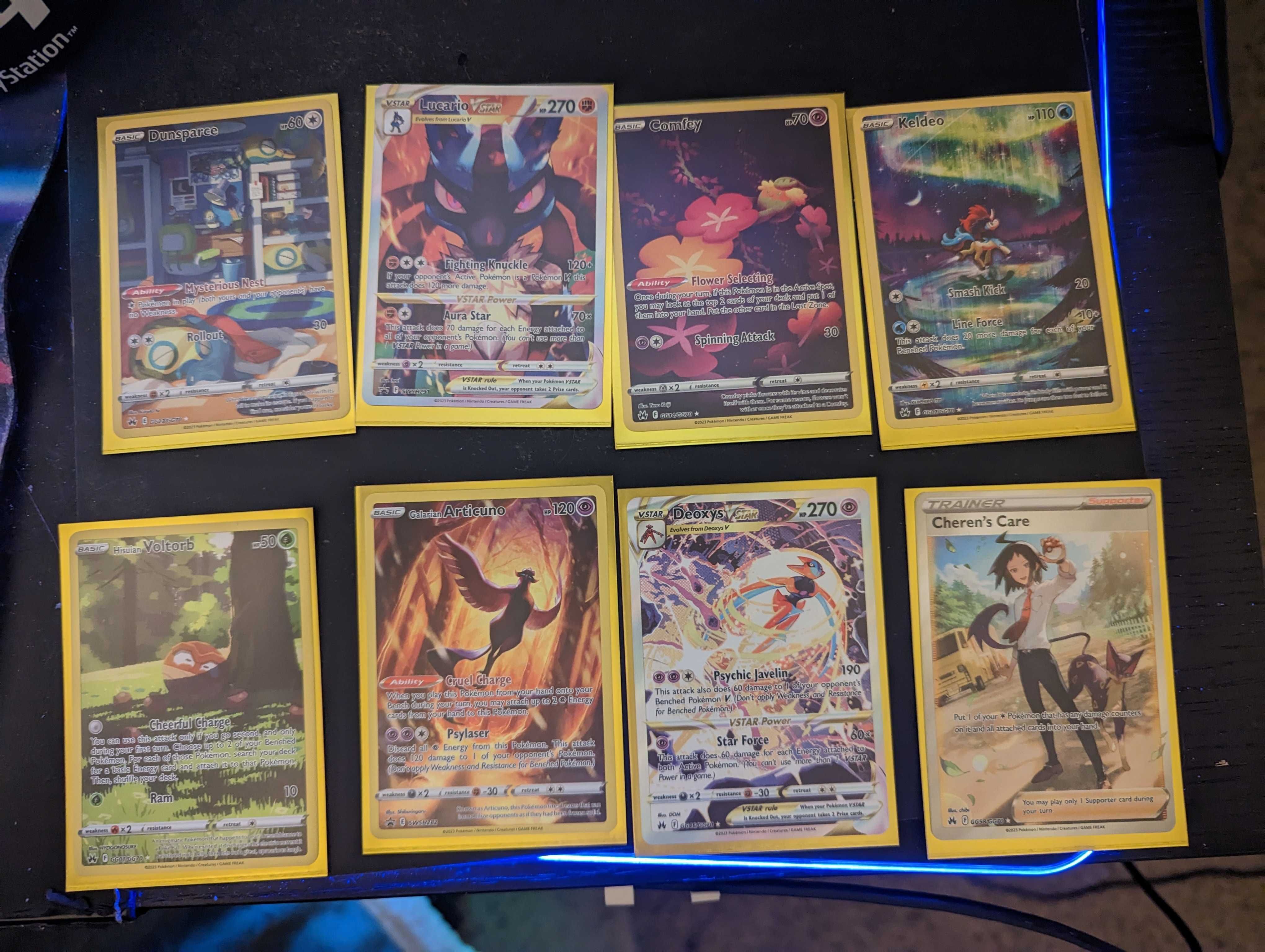 With the Scarlet & Violet Base Set on the horizon, it's hard not to think about the next era while opening Crown Zenith. One of the big changes coming in the next generation is a swap from yellow borders to the Japanese standard silver borders, and the Galarian Gallery gives us just a taste of that change. While all of the V, VStar, and VMAX cards have gray or silver borders, the regular Galarian Gallery full art cards are still yellow, which look especially ugly when you can directly compare the two.

There’s also a better chance at finding exciting pulls in Crown Zenith thanks to the Galarian Gallery. Because the subset takes up the reverse holo slot, you have twice as many chances to find a rare card, and occasionally you might even find two – one Galarian Gallery card and one rare card from the main set. Unfortunately, it’s a lot more common to find nothing at all. I opened a total of 18 packs from three different products and ended with 14 Galarian Gallery and ultra rare cards, including promos. That’s a great hit rate, but most of that came from an extra-stuffed Elite Trainer Box. In my Regieleki V collection, which comes with a promo and jumbo Regieleki V, as well as four booster packs, I didn’t pull a single rare card. Scarlet & Violet will help smooth out those highs and lows by guaranteeing at least three holographic cards in each pack. Crown Zenith gives just a taste of what Scarlet & Violet will be like, but I can’t wait to see how those changes affect the quality of packs in the new era.

Crown Zenith isn’t a perfectly themed special collection, but then,very few of them are. It doesn’t succeed at being the perfect send off to Sword & Shield, but it’s still a wonderful showcase of the kind of brilliant Pokemon artwork that only the TCG can offer. With its Galarian Gallery, it also gives players a taste of what’s to come in Scarlet & Violet. It might not be the most memorable expansion in PTCG’s long history, but it still feels like the right set at the right time.

Zelda: Ocarina Of Time remake in Unreal Engine 5 looks a lot like The Witcher

PS Plus May 2022 free games, release time, leaks and predictions for PS fans

The Best Games That Use Shadows Creatively