The latest report from CloudBolt signals that the industry has reached a critical inflection point in the evolution of cloud.

The data suggest that multicloud, multitool environments have outgrown the tools and platforms that IT leaders currently rely on. Seventy-six percent of respondents agreed with that their company is hitting a wall while using their existing programs and tools to achieve cloud objectives, while 16% neither agreed nor disagreed. That means just 8% of respondents could say with certainty that they’re getting the value they need from cloud, and that their cloud infrastructure will keep them sufficiently competitive for the foreseeable future.

So, what is creating this wall and preventing optimal returns on cloud investment? 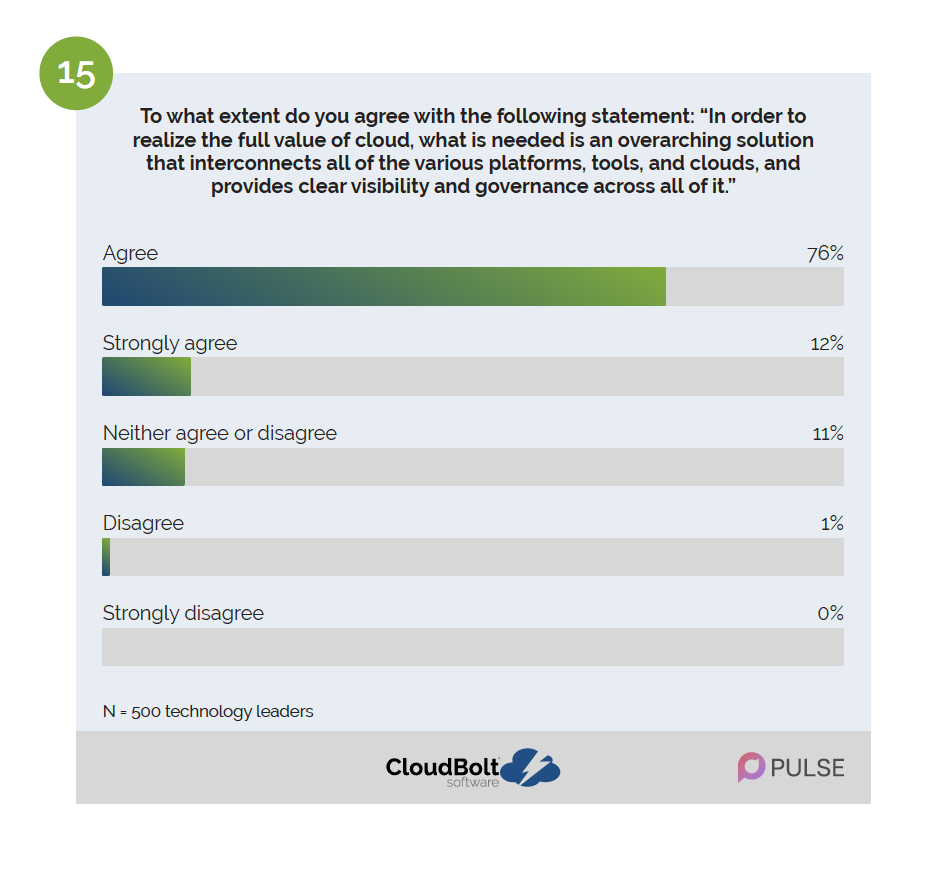 Multicloud environments have grown increasingly complex and unwieldy, and there is no comprehensive visibility. As islands of automation, siloed developer teams, tools sprawl and shadow IT proliferate, visibility is further diminished. All across the organization, the left hand is unable to know what the right is doing.

When posed with the following statement — “My company struggles to achieve comprehensive visibility into cloud usage and spend across all resources, clouds and tools” — 74% agreed, while 16% neither agreed nor disagreed. That means only 10% of IT leaders were satisfied with the visibility they had into their cloud architectures.

Visibility is key to efficiency. You can’t track, govern or optimize what you can’t see. As disparate groups of developers with their own tools and preferences work in their own siloes, without knowing what other groups are doing, what tools they’re using, or what best practices they’re adopting, business performance is affected across the board, and costs spiral out of control.

Adding more platforms and tools in a patchwork approach to keep up with new cloud demands won’t get companies beyond the wall. Without the overarching framework 88% of IT leaders say they need, costs will keep rising and innovation will stall.

For its report, CloudBolt surveyed over 500 senior IT, devops, secops and finops leaders from large enterprises worldwide.

Read the full report by CloudBolt.

VentureBeat’s mission is to be a digital town square for technical decision-makers to gain knowledge about transformative enterprise technology and transact. Learn More