According to Kasada’s “2021 State of Bot Migration report,” most companies (83%) surveyed experienced at least one bot attack in the last year, resulting in loss of revenue and increased operational costs. Of those, 77% lost 6% or more of their revenue due to bot attacks, and 39% reported a revenue loss of 10% or more. 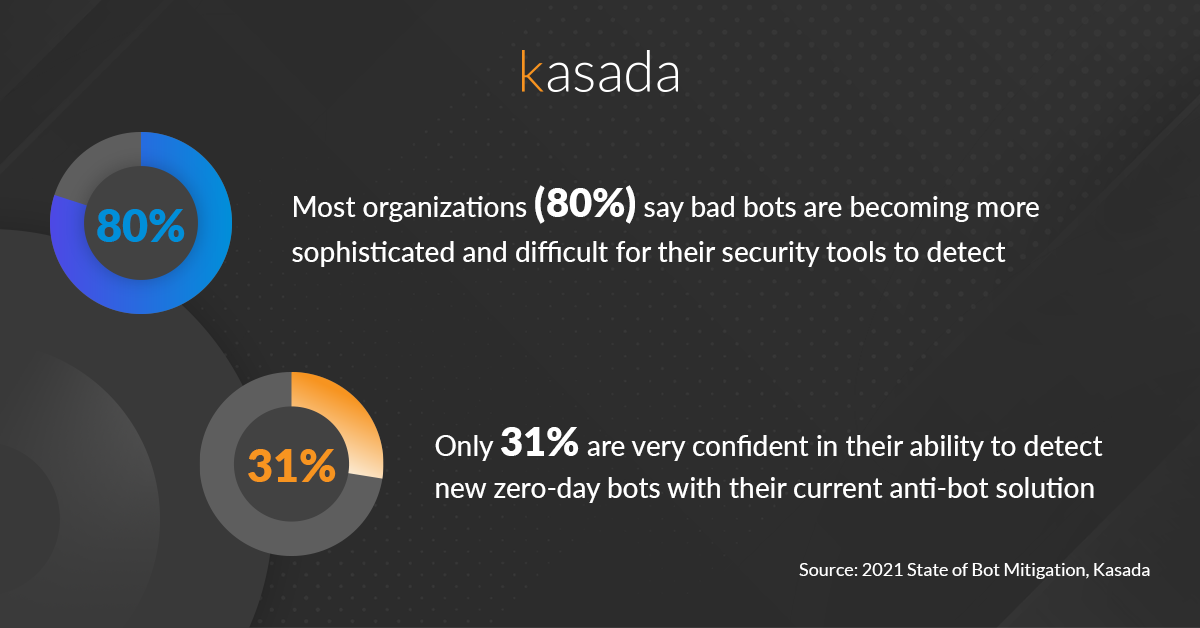 Bot attacks are increasing in sophistication, which 80% of companies agree is making detection more difficult. As Kasada’s report found, 85% of companies have had trouble stopping bad bots, as their existing solutions became ineffective a year after initial deployment. The most important finding of this research is that companies are still losing large amounts of revenue due to bad bots, despite their investment in dedicated anti-bot solutions.

Those responsible for preventing bot attacks often report feeling overwhelmed at their inability to keep up with how fast they evolve. With attackers regularly adopting new tools or changing their methods of attack, only 31% were very confident in their solution’s ability to detect new zero-day bots never seen before. In fact, 76% said they were either playing a game of cat and mouse with attackers or feel like bot mitigation has become an impossible balancing act.

By evading detection and mitigation efforts, bots are having a measurable impact on companies’ bottom lines. One in four say that just a single bot attack costs their company an average of $500,000. The most surprising takeaway from this survey is how much money is spent on management and remediation, each of which cost almost as much as the anti-bot solution itself. For example, 77% spent $250,000 or more just to maintain their current solution.

It’s more important than ever before to be proactive when it comes to preventing bot attacks, so they don’t disrupt your profitability. Companies say bot attacks result in website downtime, brand damage, higher infrastructure costs, and a poor customer experience. This explains why a majority of respondents (87%) believe effective bot mitigation is a competitive advantage.

An independent research firm surveyed information technology decision makers from more than 200 companies of more than 250 employees each. Those surveyed said they or their team were responsible for managing and/or mitigating bots and confirmed their company’s use of a dedicated anti-bot solution.

Read the full report by Kasada.

Brink Offers Some Of VR's Best Travel Content Yet

Fallout 4: How To Find The Railroad Headquarters

QuakeCon At Home: How To Watch And Full Schedule

Tales From The Loop Is An Awesome TV Show, And An Equally Great Role-Playing Game