SiFive today announced it is creating a platform for Linux-based personal computers based on RISC-V processors. Assuming customers adopt the processors and use them in PCs, the move might be part of a plan to create Linux-based PCs that use royalty-free processors. This could be seen as a challenge to computers based on designs from Intel, Advanced Micro Devices, Apple, or Arm, but giants of the industry don’t have to cower just yet.

The San Mateo, California-based company unveiled HiFive Unmatched, a development design for a Linux-based PC that uses its RISC-V processors. At the moment, these development PCs are early alternatives, most likely targeted at hobbyists and engineers who may snap them up when they become available in the fourth quarter for $665.

SiFive CTO Yunsup Lee spoke about the new development at the online Linley Fall Processor Conference being held today. Lee explained that the company’s HiFive Unmatched development boards allow RISC-V developers to create the software they need for their platforms. SiFive designs processors that can be customized for products ranging from the low end to the high end of the computing spectrum. These processors are based on RISC-V, a free and open architecture created by university researchers a decade ago.

The announcement is sure to cause some speculation. While it’s still early days, it’s not inconceivable that RISC-V processors could someday be alternatives to Intel-based PCs and PC processors. The RISC-V organization is run by an industrywide body of supporters that includes SiFive. In fact, RISC-V’s founders are all working for SiFive in some fashion.

SiFive raised $61 million in August from investors that included chip superpowers Intel and Qualcomm. The startup has raised $190 million to date, and former Qualcomm executive Patrick Little recently joined SiFive as CEO. His task will be to establish the company’s RISC-V processors as an alternative to Arm. This move comes in the wake of Nvidia’s $40 billion acquisition of the world’s leading processor architecture.

If Little is also looking to challenge Intel and AMD in PCs, he’ll have his work cut out for him. For starters, SiFive is currently focused on Linux-based PCs, not Microsoft Windows PCs. Secondly, SiFive wouldn’t build these processors or computers on its own. Its customers — anyone brave enough to take on the PC giants — would have to do that.

“It would be hard to imagine anybody overtly [taking on Intel and other PC makers],” Linkley Group senior analyst Aakash Jani said in an interview with VentureBeat. “You may see companies in stealth mode try to do this. But the biggest [impediment] is the software ecosystem. It took a long time for anybody to even develop for Arm’s architecture, and now they have an x86 emulator. But the same software support doesn’t exist for the RISC-V platform currently. If anyone were to take on the giants of x86 and Arm, they would have to really go develop the software ecosystem.” 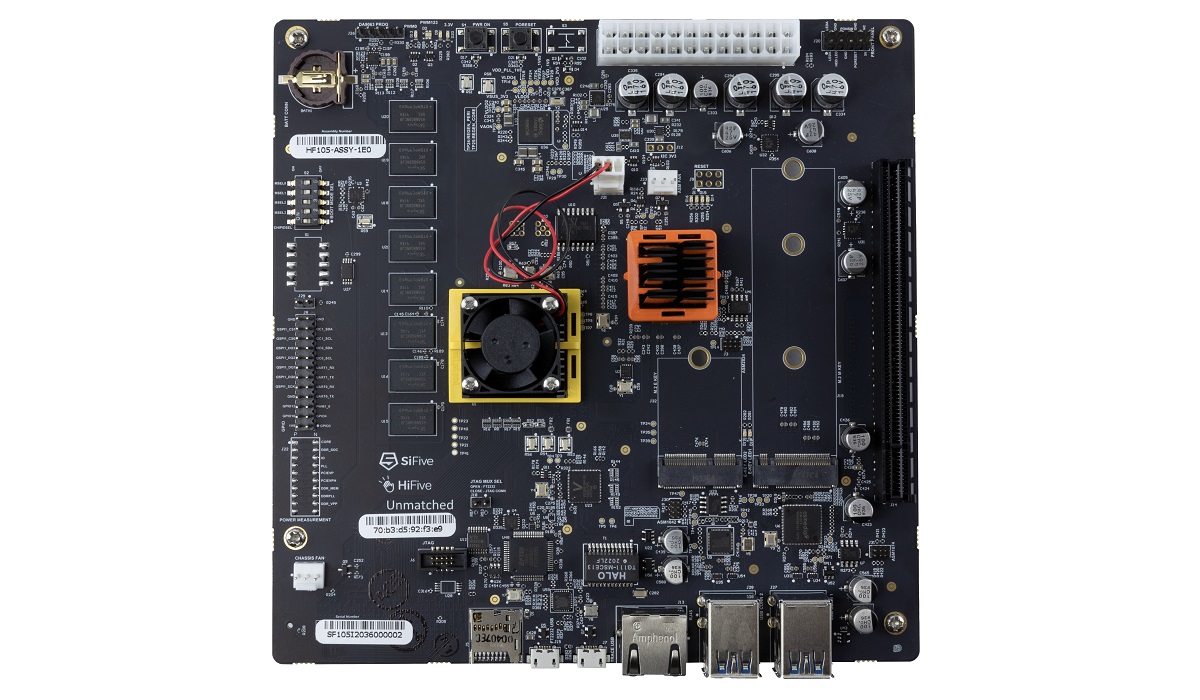 Above: SiFive’s HiFive development board for Linux PCs.

Developers can use the boards to test code for real-time operating systems, custom Linux distributions, compilers, libraries, and applications.

The SiFive HiFive Unmatched board will have a SiFive processor, dubbed the SiFive FU740 SoC, a 5-core processor with four SiFive U74 cores and one SiFive S7 core. The U-series cores are Linux-based 64-bit application processor cores based on RISC-V. These cores can be mixed and matched with other SiFive cores, such as the SiFive FU740. These components are all leveraging SiFive’s existing intellectual property portfolio, Jani said.

“I wouldn’t see this as SiFive moving out of the box. It’s more like they’re expanding their box,” Jani said. “They’re using their core architecture to enable other chip designers to build PCs, or whatever they plan to build.”

The HiFive Unmatched board includes 8GB of DDR4 memory, 32MB of QSPI flash memory, and a microSD card slot on the motherboard. For debugging and monitoring, developers can access the console output of the board through the built-in microUSB type-B connector. Developers can expand it using PCI-Express slots, including both a PCIe general-purpose slot (PCIe Gen 3 x8) for graphics, FPGAs, or other accelerators and M.2 slots for NVME storage (PCIe Gen 3 x4) and Wi-Fi/Bluetooth modules (PCIe Gen 3 x1). There are four USB 3.2 Gen 1 type-A ports on the rear, next to the Gigabit Ethernet port, making it easy to connect peripherals.

The system will ship with a bootable SD card that includes Linux and popular system developer packages, with updates available for download from SiFive.com. It will be available for preorders soon.

Xbox Series X And S Preorder Info: Where To Preorder, Price, And More