I consider myself to be a pretty mid-tier Sonic fan. I’ll play everything the blue blur is in, know a fair bit about the lore, and listen to the excellent soundtracks on repeat, but I won’t go as far as creating my own OC. I’ll leave that to news editor and Sonic superfan Rhiannon Bevan.

The main reason why I won’t give my heart and soul to the series is that recent Sonic games just aren’t very good, are they? Joke all you want about Sonic having had a rough transition into 3D but, bar some gems like Generations and Mania, almost everything the blue blur has touched is of such varying quality that it’s hard to get into. 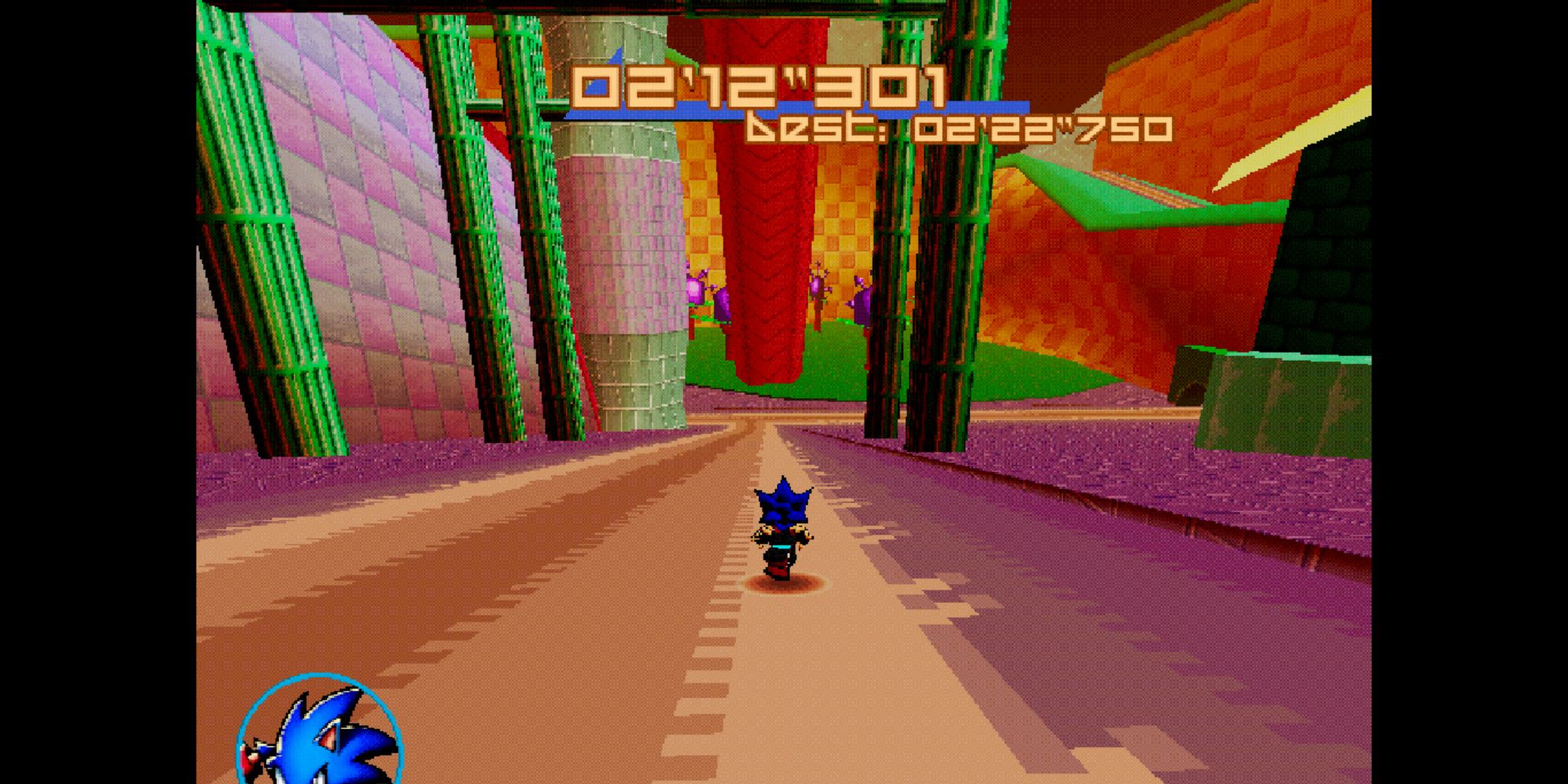 Although the long development time for Sonic Frontiers has me hopeful that it’ll push the hedgehog out of the 5/10 lane, I honestly haven’t cared about it since January, when I first laid eyes on the fan-made Sonic Storm, a game being made by a small team of fans that evokes Jet Set Radio and turns Sonic away from linear platforming to open areas that let the player choose how best to speed through them.

Up until last month, I’ve only had a Chromebook that struggled to run Twitter, so playing Sonic Storm felt like a pipe dream until I upgraded. After finally doing just that, the Sonic Storm demo was the first thing I went to try and my god does this need to be an official thing. This is exactly the direction Sonic should have been going in since he jumped into the third dimension.

The most recent demo is known as the Time Trial Testfire and tasks players with trying to reach the end of the level as quickly as possible. Unlike other Sonic games, Storm is played entirely from a third-person perspective and has Sonic running around more open 3D areas, rather than the mostly side-scrolling linear levels we’re used to.

Sonic is all about movement and Storm nails that by giving the player a ton of options to quickly gain momentum and speed through the levels. Sonic has previously felt a little weird to control in 3D, but it works really well here thanks to how the level design accommodates the speed by giving the player plenty of room to move around, as well as the ability to parkour up walls, which really just puts the focus on moving forward as fast as possible. The closest comparison I can think of is Demon Turf, but if Demon Turf was suddenly given five Red Bulls and a kick up the pants.

I played through the demo multiple times and still kept finding new ways to shave off a few seconds, or finding an all-new route that took me in a completely different direction. Storm takes the best part of Sonic games, speeding through them, and makes it feel like a core part of the experience. As a time trial-focused level, I’m not sure if the whole of Storm is so closely focused on open areas and speed, but it feels like the best move forward for Sonic. 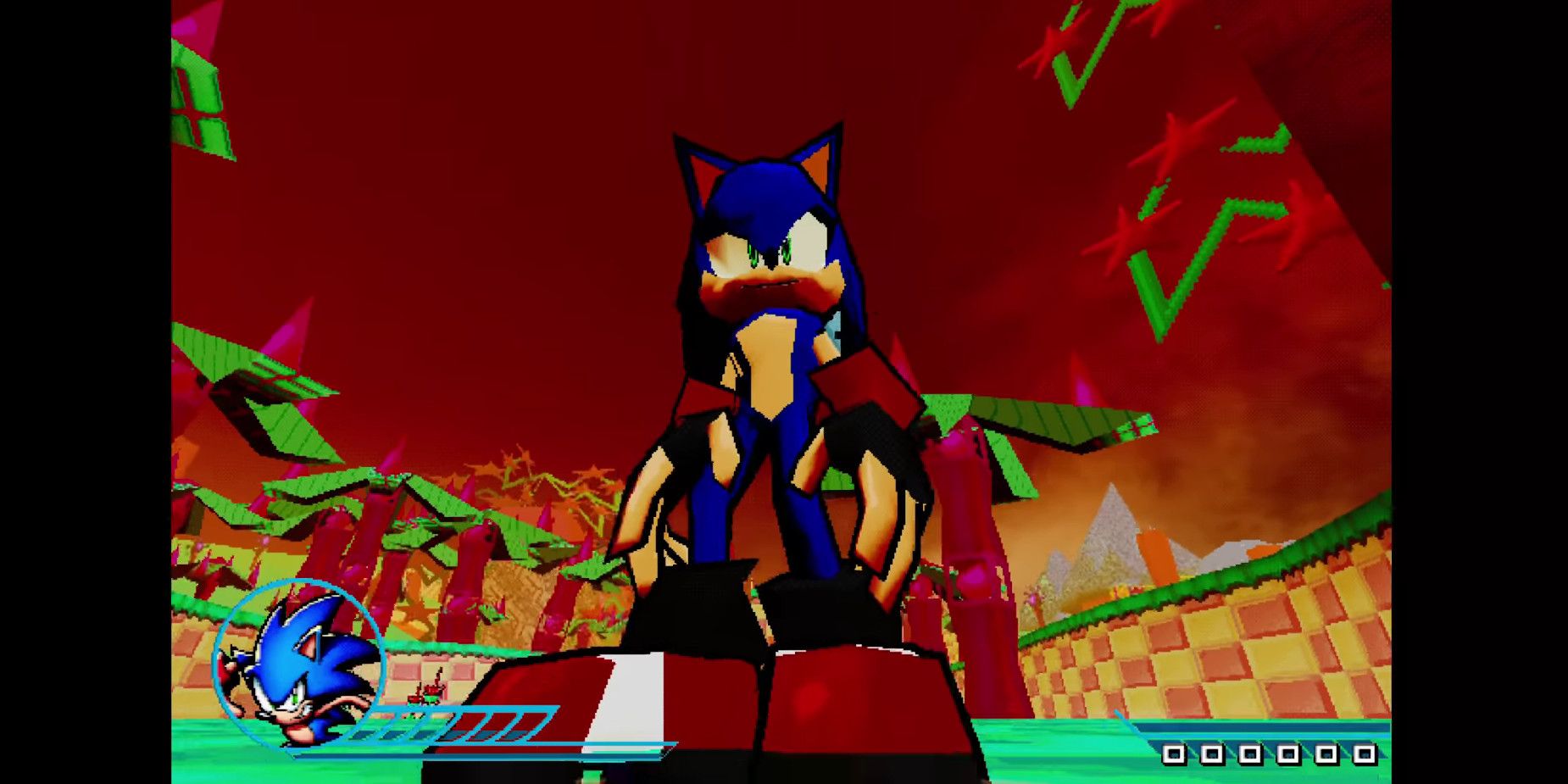 As you’re running around the level and trying to figure out the best path to take, you’re going to be blasted with some of the best music and visuals I’ve seen in a fan project. Storm looks and sounds like something you’d see on the PS1, with purposefully jaggy visuals and muffled sound that really sell the concept. The music is the standout though – the main track is one of the most “gotta go fast” songs I’ve heard in some time, filled with about a million different instruments all pushing you to speed along.

Although the Time Trial Testfire is the most recent demo, I also took a look back at the Dual Story demo that was released prior. This demo has you playing as Shadow through a more linear level high up on an airship in the sky. I liked it less than the testfire time trial, simply because it wasn’t as open-ended and doesn’t give you as much chance to mess around with the mechanics. It feels much more like a proof of concept and a showcase of how Storm looks and sounds than it does a slice of the game.

More than anything, I was impressed at how far Sonic Storm has come between these two demos. The presentation has seen a massive upgrade, the controls are far less slippery (and actually support controllers, thank god), and it’s clear that the vision for the game has really been nailed down with the testfire. The music still absolutely slaps, though.

The minor issues I had with Sonic Storm like the occasionally imprecise homing attack and sticky camera feel like things that could be polished out if Sega chucked a big bag of “make this official” money like it did with Sonic Mania. Will that ever happen? Considering how well Sonic is doing at the moment I doubt Sega would feel the need, but at the very least it lets these sorts of projects even exist.

I’m sure Sonic Frontiers is going to be exactly what some fans have been wanting from the series when it launches later this year – and I’m happy for them – but I’ll just be sitting here tapping my foot impatiently, waiting for more Sonic Storm.

Nier Replicant: How To Grow The Lunar Tear Legendary Flower

Resident Evil Village Has Completely Sold Me On HDR

Official Xbox Mini Fridge Will Be Available For All This Holiday, "Xbox And Chill"