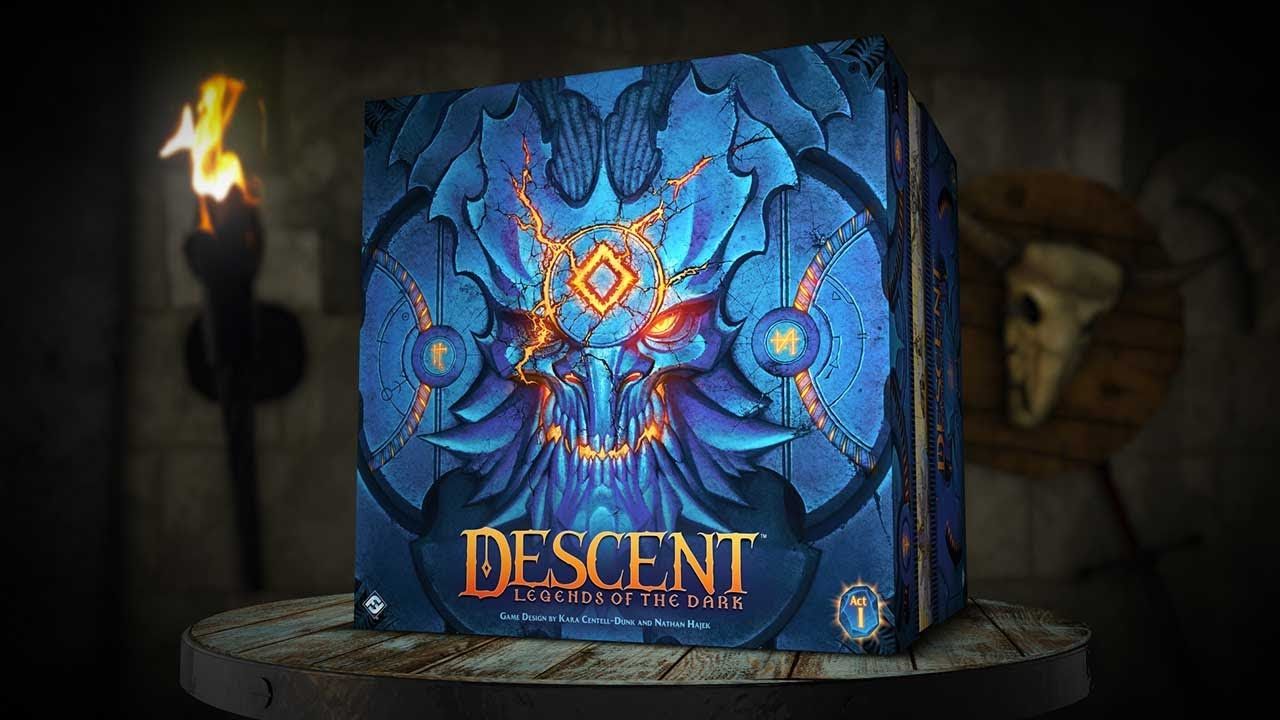 GameCentral takes a look at some of the biggest new tabletop games of the year, including the Vampire: The Masquerade Rivals and Age Of Sigma: Dominion.

There might not have been any E3 again this year but GenCon, the tabletop equivalent, is going ahead this September in its usual home of Indianapolis, USA. Most UK gamers are unlikely to get the chance to attend but there was an alternative at the recent UK Games Expo at the Birmingham NEC.

Notable highlights of the show included the chance to play the new 3D physical version of Catan, which at £300 might seem like it’d only be for high rollers but is destined to be part of every board gamer’s secret wishlist.

There was also a world exclusive playthrough of the upcoming dungeon crawler Descent: Legends Of The Dark, that when released later this month will be a must buy and a highlight of the year for many.

As with video games, the pandemic has thrown publisher schedules to the wind, creating numerous uncertainties and delays. For tabletop games though this has had the unexpected benefit of turning the summer – when there’s usually not much being released – into an unusually busy period, so as the British weather does its best to keep us all indoors, we’ve taken a look at some of the most interesting recent releases.

Warhammer Age of Sigmar: Dominion is a huge boxed set of fantasy battle miniatures released last month for the launch of Age of Sigmar 3rd Edition. The tight new rules come in a beautifully illustrated core rule book and make it a must have for fans of Warhammer’s fantasy universe. Most of the book is dedicated to the lore of Age of Sigmar, so it’s also a great introduction to the franchise. With two new armies totalling 60 miniatures, plus related stat cards, this is a hefty package that justifies its equally hefty price.

The miniatures in the box are stunning, with Stormcast Eternals looking like Greek gods and suitably sinister Orruk models that make the future of Age of Sigmar seem very exciting. If you’re feeling flush, the new Extremis starter set also contains enough terrain to turn your kitchen into the ultimate epic battle zone between good and evil.

Adventures in the Forgotten Realms – Magic: The Gathering

Wizard of the Coast are having their best financial year ever, so buoyed by this success this crossover between Dungeons & Dragons and Magic: The Gathering gives players the best of both worlds. The set comes with 327 cards and lets Magic players explore a brand-new world for the first time.

It’s a pick ‘n’ mix of Dungeons & Dragon’s best bits and an accessible entry point to both franchises. The best new mechanic is venturing into the dungeon and being able to progress through rooms, but just watch out for Old Gnawbone the much-loved stompy green dragon. It feels very comforting to play familiar characters and cast classic spells, but D&D is all about creating your own story and these cards are a great bite-sized introduction for those who want to know more about the lore.

Parks: The Board Game

Summer holidays mean getting out and about in nature, and while it’s probably best to commit to a staycation, Parks is a homage to the 59 US national parks and their outstanding scenery. This is one of the best-looking games around, with its stunning art deco aesthetic, and would look just as good on your coffee table as your gaming shelf.

Gameplay involves trekking through different trails across all four seasons of the year, collecting memories of them as you go. These memories are represented by various resource tokens, like mountains and forests, and you can also collect canteens and take photographs for points on each of the four hikes that make up the game.

Have fun blocking your family from highly coveted tiles by camping on the best spaces and, just like any beauty spot, the more players involved the more the game turns from rural retreat to sun lounger fist fight. The perfect accessible campervan game, Parks has outstanding production quality – so you don’t have to worry about it getting left out in the rain.

Brew’s cute comic style aesthetic belies the trouble that’s brewing in the forest: time is out of whack and each of the seasons exist all at once, creating a beautiful kind of chaos. Players are the mystics of the forest and need to tame extraordinary woodland creatures and use their magic to bring back balance. Use elemental dice, recruit woodland creatures, and brew potions which will help you win die rolls to get nature back on an even keel.

After the fourth round, the game is over and players count up their points. Points are earned from forests, released creatures, brewed potions, VP tokens, and leftover ingredients, and the player with the highest score is the winner.

While some may not have enjoyed Pokémon Go Fest, there’s plenty to get excited about in the trading card game, as pokémon of the frozen lands come to the table. Catching Pachirisu the ice squirrel can involve a significant trek in Pokémon Go but it’s all a bit easier when you’re just opening a booster pack.

The stunning card art makes the most of the winterly theme and depicts howling blizzards while introducing new strategies and powers for trainers to explore. This expansion has eight pokémon VMAX, including Sandaconda with Gigantamax form, Blaziken, and Celebi. This expansion looks like it could dethrone Vivid Voltage as the best Sword & Shield expansion set so far.

The Cold War may seem like ancient history to some people but taking on the role of a CIA agent investigating the mysterious death of an American citizen in Vienna is a tense and entertaining setting for a board game. Transported back to 1977, players travel around Europe visiting a dozen destinations and discovering secrets.

You must manage resources and colourful characters such as your informants, who are usually open to a bribe for some useful information. This game will scratch your detective itch and make for a brain busting evening as you decode reports. Remember: trust no one, it’s the only way to outsmart the enemy. Information gleaned from secret messages and wiretapped conversations early on in the game become vital to how the story progresses and concludes later on, which is really clever.

Missing Loki’s adventures with the TVA already? Don’t worry, The Loop has you covered, with plenty of humorous temporal shenanigans. It’s a quirky co-operative game where players battle the evil Dr. Foo. It’s filled with wacky visuals from Pandasurus Games, whose style is reminiscent of old school 2000 AD.

You play as a Temporal Agent and need to gather powerful artefacts while jumping through time, to sabotage the doctor’s terrifying time machine. The Loop is also a description of how the board game is designed, as time is made into a literal flat circle. Make the most of multiplying your cards and watch out for Dr. Foo’s dodgy duplicates.

Godtear is rightly loved for its fast-paced gameplay, with almost no downtime in this two-player miniatures skirmish game. It dispenses with the massive hardcover codexes of Warhammer, so there’s no need to bring your tape measure to play this game. Simple mechanics and the constant release of Warband expansions make for exciting new battles and strategies.

In this latest expansion powerful necromancer and master of death Styx, Lord of Hounds brings some canine chaos to the gaming table, as he’s accompanied by a pair of slavering Abyssal Hounds. Styx bends the rules of death, weakening his foes enough for his hounds to make mincemeat of anyone.

Goths need summer games too and Vampire: The Masquerade Rivals transports players to San Francisco, where they take charge of a vampire coven and clash with rival vampire gangs who control mortals and have political influence during the twilight hours. The lore and clans carry over from the role-playing game, including fan favourite vampire punks the Brujah – although you can also choose from the Ventrue, Toreador, and Malkavian.

Although the mechanics sometimes stifle the story, and replayability is dependent on purchasing decks for additional territory and clans, this is still an elegant and compelling game. New challenges and objectives are revealed at the beginning of each player’s turn and you get two actions to try and stake (pun fully intended) your claim. Defeat your rival clans or gain 13 Agenda Points to win the game.

Oath is about empire and how you tell the story of the rise and fall of those who would rule the land. You have the choice to try and bolster the power of the chancellor or scheme to bring the kingdom crashing down. One of the players starts as the chancellor and the other players are exiles trying to make their mark. Players move between three regions: the Cradle of Power, its outlying provinces, and the Hinterlands to interact with the citizens of the land and establish a power base.

While the basic mechanics of the game are easy to pick up this is a long and complex game, but you’ll feel engrossed in the scheming and politics as the hours tick by. Your choices feel powerful and can even change the final victory mechanic as you strategise to pledge and break alliances.

Red Faction Guerrilla Switch Review: Get your ass to Mars

How to watch the NBA 2K20 tournament quarterfinals on ESPN

Theta Legion VR Is Coming To Oculus Quest This Summer