“Let me tell you, let me give everybody a little something. In life, you can’t keep going around cutting corners,” Katy Kat, the cat lead singer of the band Milkcan, belts out to a sea of adoring 2D fans. Mouse Ma-chan provides the groovy rhythm on the drums, while lamb Lammy jams out on her wooden guitar, stage diving into the crowd as Chop Chop Master Onion smiles proudly. If you have no idea what I am talking about, you are not alone. This is the final level in UmmJammer Lammy, the PaRappa the Rapper spinoff that nobody seems to remember.

Developed by NanaOn-Sha and published by Sony in 1996, PaRappa the Rapper instantly took the world by storm as the first modern rhythm game. The game was one of Sony’s top selling titles and even had its own anime. People who have never even played it still recognize the rapping little yellow dog with the orange beanie and his onion-headed mentor. It’s arguably one of the most iconic rhythm games of all time – some would even go so far as to call it the king of the genre.

As is customary with royalty, an heir must be born. That heir came in the form of an anthropomorphic bashful lamb who says “ummmm” often and loves to shred on the guitar. UmmJammer Lammy was released in 1999 on PlayStation. I recently streamed it online to an overwhelming response of “what is this!?”, which is understandable. There aren’t many articles on UmmJammer Lammy. You would be hard pressed to stumble across any merch. And yet, I remember this game fondly.

I received UmmJammer Lammy as a birthday/Christmas gift that I shared with my brother. My birthday is December 22 and my brother’s is December 17, which are both way too close to Christmas for financial comfort. So, my father would always surprise us with a gift to share and this particular year, it was a PlayStation 2 and several games, one of those being UmmJammer Lammy. 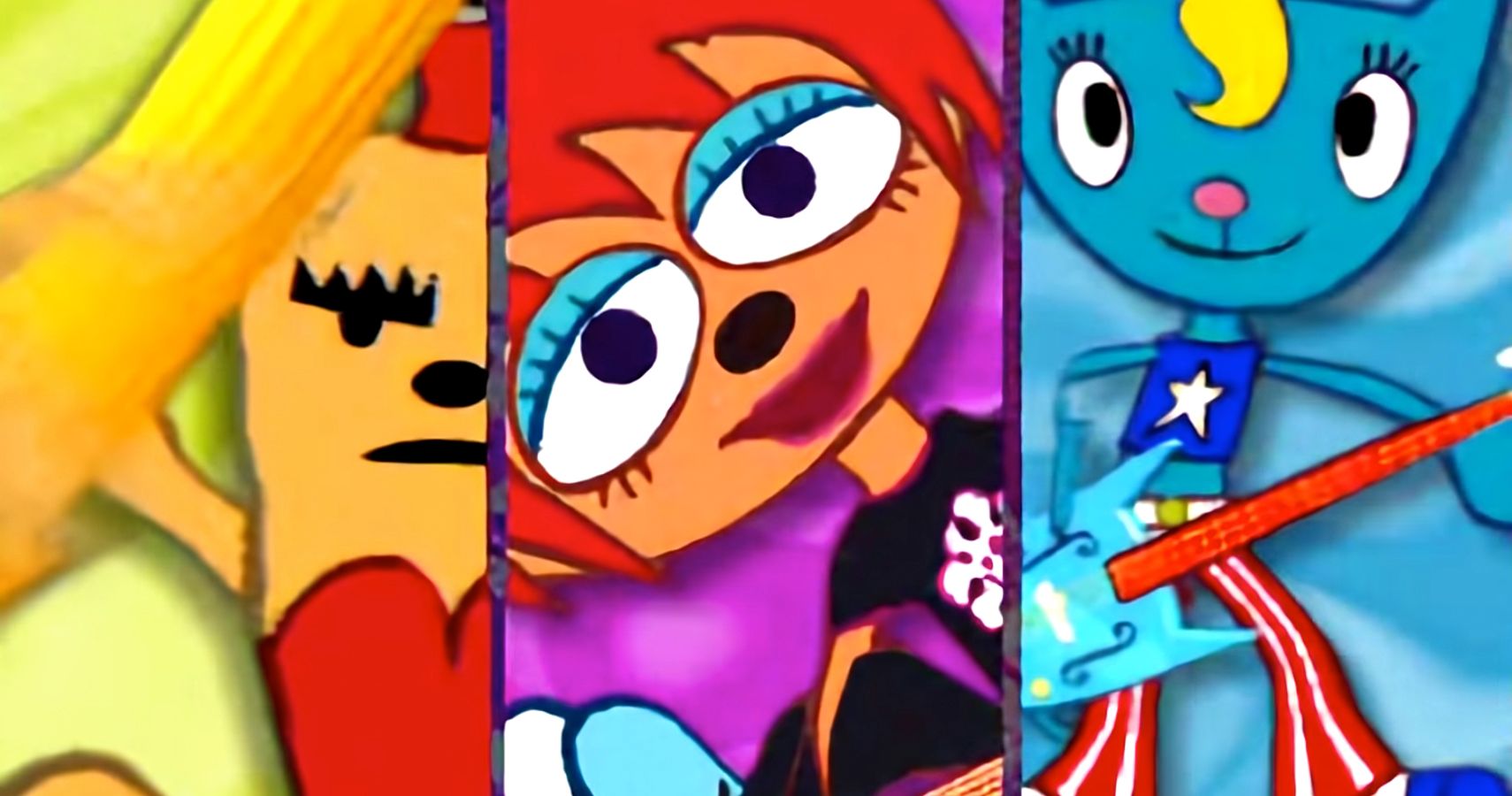 Umm-Jammer-Lammy!? I had never heard of it, which was weird seeing as I virtually lived in the gaming section of Blockbuster. Wow, I’m old. I examined the cover, which was pretty unassuming. But when I put the game in, it was a whole other story. I was instantly hit with a barrage of psychedelic colors and goofy characters. My ears became engulfed in guitar riff after guitar riff. It felt like I was playing around inside Jimi Hendrix’s mind, but with an adorable lamb. I was hooked.

However, no matter how much I romanticize the memories of the game, it’s not without its faults. The story is incoherent and just outright bad. It begins with Lammy playing with Chop Chop Master Onion at a concert with her band, Milkcan. The rapping onion assures the self-conscious lamb that playing is “all in the mind,” giving Lammy the confidence to play her heart out. The assurance is short-lived, as the whole ordeal turns out to be a dream and she had been playing with a vacuum cleaner. She wakes up, grabs her clock, and realizes that she only has 15 minutes before her first real concert with Milkcan.

She rushes down the stairs of her apartment complex and dashes through the streets. She’s then abruptly stopped by a dog fire chief, Chief Puddle, who asks her to help put out the fire that is raging in the building in front of them. She exclaims “I don’t have time,” but the pooch is persistent. As she begins to feel distressed, she sees her shallot-esque sensei in her mind and begins to imagine the firehose as a guitar. She yells out “Leave it to Lammy!”, and then helps put out the fire, as Puddle and the neighbors watch on, singing and dancing among the flames. 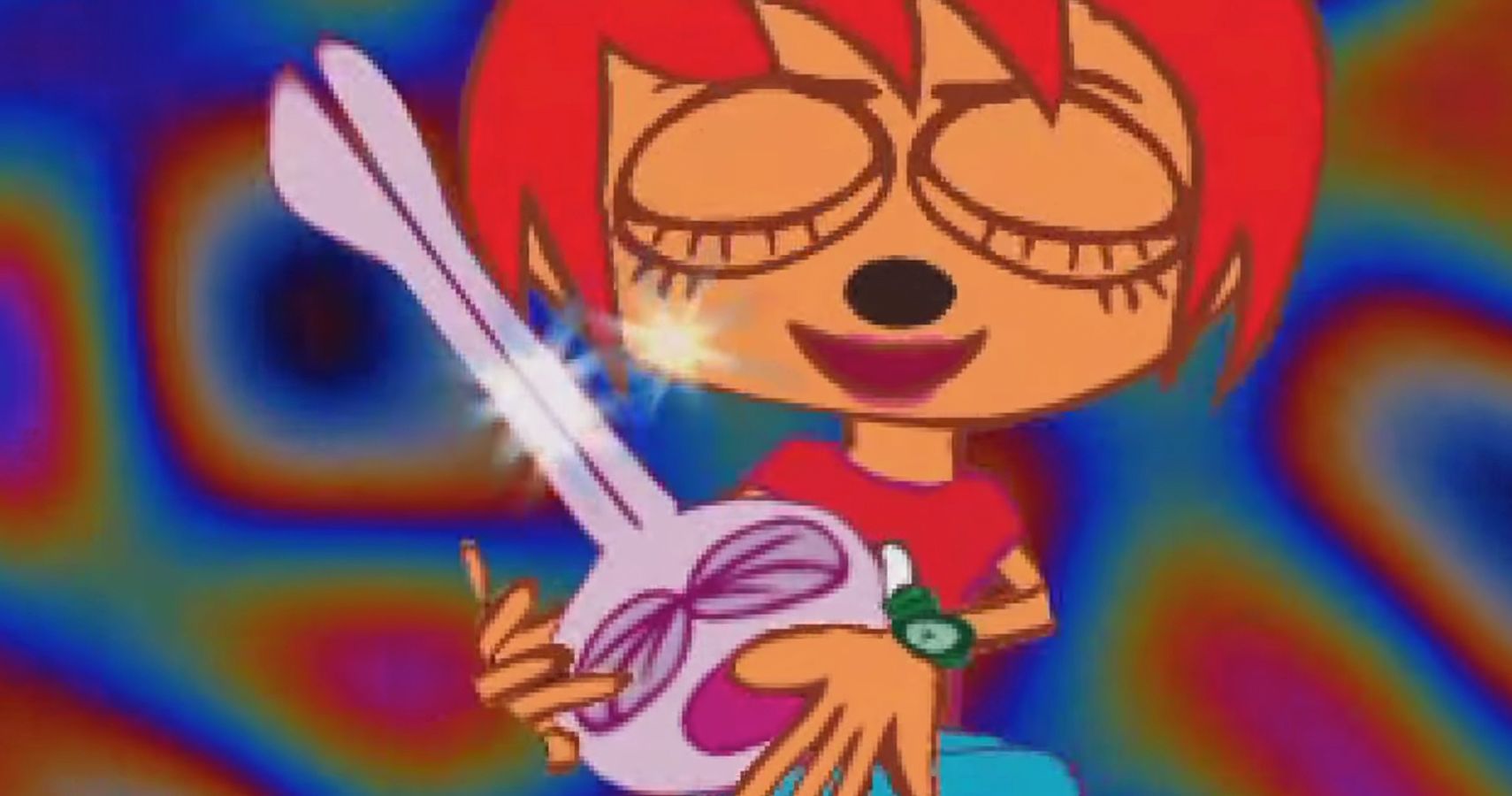 The game continues in this fashion as each level gradually becomes more difficult – and more ridiculous. Lammy is mistaken for being pregnant by a caterpillar nurse and uses a baby as a guitar, flies a plane with a pilot who has split personalities, makes a guitar out of wood with a carpenter beaver, dies and must perform in the netherworld with an alien idol singer (although in the American version, her belt gets caught and she is catapulted back in time and onto an island). She eventually even meets her evil twin Rammy, before finally going on to perform at the concert with Milkcan. There is also a side story players can unlock that features PaRappa the Rapper. Remember this all happens in less than 15 minutes.

Despite its absurdity, as well as the flak it received from players and critics alike, UmmJammer Lammy received a lot of praise and even won two E3 Game Critics Awards back in 1999. It may seem inconceivable that a game with this asinine of a story would win any awards, although I think E3 saw in this game what I saw in it. It’s fun. It is just pure quirky, colorful, unadulterated fun.

It saddens me that the element of fun is seemingly becoming more and more lost in the conversation when discussing games. Does the element of joy no longer come along with joysticks?! 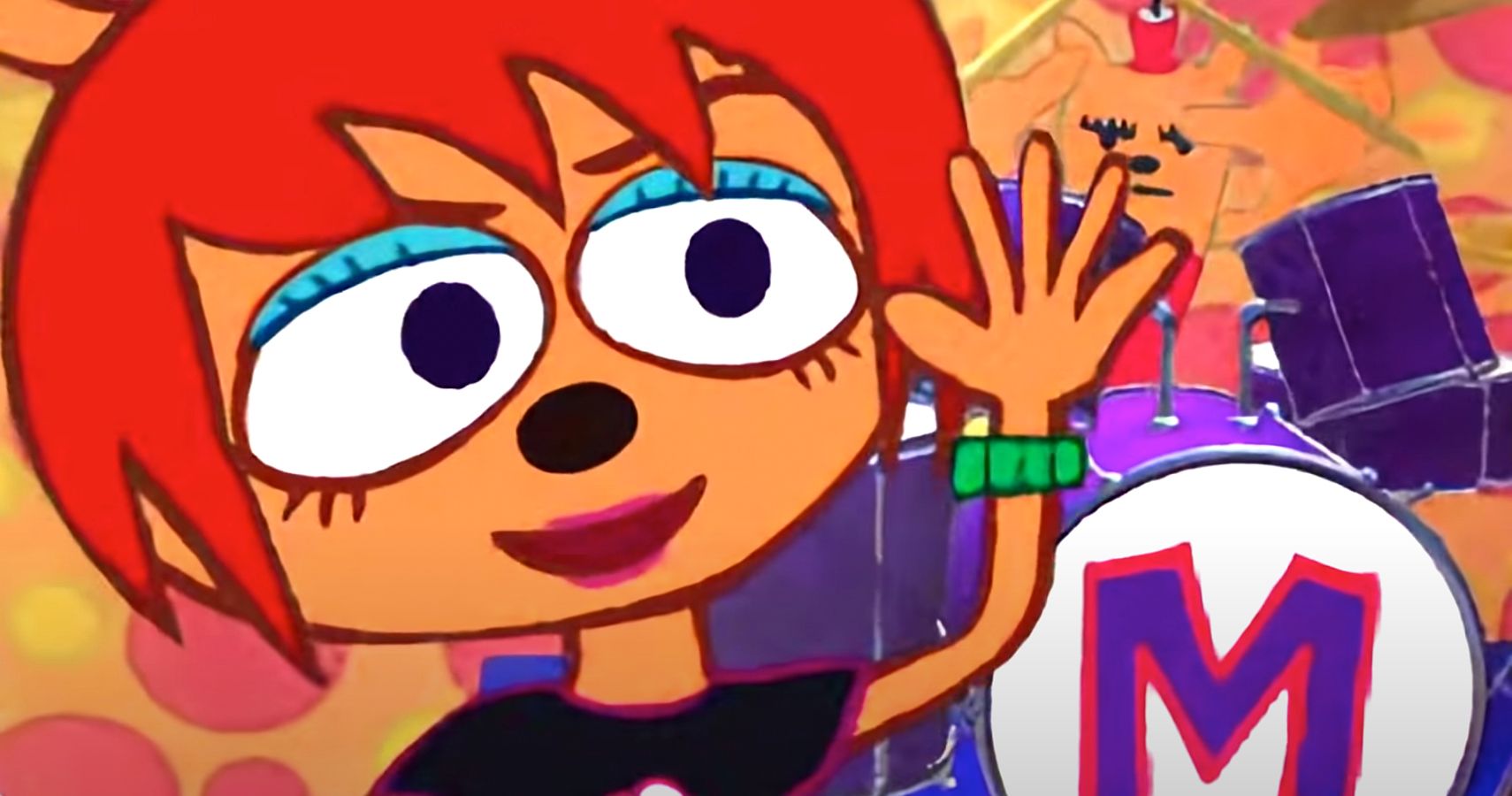 I once read something about why we love certain songs so much and why music doesn’t impact us as much as it used to. From the beginning of time until the beginning of the 2000s, people consumed a lot of music socially. When the internet made music more accessible, we lost some of that. We lost the human connection associated with the consumption. I believe the same can be said for games. More and more people game alone, or they game online with people they may not talk to, which causes gaming to lose not only the human connection, but the memories that could come from it.

Things stay with us longer when they are connected to memories. Arguing over which controller was the “better” controller and beating a level that you had been trying for weeks and weeks to conquer while screaming and laughing with your friends. Those are all beautiful memories I can associate with this game, even if most of you seem to have forgotten it ever existed.

Play the game – not just because you can beat strangers online, or because it’s the hottest game out. Play it because it’s fun and brings you joy. That’s why no matter what, I’ll always leave it to Lammy.

FIFA 22 to cheer up England fans after Euros final

Case Study: The Design Behind 'Cubism's' Hand-tracking – Road to VR