Playing the first two chapters of Final Fantasy 7 Remake, it becomes clear just how massive an undertaking Square Enix’s remake of the classic role-playing game will be. In addition to beautifully recreating Midgar and making the members of rebellion group Avalanche feel like real humans, the first two hours of Remake both stretch out and finely contextualize what happened in just the first 25 minutes of the original Final Fantasy 7.

What was once rushed in an attempt to invest players in the story of Cloud and his compatriots in Final Fantasy 7 is explored fully in Remake. Barret’s mistrust of Cloud becomes more than just a single line of text: “Ex-Soldier, huh? Don’t trust ya!” It’s explored through terse dialogue exchanges and exaggerated voice acting. Cloud and Aerith’s introduction, the two of them both haunted by demons, hints at her doomed fate. And the early appearance of Sephiroth, lavishly introduced in the remake’s second chapter, lays the foundation of Cloud’s past.

The early hours of Final Fantasy 7 Remake offer much better characterization and storytelling than the 1997 original. It’s also a gradual tutorial of the remake’s dense combat system, a mix of real-time action and tactical command-based inputs. (The remake’s “Classic” mode was available, but Square Enix wouldn’t let us play it during our demo.) 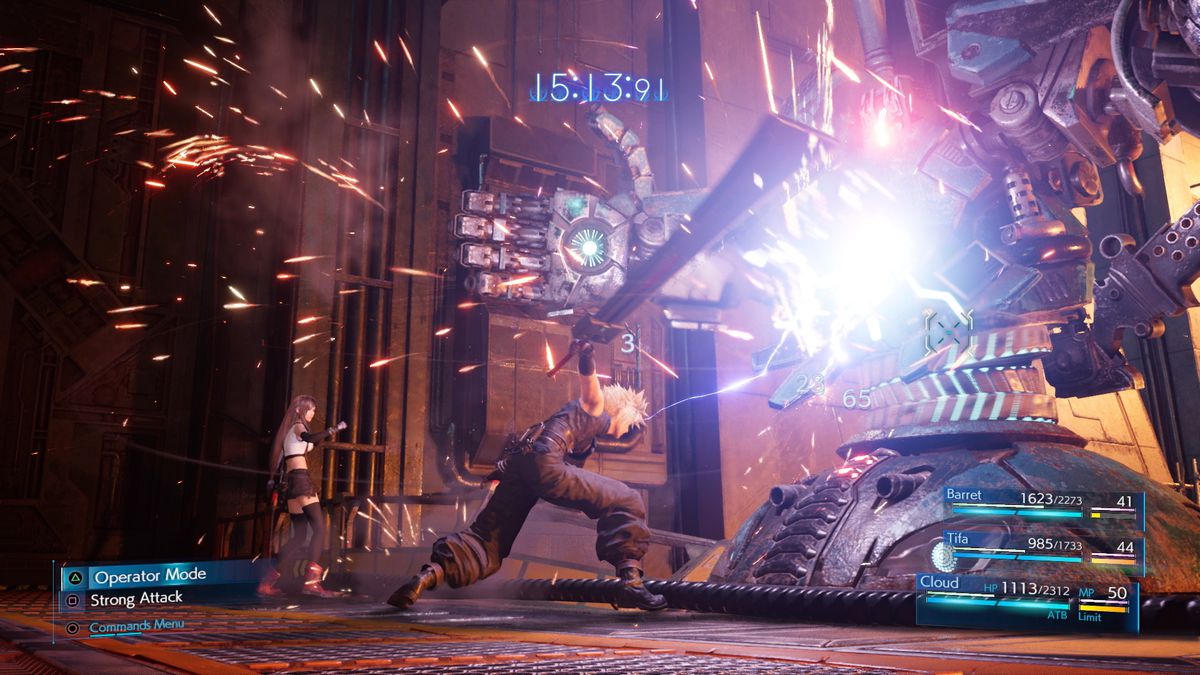 I started off controlling just Cloud, then Cloud and Barret as they take on the Scorpion Sentinel in a boss battle that’s both dynamic and drawn out. Switching between characters takes some getting used to — and oftentimes the button assignments for actions felt unintuitive.

But the real-time hack-and-slash stuff felt good, especially as I built up momentum by whacking the robot boss with Cloud’s buster sword repeatedly, dodge-rolling out of harm’s way, then swapping to Barret for long-ranged attacks. It’s possible to pause and issue commands — consuming potions, casting spells, or performing combat abilities — when the active time battle meter for each character filled up.

Players won’t have to worry about random encounters in Remake; run-ins with Shinra security forces are frequent, but they’re paced smartly and feel organic to the story. However, during my demo, the camera and enemy lock-on reticle seemed to fight against me. Trying to focus on a particular enemy, like a cannon taking pot shots at my crew, was frustrating. Good camera control seems to be one of Remake’s weaknesses. I had a particularly annoying brawl with a couple of elite soldiers, backed by two sentry guns, which I barely survived because I was jammed into a corner, struggling to see.

There are intriguing diversions away from the structure of the original Final Fantasy 7 in Remake. After playing through the first two chapters, which end with Cloud jumping on a train and escaping Soldier’s forces, I jumped ahead to the remake’s seventh chapter. There, I had control of Cloud, Barret, and Tifa, as we worked our way through another Mako reactor bombing run. Eventually, we would face the mechanized boss known as Air Buster, but before we got there, Remake threw me an intriguing twist. 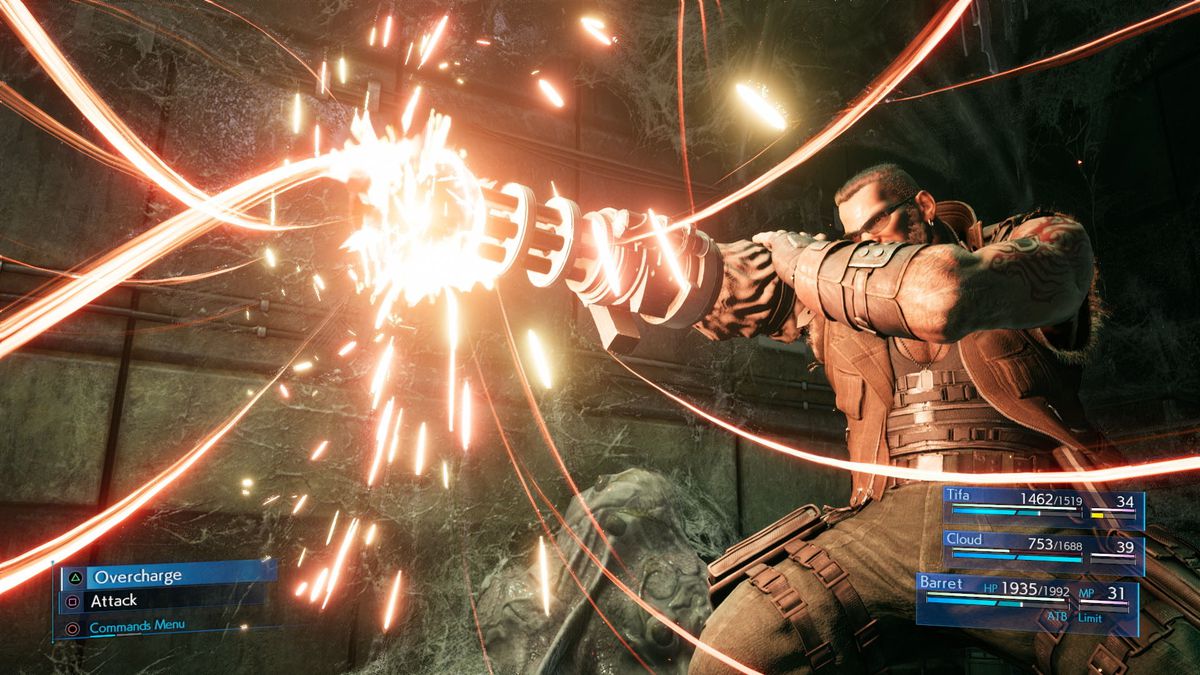 In the run-up to that boss battle, my Avalanche trio encounter a few supply outposts, where I could hack into various components of the Air Buster. I could, for example, choose to disable some of its attacks, like the devastating “Big Bomber” move, by interrupting supply deliveries. Or I could hack its AI, giving it fewer chance to repair itself. Each decision was a trade-off, and it will be interesting to see how players optimize the Air Buster boss battle by hacking away certain components.

The Air Buster battle is also an example of how much more elaborate (and far less corny) the remake’s cutscenes are. Rather than President Shinra escaping via toy-like helicopter after his evil monologue, he’s presented a giant hologram, looming over our heroes. The Air Buster battle itself is multi-phased, and presented me with my first chance to summon the massive Leviathan. Summons add a new layer to the battle commands, rather just serving as flashy super-spells. Each character can expend their own ATB gauge to have summons fight on cue. Otherwise, they’ll attack of their own will, ending with a big finish before departing.

Some of Final Fantasy 7 Remake’s extended storytelling verges on padding, though, like a moment from the original that requires Cloud, Barret, and Tifa to synchronize a button press. Square Enix has blown that up into a frustrating mini-game in Remake that involves pushing the analog sticks in time with Tifa’s cues. 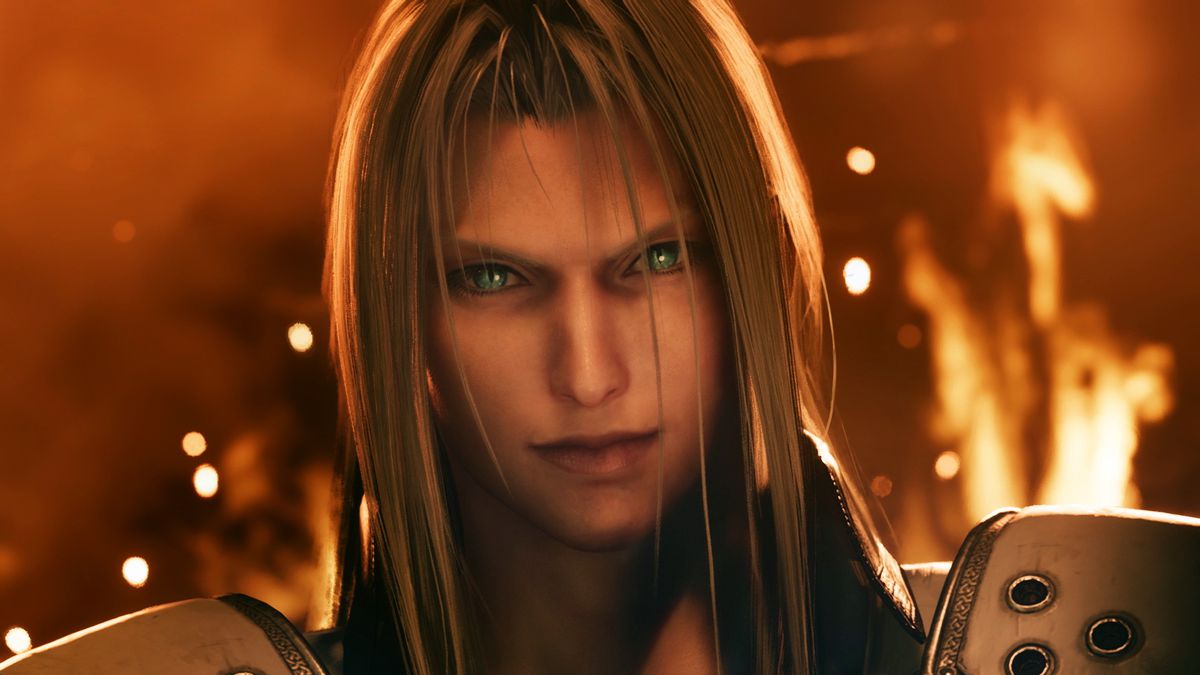 Where Remake succeeds, just based on its first few hours, is its combat. After (mostly) getting the hang of the game’s mix of real-time action to fuel my ATB gauge and its commands and character switching, I found myself having a lot of fun — more fun than I did the menu-based gameplay when in played the PlayStation original two decades ago. At times, it can feel overwhelming, but there’s never a dull moment. I escaped more than my share of battles by the skin of my teeth.

Having played Final Fantasy 7 obsessively on my original PlayStation — but admittedly giving up right at the final Sephiroth battle (I know, I know) — I had mixed feelings about the remake. I know it will be a long, long wait to reach its modern-day conclusion, and I’m unsure I have the patience to see it through multiple games (and console generations), more than 20 years later. But just a few hours with Remake turned me around, largely based on its deep and compelling combat system.

Final Fantasy 7 Remake is coming to PlayStation 4 on April 10.

Virtus.pro forced to play with a stand-in at the Los Angeles Major