Insomniac’s been gearing up for the June release of Ratchet & Clank: Rift Apart, unveiling neat new gameplay gimmicks, the name of the illustrious Lombax, and the bustling metropolises of its interdimensional worlds. A lot’s on show, and it’s evident that the team has learned in abundance from its time on Spider-Man, but it looks as though that could go the other way in the next outing with the dual-protagonist system between Ratchet & Rivet paving the way.

It’s been busy, to say the least. Only two years after Spider-Man, the next game, Miles Morales, launched to marvelous reviews. A year later, and Ratchet & Clank: Rift Apart is set to bless our screens with its high-octane gunplay, bolt-hoarding avarice, and its platforming escapade. What’s more, it even seems to have its sights set on Sunset Overdrive, the hit Xbox and PC exclusive skater, zombie extravaganza which itself set the scene for the first Spidey. There’s a lot on Insomniac’s docket, but Spider-Man 2 is an inevitability that is certainly underway. A key part of that game will be juggling both Miles and Peter, the two Spider-Men. Let’s face it, not doing that would be a gargantuan missed opportunity after the reception to both Miles Morales and Peter’s headline games.

With that, there’s truly no better way to test the waters of a dual-protagonist system than giving it a whirl in the game Insomniac’s most comfortable with, its flagship IP. Enter the multiversal jaunt with Nefarious pulling someone other than Lawrence’s strings. Not only are we getting the expected run-and-gun, jump-and-strafe experience with Ratchet and his buddy Clank, but we’re also dipping our toes into the shoes of Rivet, the new Lombax. Their stories seem to be running in the same direction with Ratchet constantly trailing behind, and it remains to be seen how things will play out once the two are united – whether we’ll be able to pick and choose who we are or whether they’ll be unabashedly separated to avoid this conundrum. 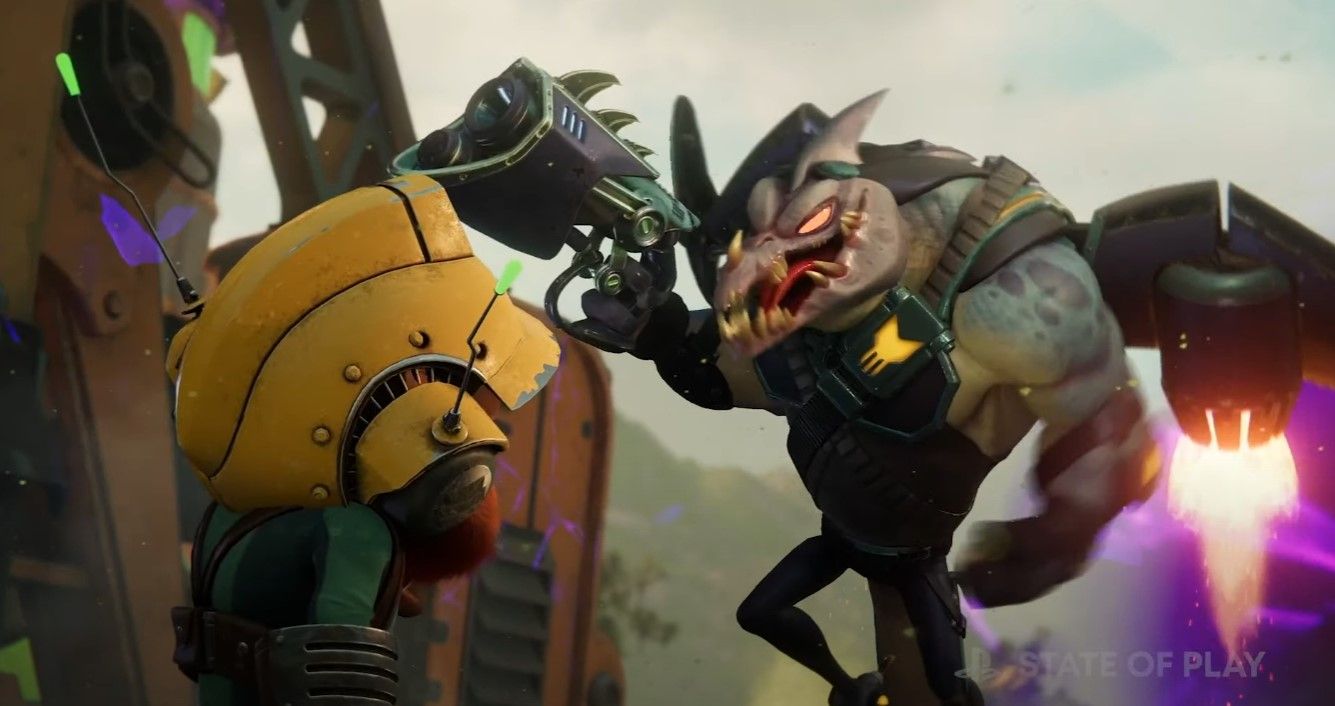 That’s the thing with these kinds of systems – there are problems that arise. Why, for example, would Peter be handling a breakout criminal robbing a bank without the aid of Miles? Insomniac is likely treading the ground to figure out how it can answer questions such as these convincingly without it coming off as blatant game design masquerading as story. There’s a lot of holes that need filling to keep the narrative convincing and immersive, but it could also be that, rather than doing so – or, in conjunction with that method – we get glimmers of choice, like how Grand Theft Auto 5 lets you flip through the tires of its tricycle.

As it stands, what we know is that Ratchet has lost Clank and is looking for him and this Lombax he saw on a poster. Rivet, however, isn’t a damsel in distress trapped in another castle. She’s got agency, her own bad-ass arsenal, and know-how with toppling thugs like the now-rebranded Goons4Less. She’s constantly a step ahead, a world away, all with Clank in toe. This wouldn’t particularly work in the confined cityscape of New York, so perhaps Insomniac isn’t testing the waters with the system narratively, but rather gameplay-wise. There are some quality-of-life tidbits that were featured in the State of Play, like the fact that the two share currency in the storefronts, meaning that you don’t have to grind for bolts with two separate characters.

Things like that could transcend Ratchet & Clank and make way to Spider-Man 2, even if it’s as little as having the likes of suit tokens shared so that you have to carefully select what outfit you want to stretch out while swinging a punch and throwing a kick. But it’s not exactly something new to PlayStation, what with The Last of Us 2 only recently doing the same. But a common complaint aired at Naughty Dog was with its pacing, and so perhaps Insomniac will try to nail down that aspect of sharing two spandex-clad butts in the hot seat without dragging down the flow of the story by testing out if they can with Ratchet and Rivet. Whatever the case, it’ll have experience going into the next Spidey, and that’ll bleed through in spades – Insomniac is only getting better with age, and that’s an exciting prospect because it means every single new outing is a treasure trove of learned lessons and flashy new gameplay prospects.

Keep Your Home in a Tip-Top Shape