Scott Pilgrim Vs. The World: The Game Complete Edition brings a classic beat ’em up back from the dead.

I’d just like to get it out there right away that they completely miscast Michael Cera in the role of Scott Pilgrim. Scott is an absolute asshole who’s completely oblivious to his own assholery, whereas Michael Cera’s portrayal made him an ignorant but still loveable doofus that somehow wound up getting the girl in the end.

Ugh. That grates me to this day. But with that confession off my chest, let’s dive into Ubisoft’s resurrection of Scott Pilgrim Vs. The World: The Game.

Originally launched in 2010 for the PS3 and Xbox 360, Scott Pilgrim Vs. The World: The Game was a beat ’em up with roguelike elements before roguelikes were much of a thing. That’s because for your average brawler player, Scott Pilgrim was hard. Real hard. Like, you might not make it past the first level with all three of your lives kind of hard, and you’ll especially have trouble with later levels if you don’t figure out that those stores in the background aren’t just random scenery. 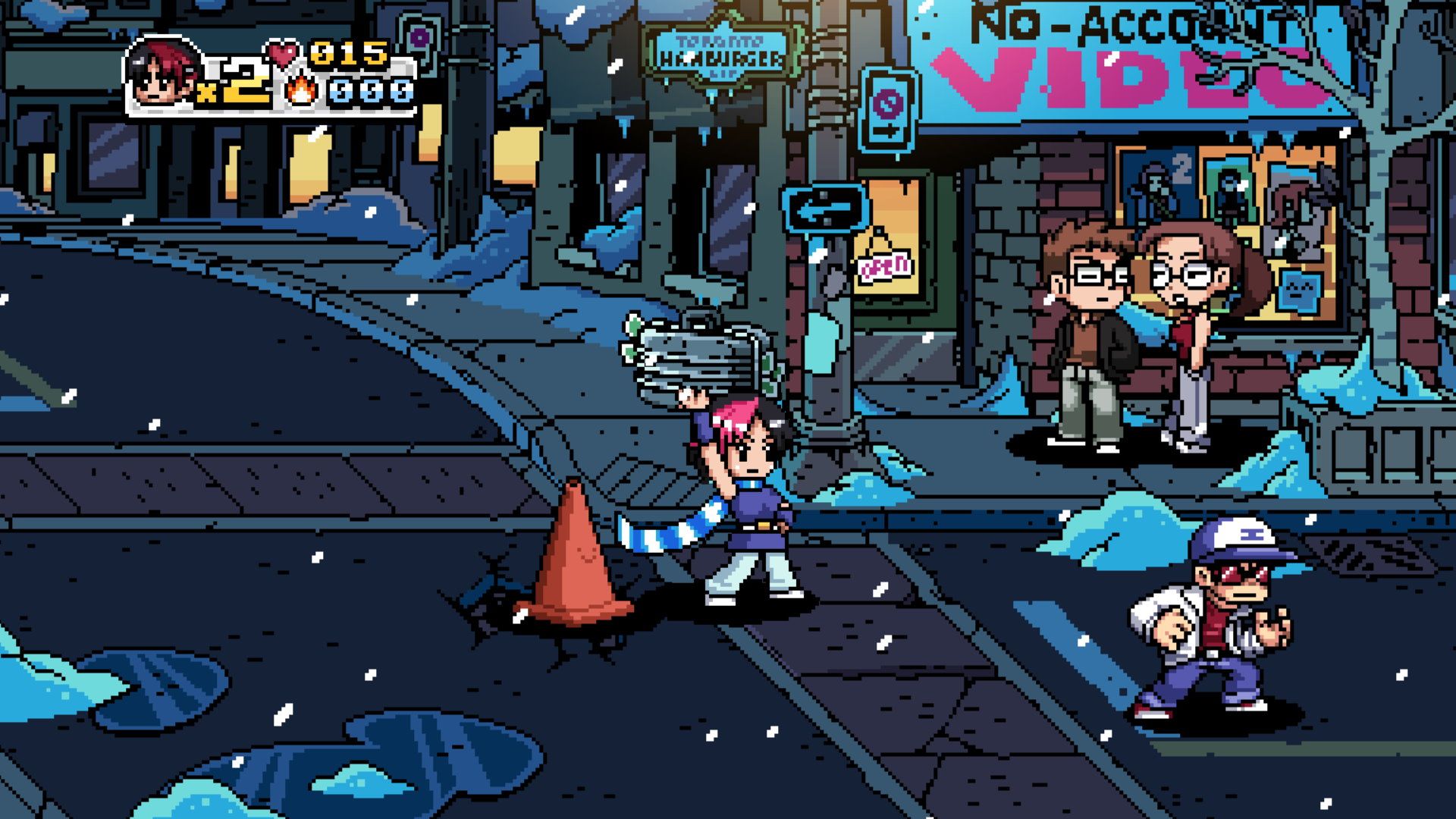 Given that side-scrolling beat ’em ups as a genre had existed for decades, almost excessive difficulty wasn’t really seen as much of a problem for beat ’em up enthusiasts, and Scott Pilgrim The Game quickly became a cult classic. Helping the game along was a banger soundtrack from chiptunes artist Anamanaguchi and iconic pixel art adapted by Paul Robertson (of Pirate Baby’s Cabana Battle Street Fight 2006 fame, and also the same guy who did the animations in the feature film).

Scott Pilgrim The Game doesn’t so much tell the story of Scott Pilgrim as it does stitch together Scott’s greatest hits from the comic into a progression of boss fights against Ramona Flowers’ Seven Evil Exes. Starting with Matthew Patel and ending with Gideon Gordon Graves, Scott and friends must fight their way past waves of nameless baddies while traversing all of Toronto, Ontario in order to finally find true love.

At least, for Scott and Ramona. Pilgrim’s bandmates, Stephen Stills, Kim Pine, and DLC characters Knives Chau and Wallace Wells are basically there to fill out the game’s roster and provide some variety. 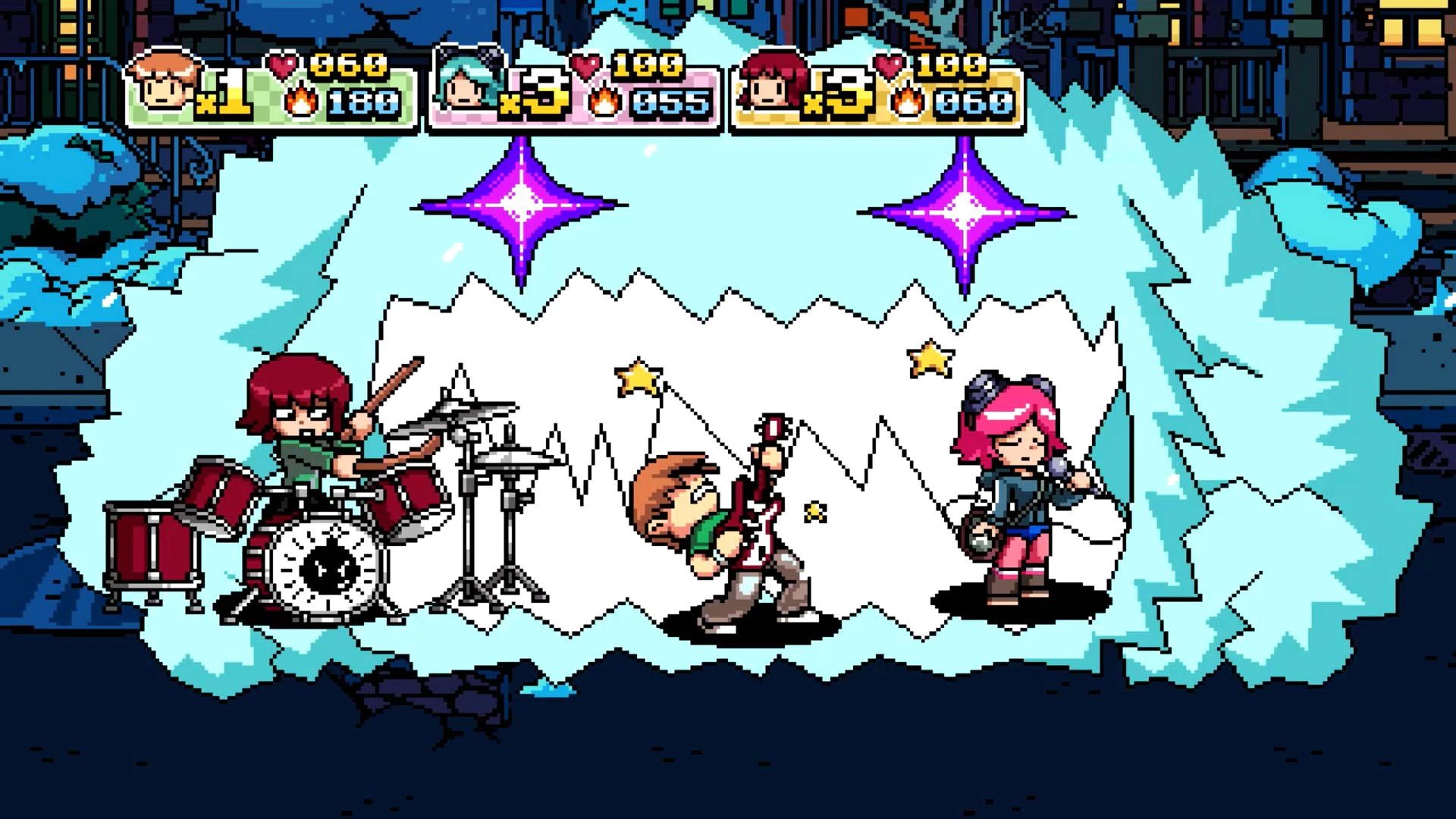 In the beginning, Scott Pilgrim The Game can be punishingly difficult, but that difficulty eases up after you discover how to spend the pocket change dropped by every defeated enemy. Food, books, records, and other consumables are sold by stores manned by other Scott Pilgrim characters and increase your chosen character’s stats. Most of those stores are accessible on the first level, and there’s a quick teleport back there to purchase power-ups whenever you have the cash to do so.

I played the game way back in 2010 and found that the best strategy was to just farm the first level a few times so you could afford to buy a few books to increase your stats. After that, making a run at later levels becomes much easier and less prone to running through all three of your lives (unless you decide to purchase more, of course).

And I did much the same for Ubisoft’s re-release of Scott Pilgrim Vs. The World The Game – Complete Edition. The original game was taken off the PlayStation and Microsoft stores after the license expired in 2014, leaving Scott Pilgrim without a home. Last year, Pilgrim creator Bryan Lee O’Malley started tweeting at Ubisoft to bring the game back in honor of the series’ 10th anniversary, and surprisingly, the tactic actually worked although neither O’Malley nor Roberts had anything to do with the remaster. 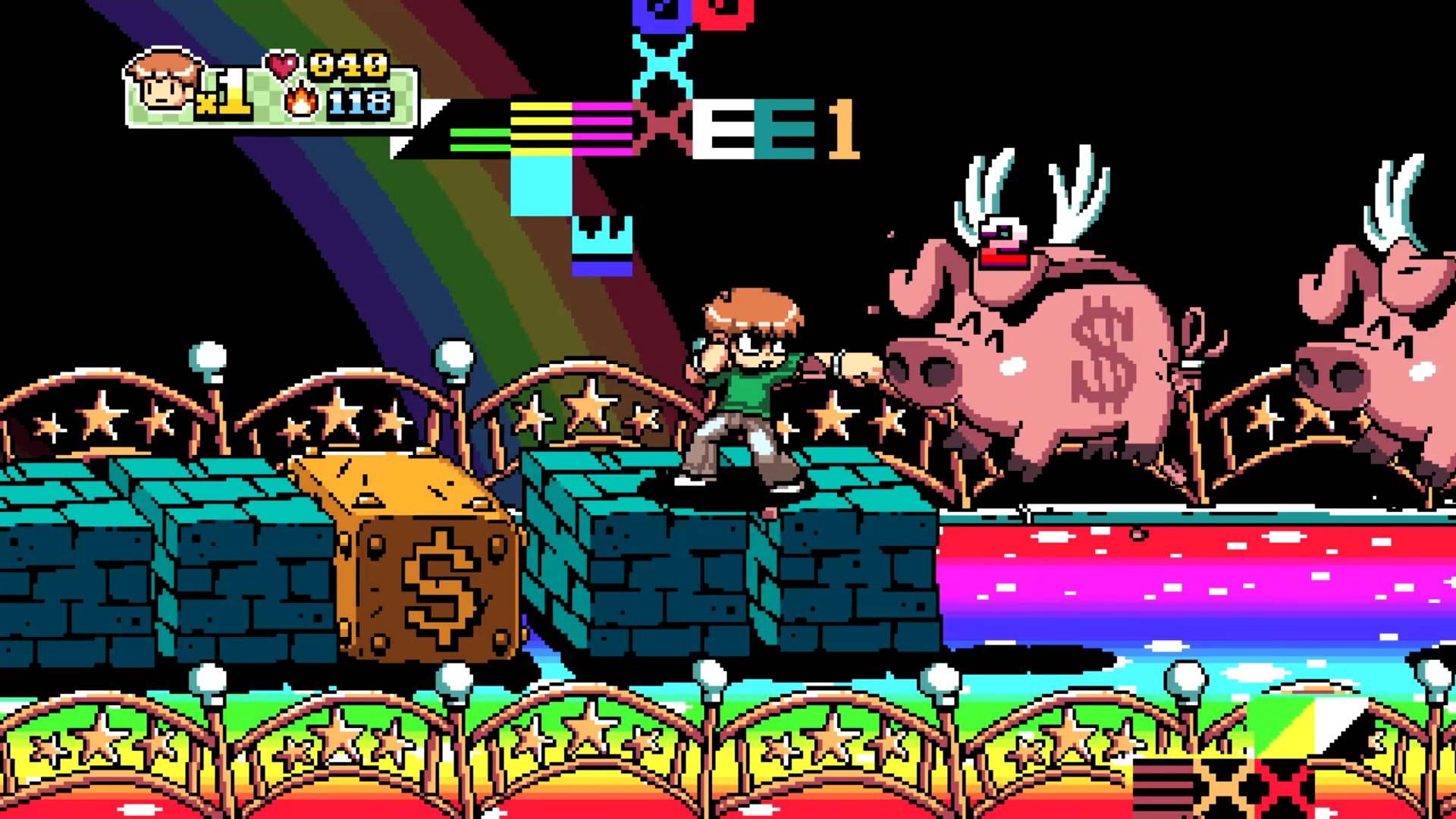 Related: Scott Pilgrim Vs. The World: The Game Is Finally Getting A Physical Release

Having played through the campaign, I can report that Scott Pilgrim Vs. The World: The Game – Complete Edition is exactly as I remember it. It’s got the same feel, same early difficulty, same great music, and same eye-catching animation. It works perfectly on PC with achievements and controller support, but if you prefer, you can play it on PS4, Xbox One, Nintendo Switch, Google Stadia, or even Amazon Luna. 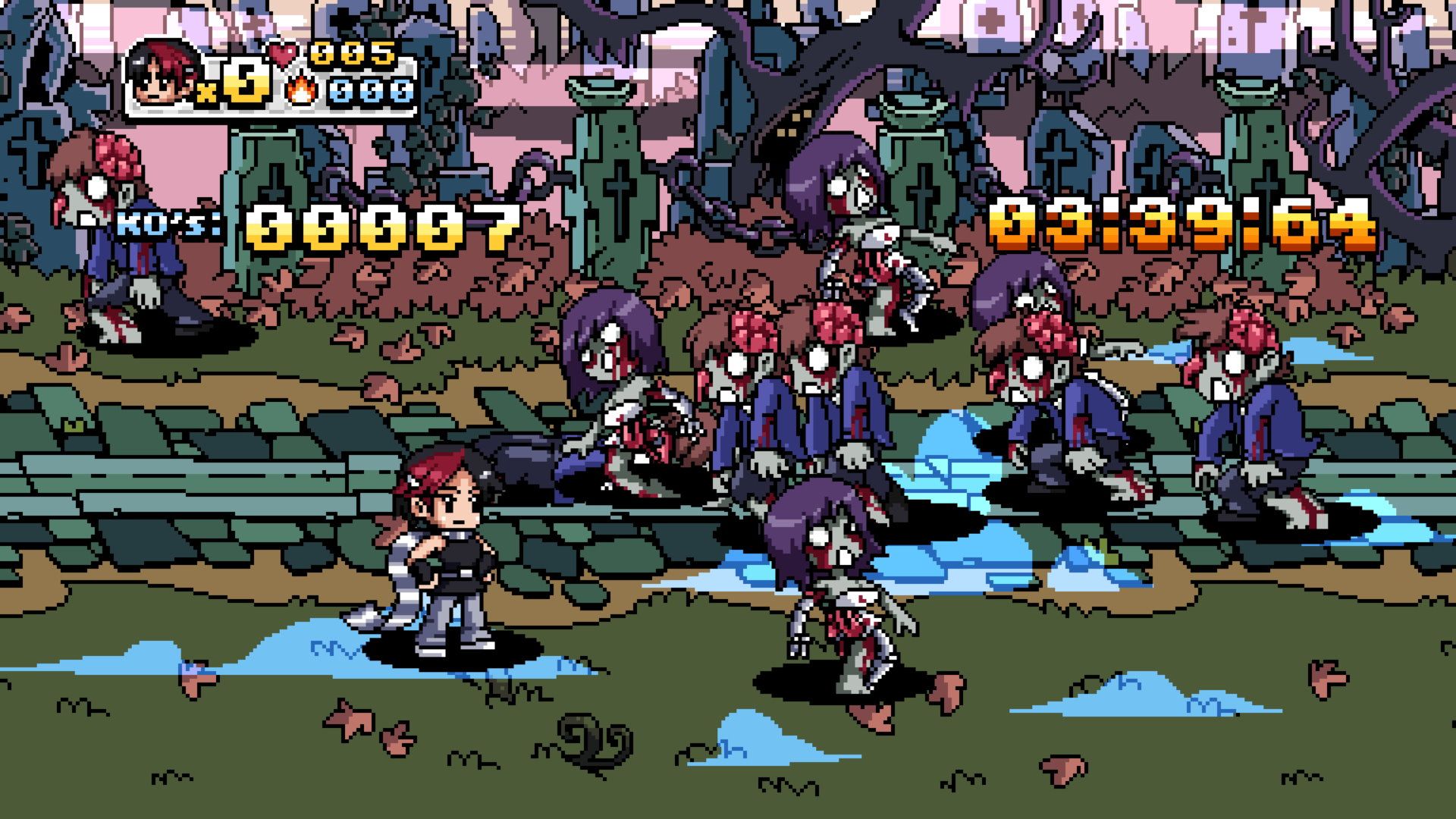 And that’s pretty much it. The only question remaining is how well a 10-year-old game holds up, and I’m pleased to report it seems to hold up just fine. That’s mostly owing to the music and pixel art-style, which are both timeless.

However, I will say that Ubisoft’s rerelease of Scott Pilgrim is relying a lot more on nostalgia than other recent beat ‘em ups. I’d still think something like Streets of Rage 4 is a fine game on its own even in the absence of Streets of Rage 1 through 3, while Scott Pilgrim might not have the same appeal to someone who’s never read the comics, seen the movie, or played the game back in 2010.

Still, it’s fun to dust knuckles as Scott Pilgrim once more for old-time’s sake. Even though he really shouldn’t have been cast as Michael Cera.

A PC copy of Scott Pilgrim Vs. The World: The Game – Complete Edition was provided to TheGamer for this review. A physical release will be available to pre-order from Limited Run Games.

Next: Ubisoft Massive Is Working On A New Star Wars Project 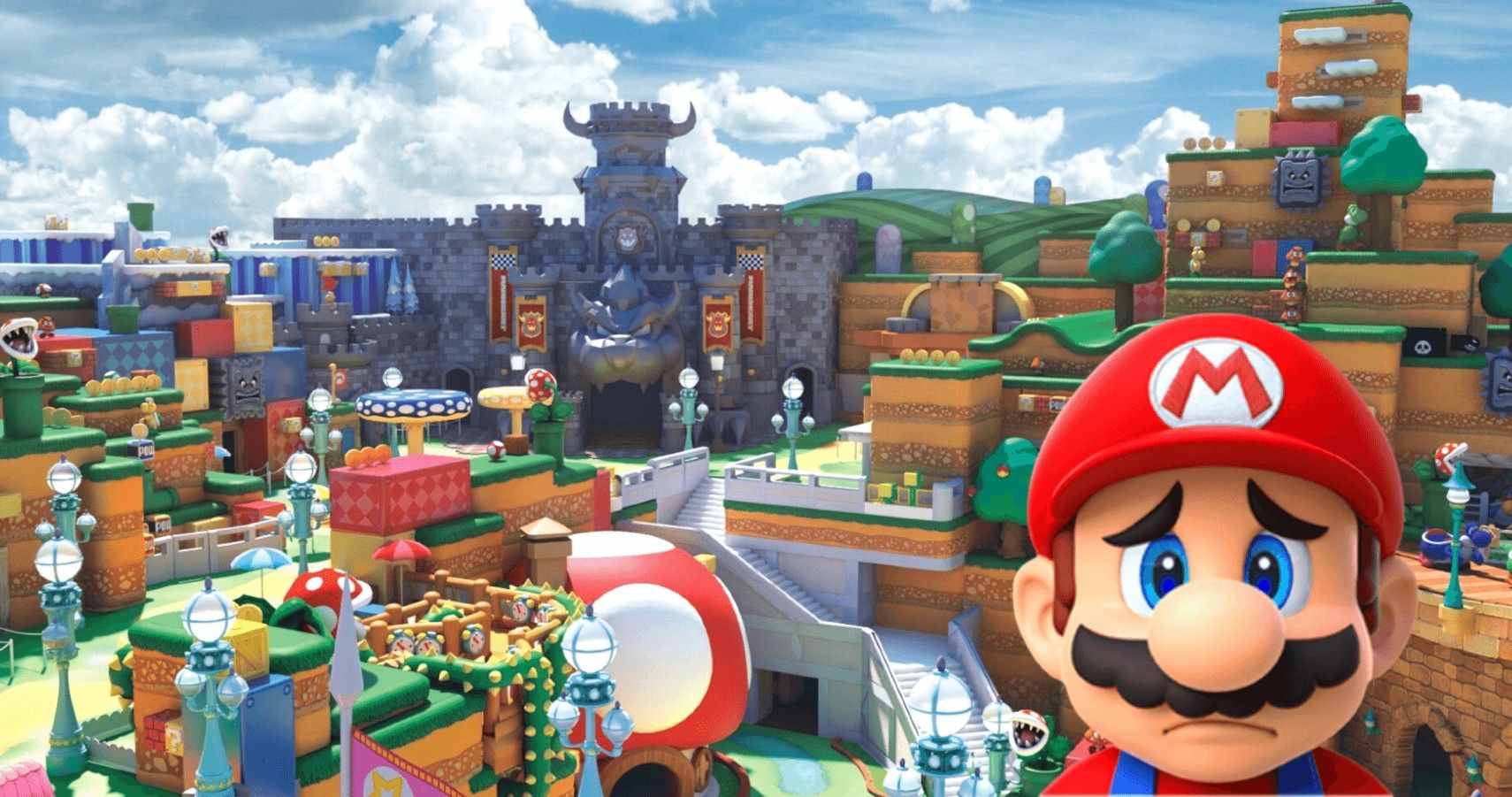 Among Us 2: Everything We Know So Far