Reportedly, SolaryTV rescheduled a match between Prodigy and the opposing squad, HypHypHyp. Supposedly, Prodigy wasn’t aware of the change because they weren’t in the official SolaryTV discord. When HypHypHyp realized dafran was unaware of the match, the team began tweeting (now deleted) at him making jokes.

Dafran lashes out at the team and organization

Supposedly SolaryTV’s tournament rules et stated dafran’s tardiness could cause his team to forfeit the series. In any case, the opposing team agreed to compete if they were awarded a 1-0 lead going into the match. In response, dafran began publicly bashing both their opponent and the organizers. He ripped into former OWL player Damien “HyP” Souville of the opposing team, saying he was making excuses because they were afraid to lose.

His reactions to the situation are no surprise. Dafran has a history of explosive reactions and impulsive behavior. In fact, his toxic behavior is well known throughout the Overwatch community. Despite the streamer’s anger-fueled remarks, his teammates remained relatively calmer. Furthermore, no other member of Prodigy publicly slammed HypHypHyp or SolaryTV.

SolaryTV issued a statement in response to the scandal. Their official statement on Twitter stated, “Dafran is banned for life from our tournaments.” Moreover, the tournament organizers clarify the ban is a direct result of his derogatory comments towards Hyp, his team, and SolaryTV. 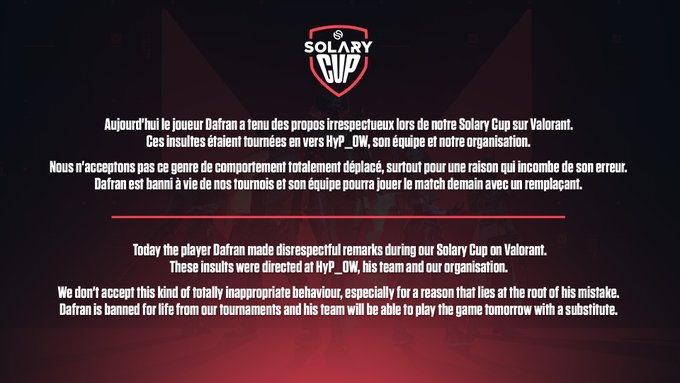 Luckily, Prodigy, as a team, wasn’t barred from competing in the cup. In that case, the team played the semi-finals with a substitute and won the match versus HypHypHyp. Moving forward, dafran has no impending issues hindering him from competing in Valorant. While he’s earned himself a life-time ban from SolaryTV events, he’s still free to compete in other tournaments with no issue.

Where To Find Nintendo Switch Joy-Cons Online: Available At Amazon, Walmart, And More