As the news regarding event cancellations and postponements continues to pour in at an alarming rate, Riot Games have announced that the LCS is shutting its doors to fans and media for the foreseeable future. LCS and Academy games will continue as scheduled without a live audience. Fans that purchased tickets to any of the barred events will receive full refunds. LCS Commissioner Chris Greely’s announcement was shared late this morning on the LCS Official Twitter page. 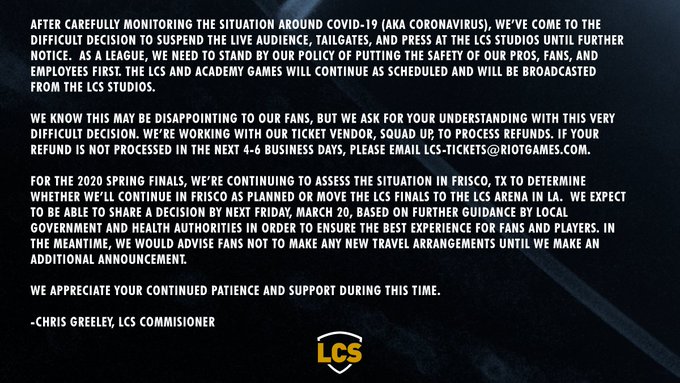 Yesterday’s bombshell news in the sporting industry came via the NBA suspending the rest of the league’s season indefinitely after Utah Jazz star Rudy Gobert tested positive for COVID-19. We’ve since heard of several other major athletic leagues shutting their doors, including the NBA’s G-League and, as of moments ago, the MLS. While Riot Games have put a ban on audience members and press being present at the studios, fans will be glad to know that the games will at least continue for the time-being. All matches should still be viewable live and online through Riot’s various streaming platforms.

Riot acquires Hypixel Studios for the development of Hytale

Sweet Anita fears for her life because of an obsessed stalker