Legends of Runeterra spoilers are back, this time for the Noxus region. Swain, the Noxian Grand General, takes the field. While he isn’t bringing any new keywords to the game, Swain is loaded with enough abilities to dominate a match. He isn’t alone either, bringing his army in the form of cards — Swain is out to dominate Runeterra.

Swain as a 3/6 means he’s a pretty beefy card on turn six. Thanks to his ability though, any time he deals combat damage to the enemy Nexus, it takes an additional 3. This only helps accelerate him to the 12 non-combat damage required to level up. Interestingly, Swain is the first unit to reference non-combat damage in Legends of Runeterra. While 12 damage might seem like a lot to level up, there is a lot of support for it. Cards like Legion Saboteur and Boomcrew Rookie deal non-combat damage when they attack. Because of the way Swain is worded, he does not have to be on the battlefield to see the damage done either. 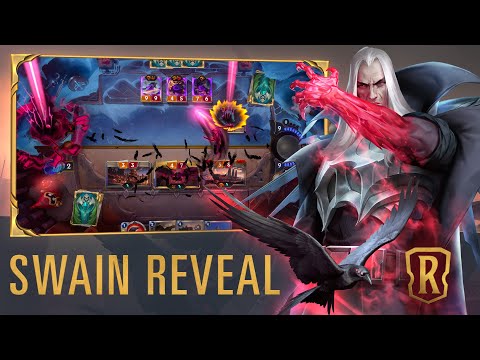 Once Swain does level up, he turns every spell that does non-combat damage into a 2-for-1. Every Mystic Shot you cast also removes their biggest blocker from their board. Swain’s Nexus Strike ability also gets a huge buff, now dealing three damage to all enemy targets. His champion spell is Raven’s Flock and can take out an already damaged or stunned unit. Noxian Fervor is similar in effect to Get Excited! but not as good. If you don’t have a unit in play you will not be able to cast Noxian Fervor. If you do, you’re dumping resources into a unit just for it to die.

To help Swain conquer, he brings with him a couple of powerful cards. First up is Imperial Demolitionist. When it comes into play, you get to ping one of your units to deal two to your opponent’s Nexus. This is really good! It does require you to have a second creature on board, and you’d want them to live so it’s not a waste of resources. Legion Rearguard or Inspiring Mentor are the perfect targets for this.

Citybreaker is just a big wall that deals damage. It is non-combat damage so it helps level up Swain, but since it has zero attack it might not be particularly useful. There are much better things to cast on turn four. On turn eight, however, you can’t go wrong with The Leviathan, a 5 / 8 with Overwhelm that draws a Swain when it enters the field. At the start of each round, it deals one damage three times to the enemy Nexus. While worded weirdly, it allows for future abilities involving non-combat damage to open up. The Leviathan might not be viable in most decks, but it can dominate a game when it resolves.

Swain and these cards are going to feel right at home in an aggro list, likely paired with Piltover & Zaun. All the non-combat damage in that region will help accelerate Swain to level two quickly. Swain also pairs well with Yasuo; the frequent stuns and Yasuo’s ability to damage stunned units makes them a dangerous duo. The Ionia region additionally gives players access to Dawn and Dusk to make multiple copies of Swain for a ton of damage. For a fun combat trick, Ghost will give Swain elusive to help get damage through.

Hands-On With The Pathless: The Creators Of Journey And Abzu Have A Massive Hit On Their Hands

Windows 10 Is Getting A Setup Option Optimised For Gaming