The Main Event of the 2020 League of Legends World Championship finally started today. The best teams in the world are, from today, competing for the most important title of the year. 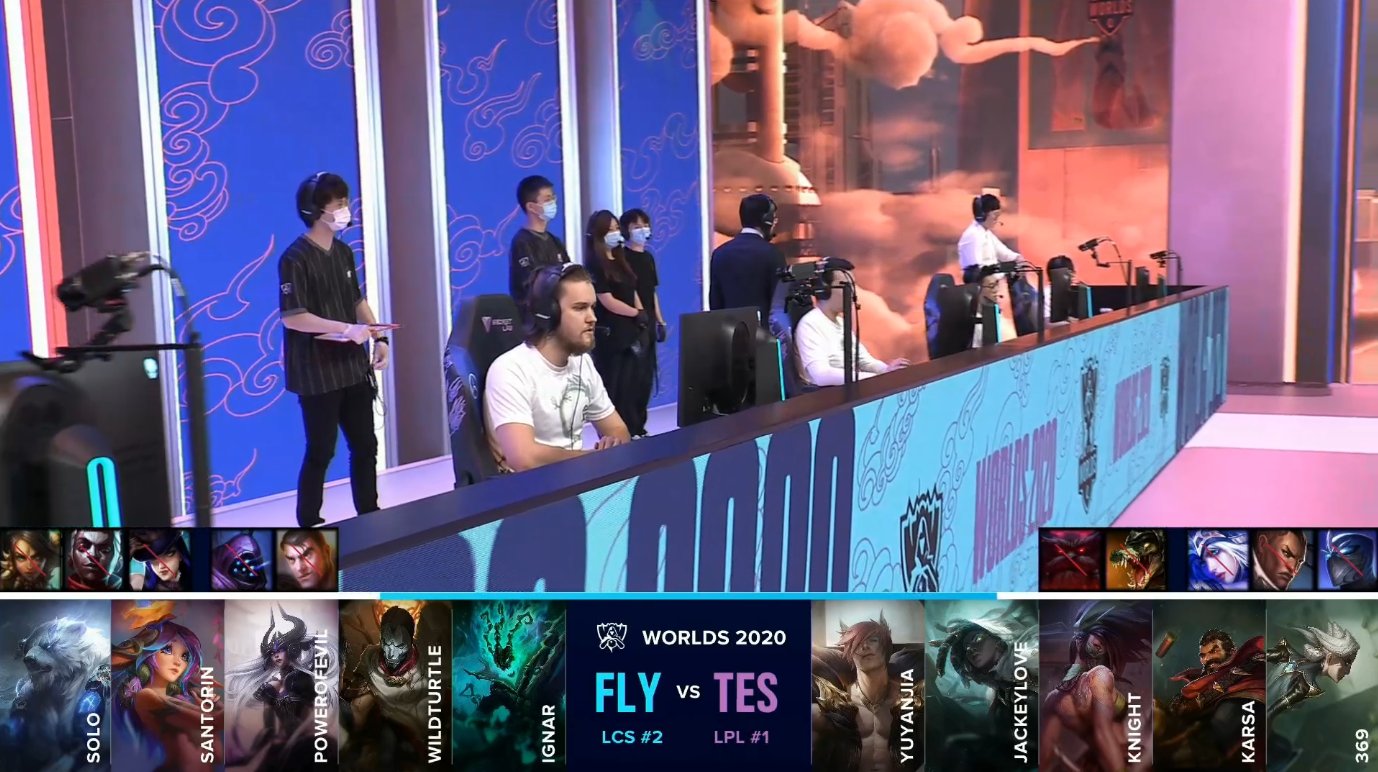 The first game of the day matched the Chinese champion and the second North American seed, and from the beginning, both teams played very aggressively in every lane.

That is how Top Esports quickly got ahead, getting the first blood with a solo kill in the top lane, and from that moment they dominated the early game, increasing the gold advantage with more kills and the first neutral objectives.

Play after play, the Chinese took a different advantage every time they moved, while FlyQuest could do nothing but try to resist. They couldn’t fight Top Esports in any way.

By minute 20, the gold difference was over 7k, the turrets score 1-4, 2-10 in kills, and 0-3 in drakes. A while later, TES took the Ocean Soul and rotated to take the Baron Nashor, but the North American team needed to avoid that, so they also rotated and started a team fight that they lost, so the Chinese team could easily take the buff.

With that power and advantage, Top Esports opened the enemy base and quickly won the first game of the Main Event.

Unicorns of Love vs DRX 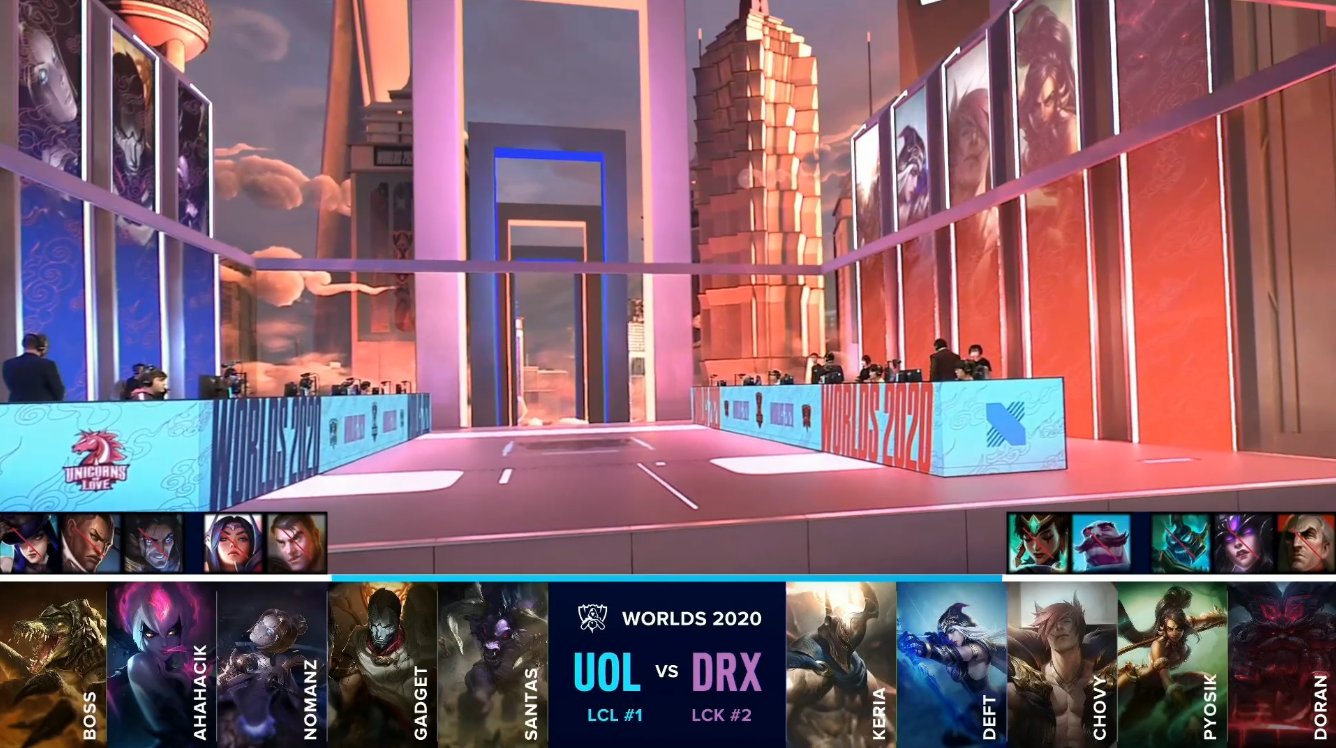 We had to wait five minutes to have the first blood of the second game, that came after a gank and counter gank in the mid lane. It was DRX who took it, and the Korean team also had farm advantage, which gave them the lead in the gold score.

In the next few minutes of the early game, DRX increased their advantage (they were 0-7 in kills at minute 12), and took most of the neutral objectives, while the gold difference was bigger and bigger every minute.

Despite that, UoL fought and got some kills that gave them some hope in the game, but their chances went away when DRX got the Nashor, started destroying turrets all around the map, and took the Dragon Soul.

After a team fight in the mid lane, DRX opened the enemy base, and a couple of minutes after that, they won the game, with the insane carry of Pyosik, DRX’s jungler, who ended the game 13/1/6. 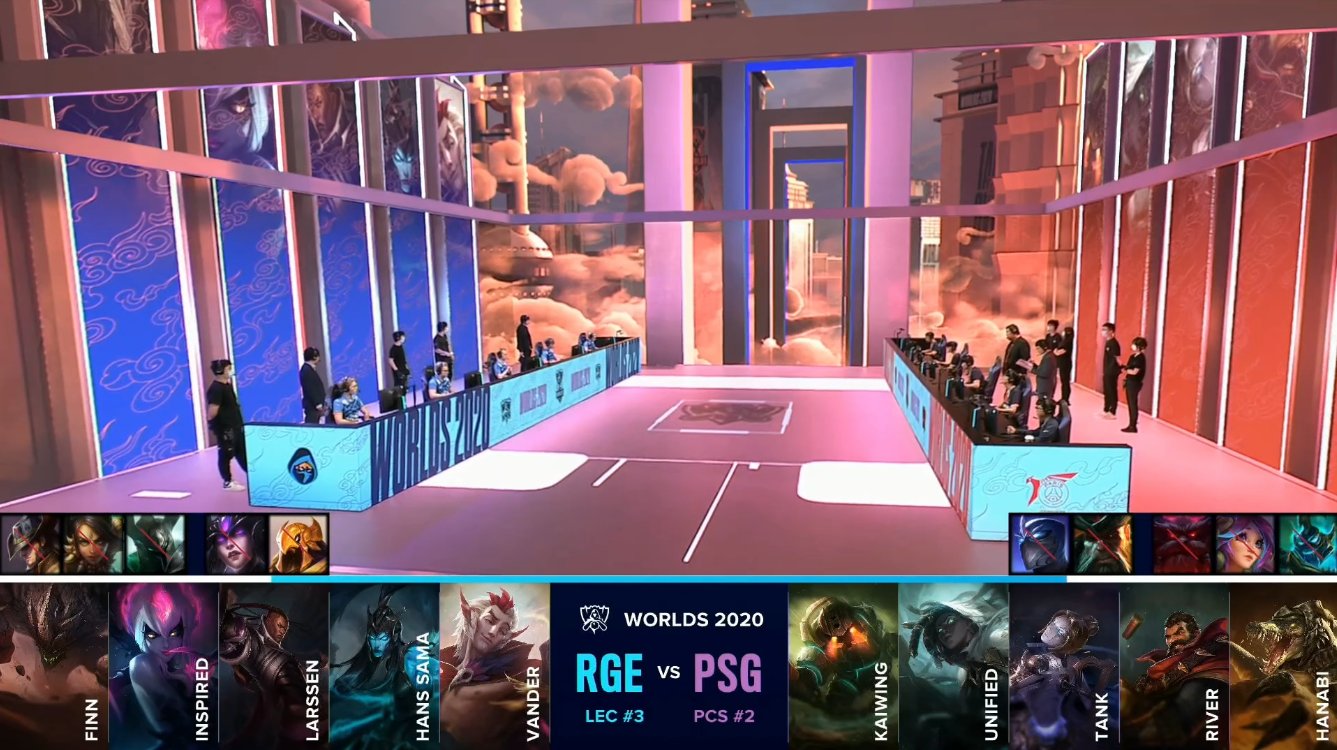 The European team had their first game at Worlds against one of the most surprising teams of the Play-in Stage, PSG Talon.

Rogue took a very early first blood in the mid lane after the rotation of the bot lane that gave them a slight advantage during the first minutes. With the same strategy, they took a second kill in the same way, and Hans Sama started the game with a 2/0/0 score and not losing any farm.

At first, the gold difference wasn’t too big, but the European team took advantage of their Malphite pick and destroyed PSG every time they tried to fight, which started increasing the distances in the gold score (7-0 in turret plates also helped).

Once in the mid-game, when they reached the minute 20, the kills score was 10-0, the gold difference 9k, and the turrets score 5-0. With this advantage, the European team could get the Baron Nashor, and its buff helped them to open the enemy base. 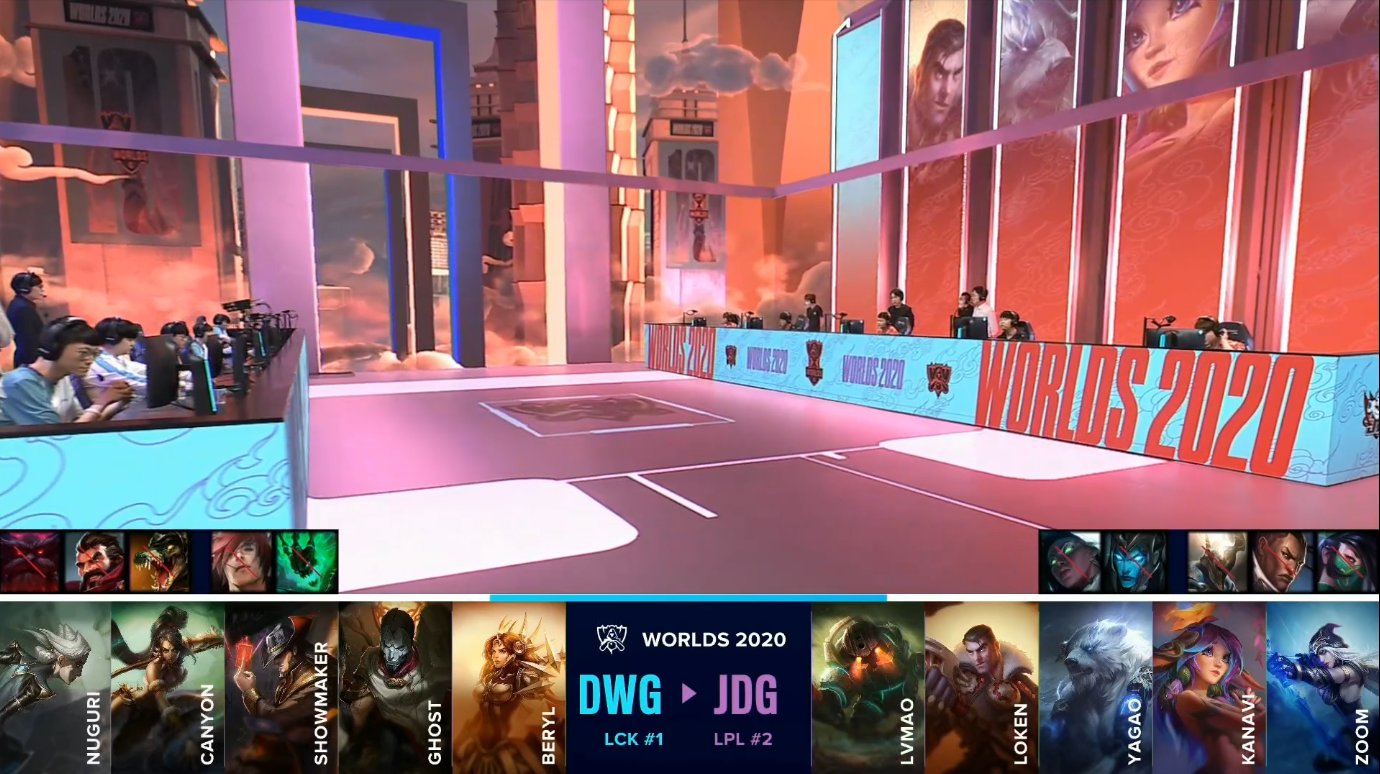 Clash of titans in the first day of the Main Event.

Damwon took the first blood in the first minute after a late invade from JD Gaming, and took the lead in the gold score.

Both teams kept playing very aggressively, and we had several kills on each side during the first minutes of the game. The Korean team had the advantage overall, and it kept growing heading to the mid-game, thanks to some additional kills, the first turret, and the first two drakes.

At minute 20, after taking their third drake and three more turrets, Damwon got an Ace, killing all the enemies in the top side river, and right after that took the Baron Nashor.

With the buff still active, the Korean team pushed the bot lane until they opened the enemy base, killed every enemy ahead one more time, and won this titan fight. 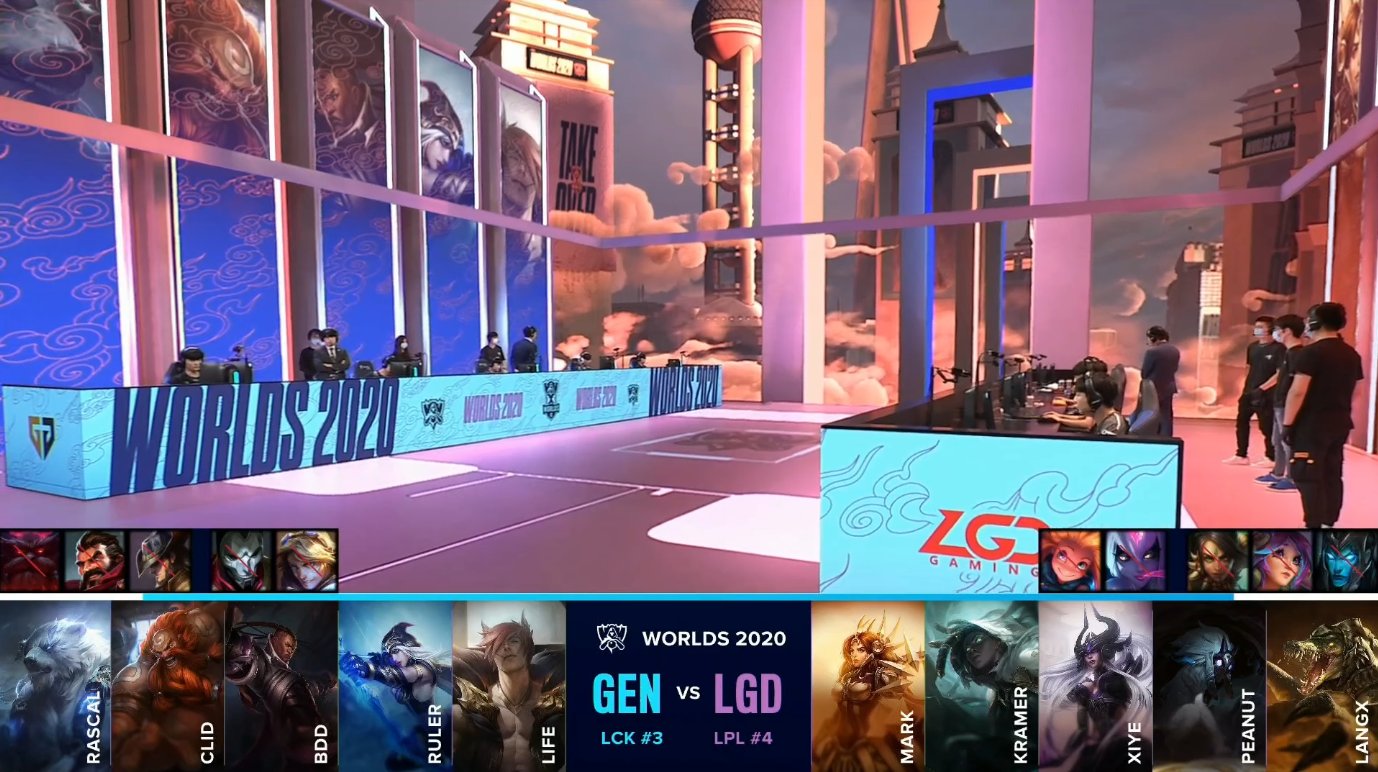 A second duel between LCK and LPL.

After seven minutes, Gen.G took the lead with the first blood in the bot lane, but after a fight around the Herald two minutes later, LGD put the kills score even (3-3), so they didn’t fall too much behind.

From that moment the game became pretty chaotic, and both teams kept trading kills and objectives.

The Korean team got more turret plates, and their farm was a bit better. This, together with the first turret, put them with 2k gold advantage, but the game kept being a mess, and both teams played very aggressively.

Once in the mid-game, Gen.G started the Baron Nashor at minute 24, and LGD got in to fight for it, so the Korean team had to abort the mission. The game was so even at that moment that none of them could get the buff.

Then, both teams rotated to the drake pit, and Gen.G took the lead of the game once again. The difference in the scores was not too big, and we had the same situation during the whole game.

At minute 36, Gen.G could finally get the Baron, but LGD immediately killed four of their players, which allowed them to open the Korean base. A few minutes after that, a new drake appeared, and another team fight took place, but despite the result (both teams ended with three drakes each and four LGD players died), nothing happened.

Gen.G took a second Nashor, and after that, an insanely long and chaotic fight happened. Thanks to this buff, Gen.G quickly pushed the mid lane and opened the enemy base, and managed to finish the game while LGD Gaming was trying to respawn. 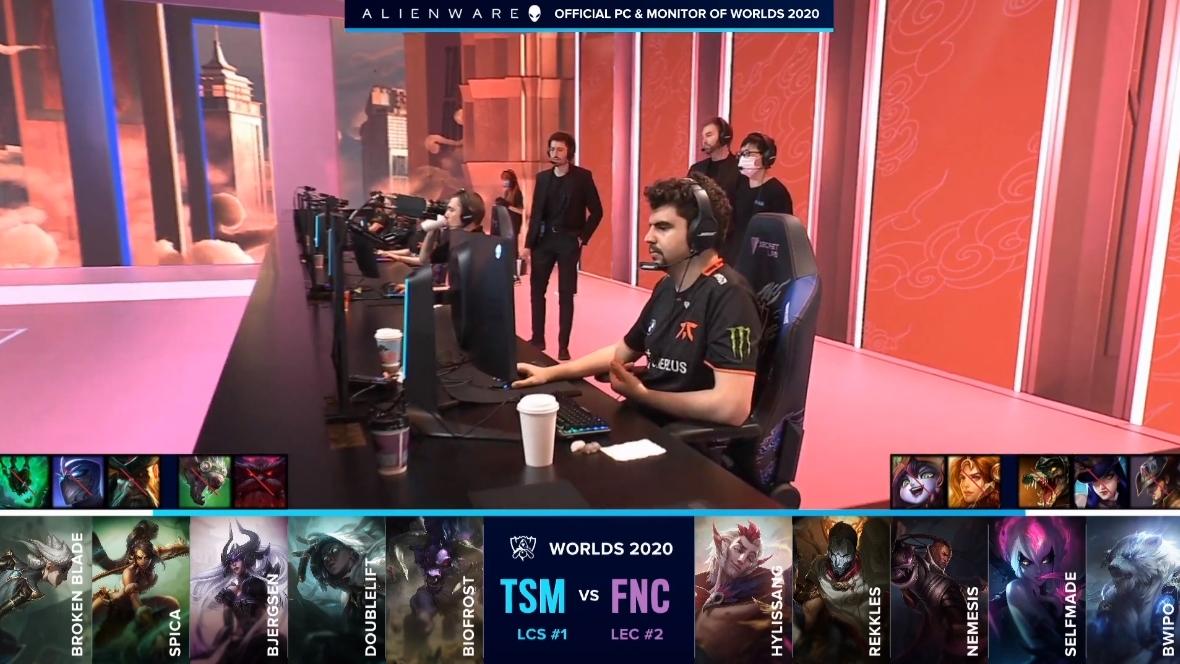 In the last game of the day, Fnatic took the first blood and dominated the first minutes, taking some more kills and the lane pressure, which allowed them to also take the first drake.

Despite that, TSM didn’t fall behind in the gold score, and the match kept being very even since the North American team took advantage of Fnatic’s mistake and got some kills and their first drake.

Minute after minute, the game became very violent, and both teams kept trading objectives and assassinations, with Fnatic being ahead in gold most of the time, and TSM taking more drakes than the enemy.

At minute 26, with 2 drakes each, 3-3 in turrets, 4-5 in kills, and only 300 gold difference, Fnatic killed the Baron Nashor and only had to pay for it with the life of one of their players.

With the buff, they pushed through the top and mid lanes and fought the enemy players while one of them, Broken Blade, was opening their base through the bot lane.

In the next play, TSM traded their third drake for their mid inhibitor. The map was completely broken…

After winning a fight in the mid lane at minute 32, Fnatic took the Baron Nashor again, and with an amazing teleport rotation, killed all the enemies (got an Ace), and won their first game at Worlds.