The parent company of publisher 505 Games, Digital Bros, has let slip that Bloodstained: Ritual of the Night currently has a sequel in development.

This news comes in the form of a leaked financial report which details the performance of several 505 Games published titles including Control, Ghostrunner, and Bloodstained: Ritual of the Night. The latter’s inclusion in the document is more interesting, however, as the section which details Bloodstained’s performance has “second version in development” in bold at the bottom of a list of bullet points.

While it’s a rather odd choice of phrase, there’s not much else Digital Bros could be alluding to other than a full-blown sequel. There’s even more evidence to suggest that a sequel is coming if you scroll down further and take a look at the section detailing Ghostunner’s financial performance.

The Ghostrunner section also has the “second version in development” phrase as well, a franchise that has been confirmed to have a sequel in the works. The language used is rather cryptic, but viewing the financial report as a whole leads one to believe that a sequel to Bloodstained is currently in development. 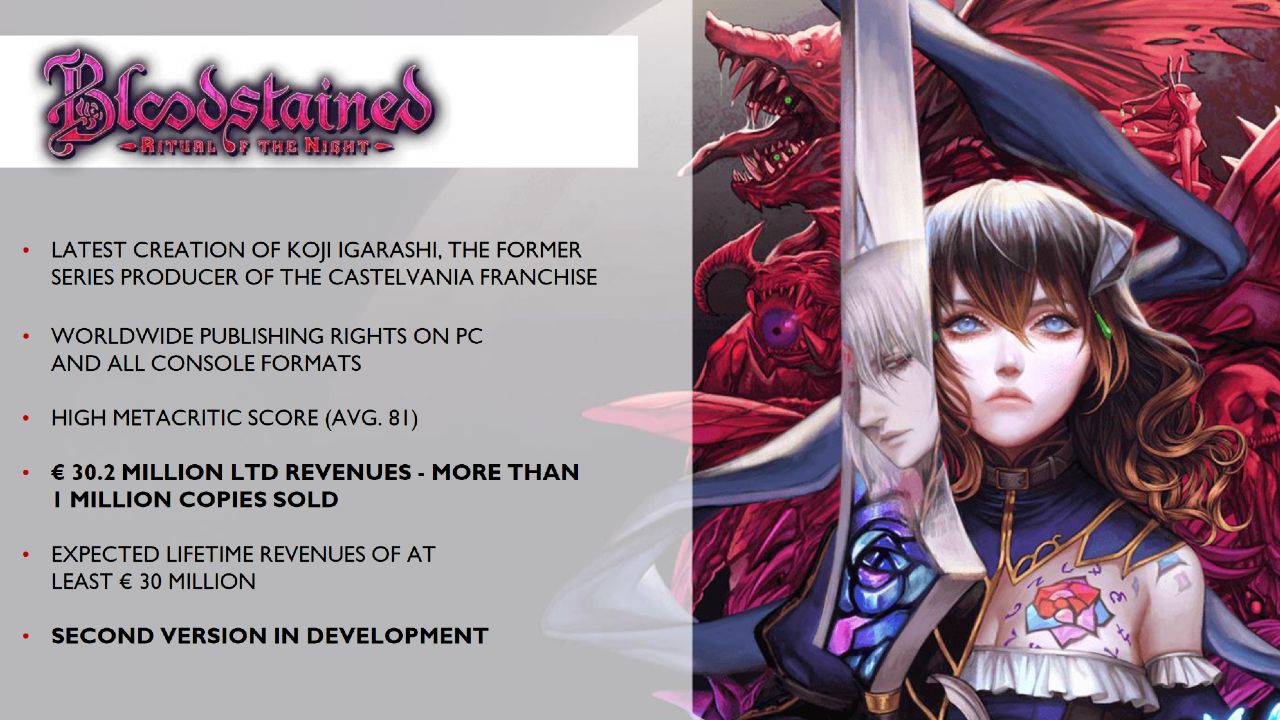 Also detailed within the financial report is Bloodstained’s overall sales figures, and one look at them helps you release just why it’s getting a sequel. According to the report, Bloodstained has sold more than a million copies, generating over €30 million in revenue. What with Bloodstained being a fairly niche title, selling a million copies is relatively impressive when it comes to new IP.

For those that don’t know, Bloodstained: Ritual of the Night is a spiritual successor to the Castlevania series and is helmed by the franchise’s former producer Koji Igarashi. Bloodstained made history back when it was originally announced, quickly becoming Kickstarter’s most backed game, raising over $5.5 million from nearly 65,000 backers.

The game has the player take on the role of Miriam, an orphan trying to remove a curse that slowly turns her body into a crystal as time goes by. If you’d like to learn more about Bloodstained, you can read our review here.

Core Arrives On The Epic Games Store Today. So, What Is Core?

A first step to automating your business processes

Microsoft Flight Simulator’s France And Benelux Update Is Out Now

The Medium coming to PlayStation 5 in September

Call of Duty Modern Warfare Season 4 release: Is this when Warzone Season 4 comes out?

Criterion pulled off Need For Speed to work on Battlefield 6