The stereotype of the Chaotic Good character in D&D is basically Chaotic Neutral, but only towards jerks. All the killing and looting and “random” destruction that comes with being Chaotic Neutral, but it’s all okay because you only do it to bad guys. This is not bad by itself, but playing a stereotype can get old fast and there are plenty of other ways to play this alignment.

One thing that is important to note is that there are many reasons that a Chaotic Good character might follow the law. The primary reason is safety. Just because you’re Chaotic doesn’t mean you’re stupid, although nearly everyone playing D&D has met a player who thinks that. Often, it isn’t just a matter of stealing from acceptable targets. Sometimes the acceptable targets can hire lots of guards that will stab you many times if you steal from them. 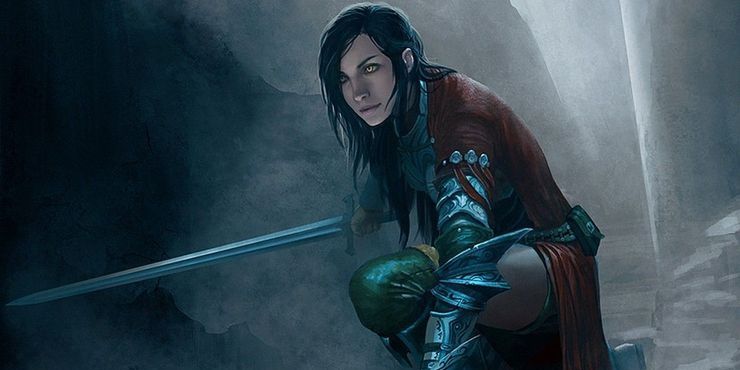 Other times the jerks that should be prime targets for a Chaotic Good character don’t need to hire guards. Sometimes they are protected by the law itself. Sometimes they are the law, or respectable members of society. The law might be inflexible or simply corrupt. There are many ways that the law and civil society might protect unsavory or even deeply evil people. You don’t think that’s fair? Well, that sounds like a much more interesting conflict for a Chaotic Good character to have than “I will steal and cause mayhem but that’s fine because they’re the bad guys.”

It can also be interesting to explore why you want to be Chaotic. Is it an ideological choice – are you a rebel who believes that the empire is cruel and unjust and needs to be destroyed? Is it a lifestyle choice – are you a punk with a heart of gold who doesn’t listen to The Man? Or is it a personal choice – do you do what you want when you want to and follow your own heart without caring about society at all? All of these could fall under the Chaotic Good alignment, but you would roleplay each one vastly differently.

You can also explore the conflict between being Chaotic and being Good. Lawful Good characters – at least good ones – have this conflict almost baked into their character. They have to decide whether it’s moral to break the law to save people or whether they should follow orders even if they will hurt people. Chaotic Good characters can have these conflicts too. Is it okay to arrest an innocent outlaw to save lives? Can you put aside your individualism to work in an organized structure that does good? There’s not always a right or wrong answer to these conflicts, but introducing them leads to better roleplaying.

When playing a Chaotic Good character, not everything will be black and white. Playing your character as a mayhem maker that is justified because you point them at acceptable targets will likely be less memorable than if you add some complexity. Also, your party will certainly thank you for not getting the entire party arrested every time you see a town guard bullying a peasant.