In Bethesda's Elder Scrolls franchise, you can either play as a Redguard or meet other Reguards along your journey as the Nerevarine, the Hero of Kvatch or the Dragonborn. You'll hear of the tropical lands of the Redguards' Hammerfell, with the alleged, exciting prospect of visiting the latter in Elder Scrolls 6. But with Elder Scrolls Online, you can already travel to Hammerfell's Alik'r Desert in your next storybook adventure as The Vestige.

The Alik'r Desert is the opposite of Skyrim with its snow-capped mountains and cold climate, exchanging them for the sweltering heat and sand dunes. As you roam the desert, you will notice plenty of new monsters not encountered before, with none more challenging than their larger-than-life world bosses. 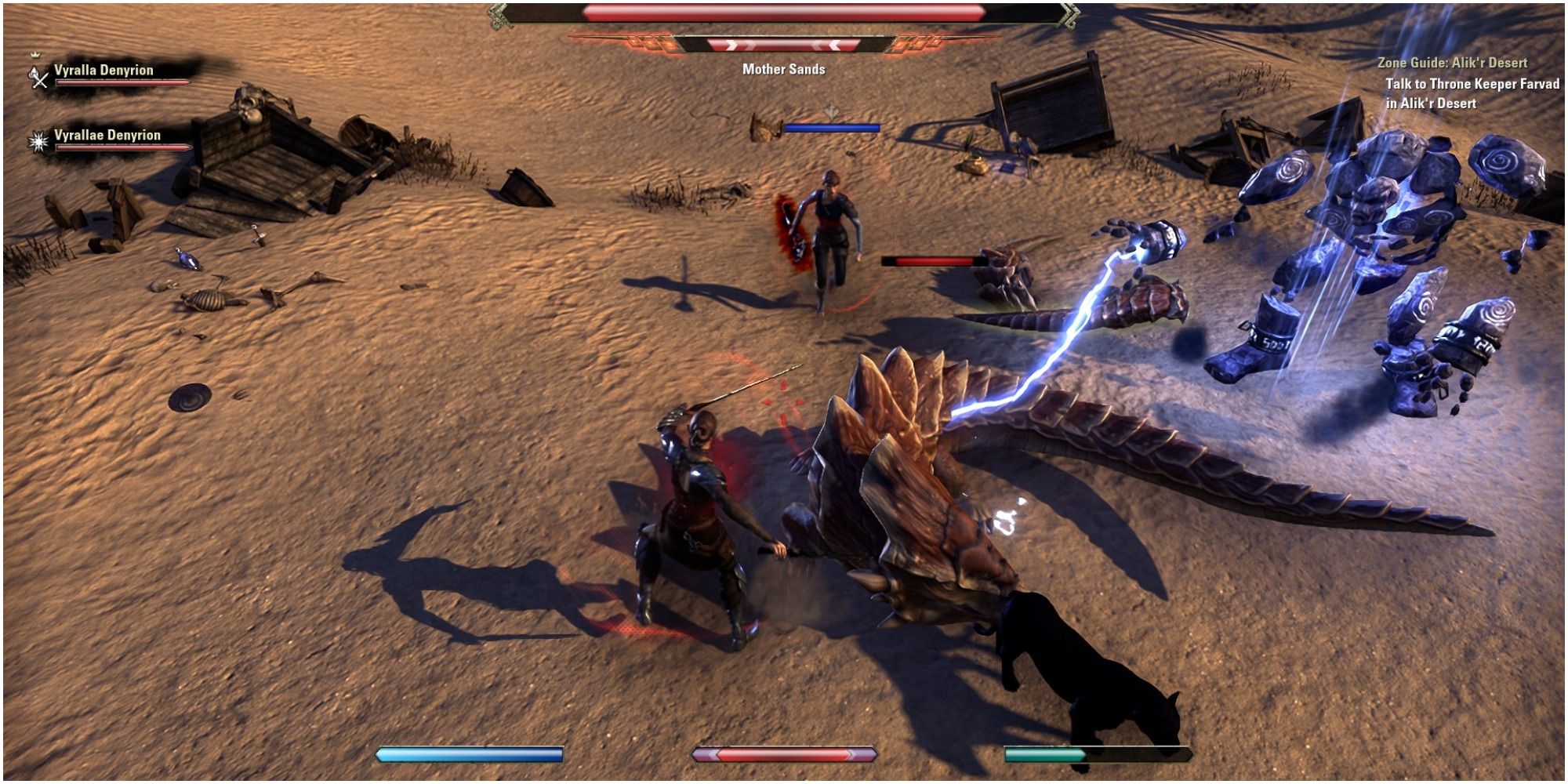 Mother Sands is an apt name for this giant Duneripper, who has made her home in the Lost Caravan in the south of Alik'r Desert. While not what you would call a difficult boss, Mother Sands is hard to pin down since she has the tendency to burrow into the sand and reappear someplace else.

Not only that, she has got her baby hatchlings as a backup for when things get a bit too rough for her to handle, but they are easily dealt with. Aside from her standard tail sweeps and jaw bites, Mother Sands is not too challenging – but this is a great boss for those just starting out and wanting to level up quickly. 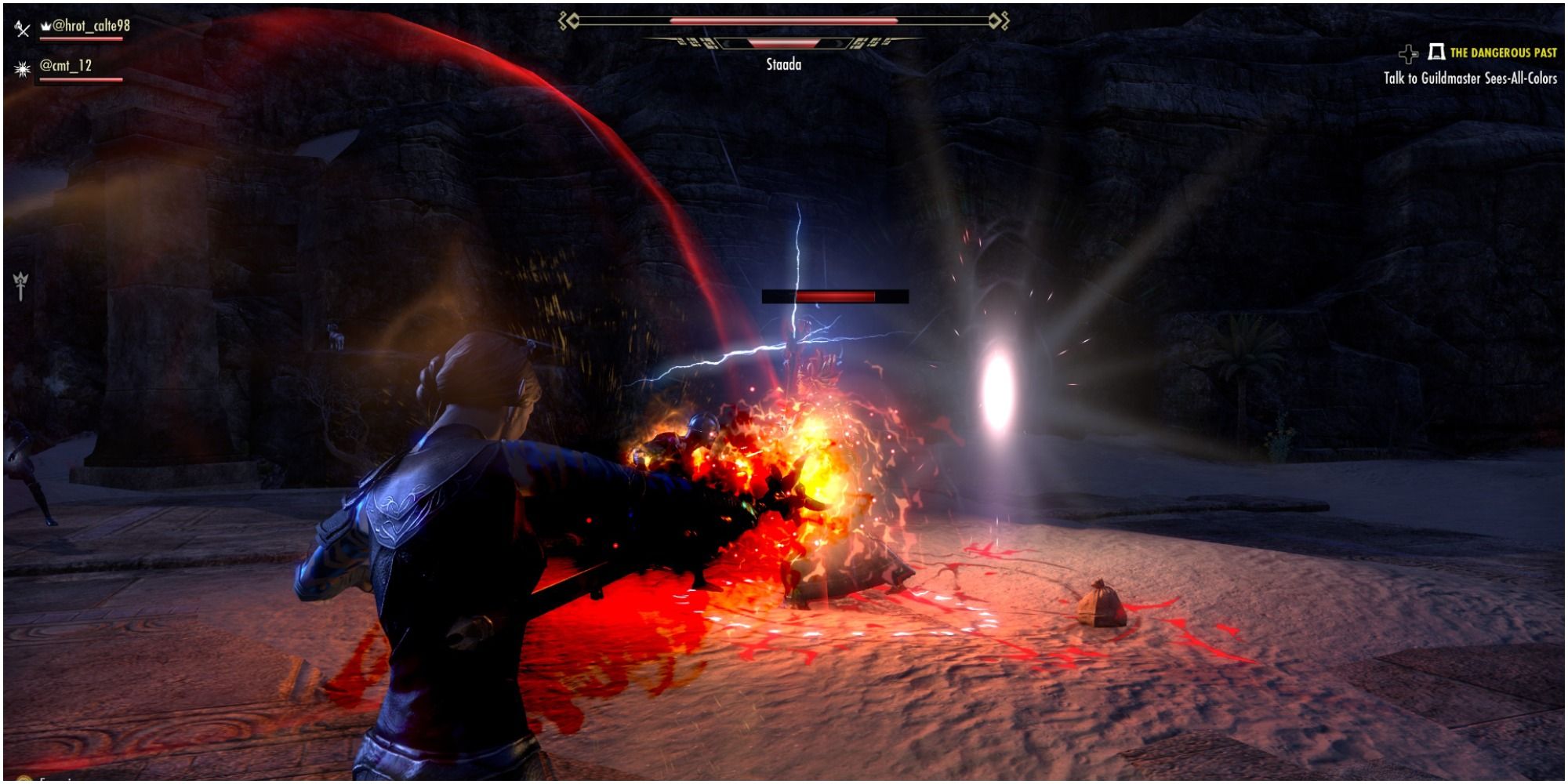 Found in Lesser Circle, you will find Staada standing in the centre of the summoning circle since she belongs to Sheogorath's Shivering Isles. The good thing about Golden Saint Staada is that she does not call for backup during the entirety of the fight.

However, Golden Saint Staada is the definition of a heavy-hitter strength build. With her mighty thundermaul, it'll be handy to have a ranged weapon at hand or are simply play as a mage. She does AoE damage when she inflicts her 'Shock Aura' attack within her summoning circle, so it is best to attack her from the outside. 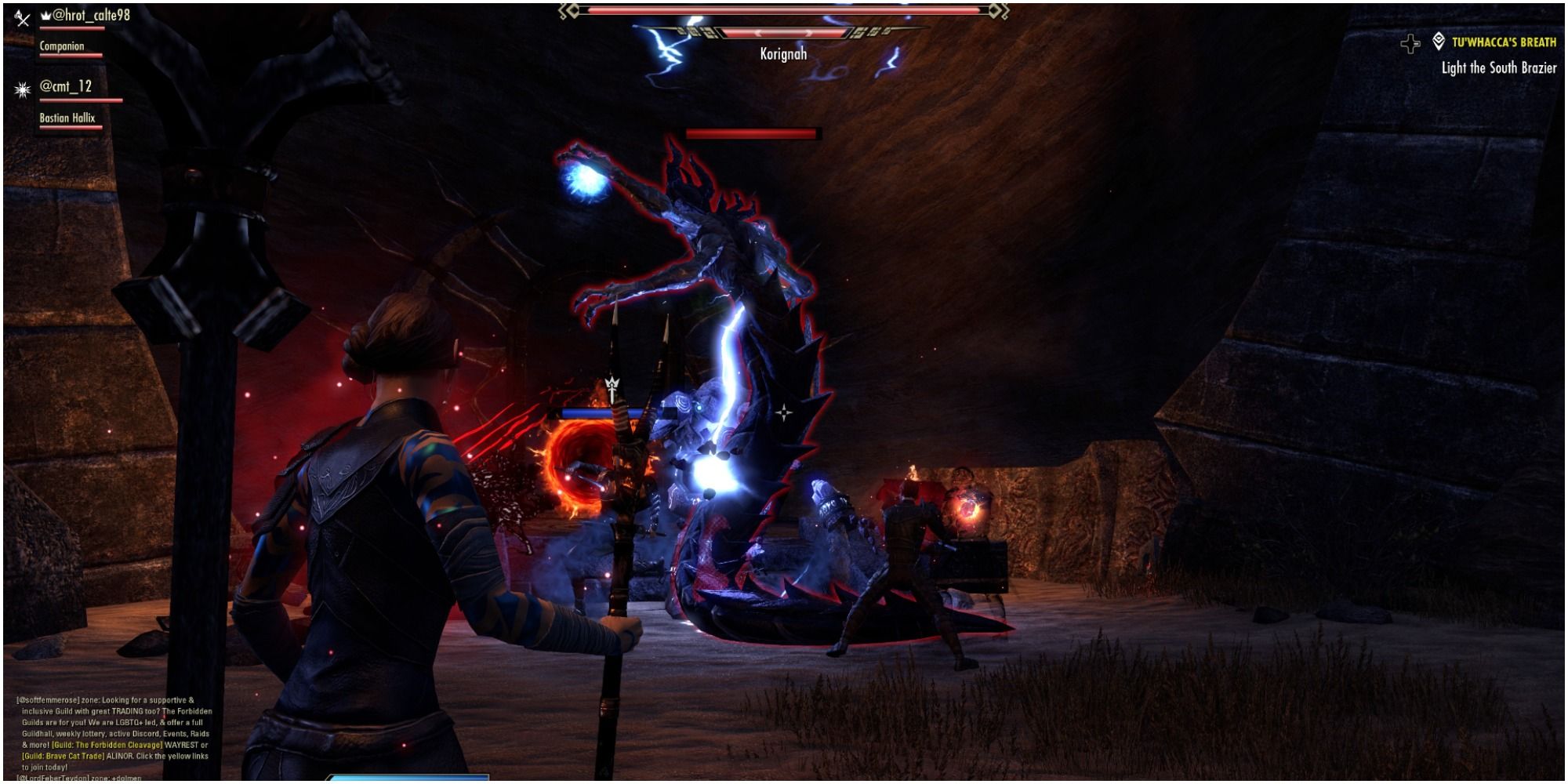 Looking both majestic and terrifying at once, the four-armed human-serpent hybrid Korignah is a worthy foe to clash swords with. One of Daedric Prince Molag Bal's Harvesters, expect arcane attacks and the occasional swipe from her sharp talons when you get too close.

Found in the dark and gloomy Forsaken Hearts Cave, Korignah sends bolts of magical energy toward you. She also hurls lightning projectiles that travel along the ground and can deal significant damage, almost halving your health bar. What's more, she can siphon your life force from you – watch out for that one if you don't want to prolong the fight. 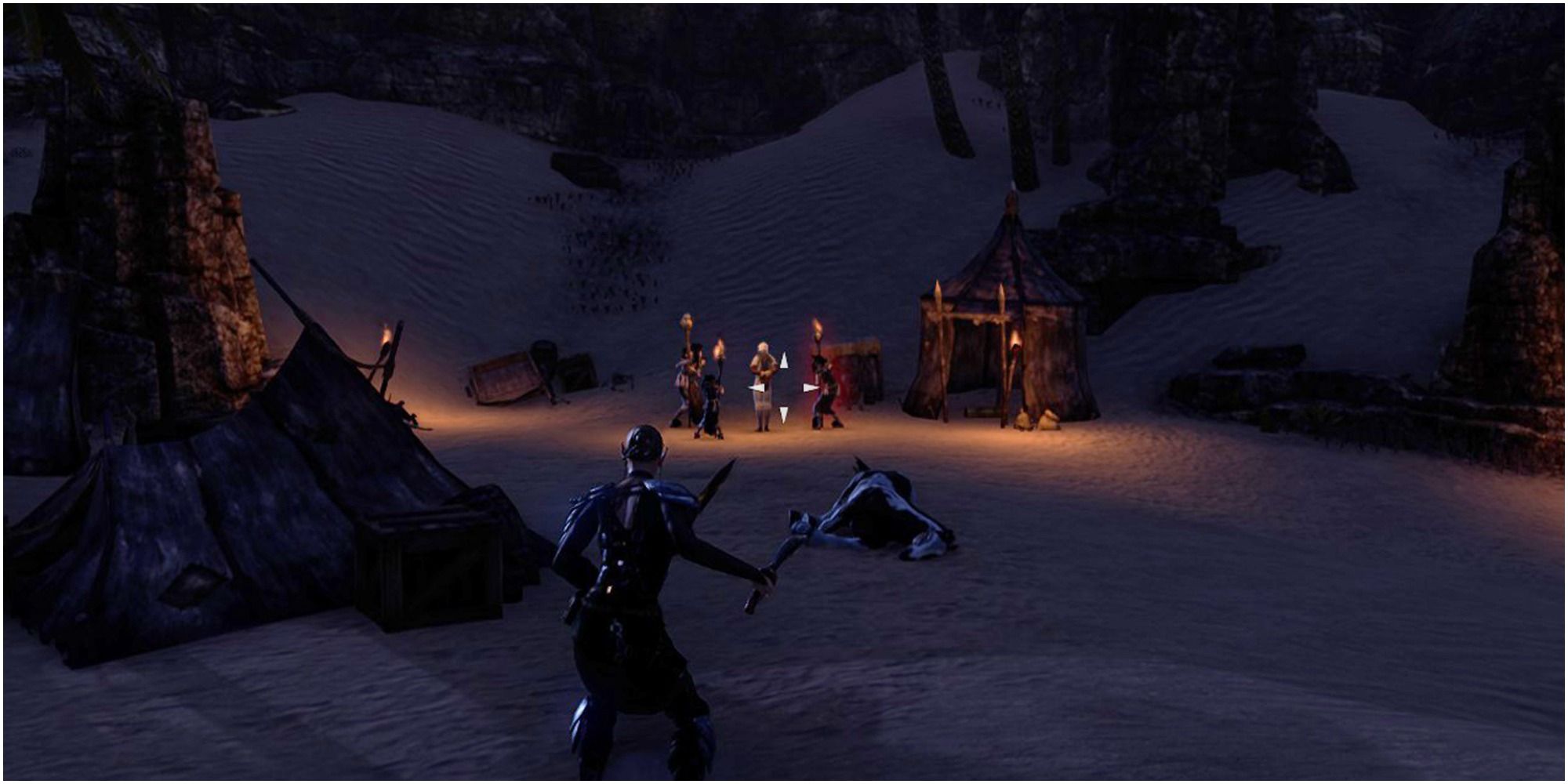 The malicious Hag sisters of Hag Camp have taken a local hostage, and it is up to you to defeat them and rescue the victim. Consisting of Ukha, Igazkad, and Orochar, these sisters are aggressive, meting out relentless magical attacks and melee damage.

But most of the time, these trio hags simply try to club you with their massive wooden club-slash-staves. Like Korignah, these hag sisters can inflict arcane damage that gradually drains your HP, so keep an eye on your health bar. Also, if you are a mage, watch out for those cloudy shields that they put on occasionally throughout the fight, as they have the ability to bounce off any spells you cast. Having a melee fighter in your group for these moments is recommended. 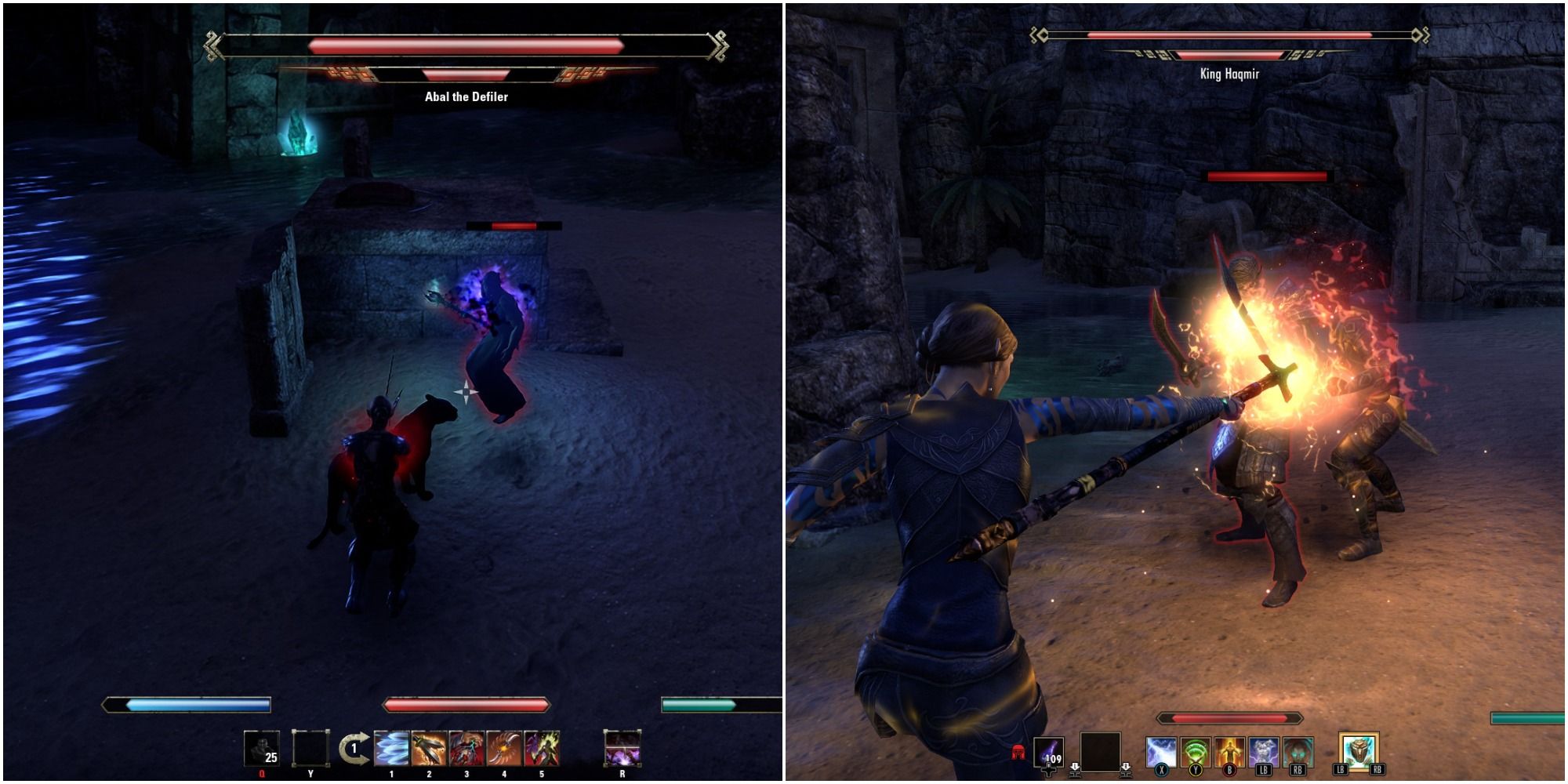 Abal the Defiler is a necromancer boss who has been doing some fishy things at King's Rest, the final resting place of Yokudan kings. He has summoned the spirits of King Haqmir and King Sameer, who become hostile and back him up during the fight.

While the two kings are mainly melee fighters, Abal the Defiler, of course, uses magical attacks and can even heal the two kings, something that is infinitely annoying. Throughout the fight, he summons more undead and attacks with your basic magical projectiles. When it comes to fighting this boss, it is his summons that make the fight challenging, but Abal himself hasn't much when it comes to defensive capabilities. 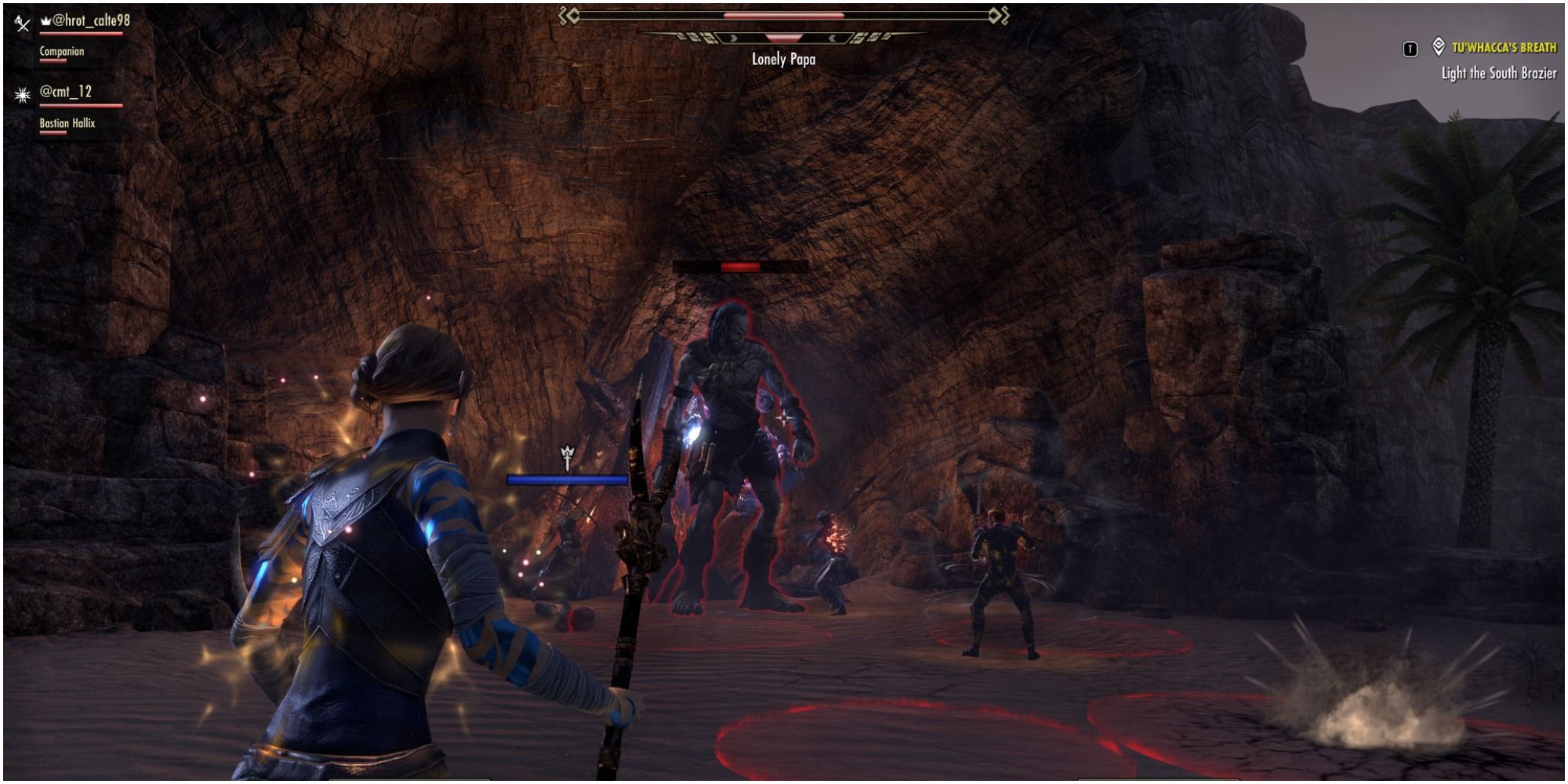 If you remember being punted into the sky by one of the many giants in Skyrim, then you would understand why it is a struggle to put one down for a non-Dragonborn protagonist. Known as Lonely Papa, this giant can be found in the aptly named Giant Camp in the centre of Alik'r Desert – he is the lone resident of his humble camp.

Lonely Papa is, naturally, an impenetrable tank with a hefty health bar to match. Being as tiny ants compared to him, he will stomp his foot at you, which releases an extremely damaging shockwave. And don't forget about his club, as one swing can halve your health bar if you are not careful. This boss fight is going to take a while, so be patient and slowly wear him down.

The Top 25 Diamond and Pearl Pokémon